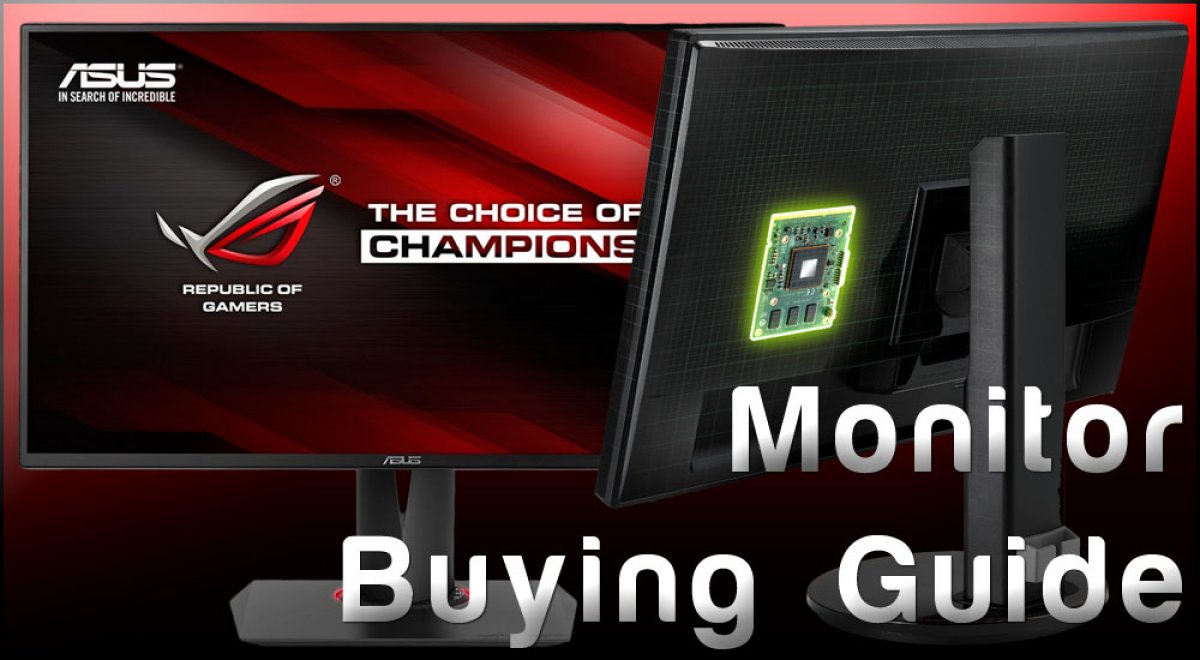 Every PC component contributes to the gaming or working experience. A mouse, keyboard, GPU, CPU, RAM, and monitor all fuse to create the total user experience, but they’re all fairly stable and easy to understand.

Monitors can be tricky. Their specs often include lesser-known terms like “response time,” “input lag,” and “contrast ratio,” not to mention the various panel types behind the display. For those mystified by these specs, or those simply wanting a handy guide to monitor sales during Black Friday & Cyber Monday, we’ve compiled a list of G-Sync, FreeSync, and general use 1080p, 1440p, and 4K monitors.

This list details the best monitors for gaming at budget, mid-range, and high-end prices, scaling all the way up to 144Hz. We’ve got a few “general use” monitors in here for those just seeking 1080p functionality without the flair. 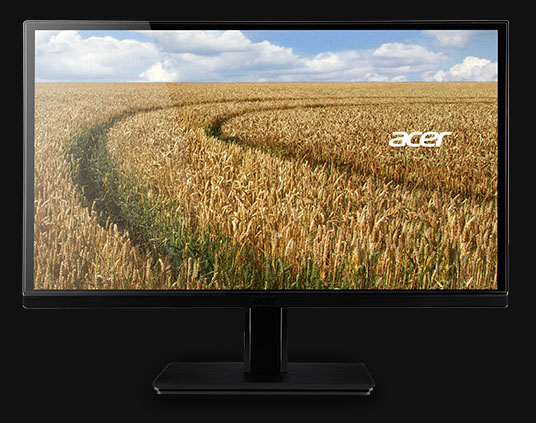 Acer H226HQL ($130): For those who play slower-paced games, like CIV, a high-end 144Hz monitor isn’t as important as it may be for someone playing competitive CS:GO. For our budget 1080p general use monitor, we’ve chosen the 21.5” Acer H226HQL. The Acer H226HQL is a 1920x1080p (16:9 aspect ratio) resolution display with a 5ms response time, LED backlight, 60Hz refresh, and an IPS panel. The IPS panel helps to reduce any color distortion from looking at an angle, and generally provides better colors than TN panels. The 5ms response time, LED backlighting, and 60Hz refresh rate are all fairly standard, and will generally be fine for non-competitive gaming. The Acer H226HQL is available for $130 at Amazon, making it a good choice for those looking for a basic 1080p monitor. 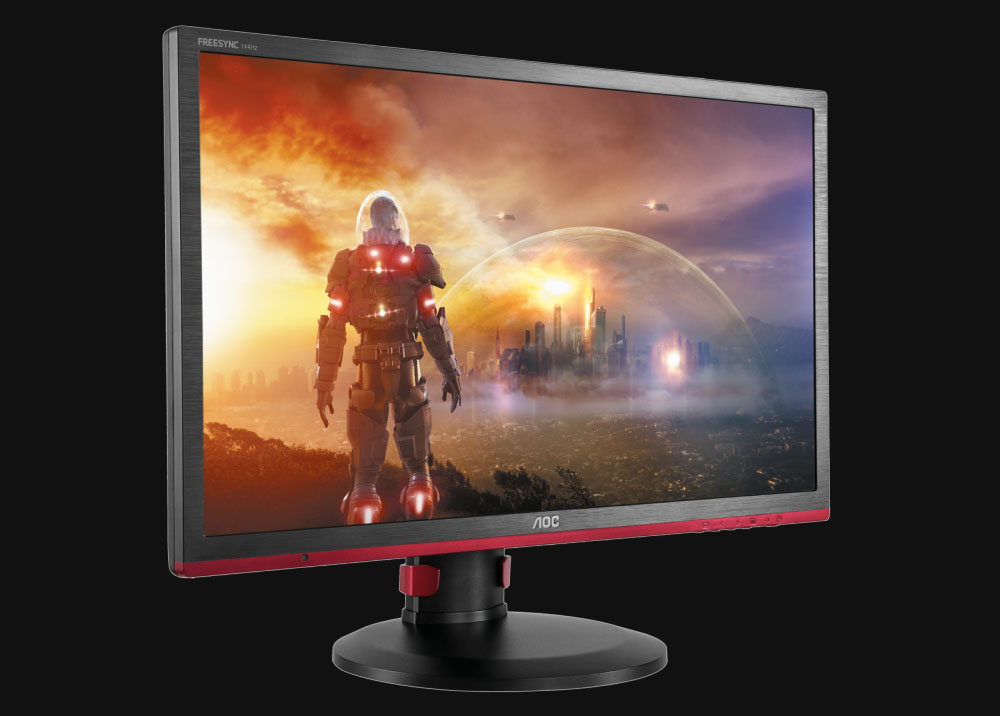 AOC G2460PF ($260): There are currently only two 1080p FreeSync monitors. Of these, the 24” AOC G2460PF is our recommendation. AOC’s G2460PF display is a TN monitor featuring FreeSync and a 1ms response time. FreeSync is similar to G-Sync in that it eliminates both tearing and stutter by slaving the display to the GPU. Unlike G-Sync, FreeSync’s range varies from monitor to monitor. Fortunately, the range of the 1920x1080 AOC G2460PF is 35Hz to 144Hz. The high-end of 144Hz refresh allows for high framerates without sacrificing image fidelity or smoothness; the frequency maximum and 1ms response time make the G2460PF a good choice for gaming. The TN panel – what’s generally present in 144Hz monitors – means that colors and viewing angles will be worse than IPS-type panels. The AOC G2460PF has an LED backlight, FreeSync, and common inputs like HDMI and DisplayPort. Currently, AOC’s G2460PF is available for $260, making it our main 1080p suggestion for those wanting a gaming-oriented, 144Hz monitor. 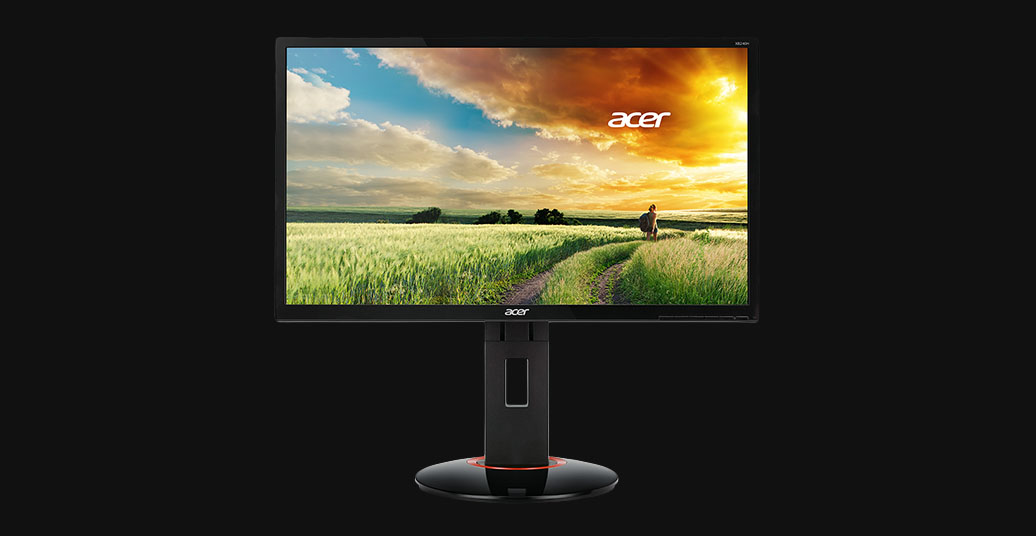 Acer XB240H ($385): For those wanting a G-Sync, 1080p, 144Hz monitor, there are more options than with FreeSync, though they generally are more expensive. This being said, G-Sync is the only variable refresh rate technology currently on nVidia GPUs (AMD has FreeSync), and G-Sync will continue to work even at lower frame rates like 20 FPS, although at that point the experience isn’t going to be as pleasant. For our 144Hz G-Sync choice at 1080p, we’ve picked out the 24” Acer XB240H ABPR. The Acer XB240H is an LED backlit, 144Hz TN monitor with a 1ms response time. G-Sync (like FreeSync) only works over DisplayPort, so the Acer XB240H only supports DisplayPort input. As usual, this 144Hz monitor uses a TN panel, so it will have the standard disadvantages of TN panels -- mostly poor viewing angles and mediocre colors. Despite slight downsides, at $385, the Acer XB240H is a good choice for those wanting a 1080p G-Sync monitor for gaming. 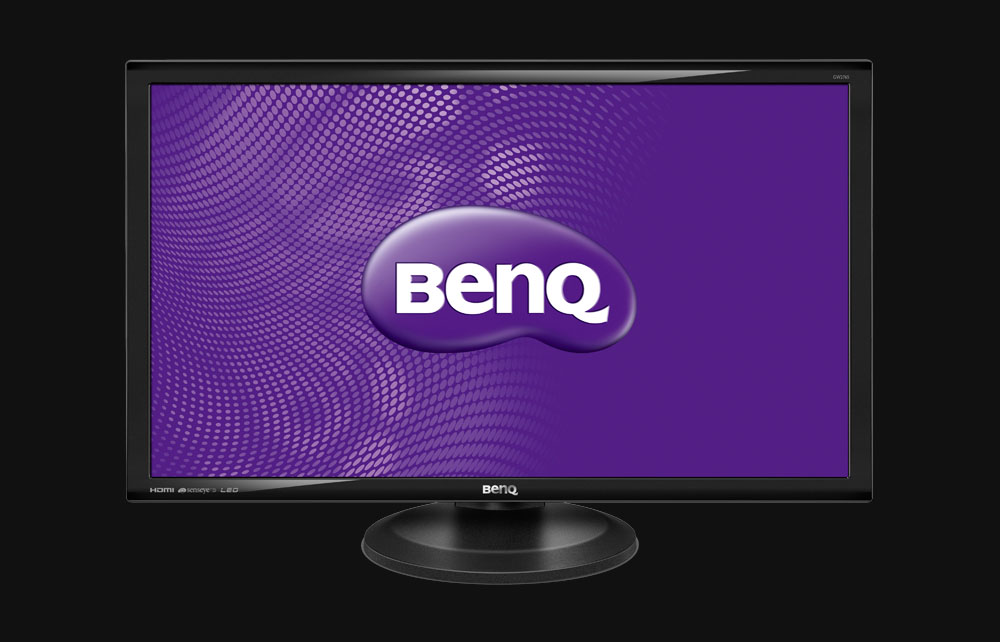 BenQ GW2765HT ($350): 4K is gaining popularity, but it’s still challenging for GPUs to play 4K at high settings and reasonable FPS. For those seeking an upgrade from 1080p, but don’t want a 4K monitor, 1440p is a solid middleground. 1440p provides more workspace compared to 1080p, is less demanding on the GPU (but has become playable), and provides greater picture quality. A good, budget 1440p monitor is the BenQ GW2765HT. The 27” BenQ GW2765HT has a response time of 4ms, refresh rate of 60Hz, and a diverse array of inputs that includes DVI, HDMI, and DisplayPort. It is also an IPS panel, which as a whole have better colors and superior viewing angles. Ultimately, the BenQ GW2765HT is a good general use budget 1440p monitor at $350. 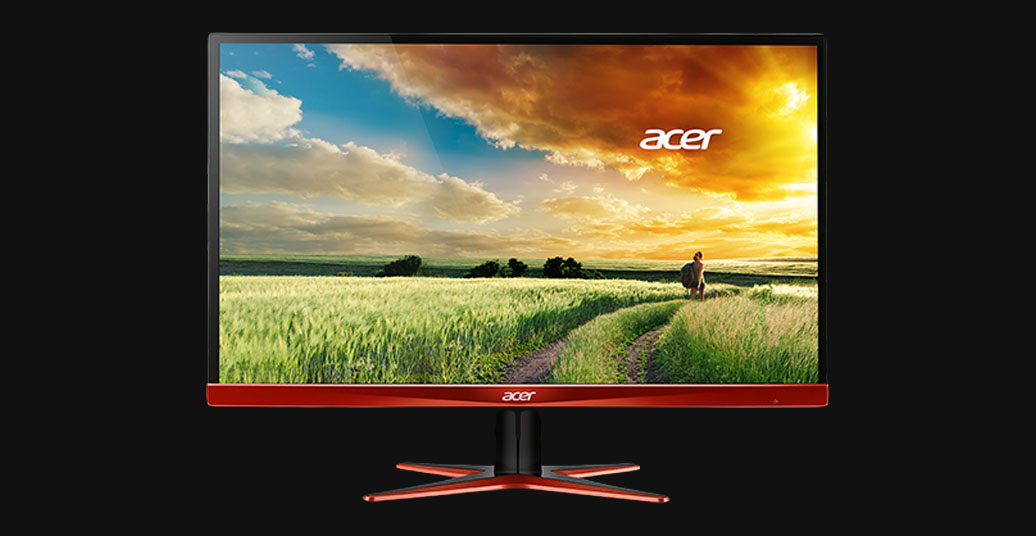 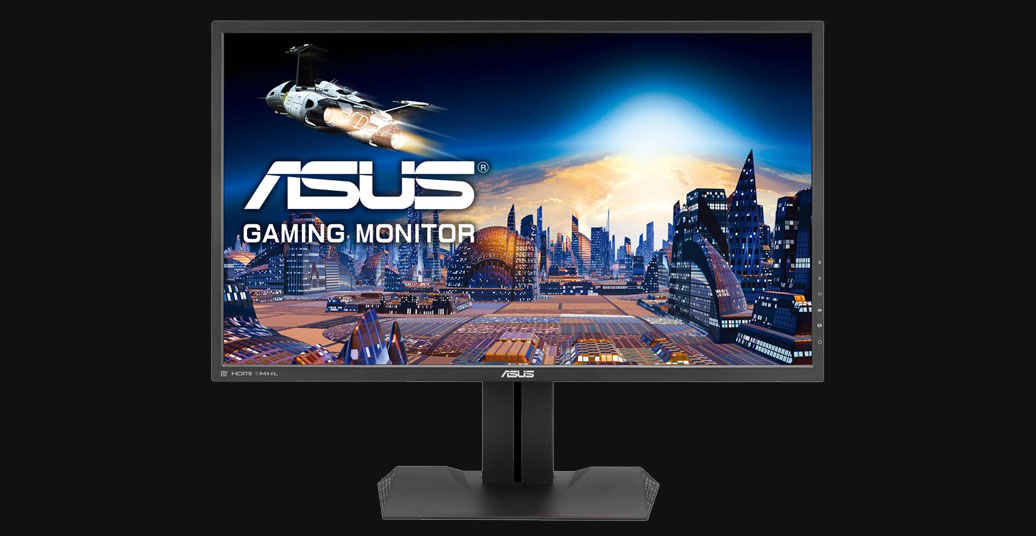 ASUS MG279Q ($550): TN panels have practically become a standard in high refresh rate monitors. That is, until recently. Multiple 144Hz IPS monitors have come out in the past year, allowing for high refresh rates coupled with better colors and viewing angles than TN panels. The 27” Asus MG279Q is an IPS FreeSync 144Hz monitor. Its FreeSync range is unfortunately only from 35-90Hz, although this is still a higher refresh rate than other 1440p IPS FreeSync options. The Asus MG279Q also has a response time of 4ms. Overall, for $550, the Asus MG279Q is a good contender for a gaming-oriented IPS monitor; one which, compared to its competitors, has the unique features of 60Hz+, IPS, and FreeSync. 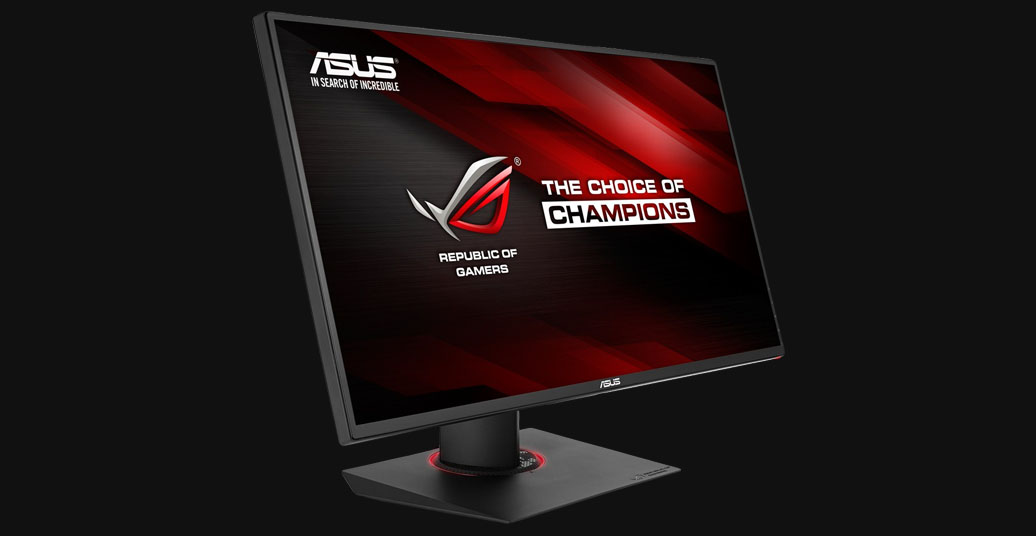 ASUS ROG PG278Q ($550): This is one of the monitors we use in GN’s graphics lab. For our 1440p 144Hz G-Sync monitor, we’ve selected the Asus ROG PG278Q, more commonly known as the Asus ROG Swift. This 27” monitor has a 144Hz refresh rate, 1ms response time, LED backlight, G-Sync capability, and a single DisplayPort input. Due to its TN panel, its colors and viewing angles will suffer slightly. Despite this, G-Sync and a fast response time make the Asus ROG PG278Q a solid choice at $550 for those with an nVidia GPU who are looking for a mid-range to high-end 1440p G-Sync monitor. 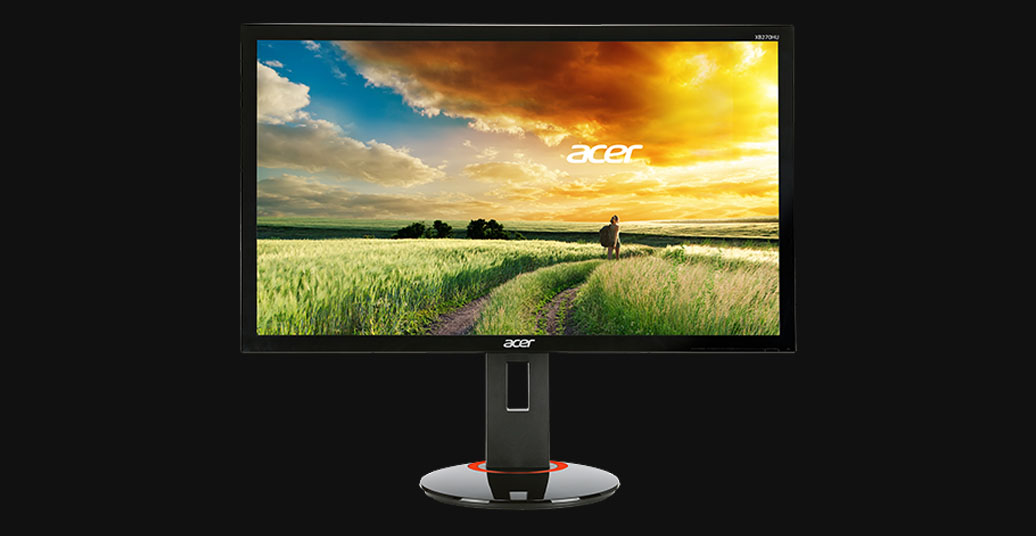 Acer XB270HU ($710): Once again, we’re beginning to see 144Hz IPS monitors -- an exciting development for display tech. For the 144Hz G-Sync IPS gaming monitor, we’ve chosen the Acer XB270HU. Once again, this unit is unique in its packaging of three big features: 144Hz, IPS panel, and G-Sync. As with many IPS panels, its response time is slightly higher than TN at 4ms (where comparable TN can be as low as 1ms). As with other G-Sync displays, the Acer XB270HU only supports DisplayPort input. Despite the high price tag of $710, the Acer XB270HU is a uniquely good choice for those wanting a high-refresh rate IPS G-Sync monitor. 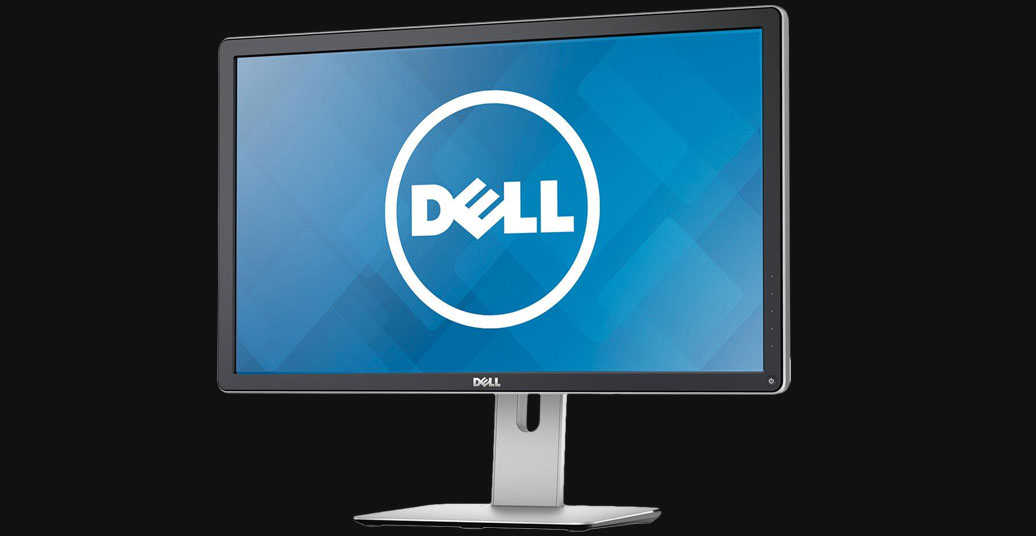 Dell P2415Q ($410): 4K may be demanding on a GPU, but it allows more space for working and can enhance gaming experiences for those willing to pay for the graphics horsepower required for 4K. For our general use, “budget” 4K monitor, we’ve chosen the 24” Dell P2415Q. The Dell P2415Q is an LED-backlit, IPS, 60Hz monitor with a response time of 8ms. While only 60Hz and an 8ms response time (especially) aren’t exceptional for gaming, it’ll do fine for casual, non-competitive gaming and everyday work. The P2415Q has 3xDisplayPort, 1xHDMI, and 1xmini DisplayPort. DisplayPort is required to run at 60Hz. At its price of $410, the Dell P415Q is a good choice for a general use and budget-friendly 4K monitor. 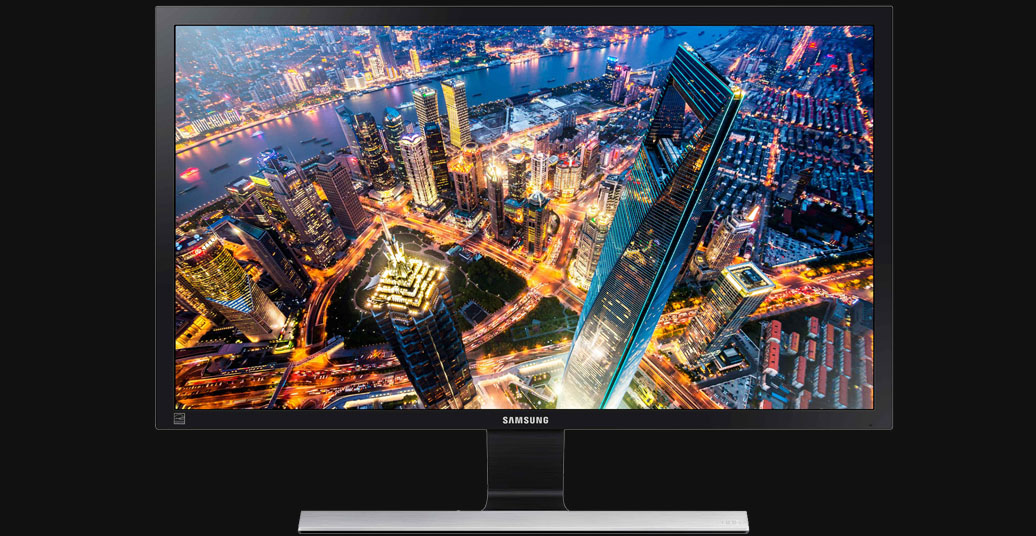 Samsung U28E590D ($480): While FreeSync and G-Sync are becoming more common, they aren’t as common in 4K monitors as they are in 1440p or 1080p displays. Even without a lot of options, the 28” Samsung U28E590D is a good choice for gamers wanting a 4K monitor. It uses a TN panel, a 60Hz refresh (there currently aren’t any 4K monitors above 60Hz), a 1ms response time, and a FreeSync range of 40-60Hz. The FreeSync range of 40-60Hz isn’t as wide as it optimally would be, as frame rates above 35FPS aren’t entirely unplayable; FreeSync covering that range would be preferred. FreeSync and the 1ms response time make the Samsung U28E590D a good choice for 4K FreeSync gaming at $480. 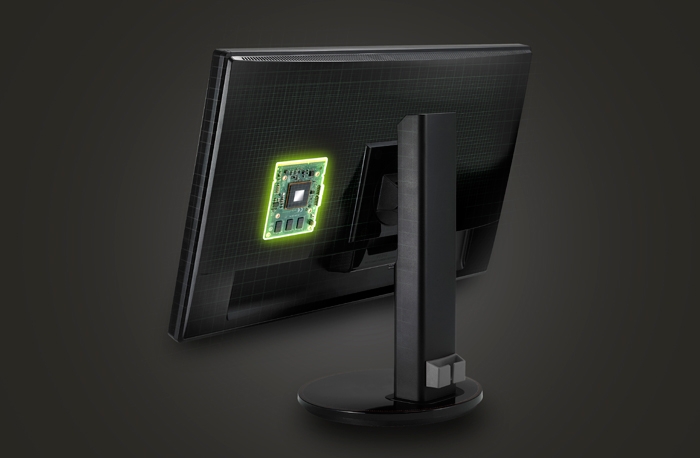 ACER XB280HK ($680): This is one of the monitors we use in GN’s graphics lab. As with 4K FreeSync monitors, there currently aren’t many 4K G-Sync monitors. That being said, for those with an nVidia GPU who want a G-Sync 4K monitor for gaming, we suggest the Acer XB280HK. The 28” Acer XB280HK has a 60Hz refresh rate, a 1ms response time, nVidia G-Sync, and 5xUSB 3.0 ports. Like other G-Sync monitors, it only has 1xDisplayPort input since G-Sync only functions using DisplayPort. Overall, at the high price of $680, the Acer XB280HK fits the bill for a 4K G-Sync gaming oriented monitor.

That’s all for this round-up! Some good Black Friday and Cyber Monday sales are either in effect or soon will be, making it a buyer’s market right now.