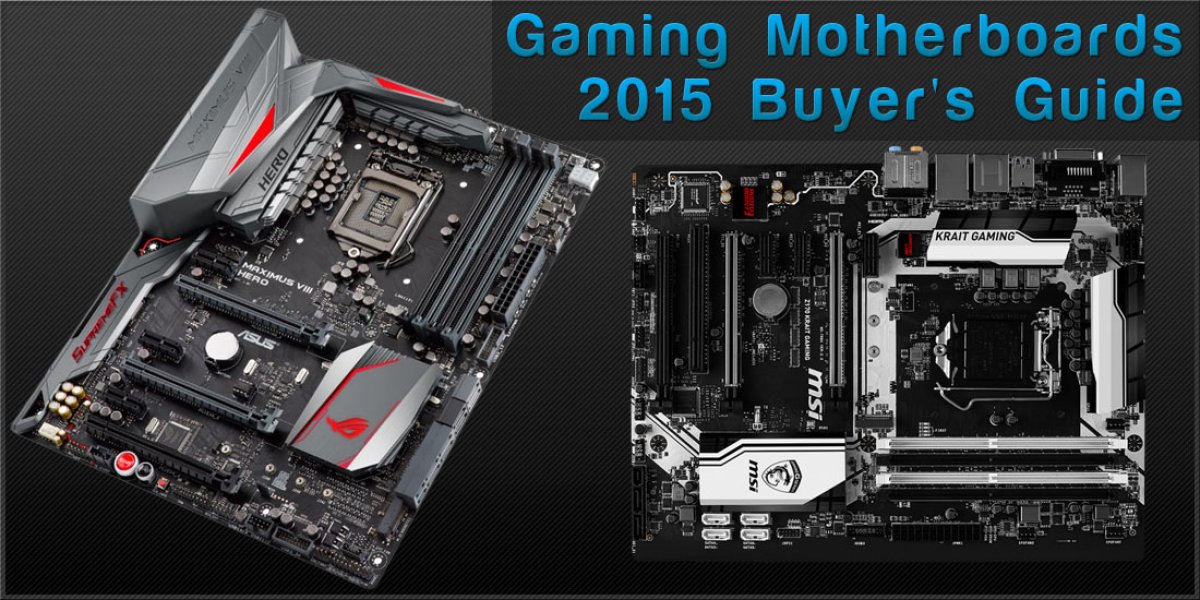 Some PC parts -- CPUs and GPUs -- have tangible benefits: x FPS gained, double-precision performance increased, loading times halved, or similar. Other parts, like PSUs and motherboards, may not have as obvious of advantages. These components are necessary and important parts of a PC, and choosing well enables everything else in the system. For those confused or simply wanting a guide, we occasionally create lists of components – like motherboards – for different needs.

With Black Friday and Cyber Monday fast approaching, we thought it might be helpful to come up with a gaming motherboard buyer’s guide for overclocking and non-overclocking boards. Anyone curious about the specific differences between the Skylake chipsets, check out our coverage here.

This is the Intel-only version of our guide. Another motherboards guide will look separately at AMD's FM2+ motherboards. 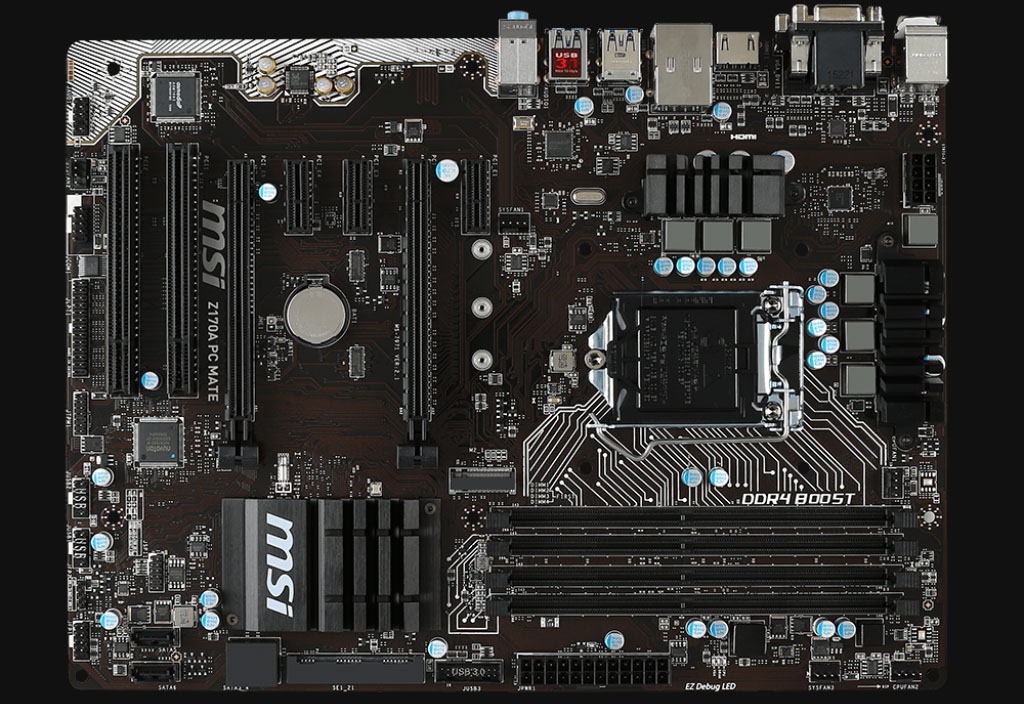 MSI Z170A PC Mate ($90): Let’s face it, sometimes we want to overclock, but our wallets may not always fond of the prices of high-end motherboards. In this case, the MSI Z170A PC Mate is an entry-level go-to. The board has a 6-phase, heatsinked CPU VRM for overclocking. UEFI overclocking tools are more limited than on the higher-end boards, but provide beginners a place to start playing with voltage and frequency. Like other ATX Z170 motherboards, the PC Mate has 4xDDR4 slots with support up to DDR4-3200. It also has 2xPCIe x16 (run at x16/x0, x4/x4), 3xPCIe x1, and 2xPCI slots. For storage, the board has 6xSATA, 1xSATAe, and 1xM.2 slots. The MSI Z170A PC Mate is a good choice at $90, especially for a budget overclocking Z170 motherboard. 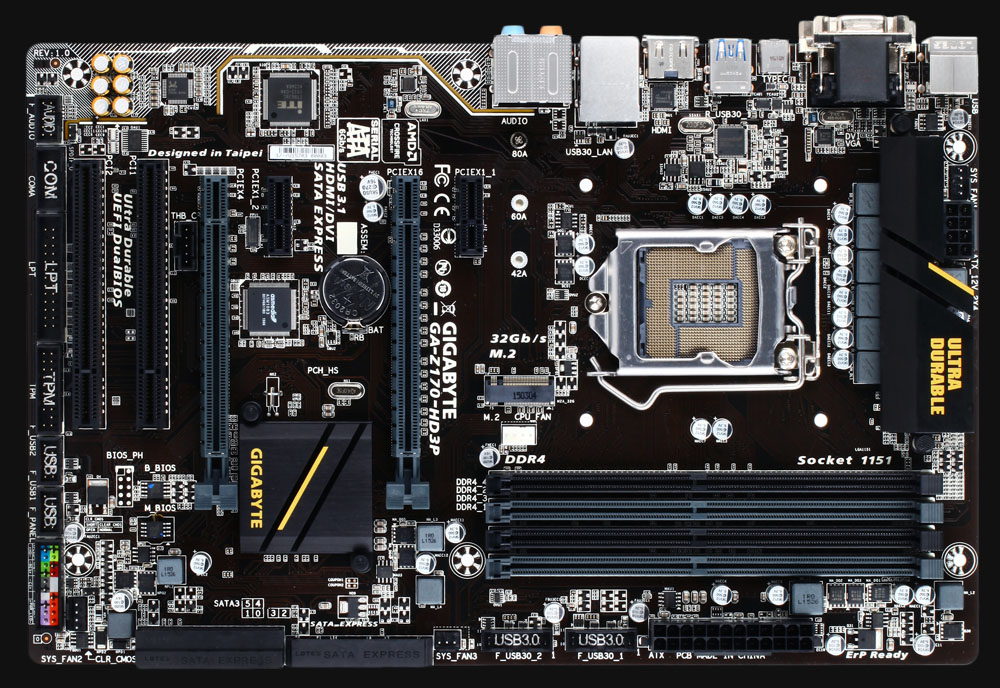 Gigabyte GA-Z170-HD3P ($100): For a slightly higher budget motherboard, we’ve chosen the Gigabyte GA-Z170-HD3P. Budget and mainstream motherboards won’t be winning many overclocking competitions, but they do allow for moderate overclocks. The Gigabyte GA-Z170-HD3P supports 4xDDR4 sticks up to DDR4-3466, which technically supports a maximum capacity of 64GB (though the memory controller will feel the load). There are two PCIe x16 slots (one is wired for x16, the other x4) and 2xPCIe x1 slots, with two legacy PCI slots present. The GA-Z170 HD3P has 6xSATA, 3xSATAe, and 1xM.2 slot for storage. Checking the other specs, we can see that the Z170 HD3P has an 8-phase CPU VRM. The Gigabyte GA Z170 HD3P is available for $100, making it a good option as a mainstream, beginner-to-intermediate Z170 overclocking motherboard. 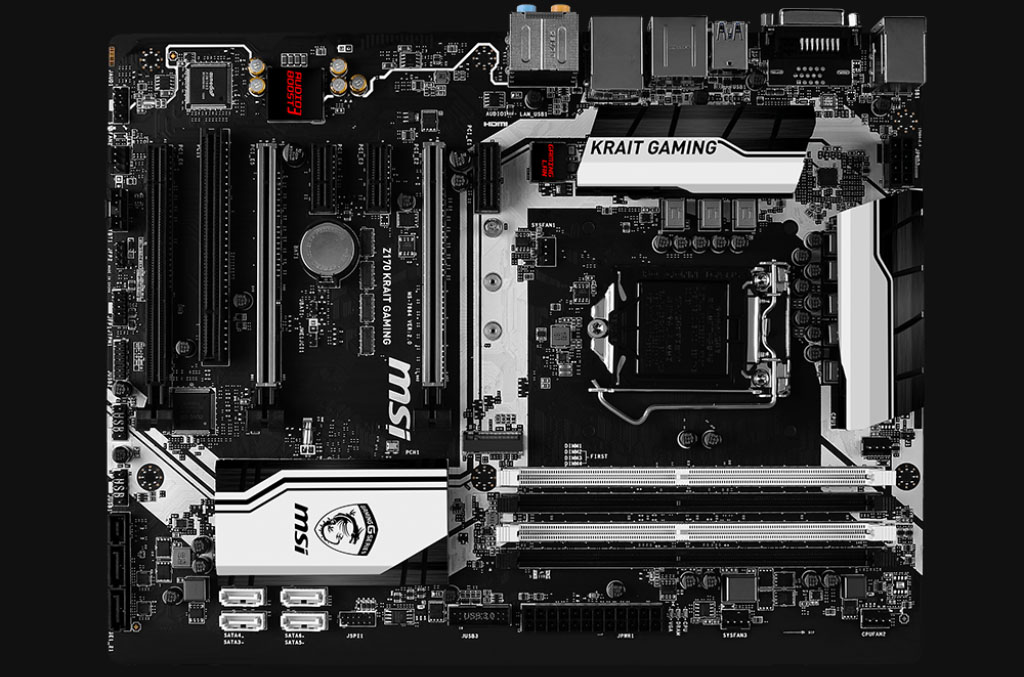 MSI Gaming Z170 Krait GAMING ($135): If willing to spend more on the motherboard, the MSI Gaming Z170 Krait GAMING is a good option. Yes, it has “Gaming” twice in its name (once in CAPS), but the upfront, groan-inducing marketing doesn’t diminish the board’s abilities. As with other Z170 ATX motherboards, it comes with 4xDDR4 slots that support up to DDR4-3600. It has 3xPCIe x16 (supports x16/x0/x4, x8/x8x4), 3xPCIe x1, and 1xPCI slot. Its multiple PCIe x16 slots running at x8 allows for dual-GPU support (SLI requires x8 as a minimum). The MSI Gaming Z170 Krait also supports 4xSATA, 1xSATAe, and 1xM.2 slot. It has an 8-phase CPU VRM and a white / black color scheme, with a more advanced UEFI system for component management. The MSI Z170 Krait Gaming is available for $135. 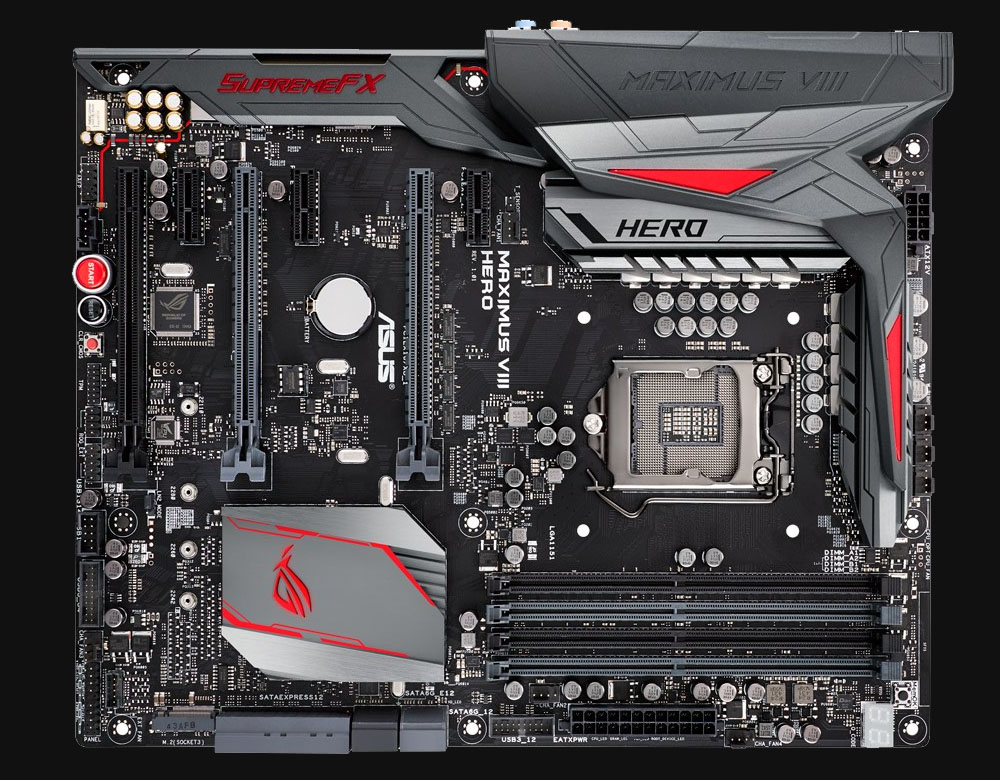 ASUS ROG Z170 Maximus VII Hero ($230): High-end builds generally deserve mid- to high-end motherboards, and for such builds, the Asus Z170 ROG Maximus VII Hero is a top-class choice. The Hero has 4xDDR4 slots with support for DDR4-3733 RAM, support for dual GPUs at x8/x8 with 3xPCIe x16 slots (runs at x16 when only one GPU is present, with the third PCIe x16 slot running at a max of x4. The Asus ROG Maximus VII Hero has 8xSATA, 2xSATAe, and 1xM.2 slot. A 10-phase CPU VRM allows for clean voltage delivery and reduced vDroop with more powerful overclocks, aided by an advanced UEFI with tertiary memory timings and low-level CPU tuning. The Asus Z170 ROG Maximus VII Hero is available for $230, making it an upper-tier (and expensive) choice. 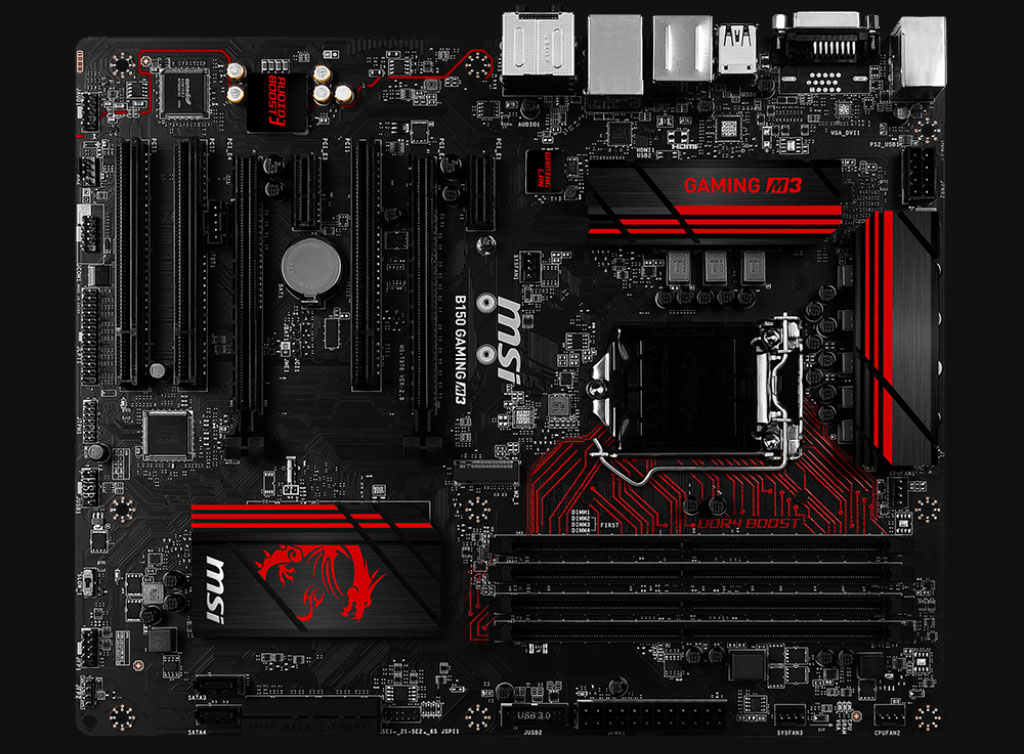 MSI Gaming B150 M3 ($90): The B150 chipset wasn’t originally intended for use in gaming builds, but some have the right features and price-point to use for a non-overclocking motherboard. The MSI Gaming B150 M3 is fairly basic with 4xDDR4 (official support up to 2133MHz), 2xPCIe x16, 2xPCIe x1, and 3xPCI slots. The PCI slots are present for form factor purposes and for business systems that sometimes require legacy support. For storage, the B150 M3 has 6xSATA, 1xSATAe, and 1xM.2 slot. It’s available for $90, making MSI’s Gaming B150 M3 a good choice for a non-overclocking, cheaper, more mainstream motherboard. You can read our review of another B150 motherboard here. 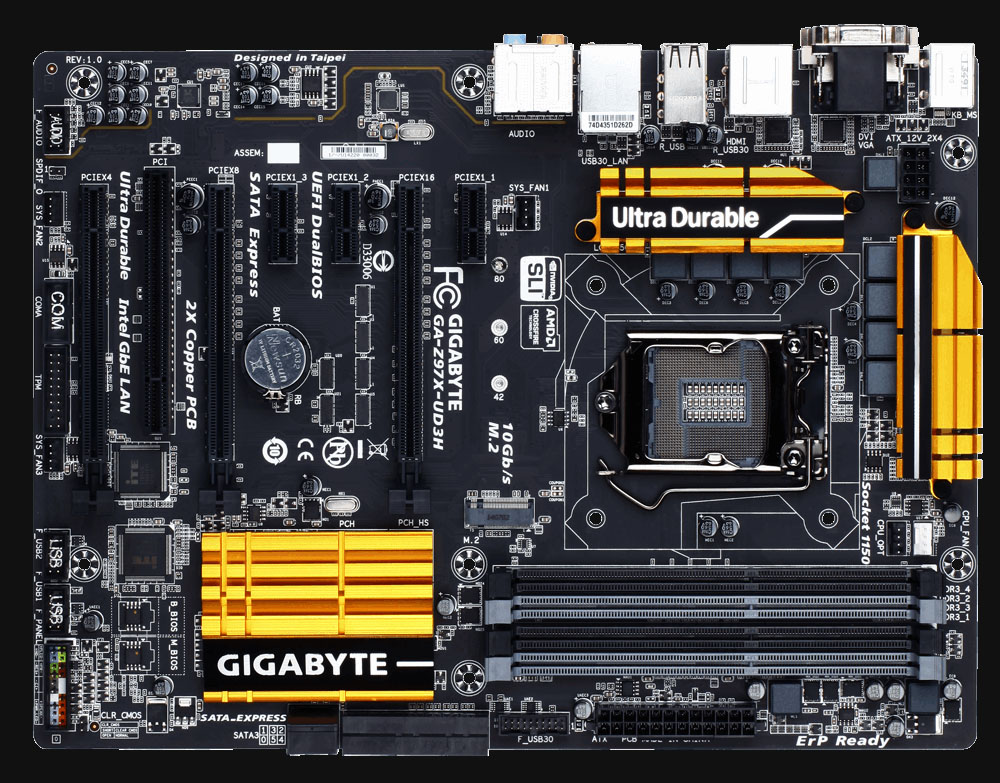 Gigabyte Z97X-UD3H ($125): Though Skylake is out, a lot of us still have Haswell (or Broadwell) CPUs, or simply may catch a good deal on one with Cyber Monday and Black Friday coming up. Besides, the 4690K and 4790K are still good gaming CPUs. We’ve included the Gigabyte Z97X-UD3H as our Z97 overclocking motherboard for the mainstream users. Memory support scales to DDR3-3100 with four slots. Dual-GPU setups are enabled with 3xPCIe x16 slots, with two GPUs (in the top two slots) running at x8 speed. The third PCIe slot is 2.0 and will run at x4 speed. The Z97X-UD3H has 6xSATA, 1xSATAe, and 1xM.2 ports for storage. For overclocking, an 8-phase CPU VRM is present with moderate control through UEFI. The Gigabyte Z97X-UD3H is currently available for $125. 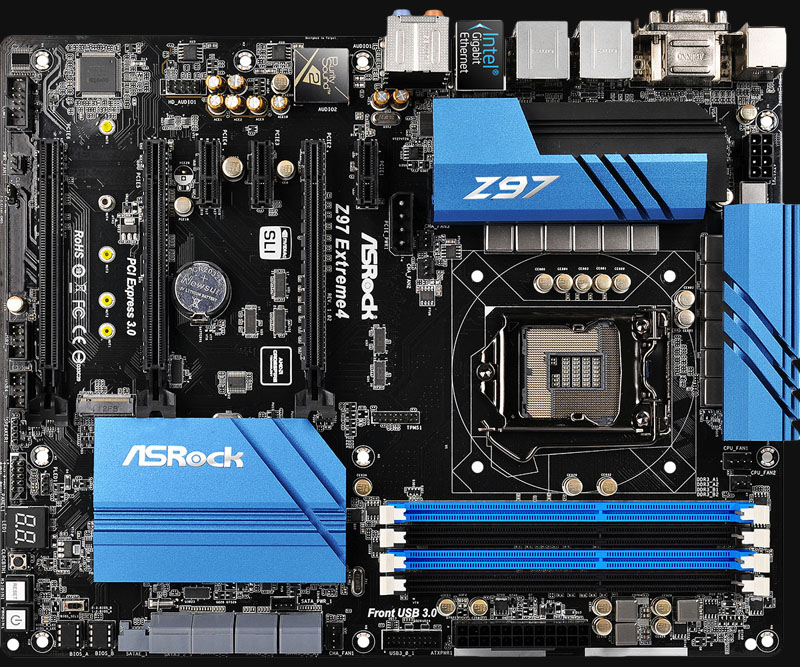 Asrock Z97 Extreme4/3.1 ($168): The Asrock Z97 Extreme4/3.1 is a Z97 overclocking motherboard slated to fill the mid-range to high-end gap. The Extreme4 features 4xDDR3 slots with support of DDR3-3200+. For GPUs (or other add-in cards), the board hosts 3xPCIe x16 slots, allowing it to support dual-GPU setups with x8/x8 speeds. Support for nVidia Quad-SLI and AMD 3-Way CrossFireX are also listed as supported items. 3xPCIe x1 slots (2.0, not 3.0) are available for expansion cards and capture devices. For storage, Asrock’s Z97 Extreme4/3.1 also supports 8xSATA, 1xSATAe, and an M.2 slot; the “/3.1” extension represents an included USB3.1 expansion card, mounted in a PCI-e slot for the faster USB3.1 interface. For CPU overclocking, a 12-phase CPU VRM and advanced UEFI, including some notation abilities (that we love), will allow most CPUs to achieve higher-frequency overclocks. The Asrock Z97 Extreme 4/3.1 is available currently for $168. 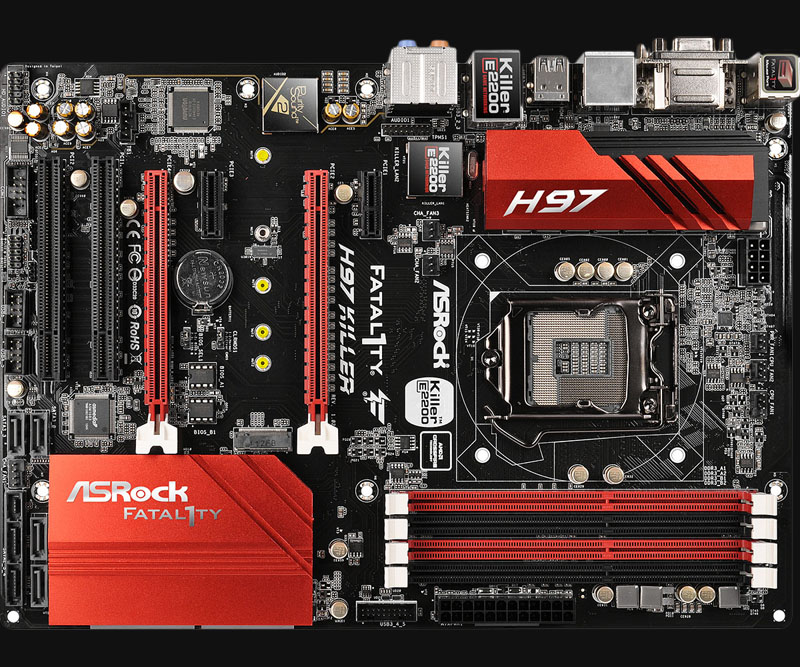 That’s it for our Black Friday, Cyber Monday, and “upcoming winter holidays” motherboard roundup. Be sure to watch out for good deals in the upcoming days and weeks, as they generally go quickly.