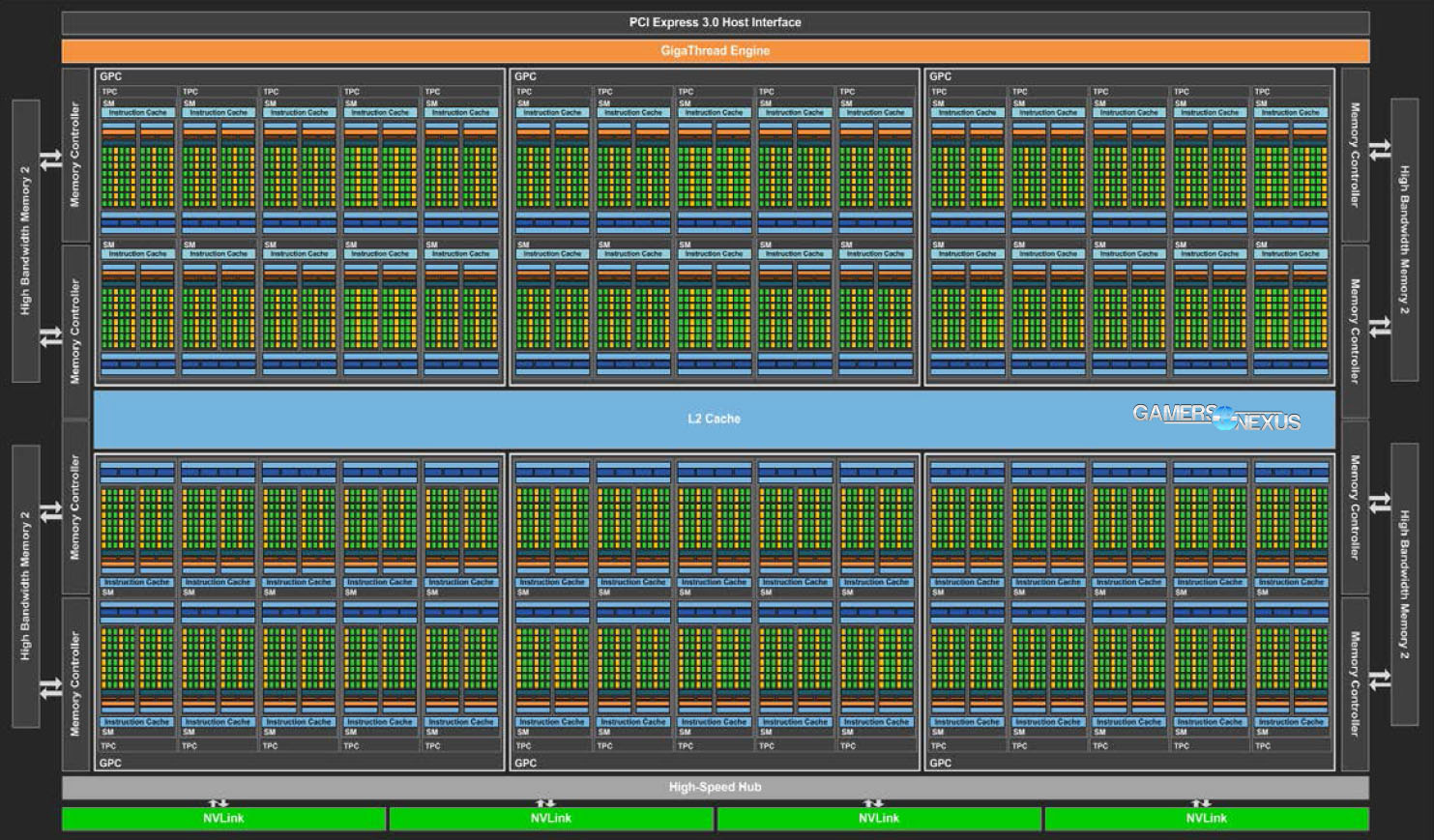 This is the architectural block diagram for the GP100 Pascal chip that was revealed at GTC last month.

GP100 is the largest GPU that nVidia has ever built, and is fabricated by TSMC on a 16nm FinFET process node. That's a major shift from the preceding 28nm process node of currently active gaming architectures from both nVidia and AMD, and it champions an era of reduced wattage and more packed-in transistors. Both items work to better the performance-per-watt “ratio,” a change nVidia began making post-Fermi and that AMD executed with Fiji. The die shrink isn't alone in performance and power consumption improvements, either; a move to FinFET transistors means that power leakage becomes less significant, and marks the EOL for planar FETs in GPUs as all major silicon manufacturers have now transitioned.

FinFET transistors use a three-dimensional design which extrudes a fin to form the drain and source, with the gate encircling the transistor's fins. GP100 has a transistor count of 15.3 billion across its 610mm^2 GPU die size. It's rated for a 300W TDP and offers a staggering 5.3 TFLOPS of FP64 (double-precision) COMPUTE performance and 10.6 TFLOPS of FP32. FP16 is also available natively (21.2 TFLOPS) on GP100 and is more critical than it might sound on paper, something we'll discuss more momentarily.

The Tesla P100 Pascal science-targeted accelerator card (not quite a “graphics card”) hosts a total of 3584 CUDA Cores capable of single-precision FP32 and 1792 CUDA Cores capable of FP64 DP COMPUTE. The full GP100 GPU would host 1920 FP64 cores. The clockrate is natively high, pushing a frequency of 1328MHz base and 1480MHz boosted (stock), and bandwidth is further aided by the new move to HBM2 memory – an absurd speed increase over GDDR5.

Let's start with the graphics processing clusters and streaming multiprocessor (SM) architecture, then get into memory.

Although variants will exist, the GP100 chip we're looking at today (Tesla P100 GPU) is modeled in the above diagram. This chip hosts six Graphics Processing Clusters (GPCs), each of which contains a set of Texture Processing Clusters (TPCs). For every one TPC in Pascal, there are two Streaming Multiprocessors (SMs); in total, there are 60 SMs on GP100, with the Tesla P100 Accelerator hosting 56. This is what an SM looks like in the Pascal architecture: 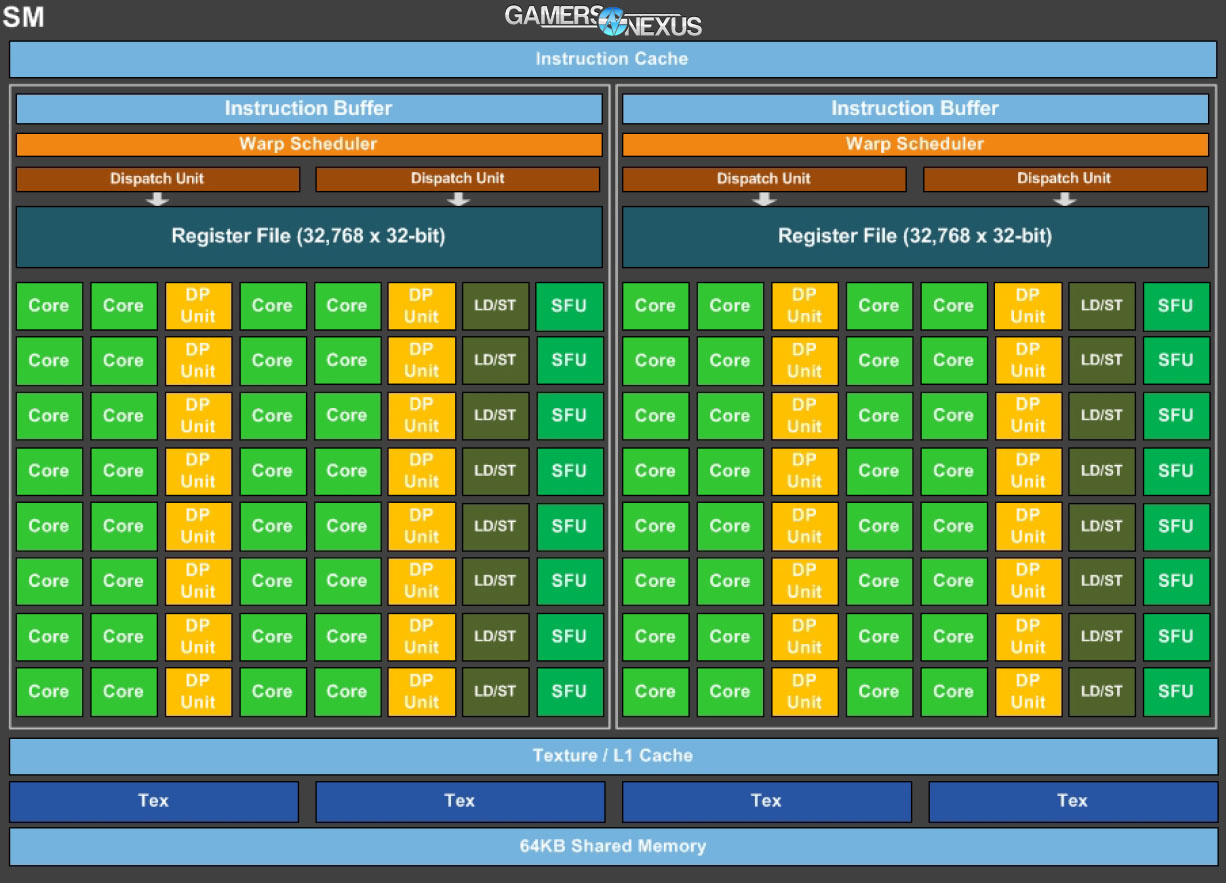 The above SM sample is reproduced ten times per GPC, accompanied by one half that count of TPCs (five per GPC). Each SM contains 64 FP32 single-precision CUDA cores and 32 FP64 cores (half) on a fully-enabled GP100 GPU; this may interest astute readers as being a reduction in total core count per SM versus previous architectures, despite an overall higher per-GPU core count. Maxwell, for instance, ran 128 FP32 CUDA cores per SM, and predecessor Kepler ran 192 FP32 SP CUDA cores per SM. The reduced CUDA core count per SM is because GP100 has been segmented into two sets of 32-core processing blocks, each containing independent instruction buffers, warp schedulers, and dispatch units. There is one warp scheduler and one instruction buffer per 32-core partition. Each partition also contains two, independent dispatch units per (four total per SM), and each partition further contains a 32,768 x 32-bit register file. The SM segments share a single instruction cache, unified texture / L1 Cache, four texture units (TMUs), and one 64KB shared memory block.

Here is the COMPUTE potential of various architectures:

So, even though Pascal has half the cores-per-SM as Maxwell, it's got the same register size and comparable warp and thread count elements; the elements comprising the GPU are more independent in this regard, and better able to divvy workloads efficiently. GP100 is therefore capable of sustaining more active (“in-flight”) threads, warps, and blocks, partially resultant of its increased register access presented to the threads.

Pascal's datapath structure requires less power for data transfer management. Pascal schedules tasks with greater efficiency (and less die space consumed by datapath organization) than Maxwell by dispatching two warp instructions per clock, with one warp scheduled per block (or “partition,” as above).

With four texture units per SM, Pascal GP100 is outfitted with a total of 240 TMUs. A split L1/Texture cache is made available to the SM, explained in the next section.

As for why FP16 matters, it's mostly deep learning. This will only be given cursory coverage as it exits the scope of our gaming-tech website. The native FP16 support and high performance (>21TFLOPS) COMPUTE aids in applications which do not require the accuracy tolerances of double-precision. NVidia explains in official documentation that “deep neural network architectures have a natural resilience to errors due to the backpropagation algorithm used in their training.” FP16 becomes preferable in deep learning use cases, as it requires significantly less memory usage, reduces data transfer, and can improve performance ~2x over FP32.