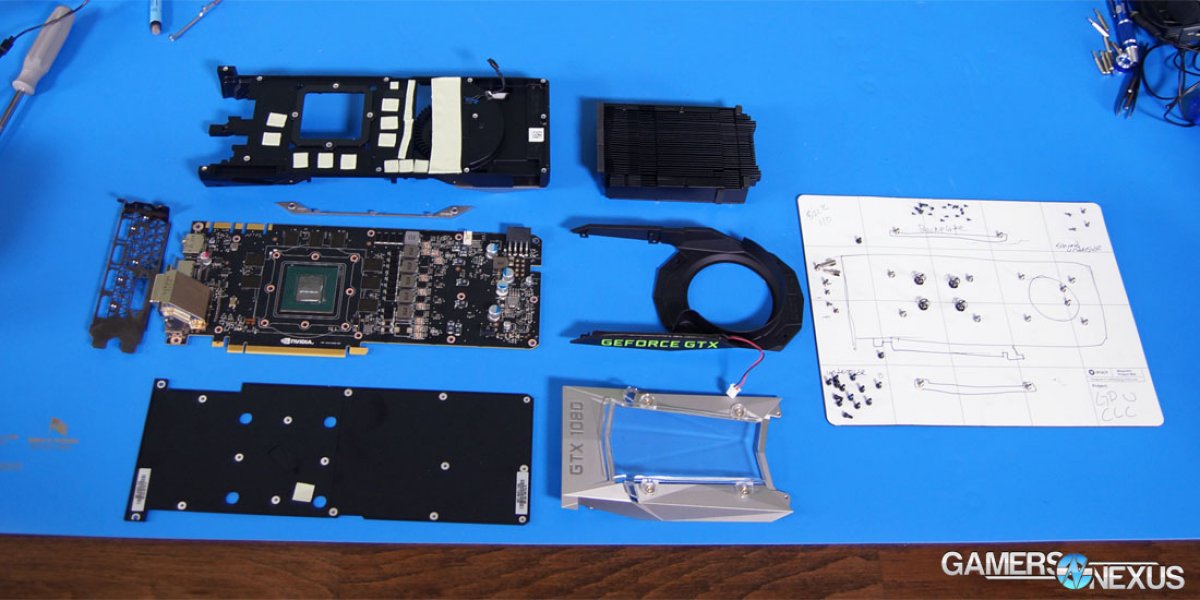 We're building our own GTX 1080 Hybrid. We're impatient, and the potential for further improved clock-rate stability – not that the 1080 isn't already impressively stable – has drawn us toward a DIY solution. For this GTX 1080 liquid cooling mod, we're tearing apart $1300 worth of video cards: (1) the EVGA GTX 980 Ti Hybrid, which long held our Best of Bench award, is being sacrificed to the Pascal gods, and (2) the GTX 1080 Founders Edition shall be torn asunder, subjected to the whims of screwdrivers and liquid cooling.

Here's the deal: We ran a thermal throttle analysis in our 9000-word review of the GTX 1080 (read it!). We discovered that, like Maxwell before it, consumer Pascal seems to throttle its frequency as temperatures reach and exceed ~82C. Each hit at 82C triggered a frequency fluctuation of ~30~70MHz, enough to create a marginal hit to frametimes. This only happened a few times through our first endurance test, but we've conducted more – this time with overclocks applied – to see if there's ever a point at which the throttling goes from “welcomed safety check” to something less desirable.

Turns out, the thermal throttling impacts our overclocks, and it's limited the potential of a GPU that's otherwise a strong overclocker. And so begins Part 1 of our DIY GTX 1080 build log – disassembly; we're taking apart the GTX 1080, tearing it down to the bones for a closer look inside.

The above video is the full disassembly of the GTX 1080, should you have to take yours apart. It's not an easy process, but we'll talk about some of it briefly in this article – check the video for the rest.

Part 2 will show the build-up of the Hybrid cooling solution, with part 3 showing our benchmarking results (the tests are underway as I write this).

Here's an excerpt from our review:

“The frequency is fairly stable here, but shows dips in frequency which grow in consistency as the test continues. Let's zoom in on that data; the scale is a little wide to properly see what's going on. Here's a blown-up version of those spikes, truncating the data from ~5500s to ~7500s:

“This dance occurs five times in a span of 42 minutes. To this end, the metric is important to measure, but can be ignored as an end user. You will not perceive these hits, and the frequency throttle is so minimal as to be imperceptible on framerate in the greater scheme of a 2-hour play session.”

Here's where the frequency recovers after temps drop to 81C/79C: 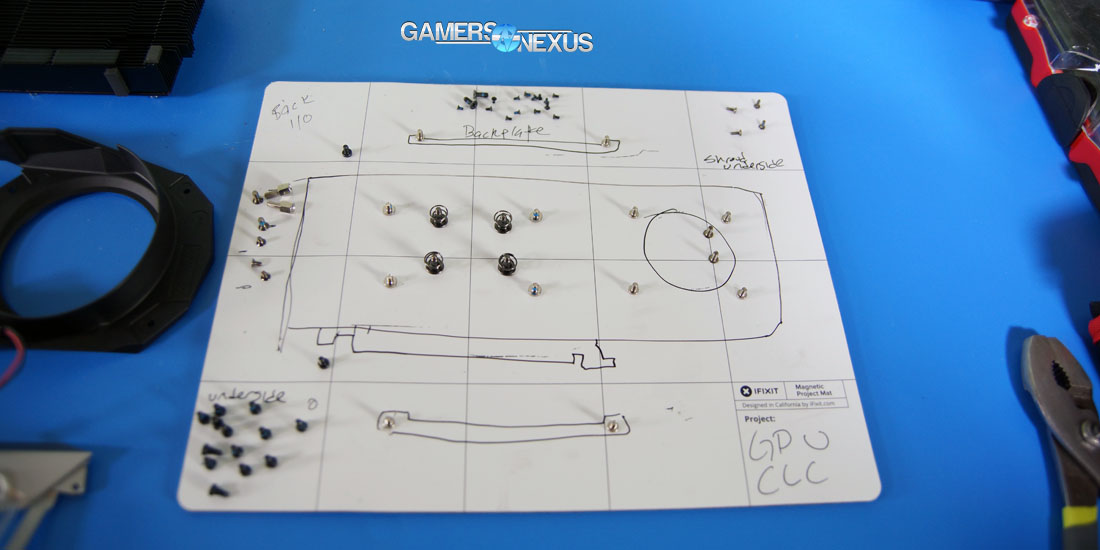 Taking apart the GTX 1080 isn't difficult, but it's easy to screw up – and we did (a few times, too). Some of the build is significantly different from the GTX 980 Ti, including the base plate mount points; the “tessellation” of the new card will prohibit installation of a 980 Ti Hybrid faceplate, and so we're going to run this with a bare, shop look to it. The pump will be exposed in our final build.

We set aside a magnetic project mat and drew the card on it, then placed screws where they belong as it was taken apart. This will help during reassembly and is something we strongly encourage for all DIY tear-downs.

We completely disassembled the card. There was nothing left but PCB & components after. Here is the list of screws that we removed (in order, to the best of memory – the video will show order perfectly): 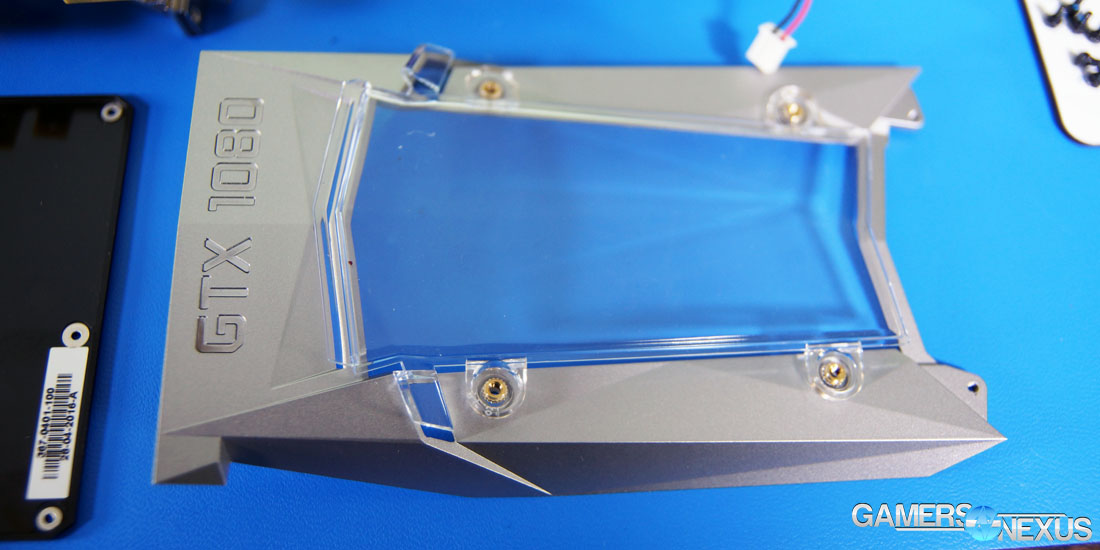 At this point, the faceplate and GPU shroud can be removed. The next part of the process is to remove these screws:

The face plate should decouple – it's just two halves socketed together – and the acrylic will fall out. Remove the shroud, then remove the heatsink (which is now loose).

This will expose the GPU surface. Clean thermal compound as desired or necessary. Next, to get the rest of the shroud off, we have to remove these screws:

And now we've exposed the back-side of the PCB, following removal of the backplate. This part is particularly annoying. Rather than use Phillips head screws, as is normally done, nVidia uses tiny hex-head screws into which the backplate secures. These screws cannot be used with a driver head as they are threaded (because those tiny backplate screws will thread into these). You must use a small hex driver to remove these, though pliers work in a pinch. We'd suggest not doing that, though. 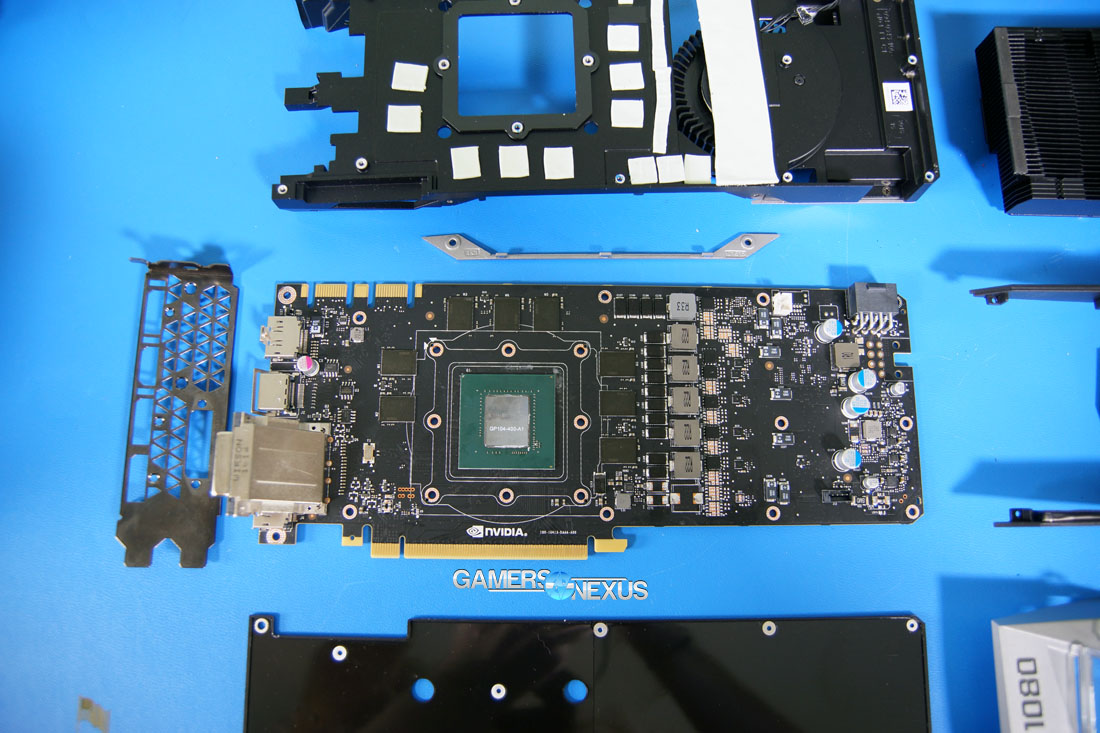 The embellishments lift up. They are not adhered to the surface like with previous reference card designs. The Founders Edition sockets them; lift up from the socket and remove. These are very easy to snap, as we discovered. They're not functionally important, thankfully.

The card can be pulled apart now. Take care of the thermal pads that line the base plate.

If you'd like to dismantle the right side of the heatsink, over near the fan, you can do that by flipping the base assembly over and removing an additional two screws. This will make it possible to mount a pump to the VRM blower fan.

Hopefully this helps someone out! We just finished building the GTX 1080 Hybrid up and have already begun testing. We should have part 2 of this content online later today.