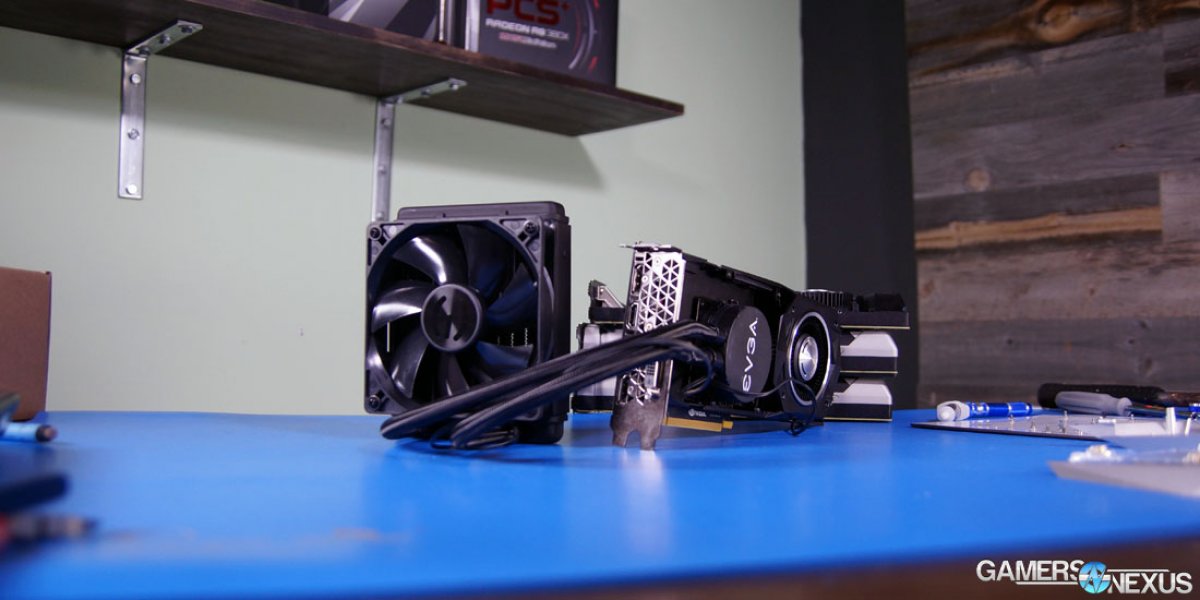 Had investigators walked into our Thermal-Lab-And-Video-Set Conglomerate, they'd have been greeted with a horror show worthy of a police report: Two video cards fully dissected – one methodically, the other brutally – with parts blazoned in escalating dismemberment across the anti-static mat.

Judging by some of the comments, you'd think we'd committed a crime by taking apart a new GTX 1080 – but that's the job. Frankly, it didn't really matter if the thing died in the process. We're here to make content and test products for points of failure and success, not to preserve them.

We learned a lot while performing this experiment. The card's not necessarily easy to disassemble, for starters, but it also feels limited in some ways. It's a reference card, so these limitations are somewhat expected and not unreasonable. GPU manufacturers don't normally invest high dollar in their PCBs – that's what the AIB partners are for, and there's got to be room in the market for them – and they also don't want to directly compete with their partners. Such is the weird nature of being, effectively, a supplier while still trying to sell your own product.

And so we don't begrudge nVidia for its Founders Edition card (though the name is still so bad that our most popular article this year simply explained what it means). It's the highest-performing single GPU we've ever tested, it overclocks acceptably out of the box (~1733MHz stock boost to ~2030MHz unmodified OC), and it cools about the same as nVidia's previous reference cards. The Founders Edition card is clearly highly performant on the whole.

But, just like with the reference cards, we wouldn't recommend buying one. It's always made more sense to buy AIB partner cards. They're normally pre-overclocked – and that's major, since the majority of users will never OC their own cards – and they're outfitted with vastly superior coolers, sometimes even with better VRMs and more power-ready board designs.

The card is limited in three ways, one resolvable with a sacrifice.

Thermals are the first limitation, as we showed in our Part 3 – Performance Results article and video. The overclocked clock-rate throttles down once the card hits 82C – normal for these modern video cards – and begins rattling back-and-forth under thermal load. The range of fluctuation isn't large and has not yet exceed 100MHz, but the general instability impacts gameplay fiercely in some tests. This can be partially resolved by ramping the VRM blower fan up to 100% speed, as the auto fan results bounce between 27% and 55% to create nearly equally annoying pitch fluctuations. The 100% speed, though, measures at just under 60dB. That's loud enough to be heard through headphones, and isn't really acceptable for home use.

Throwing liquid onto the card fixed it pretty instantly, as we could keep a ~27% VRM blower fan speed and just run the liquid pump, the two jointly equating just over 40dB. That's a significant noise improvement.

But we were limited again, and this is the newer information that we didn't already post: Looking into the card's performance further, it seems that the next limitation is in its voltage levels. We've struggled to exceed ~1061mV, having hit ~1080mV just once and for a few seconds, and that's preventing further increases to clock-rate that could be stable when under liquid. This is the most immediate stopper to a high OC. Physical power mods might be able to bypass some of this (tricking the resistor, for instance), but an unlocked VBIOS would be better. The inherent risk with unlocked VBIOS is that the GPU may not survive whatever voltage the user throws at it, but that's the trade-off.

If the voltage limitation can be bypassed, the next would be power – an extra power connector will help with that, and that's something the AIB partners often explore.

If you're into more serious overclocking, it's clear that the aftermarket cards will be superior. Then again, that's really not uncommon. Reference cards have never been able to push overclocks as high as aftermarket. Even without the overclocks, AIB partner cards should almost certainly cool better (though blower fans have specific use cases which are beneficial, AIB blower models should run cheaper with a plastic cooler), will run lower RPMs and noise levels, and may even be cheaper. We're hoping that the semi-reference AIB partner cards – that is, a reference PCB and power setup, but with a better cooler – will fall around $650. MSRP floor is $600, though it may be a little while for devices to hit that price.

This concludes the series... for now. We have more ideas to potentially explore post-Computex.