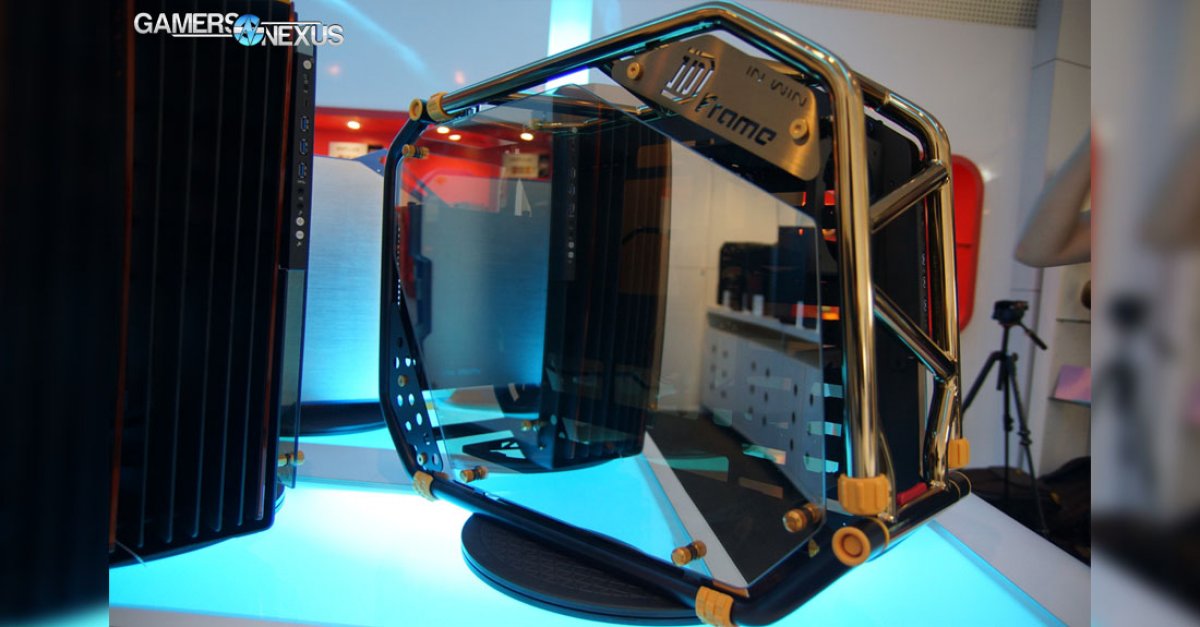 The video above shows everything in action. In-Win has hundreds of employees at these locations, making for a high-paced and efficient production cycle. The factory will house In-Win's case modding competition on May 27, to feature critically acclaimed modders Bob Stewart & Rod Rosenberg, Ron Lee Christianson, Lee Harrington, and more. 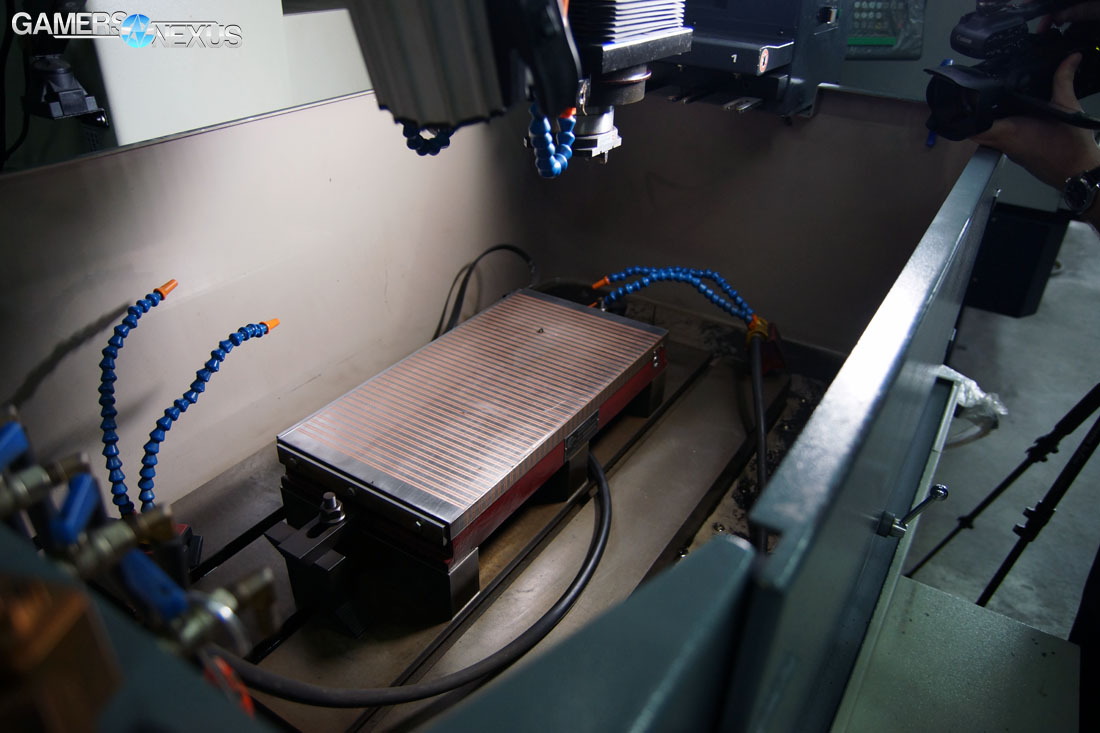 (Above: An Automated CNC Machine)

One of the largest, open-floor rooms was lined with manual and automated CNC machines and industrial-sized sanders. The CNC machines can accept coordinate input from software to etch-out PC component tools – power buttons, small case parts, fitments, switches – and work on materials as hard as copper. Manual machines are, as the name might suggest, manned by an operator responsible for physically moving the milling bit about the edges and surface of a material. This material is grinded down into the shape of the tool it will ultimately create. 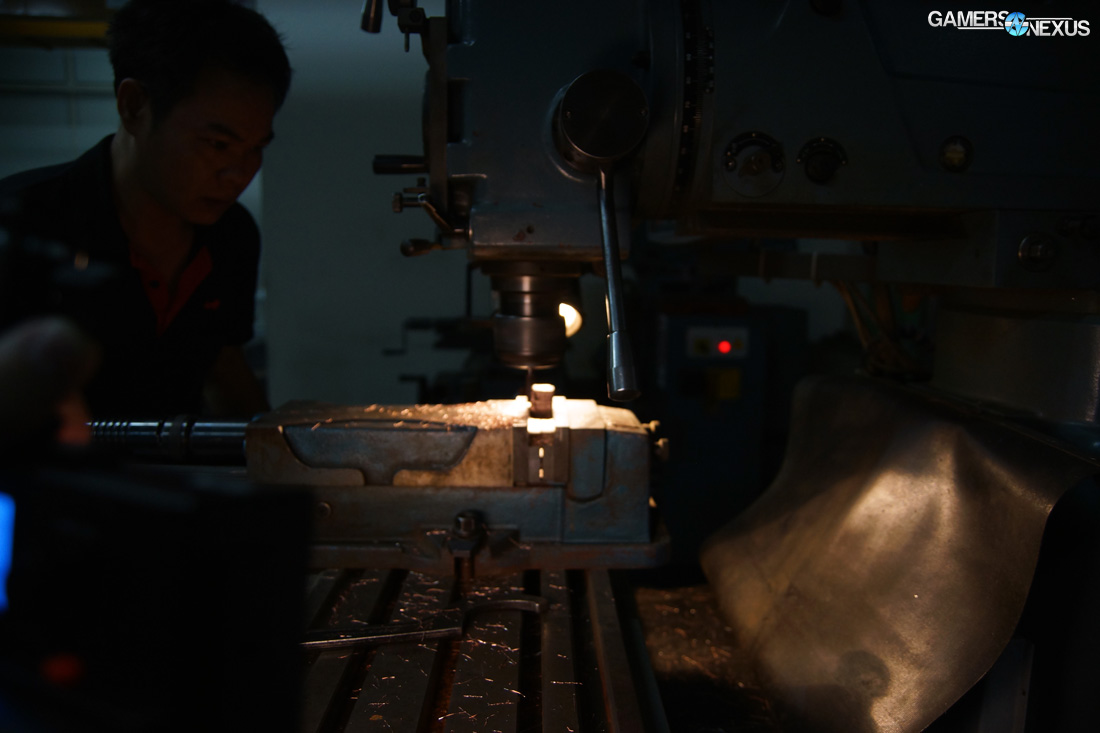 (Above: A manual CNC machine and its operator)

We previously spoke about what a “tool” is with George Makris of Corsair, but the short of it is that they're the expensive molds and guides used to manufacture hundreds (or thousands, or tens of thousands) of case components. The tool is later placed into other machines, like injection molders, to provide the shape governing the component being made. 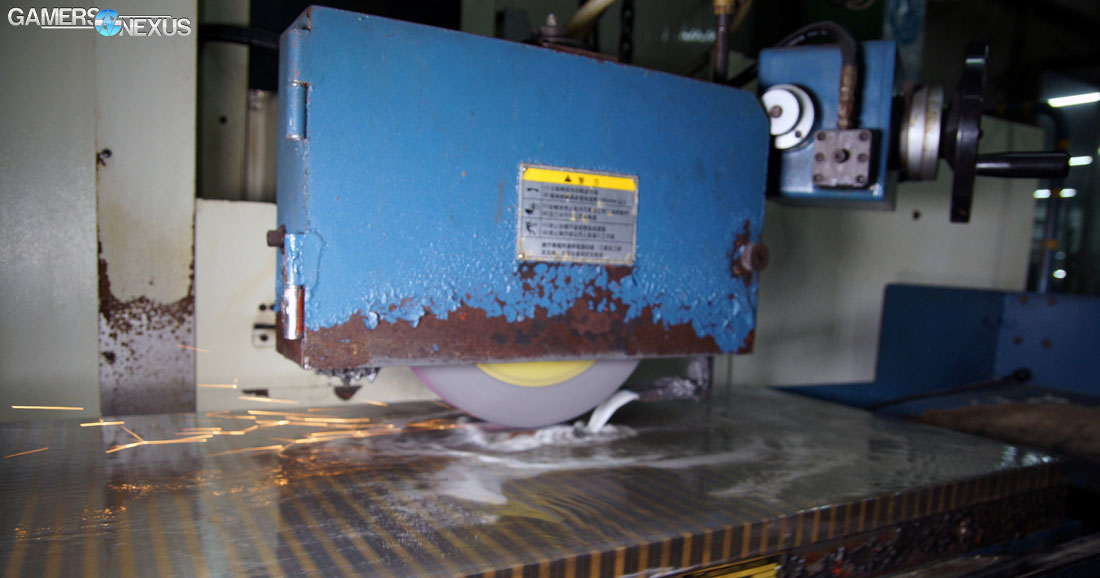 (Above: A semi-automated sanding machine, spraying water to cool-down the tool)

Industrial sanders aren't quite as exciting as some of the other machines here, as they're fairly prevalent in all aspects of industry. Still, it's cool to watch them in action – as shown in the above video, water flowing over the copper – just because of how ruthlessly efficient they are. In-Win's sander uses a magnetic plate to cling to the tool or mock-up being engineered, ensuring no movement, and then violently whips the table bearing the material back-and-forth. That process is countered by a whirling grindstone, moving vertically to sand the surface smooth. Water is sprayed at the material to keep it cool and prevent warping or inefficiency during the sanding process. 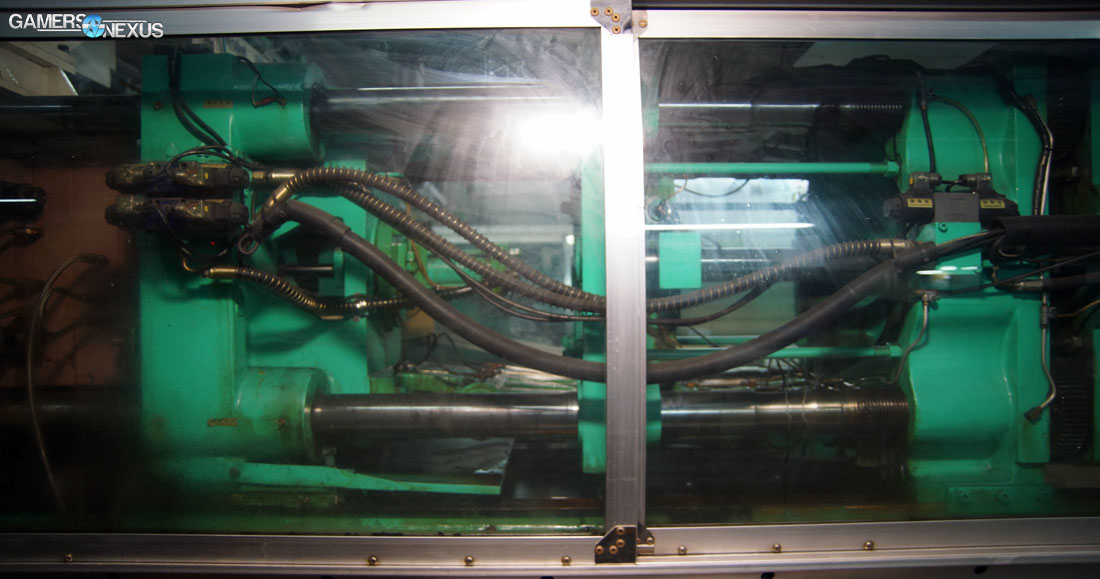 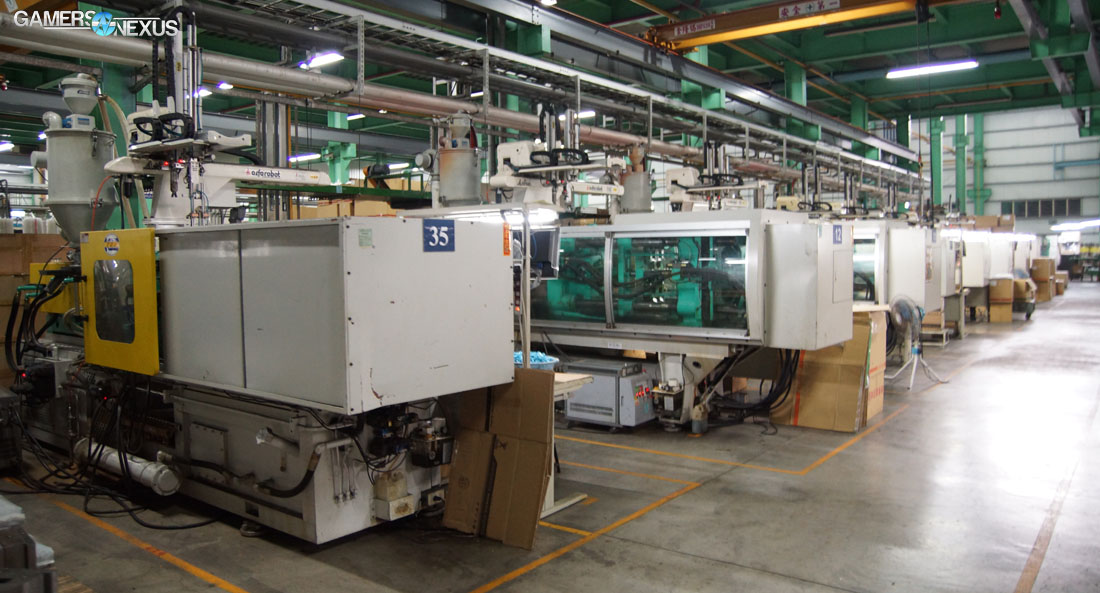 This part's pretty cool. These machines are used to literally inject plastic into a tool (or mold) created earlier in the factory. The plastic is stored in a large vat, dropped into an electric heater, warmed to a point of malleability, and then pressed into a mold. This shapes the plastic case panels that you'll find on most PC cases – small stylization elements near front I/O, front panels, so forth – and then delivers the pieces to a conveyor belt for further work.

A robotic arm swoops down and grabs the plastic part, drops it onto the belt, and the belt moves the part toward a factory technician. The technician then inspects, cleans, and packs the component for delivery intra-factory – e.g. for assembly in the assembly line.

These three tools are used for working with sheet metal. Most PC cases have some form of embellishment on the side panels, which are often made of steel. A prime example would be In-Win's budget-friendly 303 case, which has a honeycomb hex pattern on its PSU shroud. The honeycombs in this example are stamped out of a piece of steel, using a guide on the machine, and the material is later bent into its L-shape that covers the PSU. 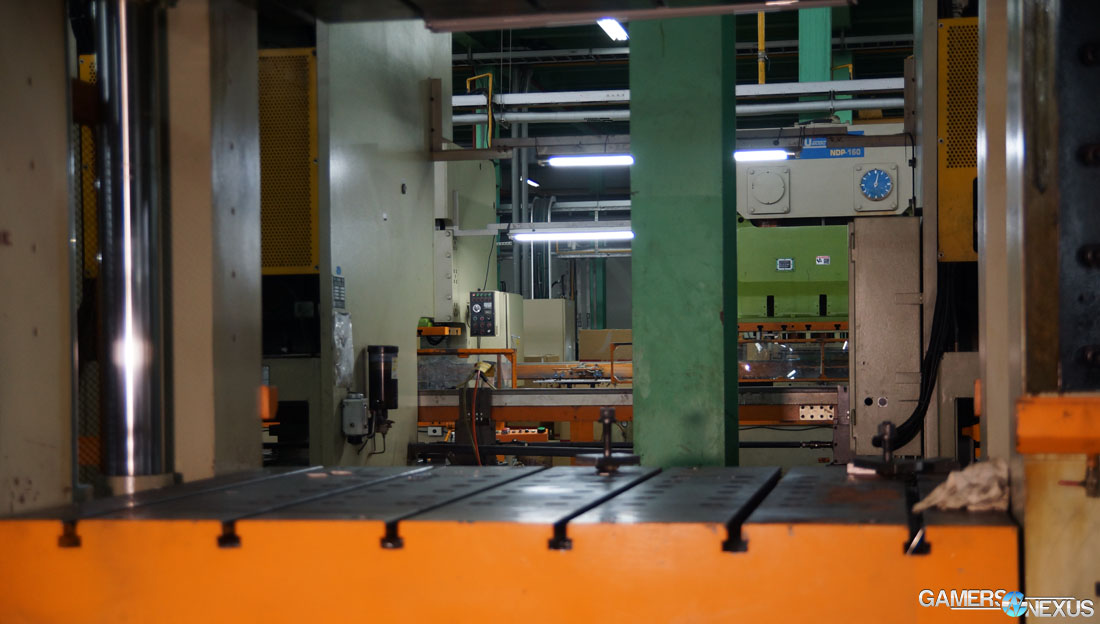 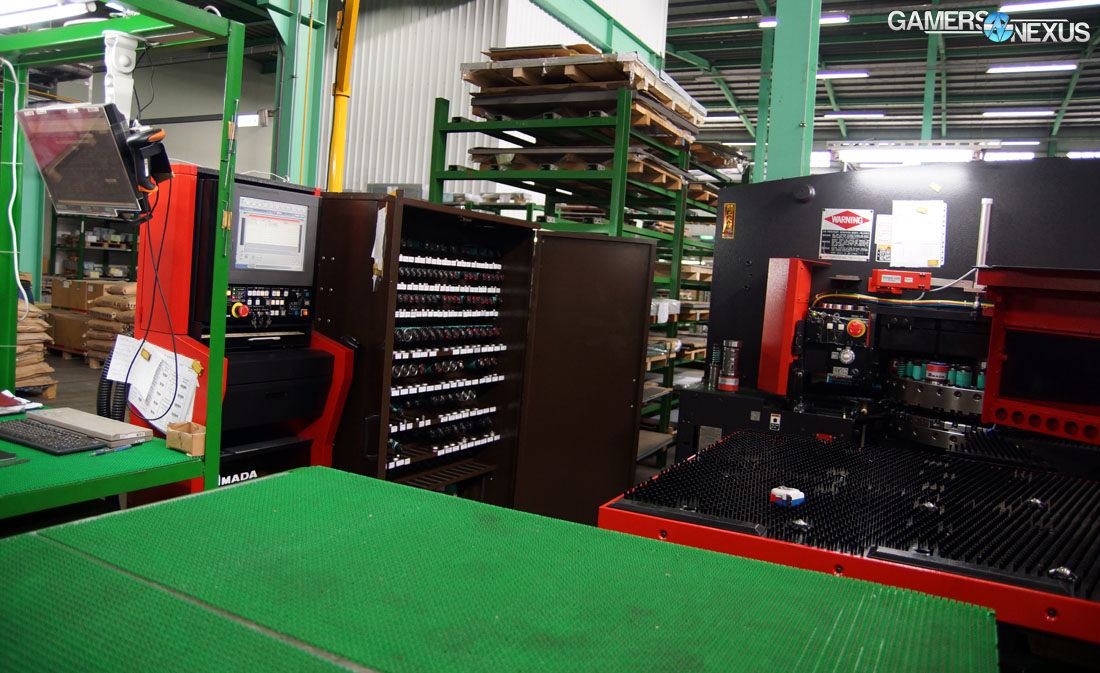 In-Win's brand new factory – they've got a few buildings – has just been built-up for powder coating. This process is significantly more eco-friendly, we're told, and allows for automation of the painting process. The video of this particular section is well worth a watch, if you haven't yet clicked the above YouTube player. It's early in this factory, and the full team hasn't ramped-up just yet. Still, we were given a press demo of how things will work when in action. 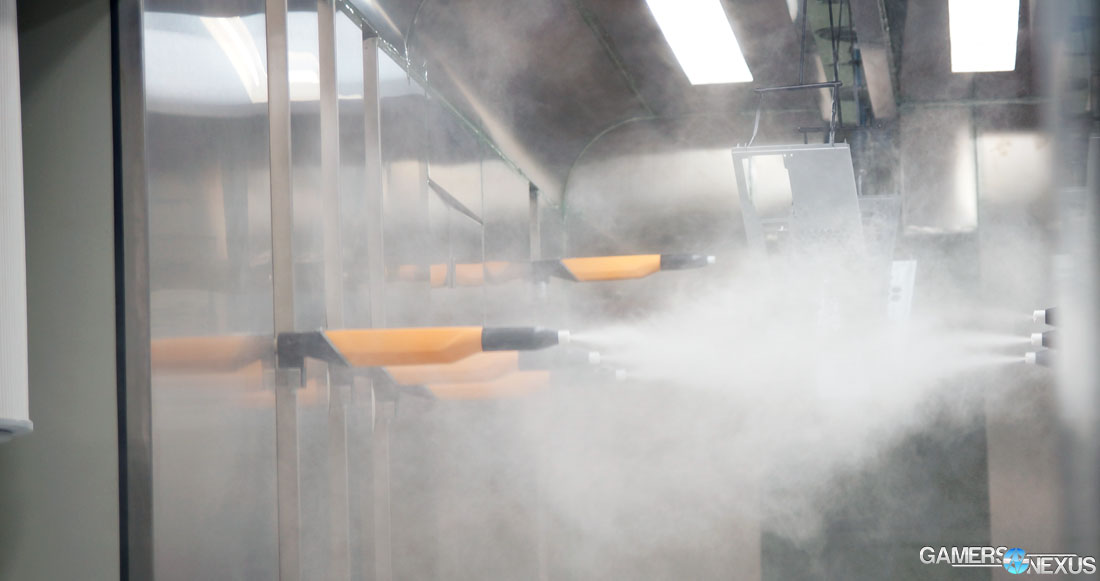 Case paneling is hung from a ceiling-mounted conveyor belt, which hangs-down plates for carriage. The panels are ever-so-slowly rotated through the giant factory, which takes hundreds of components at a time, and eventually reach the paint room. Just prior to painting, a technician deploys a large air compressor gun to blast any dust particles off the panel (which might interfere with painting), then clears the panel to progress down the line. That panel moves through corridors seemingly inspired by Mirror's Edge, then lands in the immaculate painting room – shoe covers required.

Inside the powder coat chamber, a set of paint-spraying guns shift up-and-down the walls, spraying the powdered paint evenly along the panel. The panel never stops moving in this process, and eventually exits the chamber, drying as it moves along the belt. Toward the end of this process, the panel is removed and packed for the assembly line.

Watching the powder coat chamber suck tons of dust into filters had us curious just how often the factory had to change those filters out – they stopped any paint from exiting the chamber, protecting operators (and camera equipment). We were told that the filters never have to be changed, and that they instead empty every ~35 seconds. When emptied, the filters drop dust into a pan below, which later gets cleaned out. 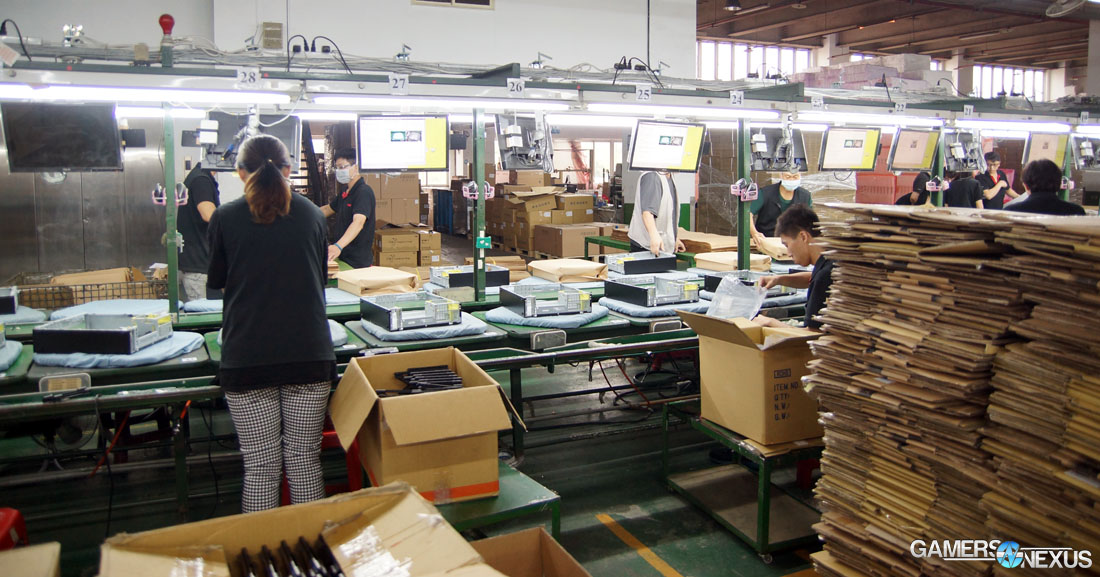 The assembly line is where all the components are screwed, riveted, and bolted together by technicians. These lines are manned by dozens of factory workers, each using a digital screen with assembly guidelines and electric tools (drivers, mostly). Different pieces of the cases are screwed together, the case is rotated for the next technician, and then the folks at the terminating end of the line are responsible for packing the case for shipping.

This was just part of our tour – see the above video for more information on In-Win's factory. We'll be flying to Shenzhen, China today to visit some other teams (and hopefully the electronics market). Next week is Computex “proper,” but we'll continue our factory and HQ tours during that time.