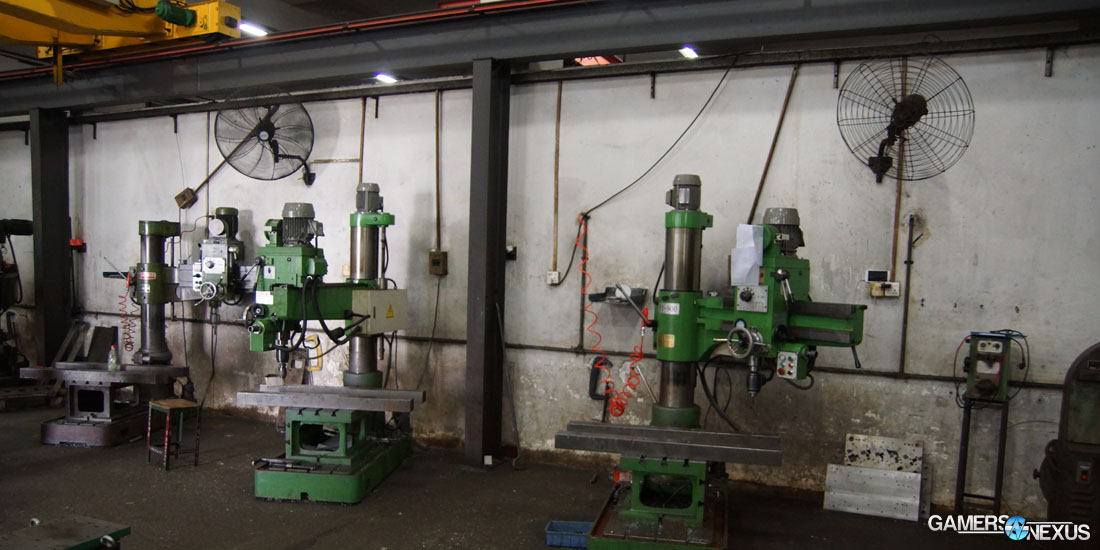 As discussed with Corsair at CES 2016, PC case tooling is the most prohibitively expensive aspect of case manufacturing. The process can cost upwards of $100,000 for a single case, in extreme instances, and the tools made must be ready to endure a lifetime of abusive forces. Manufacturing is not gentle on equipment – the result of slamming giant metal tools into thin metal sheets, atop giant metal tables – and wears-down tooling over time, eventually leading to the EOL for the particular product. To make the cases, first the tools for those cases must be made – it's not as quick as dropping an AutoCAD file into a machine and beginning mass production. 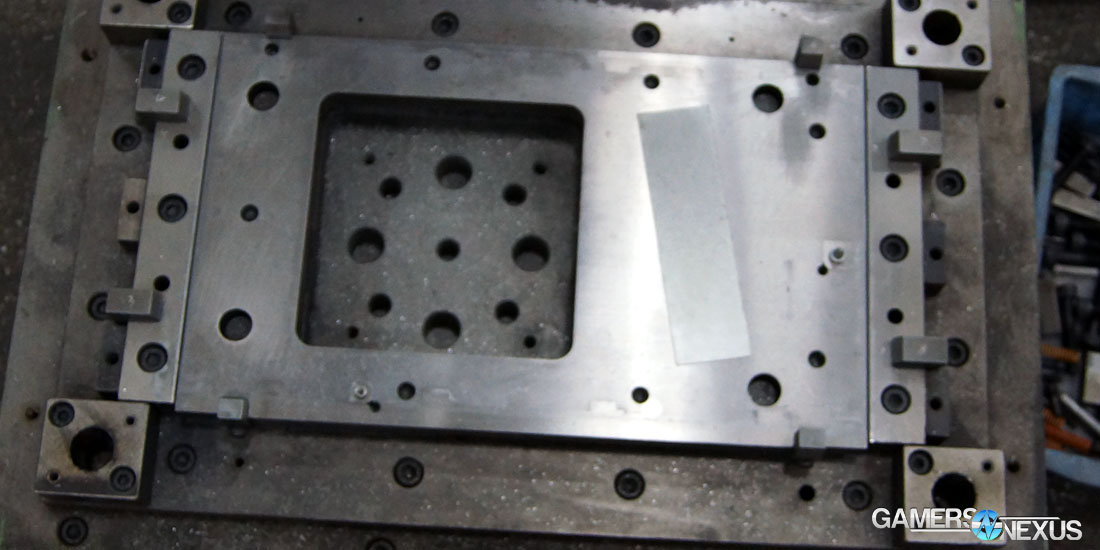 Each case can individually consist of 60-70 tools, with some more complex cases requiring 100+ tools for manufacturing. That's tens of (metric) tons of tools per case, all of which are used to mass produce the specific shapes required for the case chassis and paneling. For perspective, something like the S340 would require in the 60-70 tool range, whereas the NZXT Manta demands closer to the 100+ range. 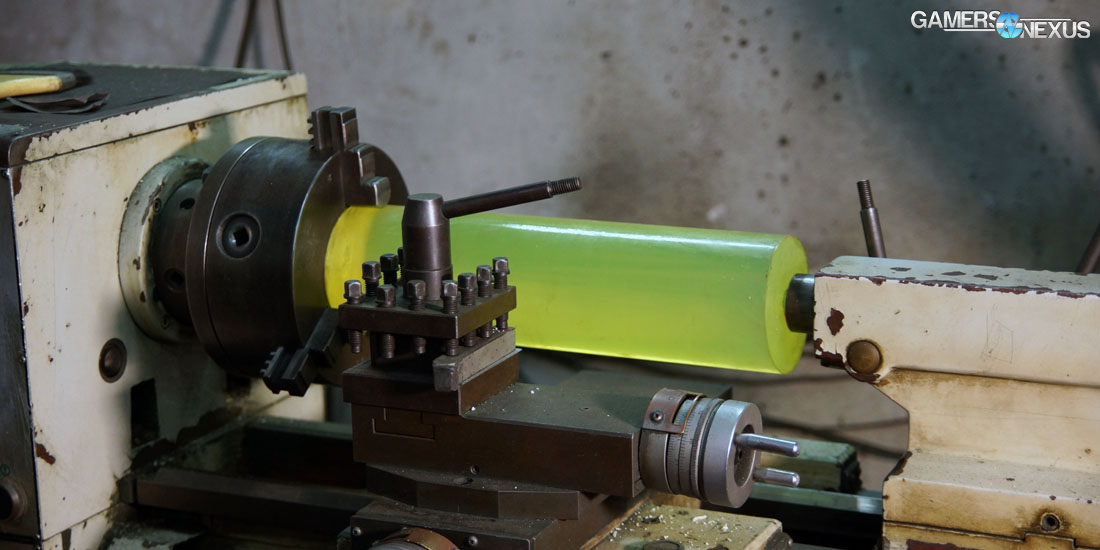 (Above: Making the plastic supports for the case tools.) 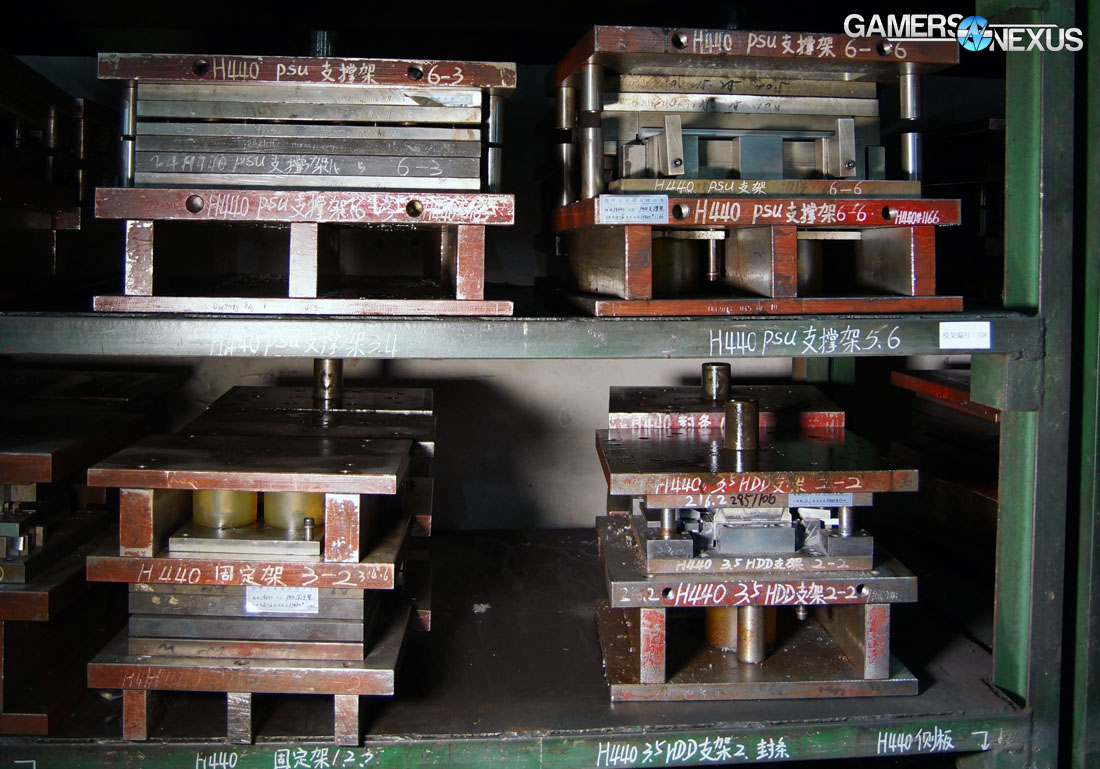 Tools are made in the steel factory, during early machining processes. Automated CNC machines use coordinate input from CAD software (effectively engineering files) to begin shaping the large chunks of metal into something vaguely resembling a case component. To really dial-in the tools to a high level of precision, NZXT uses electrical discharge machines that are capable of narrowing-down edges to within a 0.005mm variance with tight tolerances. These machines operate by electrically heating a metal tip, then repeatedly slamming it against the surface of the tool to release “instant heat” that finely tunes the surface.

Tools weight upwards of 1000kg each, making storage a unique challenge. NZXT's factory cuts its own storage medium – basically large orbs of green plastic – that sit between the tools to provide spacing without damage.

Leaving the tooling room and venturing into the main part of NZXT's first factory building, we were met with dozens of stamping machines that process metal into components. This metal is rarely provided in sheet form these days, and instead is cut from large reels – spools, basically – that unfurl into a stamping machine.

The stamping machines are outfitted with tools, created in the previously described process, and spit-out side panels or other paneling and steel material components. Next, an arm equipped with suction cups automatically grabs the sheet and moves it down the line, where technicians begin inspecting for quality. Another machine on the stamping line, toward the end, punches the screw holes and prepares the panel for riveting or other mounting hardware. 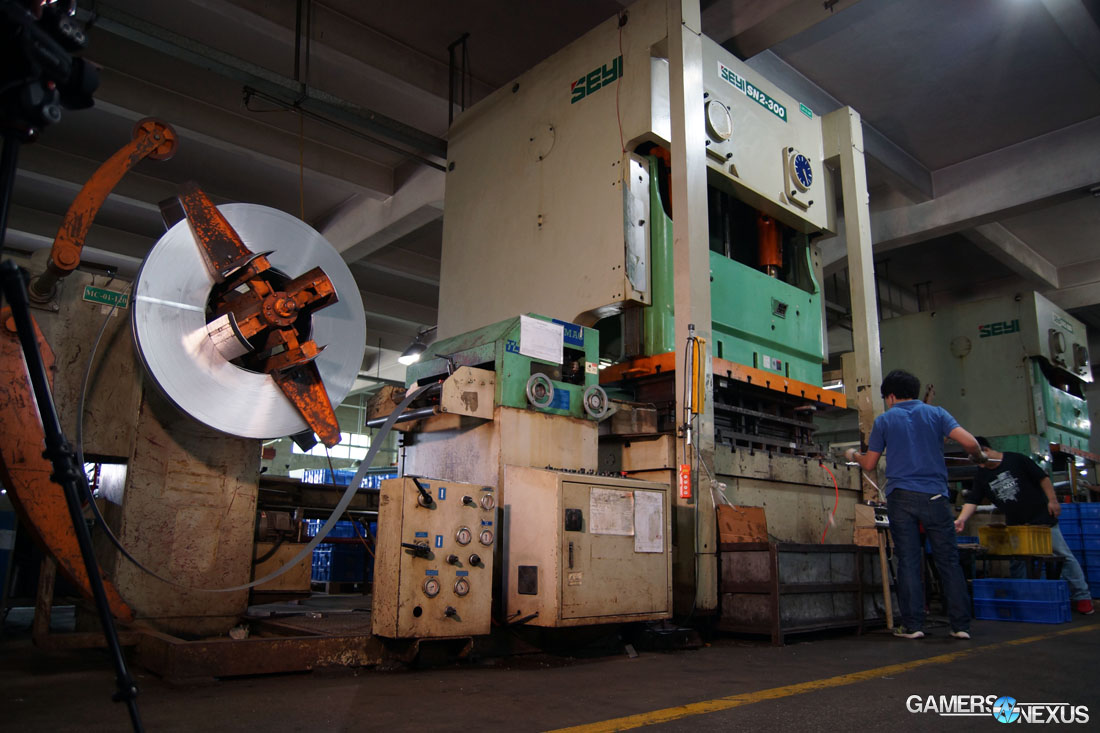 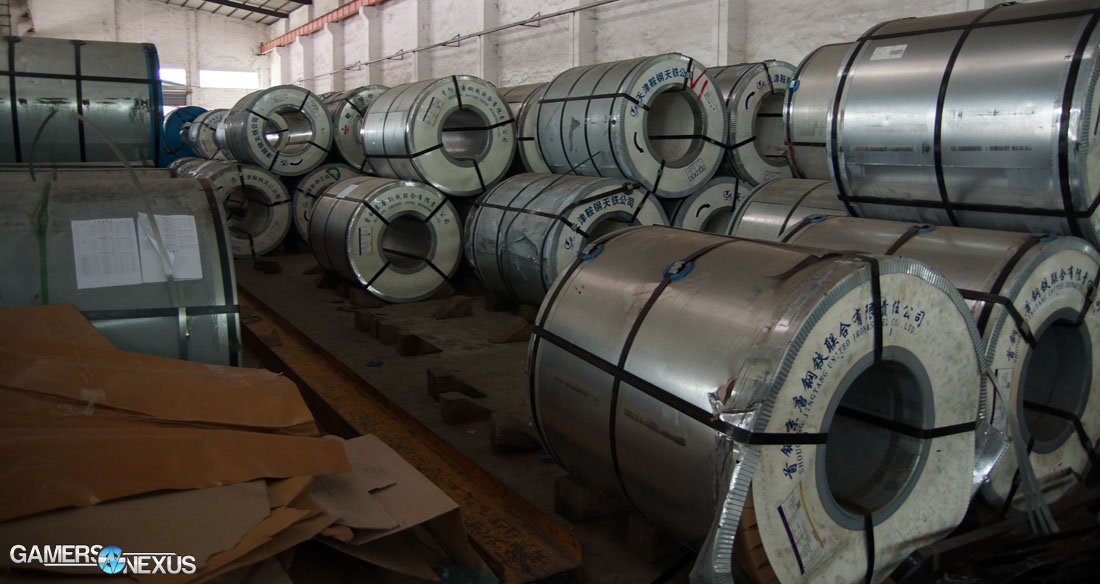 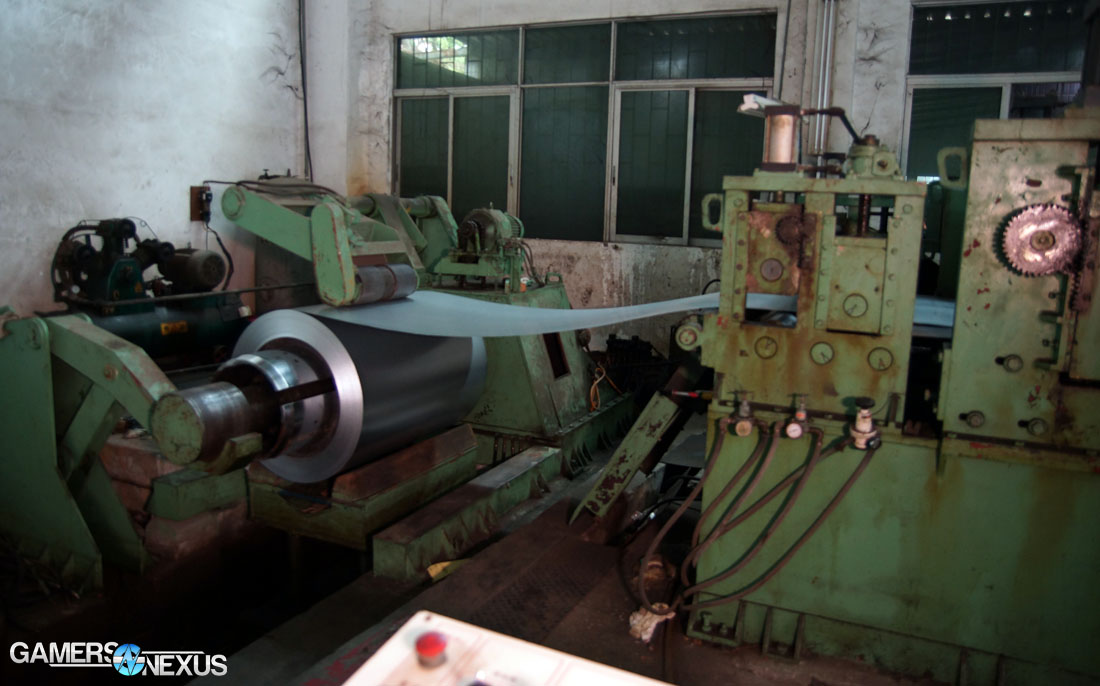 (Above: Metal is fed into the giant stamping machine.)

Once the quick quality checks are complete and the panel's measurements are checked (thickness, mostly), the panel (or other component) is marked complete and ready to move to its next phase.

The stamping phase mostly uses smaller machines that work in a long line, but will sometimes defer to massive, 6-tonne “SAG-600” units (or 4-tonne SAG-400 units). These are easily 20 feet tall; one pull of the lever applies 6000 (or 4000) metric tonnes of downward force to the steel, thus creating the panel that's found on your case. NZXT previously used these machines to make Source series paneling. Borrowing a quip from PC Gamer editor Wesley Fenlon, who accompanied us on the tour, these machines are what you'd call “Terminator Killers.”

NZXT and In-Win use similar processes for injection molding – somewhat standardized in the industry – and work with one of these machines:

To add some detail to what we learned during our previous case manufacturing tour, plastic injection molding is the process by which plastic case components are molded into their final shape. Plastic injection molding works primarily by filling a 'hopper' with thousands of plastic pellets (small spheres the color of the plastic), then dropping those into a chamber to be electrically heated. The heated pellets are then injected into the mold, thus creating the shape required for the case. “Sprew,” as it's called in Warhammer, is leftover and removed, then recycled by the factory. All of NZXT's visible case components are made with new plastic, reducing risk of imperfections in the surface and improving overall product quality; recycled plastic (using the leftovers from this process) is used for unseen components – the inside-of-case USB shroud, for instance.

During the injection molding process, the plastic is heated to approximately 280C, with the tool reaching 100C. This is sufficient to form the plastic shape and fit the mold. 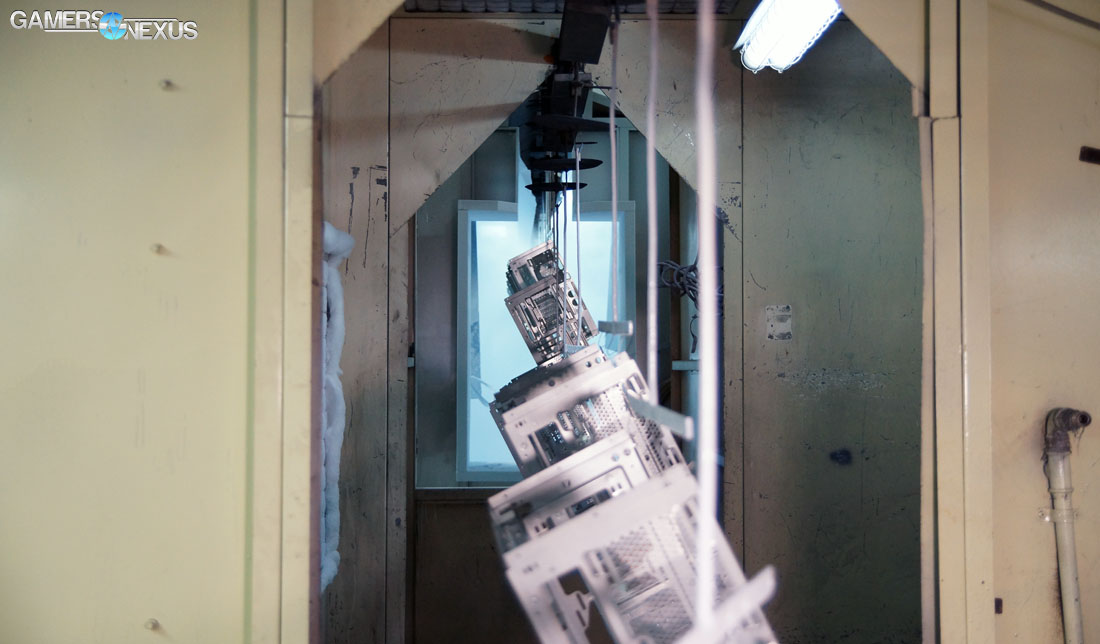 Eventually, the cases reach the riveting line. The Phantom 820 is still being manufactured and was the active build when we visited the riveting line. The 820 can utilize up to 56 operators at any given time, with the line producing 50-60 Phantom 820 cases per hour. To put this into perspective, the H440 is produced at a volume of about 150 per hour, and the S210 at 200 per hour.

If nothing else, the output volume gives perspective on case cost: Lower volume output means that the line could be used for something more quickly assembled, so that slower build must be cost-adjusted. Makes sense. Of course, there's more to it than that – tooling cost, add-on costs of HUE and other lighting kits, and so forth – but that's a start.

Painting is one of the final processes, just before shipping. NZXT can hang 300 cases on one paint line, 500 on another – they're hooked to a ceiling-mounted conveyor belt, as with In-Win's cases, and rotated through the building. The cases first dip into chemicals to remove any debris and dust, then move down toward compressed air blowers and blow torch-wielding technicians. These operators blast the cases, ensuring they are dry and free from dust (which is wicked off, blown away, or incinerated), and are the gatekeepers to the paint booth.

Once in the booth, automated powder coat 'cannons' move up-and-down the chamber to shower the cases with paint. These then proceed into a final inspection room, where powder coating specialists manually hit the buried-away crannies.

There's a batch quality control check, then the final packing/assembly and shipping process.