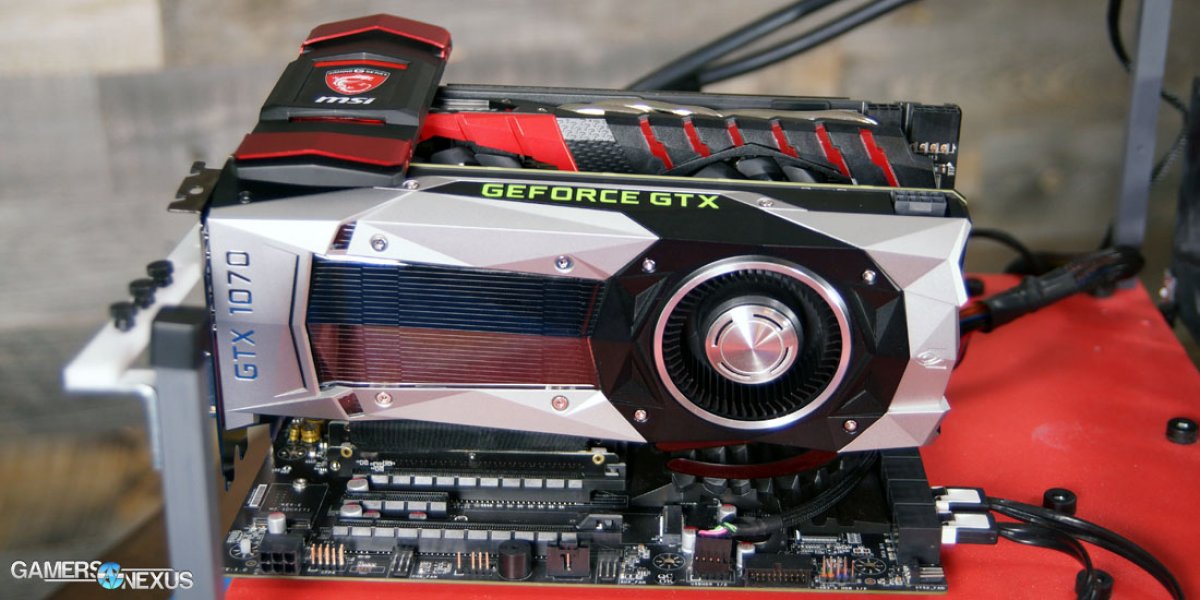 The Division is intensive. We use its built-in benchmarking suite for analysis, but there are a few critical points to be aware of: As a game, The Division has pretty heavily varied FPS depending on effects in the environment. Walking through the smoldering ash clouds of an explosive will tank FPS hard for that brief instant in the cloud, but isn't representative of greater gameplay (and is only an issue with some settings enabled). The Division is also an MMO, which isn't something we can really test given the latency of the servers and the variability of players on FPS – we need a reproducible scenario.

And so we run the benchmark, but point-out these challenges. The benchmark tends to be representative of real-world, in-game performance (even with other players) as it is exceptionally heavy on the GPU despite a lack of other players. 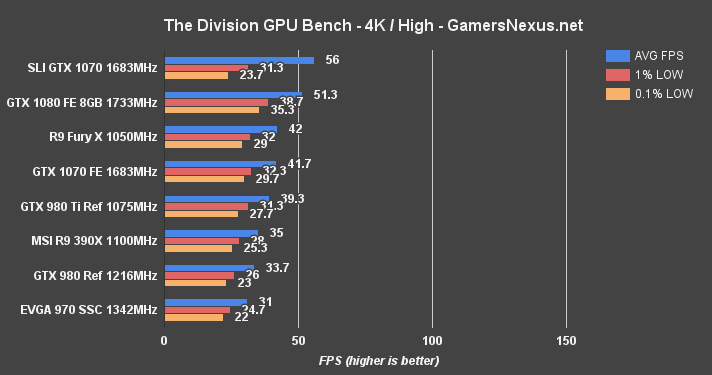 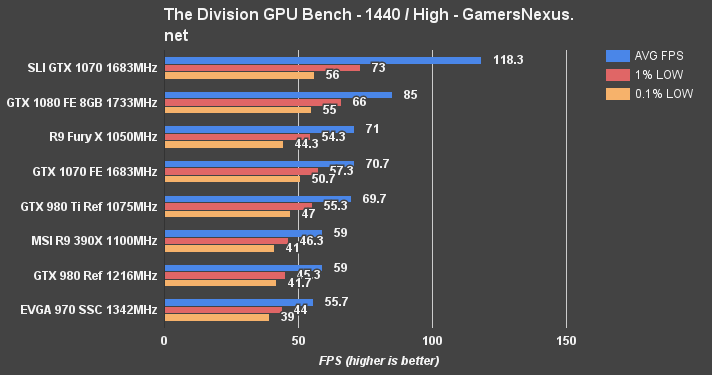 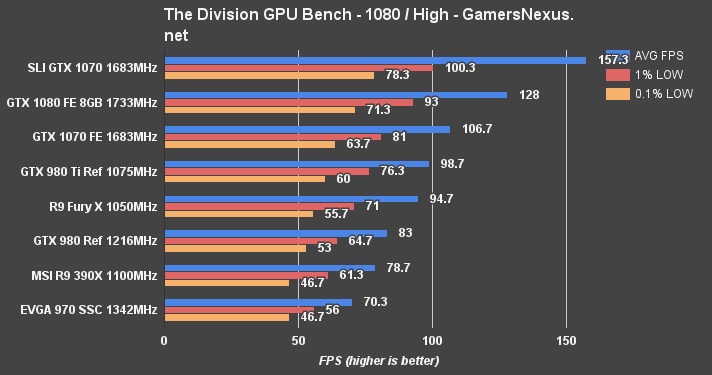 Mirror's Edge Catalyst came out this week. We ran benchmarks on day-one, our tests finding some odd behavior with low frametimes on AMD devices (as of 16.6.1 hotfix) and VRAM-abusive behavior by the Hyper settings.

ME Catalyst is one of the most GPU-intensive games we've tested in recent years, remaining true to its heritage, and even pushes the GTX 1080 into a struggle at 4K/High. When the game's fluid, it's beautiful – but the high-paced movement does make a higher framerate desirable for best gameplay (we found 50-60+ FPS to be the preferred window).

NOTE: Mirror's Edge is the one game where we ran an MSI GTX 1070 Gaming X as the single GTX 1070, rather than the Founders Edition. This is a change we will be making as we roll into the AIB partner cards, and ME Catalyst happened to be the game to initiate that transition. We try to move to AIB partner cards for AMD and nVidia once they ship, since we don't currently recommend the reference devices and because they're presently over-priced versus vendor pre-OC versions. 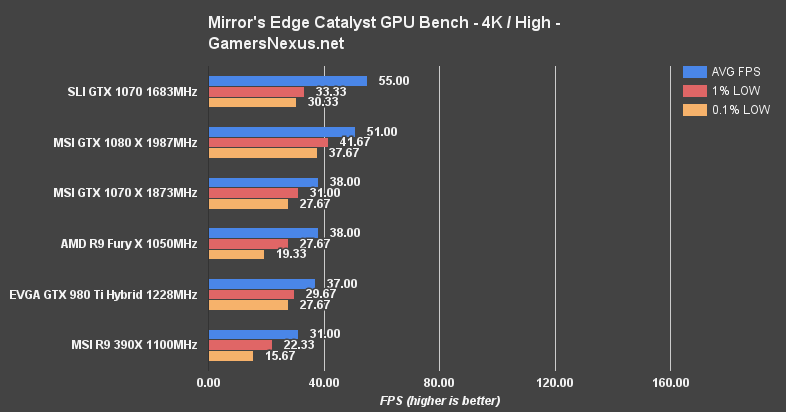 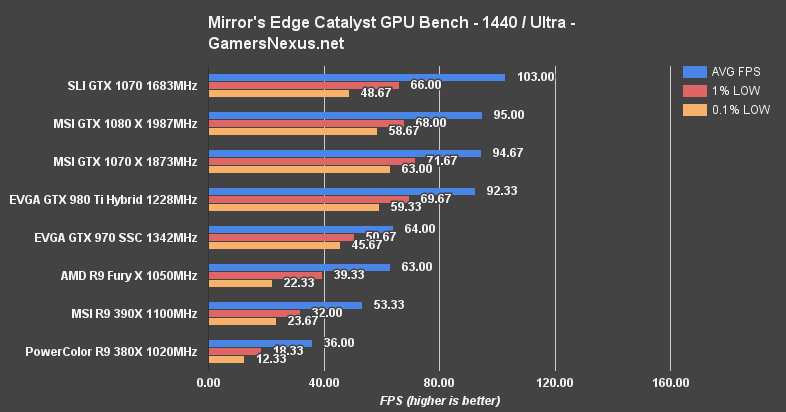 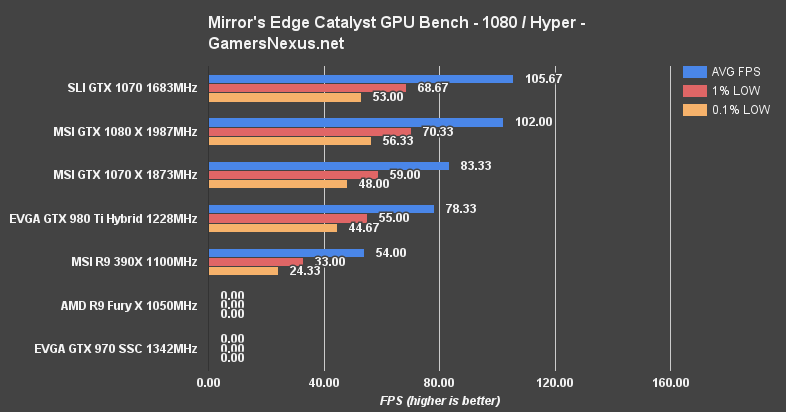 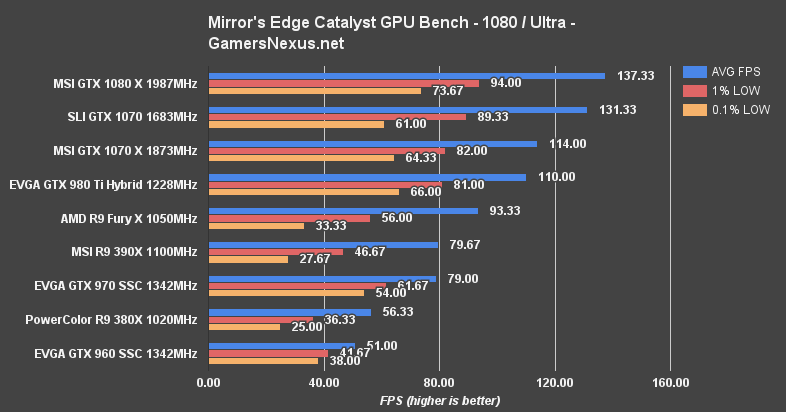 Black Ops 3 remains one of the best-optimized games we've worked with – perhaps a testament to Activision's experience in the space. The game has regularly posted strong performance for AMD devices as well, though the Fury X does still suffer at 4K. 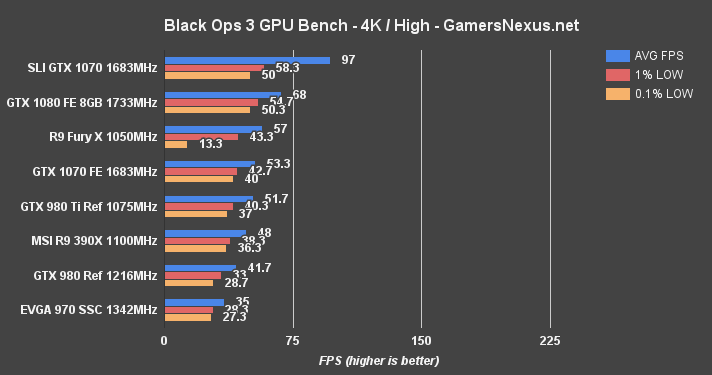 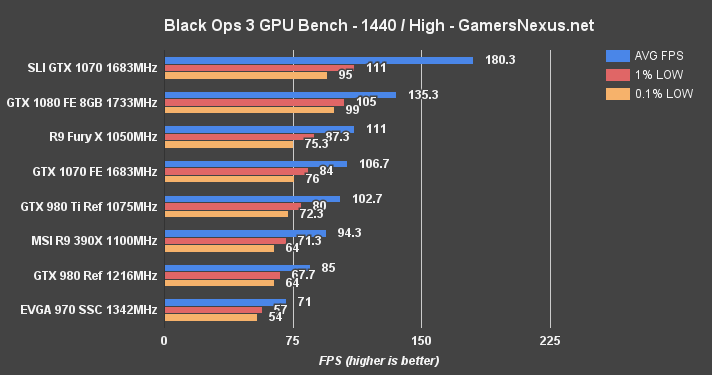 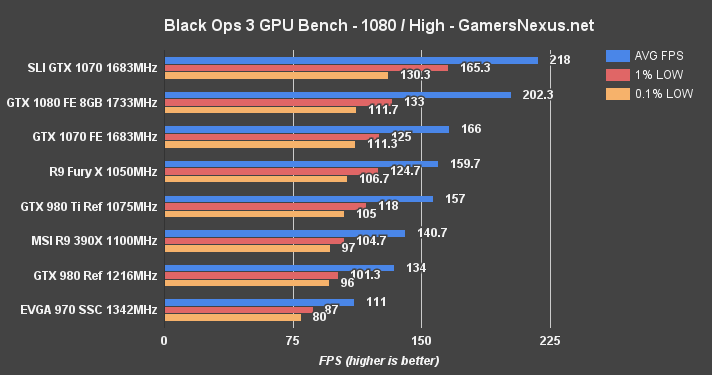 GTA V is becoming one of the longer-standing titles on our bench. It's been intensive, but reasonably well-optimized. We understand the graphics settings exceptionally well as a result of our graphics optimization guide, something which fuels our methodology. 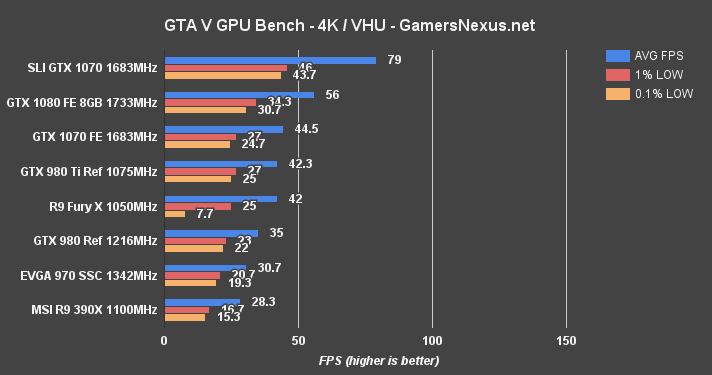 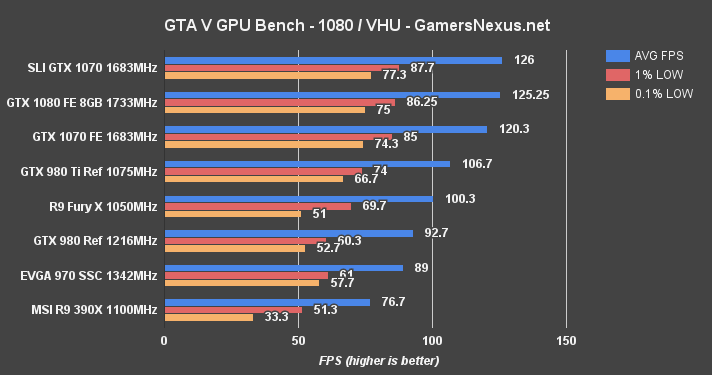 Metro: Last Light will eventually be phased-out of our bench, but its reliability keeps it on for now. 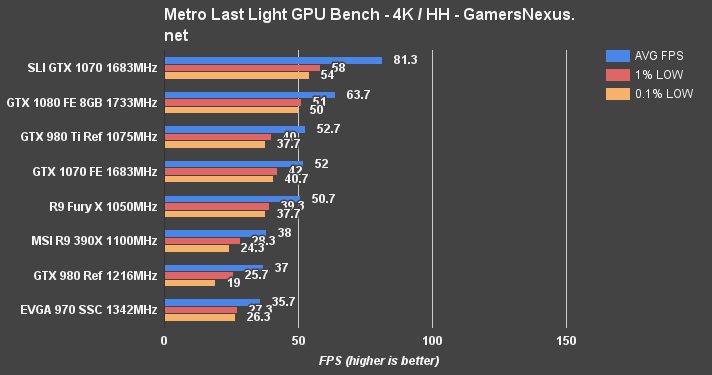 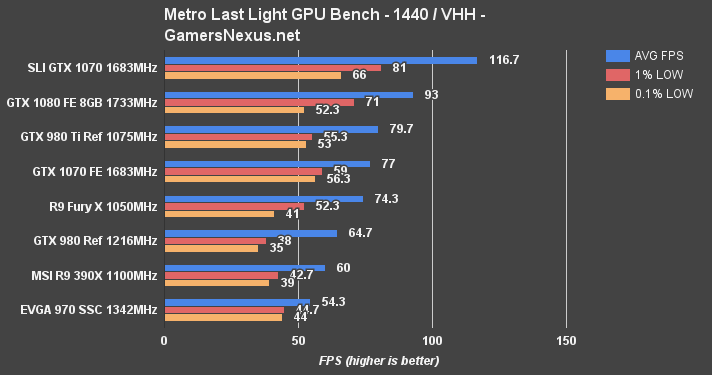 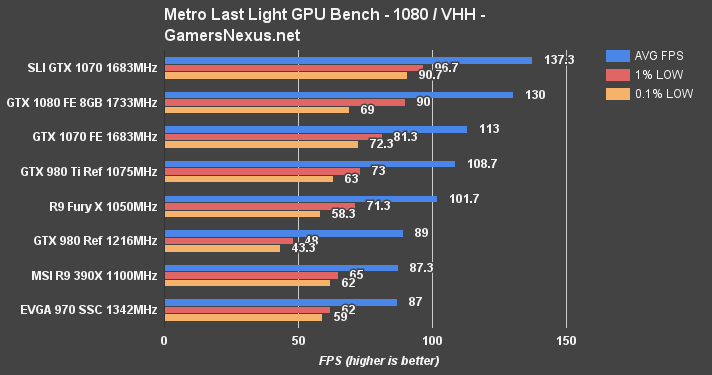 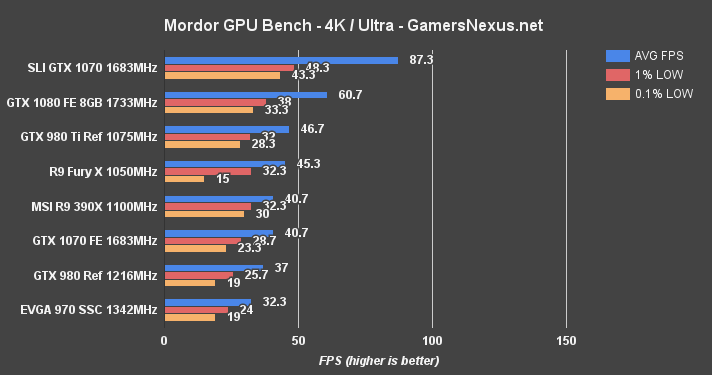 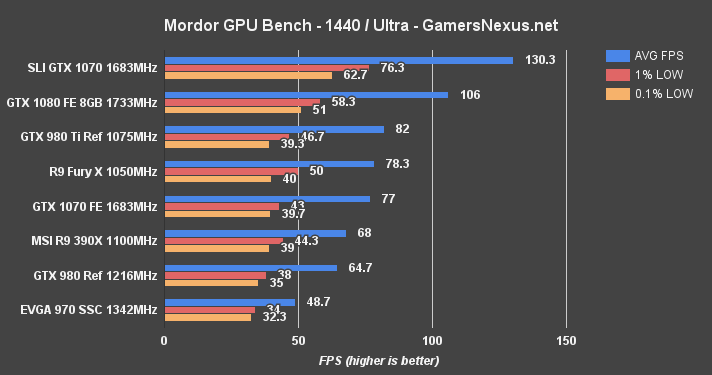 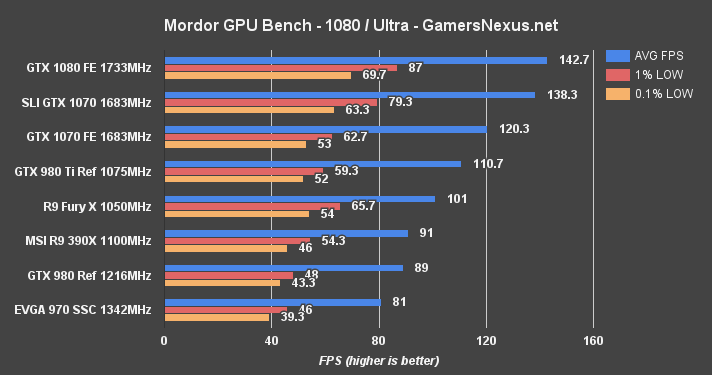 The last chart for this FPS bench, we see Shadow of Mordor operating at 87.3FPS on the SLI setup, a good ~27FPS lead (at 4K) over the 1080, or 35.95%, and ~40FPS lead over a single 1070, or 72.8% scaling. That makes Shadow of Mordor one of the most aggressively scaled games, producing real, measurable, and tangible gains otherwise unachievable on other devices.