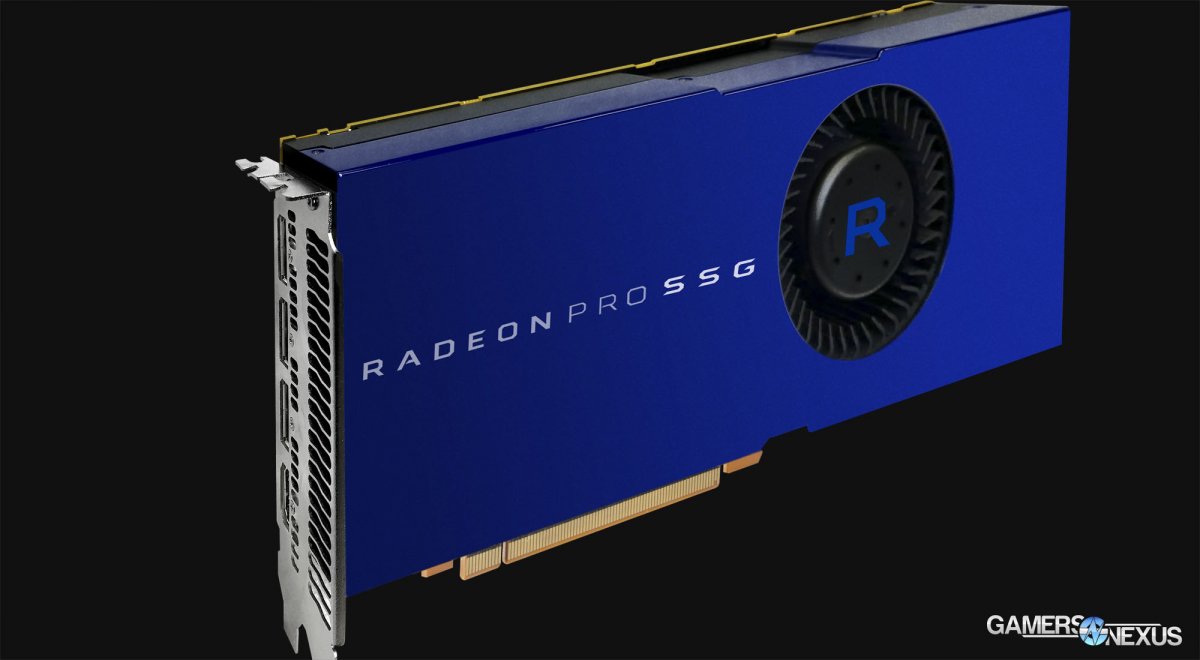 The Radeon Pro SSG runs a last-generation GPU, so it's actually not on Polaris – only the new WX 7100, 5100, and 4100 are on Polaris – and hosts its solid-state storage on the card. The SSG is a PCI-e video card of the usual design: There's a GPU, on-card memory, and a cooler. Also included on the card is a 1TB extended framebuffer, created out of solid-state storage. The SSD, or what AMD is calling Solid-State Graphics, has 8x PCI-e lanes allocated to it of the 16 total available to the card, with the remaining 8 going to the normal GPU functions.

The extended framebuffer uses NAND Flash (we explain this here) storage. It's effectively an SSD bolted onto a GPU, and allows production users to locally store large files that are being actively crunched by the GPU. Whenever the GPU needs a large texture, big data, or composite objects, it'll talk to the CPU (via PCIe bus), which then talks to the system storage device or memory, depending on if that data happens to already be loaded in volatile memory. The SSG bypasses this process by storing files for entire projects locally. Those files remain resident until cleared by the application or user, and only need to be migrated to the SSG once (unless cleared regularly) when working on a project. In this way, it acts as proper solid-state storage; this is not your standard volatile VRAM.

Let's take an example of an architectural CAD model. You might be marking a city or using ray-tracing to determine where light will hit with your building – in Europe, there are laws restricting buildings to prevent light blockage to other buildings, which can be modeled with ray tracing. To load massive CAD models can take huge amounts of time as the GPU ping-pongs with system storage, from minutes to an hour, in some of the use cases that AMD has detailed to GN. An SSG means we eliminate the communication over PCIe to the CPU, then from the CPU to storage. That's a lot of latency and physical distance – we've asked for a specific number on latency, but haven't gotten one yet – and it's all cut by transacting locally. The GPU can now communicate directly with local storage when its own VRAM capacity has been exceeded or is tapped for other implementations. AMD's rep told us that the card would have 4GB “or more” of VRAM.

The card is being sold with a development kit exclusively right now, but will eventually be sold standalone for cheaper than the $10,000 dev kit price. The dev kit includes with it the card, dev support, an AMD-built API, and documentation. It's not possible for this card to just be used out-of-box, and applications must make specific changes to allow files to be stored locally on the SSG.

Once all that software is built, the GPU will be able to dump geometry, textures, shaders, and other models into the SSG rather than limited VRAM. This will help with real-time scrubbing and camera angle modifications.

AMD tells us that processes moved to the SSG are functioning on average 3-4x the speed of using system storage. We'll have more info closer to availability, which will be in early 2017.