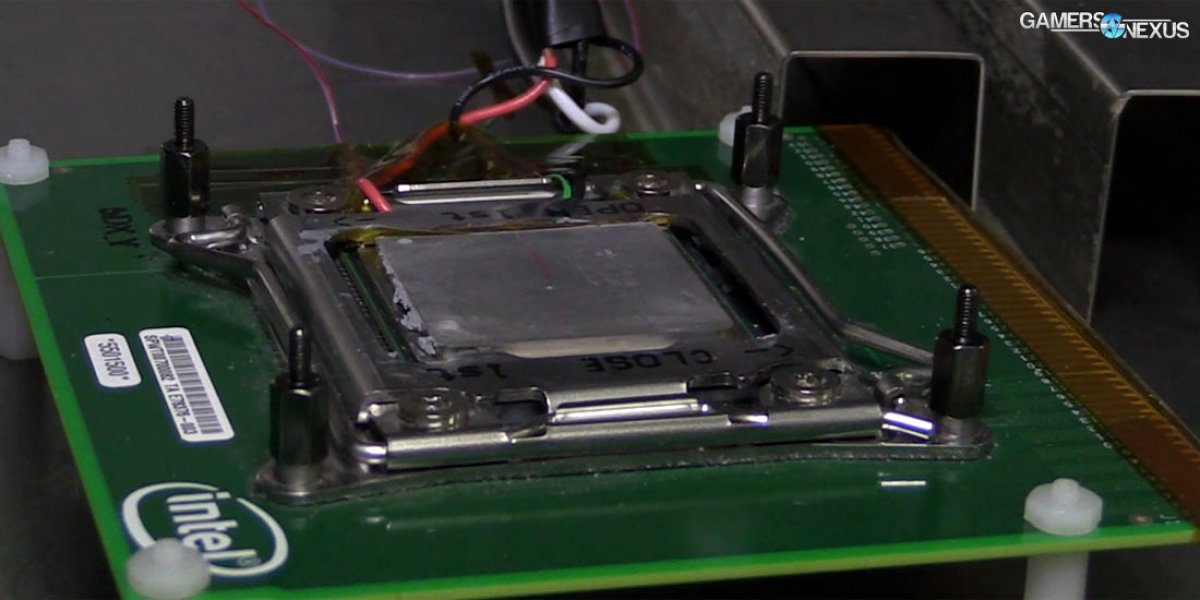 We toured Corsair's new offices about a year ago, where we briefly posted about some of the validation facilities and the then-new logo. Now, with the offices fully populated, we're revisiting to talk wind tunnels, thermal chambers, and test vehicles for CPU coolers and fans. Corsair Thermal Engineer Bobby Kinstle walks us through the test processes for determining on-box specs, explaining hundreds of thousands of dollars worth of validation equipment along the way.

This relates to some of our previous content, where we got time with a local thermal chamber to validate our own methodology. You might also be interested to learn about when and why we use delta values for cooler efficacy measurements, and why we sometimes go with straight diode temperatures (like thermal limits on GPUs).

Why Use a Thermal Chamber?

A thermal chamber is desirable for any kind of validation testing that determines product specifications and advertised capabilities. Its most basic function is to isolate a defined area of space with a fixed temperature (at least, that's how we use them), as this eliminates normal fluctuation of ambient and of external HVAC systems that humans need in their workspace. Just in our internal testing, we've seen fluctuations upwards of ~3~4C during a single test pass for CPU cooler performance. Any number of things will impact room ambient temperature – humans entering and exiting the room, air or heat toggling during the test, and the test itself (which generates heat and increases ambient). This raises the “floor” of the cooler's performance, and so that temperature change must be accounted for in testing.

For our media purposes, we use thermocouple readers and K-type thermocouples placed around the test environment. We often use two thermocouples for validation – one at cooler intake, one above the test bench (outside of its airflow) to measure true ambient of the immediate area. In our testing, as we've explained in the past, GN will then deduct these values as appropriate from test results, second-to-second, to output a temporally accurate representation of diode temperature vs. ambient temperature over time. Compared to other, less equipment-intensive methods – like checking a thermostat at the start and end of the test – this is far more accurate and completely accounts for ambient temperature increase during a test procedure.

Corsair's gone a step further, and for good reason: They're selling the product, they're marketing the product, and they're the ones responsible for fulfilling various legal requirements when undertaking such an endeavor. For Corsair, more accuracy is required for tests, and the same equipment used for validation can be used for critical R&D that helps the company remain competitive in a crowded space. 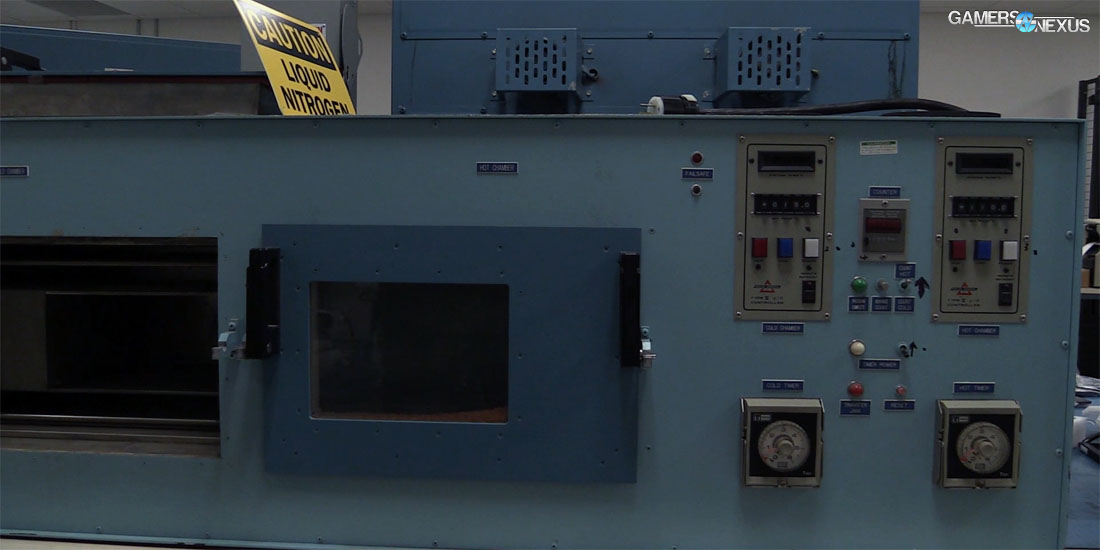 When we asked Kinstle about the different types of thermal chambers available, the engineer answered:

“A thermal chamber is a heater or a refrigerator in a highly insulated box, so you set the temperature you want on [this panel], and that can be a high temperature or a low temp, whatever you're trying to test for, and then it maintains that temperature. Some of them are programmable so they can go through different temperature ranges. These are basic temperature-only chambers, but they also make humidity control chambers, some chambers with liquid nitrogen for extreme cooling, some have shock & vibration tables in them for extreme vibration, some have dry air injection so they can get to extremely low humidities or temperature conditions, but for this industry, just temperature seems just fine.

“If you're building products for a very highly humid environment, like Southeast Asia, or you're concerned about corrosion or delamination of your circuit-boards, you would definitely want a humidity chamber. We do that kind of testing, just not at this facility.

“The more humidity is in the air, the more heat the air can carry per unit of volume. That's because the air density increases, so if you have a cubic foot of air at 20% humidity, you're going to be able to carry a little bit less heat than a cubic foot of air at 80% humidity. In that regard, even though high humidity is very uncomfortable for us people, it actually helps the computer carry heat better."

In this regard, theoretically, identical tests would output at least slightly varied performance in different test conditions. It's most important that the tests are conducted consistently and in a repeatable environment or setup; this allows a more simple delta comparison between products. This is Test Methodology 101, but conducting tests under different conditions and in different locations (without some sort of control – like a high-end thermal chamber) could output muddied test results. That's why GN doesn't use remote contractors or employees to perform tests – we want it all conducted at a central hub for the best control.

Corsair does something a step further and implements a Thermal Test Vehicle (TTV) from Intel, which is effectively a “CPU analog” – a fake processor, but with the same socket size and fitment as an Intel 2011 socket CPU. The TTV can be tuned to specific wattage and voltage via an external, DC power supply, which is useful for simulating various types of CPUs and overclocks, but without requiring independent system tuning. Corsair does test its coolers on fully built systems, but the TTV is used in validation and R&D. Of the TTV, Kinstle told us:

“We have a setup for testing processors. We use a thing called a 'thermal test vehicle,' which is an actual processor made by Intel, and it goes into an actual processor socket and has the same mounting as a heatsink, and you can attach a heatsink to it. The wires come out of this thing and go to a power supply, and it's just a heater. It's just a heater chip – it doesn't actually compute. You can say, 'I want 100W [...]'

“It has a Socket 2011 sized CPU device here, it has a heater built into it. The heater is the same size as the microprocessor in real-life, so it has the same heat-flux per square millimeter as the real processor. This line [on top] is a thermocouple, I can measure the temperature of the heatsink, or the temperature of ambient, and then calculate the effectiveness of the heatsink in degrees C per watt. […] I know exactly how much power is going in, I know exactly how much heat is going out.

“It actually measures the voltage at the TTV, instead of the voltage [at the DC power supply], so it compensates for the voltage drop in the wire.” 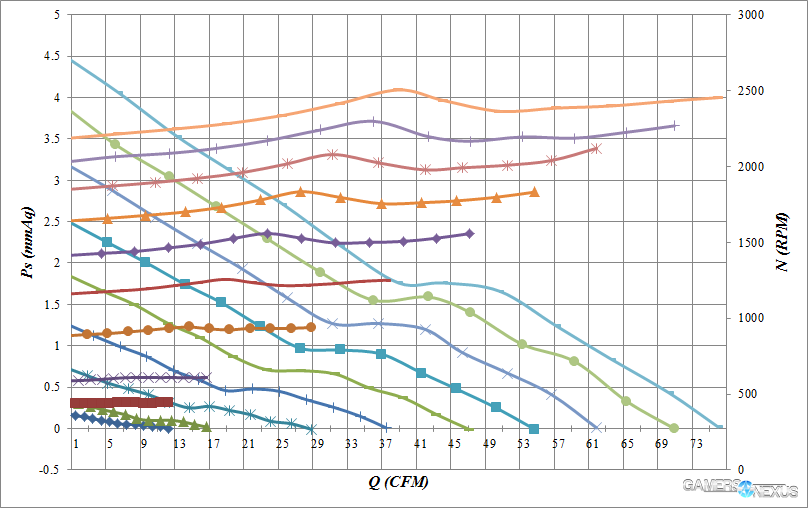 This is an area of testing we haven't yet ventured into, but hope to soon explore. CFM and pressure testing on fans requires wind tunnels with specific controls and measurement instruments. Corsair's costs $75,000 – not a reasonable buy for a media outlet – and is ultimately used to confirm specifications that land on product boxes. Kinstle walked us through some recent test data from a mag-lev bearing fan:

“Each line represents the pressure and flow at a particular point. The maximum pressure spec that you see on the box is always measured at 0 flow. The wind tunnel closes itself completely, runs the fan at a speed, measures the pressure at this location, and then plots that point here [Kinstle indicates on the chart]. This point is not useful to system designers other than to just have some way of comparing the system, because this doesn't occur in real life. If you have 0 flow, it's not doing any good for you at all.

“The wind tunnel begins by opening valves inside and allowing some air to flow from the first chamber into the second chamber. That reduces the static pressure and the flow increases, so as that happens, the next data point is [here], then it opens up some more. It works its way all the way down until the pressure [in the front] equals atmospheric pressure, and that is the zero resistance point, or maximum flow – which is the other spec you see on the box, which also doesn't occur in reality, because if you don't have any resistance, there's nothing in the way of your fan. In reality, your system will be somewhere in between these points. You can plot a resistance curve for, say, a radiator, and that curve will go up in [this direction] and where those two curves intersect is the actual pressure and flow that you'll receive when you combine those elements in a system. That's the really useful information. Each one of these lines is a different speed – 100%, 90%, 80%, and so on, all the way down to 20%. The horizontal lines are the fans RPM, and so the blue line corresponds with the orange-peach line, green line with the purple line, and it shows the RPMs over [here]. As you can see, this fan is very stable regardless of the resistance it receives. It doesn't fluctuate very much.

“All the published specifications for all of our fan products come out of this machine. This machine costs about $75,000, and once a year I fly a guy out from Taiwan to calibrate it. His calibrations are NIST traceable, and you can go to the NIST website and look it up. I am very confident in the performance data that comes out of this machine.”

To learn more about how the wind tunnel functions, we'd recommend checking out the interview above.