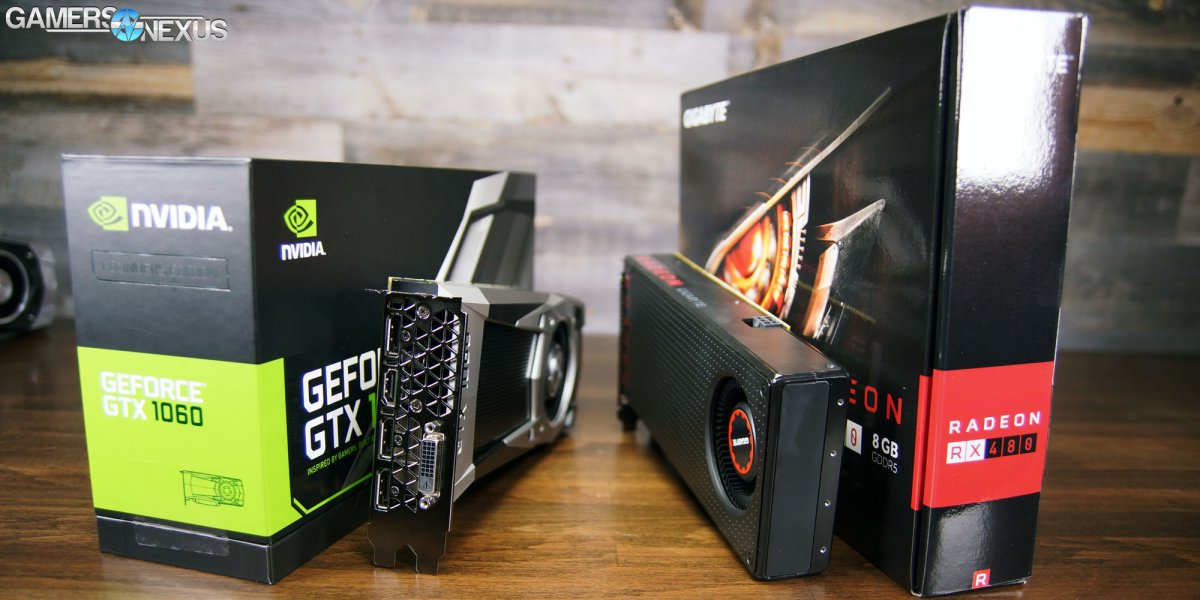 Here is the previous content that may prove useful:

(Note: As always, you cannot compare cross-brand architectures. Don't compare core count or clock-rate between these devices, as they function differently.)

The focus for this content is entirely on a head-to-head between the cards, because we've previously stated that the 4GB 480 and 3GB 1060 units should only be bought for specific budget use cases, given flanking options. If you know you're buying one of those two, we're providing a cursory look at performance. If you're yet undecided, check our above-linked reviews for a wider listing of GPU performance.

In this head-to-head comparison, we're using reference clocked cards from each vendor, so there are no AIB partner pre-overclocks here. Note that, as always, you can obviously net higher performance with AIB partner models that are pre-overclocked. Noise and temperatures will be lower, too – but we're just looking at FPS today, and using stock clocks as a baseline. Extrapolate from here.

All of these tests were run fresh, as there have been a number of driver updates since our previous RX 480 4GB analysis. The card has changed enough in that time to mandate a refresh of tests.

AMD 16.10.1 drivers were used for the RX 480. NVidia's 373.06 drivers were used for game (FPS) testing on the GTX 1060. Game settings were manually controlled for the DUT. All games were run at presets defined in their respective charts. We disable brand-supported technologies in games, like The Witcher 3's HairWorks and HBAO. All other game settings are defined in respective game benchmarks, which we publish separately from GPU reviews. Our test courses, in the event manual testing is executed, are also uploaded within that content. This allows others to replicate our results by studying our bench courses. In NVIDIA's control panel, we disable G-Sync for testing (and disable FreeSync for AMD). Note that these results were all done with the newest drivers, including the newest game patches, and may not be comparable to previous results. DOOM (as an example) has had several performance patches that impact framerate, alongside a few driver updates between vendors.

For Dx12 and Vulkan API testing, we use built-in benchmark tools and rely upon log generation for our metrics. That data is reported at the engine level. Game settings are shown in chart titles. For specific settings, view our game-specific benchmark content.

Gears of War 4 is a Windows Store title that operates on DirectX 12, which we recently tested in a separate benchmark for most current GPUs. We use PresentMon to test the game, built by Intel and Microsoft, and then leverage our own in-house scripts to analyze the frametime data. This produces the usual 1% and 0.1% low numbers that you're used to from our content.

Gears of War 4 at 1440p/Ultra remains playable on each device, though framerate is dragged down to 75FPS AVG on the GTX 1060 3GB card and 68FPS on the RX 480 4GB. The low percentage performance is just shy of 60FPS on the GTX 1060 3GB, but the output is tight enough for each device that the perception of game fluidity is largely the same with each GPU. That said, the GTX 1060 is the victor in this particular benchmark, performing approximately 10% faster than the RX 480 4GB card.

With Vulkan at 1080p, the RX 480 is now just 3FPS behind the GTX 1060, and both are performing effectively equally when looking at gameplay, frametime deltas, and framerates. This lands the RX 480 just a couple percent off of the 1060. If you're running an RX 480 and DOOM, it's time to switch to Vulkan.

1440p with OpenGL shows a similar disparity between the GTX 1060 3GB and RX 480 4GB as in the first test. Swapping to Vulkan changes our output to be 72FPS AVG, with each card producing exceptionally tightly timed low values.

With Black Ops III at 1080p/High, we're seeing the RX 480 4GB card lead the GTX 1060 3GB card by about 14FPS in the averages, though AMD does have less reliable frametime performance. The variance in frametimes occasionally manifests itself in stutters during gameplay, with a silver lining in the fact that not every single test pass exhibits a stutter. This is more of a driver-side issue than a VRAM issue, since the GTX 1060 3GB does not exhibit the same behavior at 1080p/High.

This is where you'll have to make a judgment call, because the RX 480 does have better overall FPS than the GTX 1060 3GB card, but the occasional stutter will sometimes impact gameplay. They're not too frequent – you'll definitely see a few per match, though.

At 1440p, we're seeing similarly variable performance with occasional stutters, but overall superior framerate throughput to the GTX 1060 3GB – the gap is approximately 11FPS AVG, or about 16.5% favoring the RX 480 4GB for the AVG FPS. Stutters are a pain, but can be somewhat compensated for with settings tuning.

1440p performance shrinks the gap a little bit, as we're becoming bound by what these cards are capable of doing. The GTX 1060 3GB operates north of 60FPS for its average, with dips tightly timed and around the 50FPS mark. The RX 480 4GB card is also right around 60FPS for its average, though its low performance dips down to 36FPS 0.1% lows in some of the worst case scenarios. Still, not hugely different in visuals for the most part.

Mirror's Edge: Catalyst is an interesting test case. We've seen some issues with lower VRAM capacities when testing Hyper settings, but our main test is with Ultra at 1080p. The GTX 1060 3GB leads marginally, with a 2FPS gap that is effectively invisible to the player. What's not invisible, though, is the frametime variance. Frametimes are gapped enough on the RX 480 4GB card that we're seeing less than 30FPS in the heaviest stutters. Remember, it's that frame-to-frame delta that becomes observable as a stutter, and can create more jarring gameplay. The same is true for Hyper, though you're really not going to be playing with Hyper settings on either card – it's far too VRAM-intensive and taxing on shaders.

The GTX 1060 3GB card does have more consistent frametimes when looking at some games – like Mirror's Edge and Black Ops – but the card faces good competition from AMD. The RX 480 4GB card outperforms in averages with Black Ops III, though would require some settings tuning to eliminate that occasional hiccup. AMD is also showing significant scaling with low-level APIs that puts it in more direct competition with nVidia. The Gears of War 4 and Vulkan benchmarks prove this. Each device will allow 1080p gaming with Ultra settings, for the titles tested, and can scale to 1440p with slightly lower settings. NVidia tends to be more consistent in its driver performance for frametime consistency with the GTX 1060. The RX 480 isn't a bad option – AMD's significantly improved its drivers since our review, the company just has some more progress to make in some titles.

Ultimately, given the fairly close performance, this will come down to price and partners.

We were able to find both units available for $200 (see: EVGA GTX 1060 3GB SC, MSI RX 480 4GB). The RX 470 is also worth a consideration if you can find one for around $180. The GTX 1060 3GB, despite our issues with its naming and market positioning, is doing well for its price position. The RX 480 outperforms in averages in Black Ops III, yet falls short in frametime consistency. Both cards are generally within ~10% of each other, depending on game, with the 1060 generally leading. We hope that you can take this data and make purchasing decisions, as AIB partner models will ultimately dictate which card should be bought.