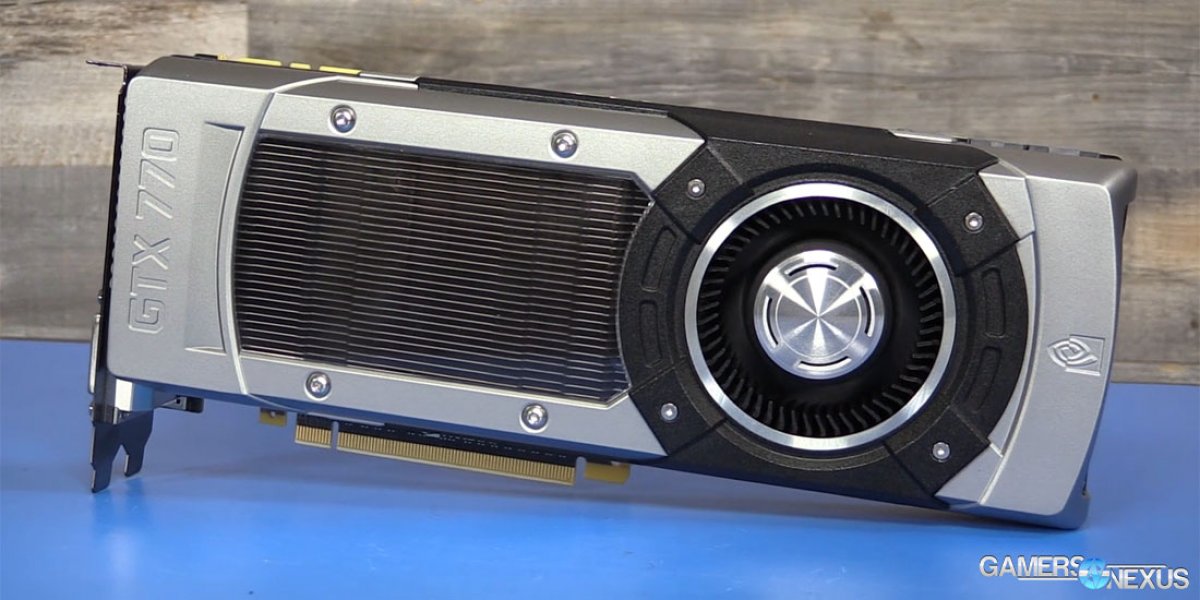 It's probably about time for an upgrade for GTX 770 owners. Don't get us wrong: The GTX 770 2GB can still hold its ground just fine, but only with the assistance of settings reductions when playing modern AAA titles. Even for "just" 1080p performance, the likes of Ultra and High aren't necessarily feasible in games like Battlefield 1.

Resolution is a worthwhile side-point, too. Last time we talked about the GTX 770 in depth, 1080p was really the only resolution worth considering from a review standpoint. We certainly didn't have 4K monitors in the lab yet, and 1440p was still only a small fraction of the market. With 1920x1080 holding more than 80% of the gaming market today, it's easy to believe that the share was even greater in 2013.

Things are changing, though, and the industry is evolving. We talked about this in our GTX 1060 and RX 480 reviews, both devices that are capable of 1440p gaming with relatively high graphics settings. Considering the price of each card, around $240-$250 for the bottom line devices, that's a major accomplishment for this year's GPU architectures.

The GTX 770 operates on Kepler architecture, which preceded nVidia's Maxwell and current Pascal GPU architectures. At the time, AMD's most direct competition was the 200 series, including the R9 280X and 290 cards. The GTX 770 shipped in 2GB or 4GB quantities, with reference using a 2GB memory configuration. The GTX 770 hosts 1536 CUDA cores with a base clock of 1046MHz and boost of 1085MHz, but there are a few important things to note here.

First of all, a core does not necessarily equal a core. You can't always directly compare devices between architectures. CUDA cores became about 40% more efficient in performance per watt with generational increases, and that's without acknowledging Pascal's improvements. Newer cards with fewer cores can still outperform the 770's 1536 CUDA cores, and that's a result of the block layout, cache, process node, subsystems handling compression or job management, frequency, and any number of other variables. We talked about a lot of these in our GTX 1080 and GP100 architecture deep dives, if you're curious. The GTX 980 review also contained information more relevant to the Kepler->Maxwell jump.

Boost has also changed significantly. Boost 3.0 now modulates the frequency to such a degree that all cards are effectively auto-overclocked by looking at thermal headroom, power headroom, and voltage headroom to the core. The more room these three measurements can afford, the higher the clock boosts -- and it does so until it hits a limit, which is often power on partner designs and thermals on reference designs. With the GTX 770, the clock was pretty simple: You play the game, it hits a max specified speed and mostly stays there. Boost relied on fewer variables "back then," all those years ago, and removed a lot of variance between devices. You'd also get less performance overall out of the device, though, compared to today's cards where 90% of the overclocking is done for you.

We're focusing solely on FPS testing for today. We also only have this GTX 770 2GB reference unit, so your overclocked models may vary in performance. If you're wondering why we aren't testing Model X or Model Y that you own, it's because we don't own it. This is the GTX 770 we have. It's still a strong baseline for performance, and will still be closer to pre-OC 770s than most modern equivalents.

Our Battlefield 1 testing methodology is defined in our BF1 GPU review, posted here. 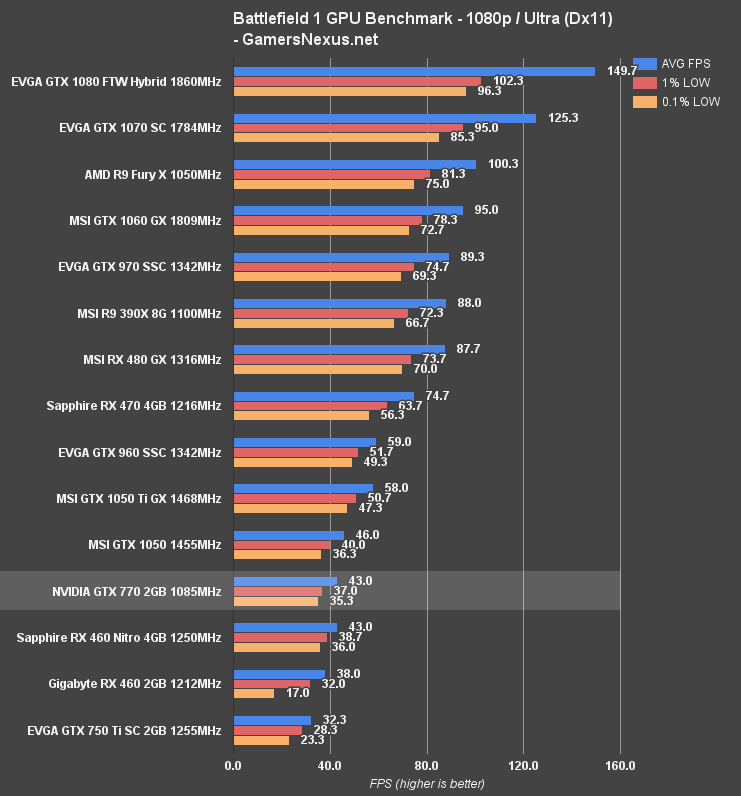 Looking at 1080p/Ultra performance with DirectX 11 (ignoring Dx12 for this test), the GTX 770 is capable of outputting 43FPS AVG with lows around 37 and 35FPS. That lands the card just below what the GTX 1050 is capable of and about the same as what the RX 460 does. If this sounds too low, keep in mind that generational changes also mean waning driver support and optimizations for older hardware. The drivers used do have optimized BF1 performance for Kepler, but the 770 with 2GB VRAM is still well below the GTX 1050 Ti, and is approximately 3x slower than the GTX 1070. Considering the GTX 770 was originally $400 at launch, the GTX 1070 would be both the namesake replacement and the price-point replacement for the 770. Such an upgrade moves performance from below 50FPS to above 120FPS AVG at 1080p, with the GTX 1070 sustaining lows well above 60FPS.

Just upgrading to an RX 470 would be a worthwhile jaunt in this title, and at an affordable price, but a $200 investment in a GTX 1060 would yield framerates nearing 100FPS at 1080p. If you're upgrading your GPU but keeping the monitor, one of these devices would make a lot of sense. A 1440p monitor upgrade in-step with the GPU would match well with a GTX 1070. 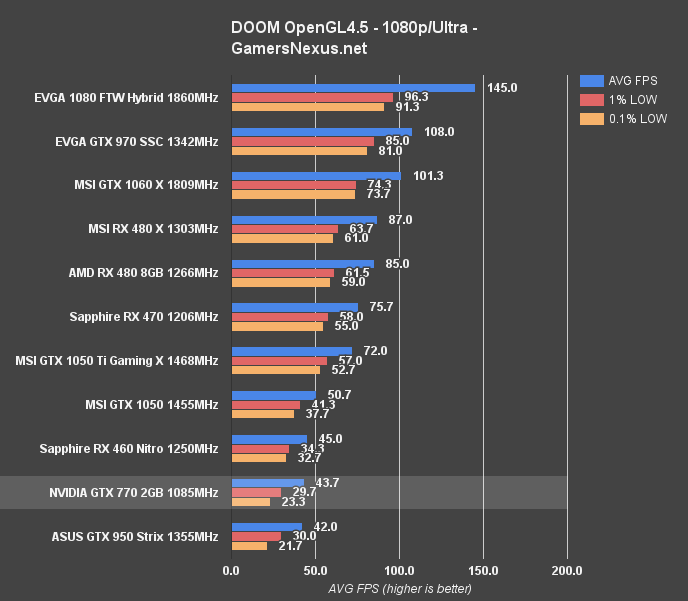 With DOOM at 1080p and using OpenGL, we're seeing the GTX 770 output a framerate of about 44FPS AVG, with 0.1% lows that dip nearing 20FPS. This places the card right around the GTX 950 and RX 460, both low-end devices that almost feel like they should still be worse than the 770. 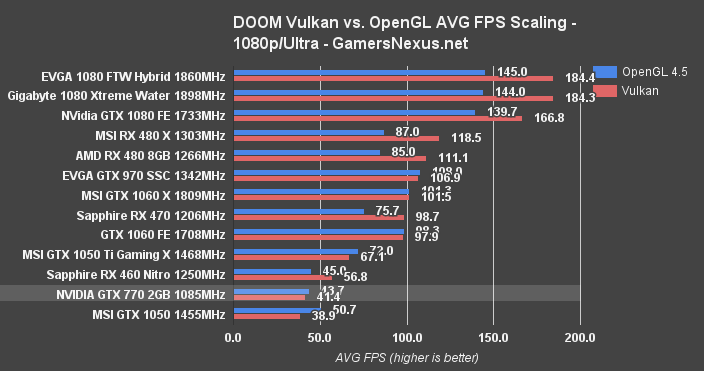 When we switch over to Vulkan, performance still has the GTX 770 around 40FPS AVG, easily outperformed by nearly every other card in the stack. 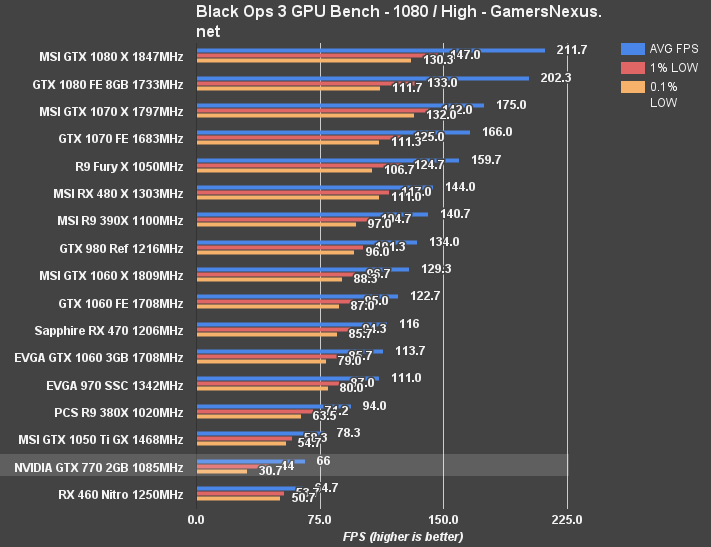 Looking at Black Ops III with the memory limitation disabled, we're posting an average FPS of 66 at 1080p with High settings. The $165 MSI GTX 1050 Ti Gaming X, meanwhile, is operating at 78FPS average with lows closer to 60FPS. The R9 380X outperforms the GTX 770 reasonably, but this is also a title which tends to show AMD more favor than in some other games. 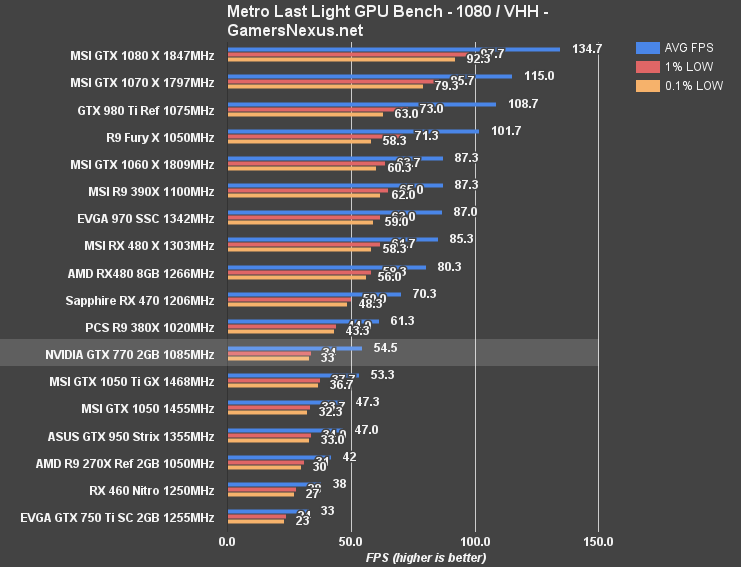 If we look at older games, like Metro: Last Light, we see the GTX 770 is able to keep up better with the GTX 1050, GTX 1050 Ti, and R9 380X. We think this demonstrates well the differences that driver support can make, since newer games will get their most immediate driver development focused on the flagship architectures from each vendor. Metro hasn't needed updates for some time now -- it's a stable game that released years ago, and is pretty much stagnant in both game and driver development. The GTX 770 does well here, relative to its performance elsewhere. The 1070 outperforms the GTX 770 by about 2x, with the 1080 beginning to cap-out against a performance ceiling with the CPU. 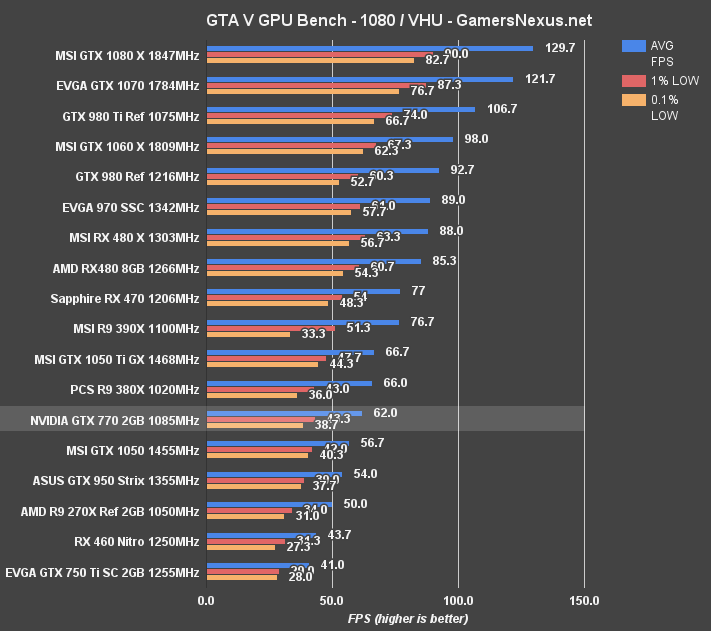 Still, though, the GTX 770 is what you'd considering "playable" for GTA V at these settings.

Check the link in the description below for Mirror's Edge: Catalyst benchmarks, along with some additional information. 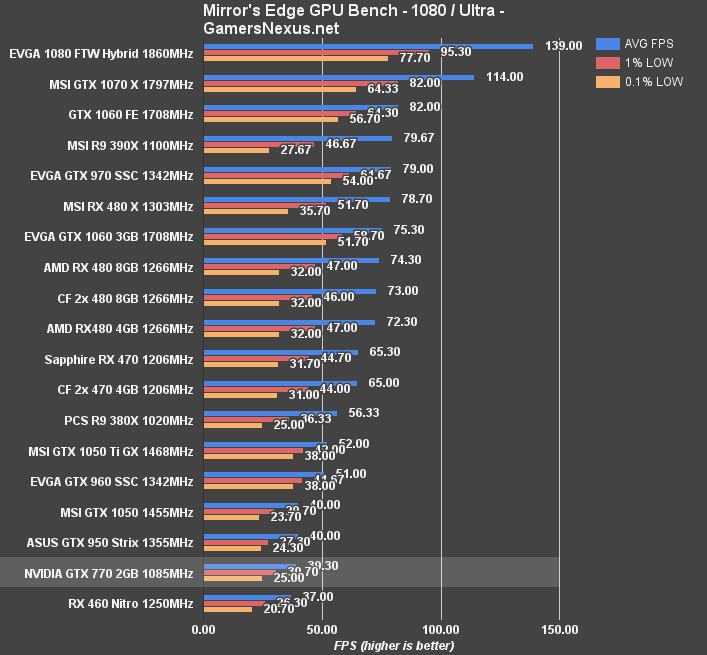 The GTX 770 2GB card barely manages Mirror's Edge: Catalyst at ~40FPS, and has lows that are far down enough (25FPS 0.1% low) to interfere with game time. You'd have to run MEC at a lower quality setting to properly play, which is certainly possible -- there's a lot below "ultra." This test isn't to show that the GTX 770 can "no longer play games," because that's wrong; but it does show that, for games like MEC, a newer card is required to sustain maxed quality settings. 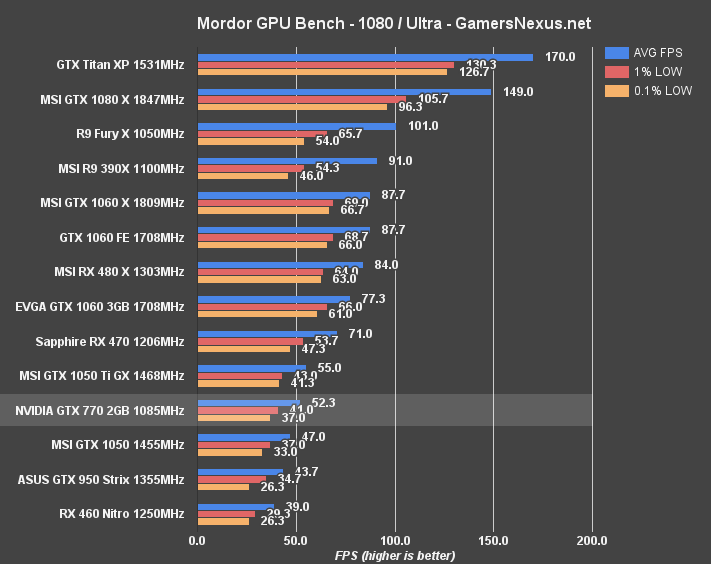 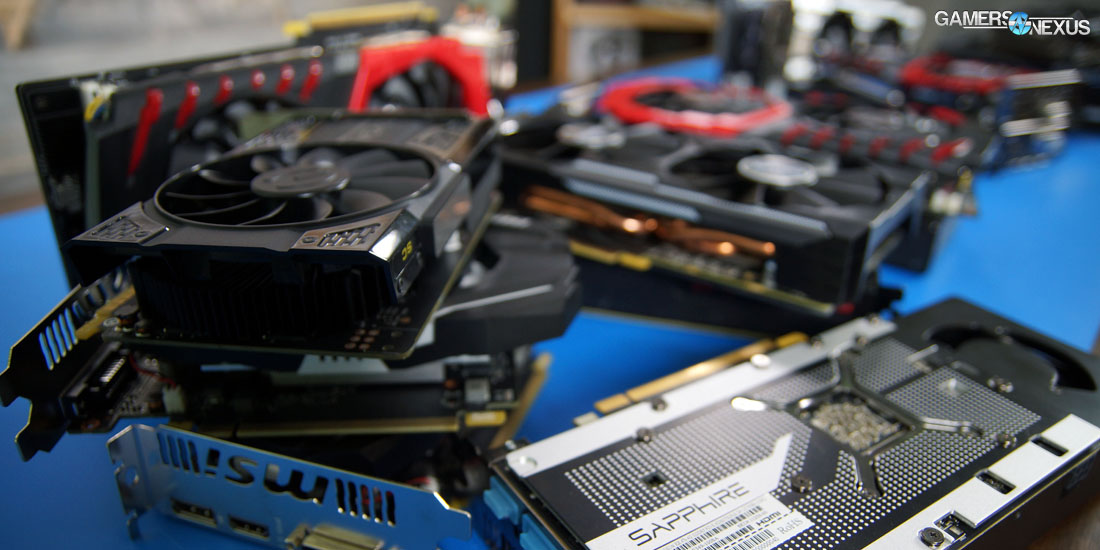 For the most part, the GTX 770 is still capable of playing modern games like Battlefield 1, but you'd have to reduce settings to sustain those higher framerates. If keeping graphics quality settings closer to ultra or high is important, there are a few options for upgrades.

The linear step would be the GTX 1070, which offers anywhere from a 2-3x gain in performance at 1080p with games tested. This jump would also allow you to upgrade to a 1440p monitor or greater. If trying to keep a 1080p monitor setup to stretch out investment, buying something like the RX 480 or GTX 1060 would make the most sense as a mid-costed option. The RX 470 does post reasonable performance gains over the GTX 770, upwards of 24% in some titles, but it just doesn't feel quite worth the upgrade when considering the relative performance of RX 480 and GTX 1060 models.

It's not often that we have to talk about monitor upgrades at the same time as GPU upgrades. The past few years have mostly assumed a 1080p display as a constant, and that's finally changing. This generation is really driving toward more widespread 1440p or UltraWide gaming, as the $250 cards can handle 1440p pretty well in most games. Check our GPU reviews for more on that.

In the meantime, this hopefully provides a look at gaming performance of a two-generation old card as it stacks versus modern architectures. If you'd like to help us with our content production, try supporting us on Patreon, following us on Twitter, or subscribing on YouTube.