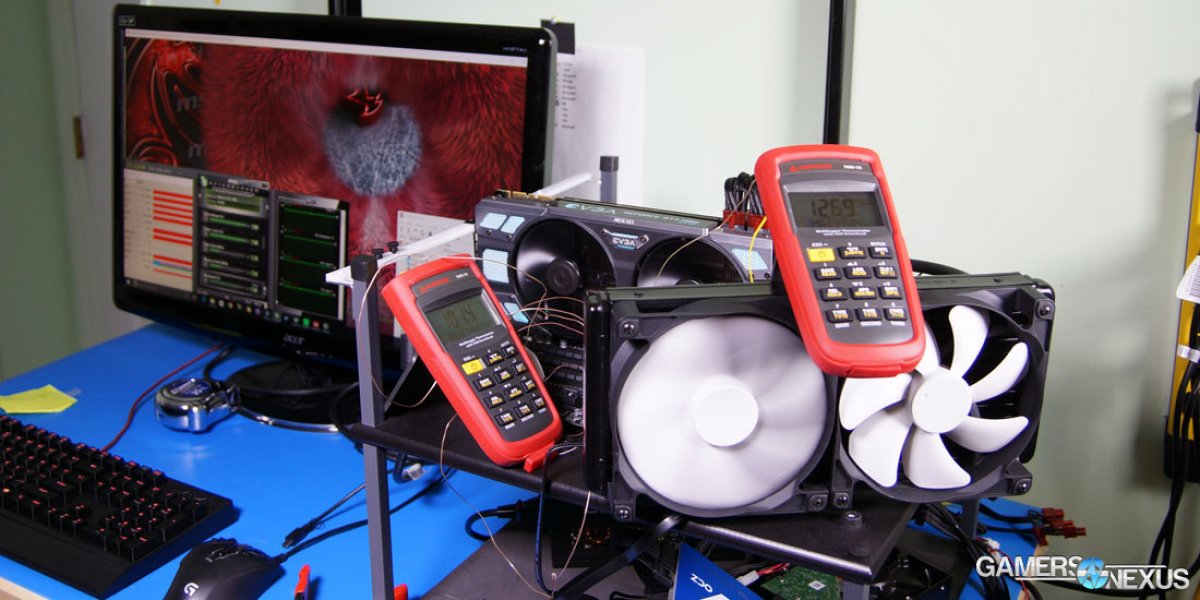 This next chart had some manual tuning going on about half-way through the test, so keep that in mind as you read the content. It's not a set run-and-done benchmark, as the others were. We manually tuned the fan profile and settings to attempt to create worse (but not worst) scenarios for testing. The worst case scenario will be our torture test, on the next page.

The first half of this test was without any tester interference at all. We're at around 90-94C for the FETs and the PCB temperatures, with GPU temperatures maintained around 81C -- the thermal limit to which fan RPM will slave -- and that triggers a fan RPM of about 80%. 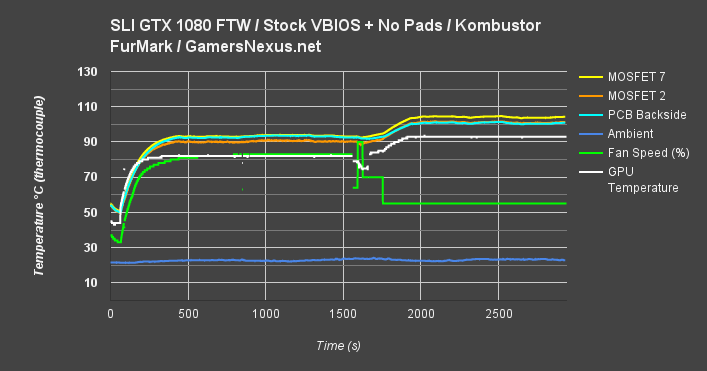 This is where we decided to start playing with the idea of torture testing, and so we dropped fan RPM back to its 60% speeds (from auto) that a single card would exhibit. This pushes the temperatures up to about 105-107C and is quieter, but not realistic for a user.

Here's the interesting part. You might have noticed that the VRM component temperatures for SLI with FurMark are actually lower than the temperatures we saw with a single card. That's because of the GPU. The fans are not aware of the temperature for any other component on the board. The entirety of PWM for the fans is governed by the GPU, so the hotter the GPU core gets, the faster the fans will run. The fans, for all intents and purposes, have no idea that the VRM exists. Because SLI basically guarantees that at least one device is constantly under threat of exceeding 90C GPU core, let alone its 81C threshold, the fans spin-up and run faster than what a single card's profile will normally allow. Our speeds hit around 80% when auto-controlled. That cools the GPU, but the VRM fan is also spinning faster, thus cooling the VRM components.

So, if you've got an SLI configuration, it's not so grim. You should still update VBIOS, but this isn't a doomsday scenario. With a hot case, you'll run into more issues -- it's still not terrible, though.

If you want to see how just the thermal pads perform without the VBIOS update, check the article for that. 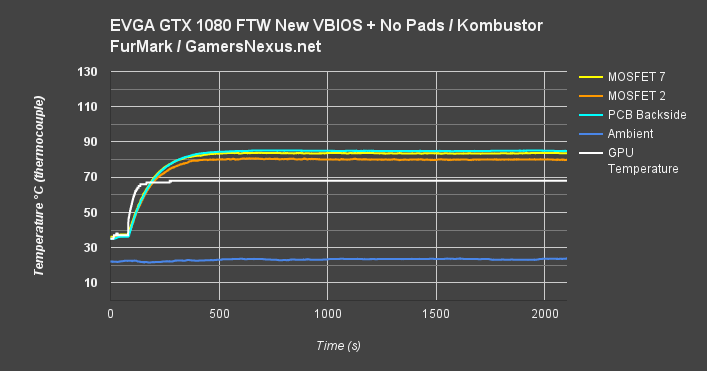 Here's the first chart of the VBIOS updates. This one shows the FTW VRM with the new VBIOS, but without the thermal pad mod. We're hitting temperatures of around 85C on the PCB and around 80C on the 2nd MOSFET. Compared to the stock card with the original VBIOS, this more aggressive fan speed profile improves performance by about 6-10C on the VRMs and about 15C on the PCB. This is mostly the same as what we reported with the original PCB temperature during thermal imaging, and reconfirms our statement that the VBIOS update alone is enough to resolve issues. 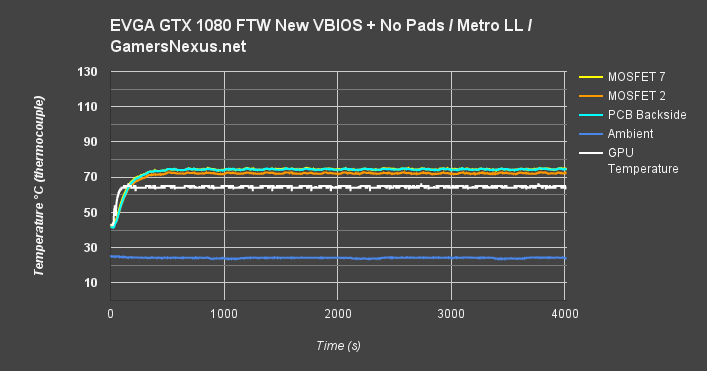 And here's what it looks like with a video game. This is Metro: Last Light at some of its most demanding settings on the GPU side, looped for a full hour. The outcome is temperatures around 75C on the PCB and MOSFETs. That is more than just acceptable -- these VRMs can handle way higher heat than that. And this, mind you, is with an ambient temperature of about 23-25C, as opposed to the earlier ambient values nearer 20C. 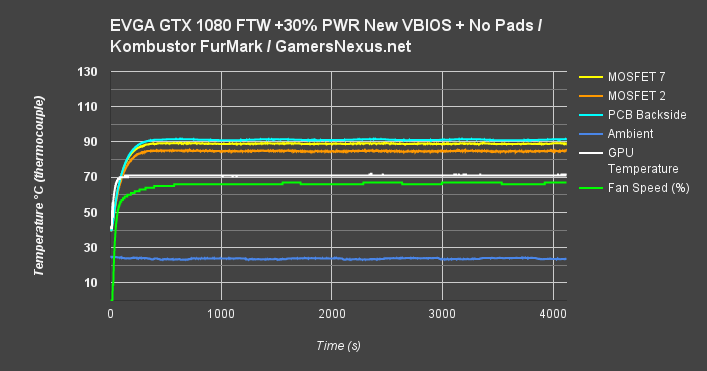 Last chart for the VBIOS updates; at least, before we move on to the thermal pad mod. This chart shows overclocking of +30% with the Master switch, and overvolting of +100%. The VRMs are hitting temperatures of around 85-90C, which is an improvement of more than 10C when looking at the old VBIOS and its OC performance. Again, those are acceptable temperatures. 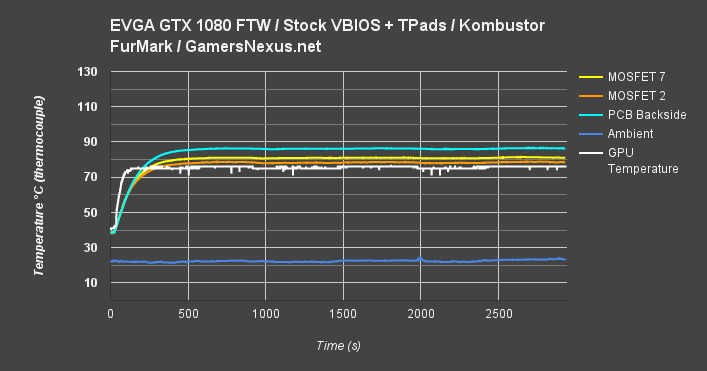 With FurMark and the thermal pads, but the original VBIOS, we see a change that results in thermal performance of <90C PCB backside, or right around 80C for MOSFET #7. MOSFET #2 is closer to ~77-79C. 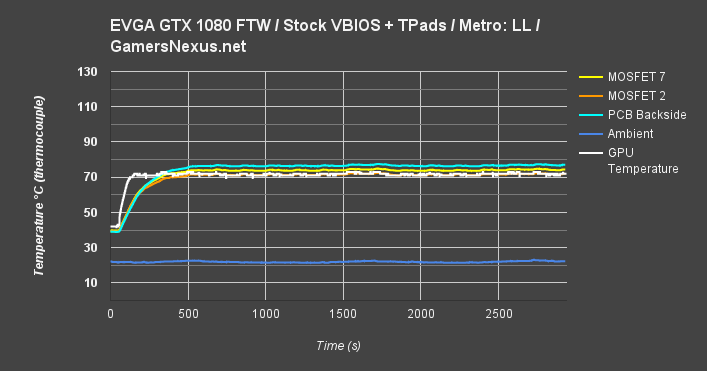 For Metro, similar scaling is seen. The temperatures are below 80C across the board. If you wanted, based on these results, you could go with just the thermal pad change and forgo the VBIOS, if the quieter fan profile is preferred. 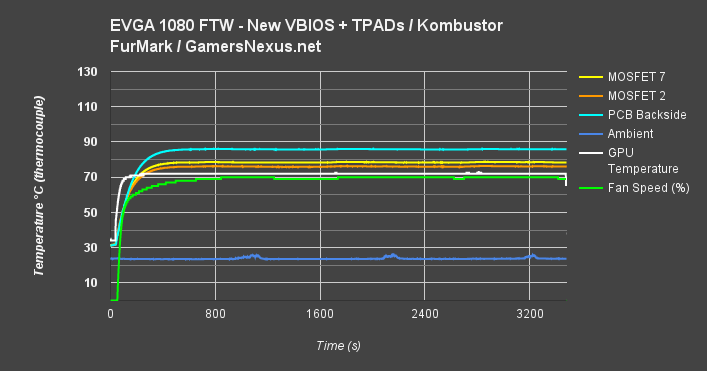 And here's a look at thermal pads in addition to the new VBIOS, when running FurMark and stock clocks. The card is way below where it was stock -- somewhere to the tune of 20-30C, depending on which test and component you look at.

Continue to the final page for the torture test, where we actively try to set the card on fire.