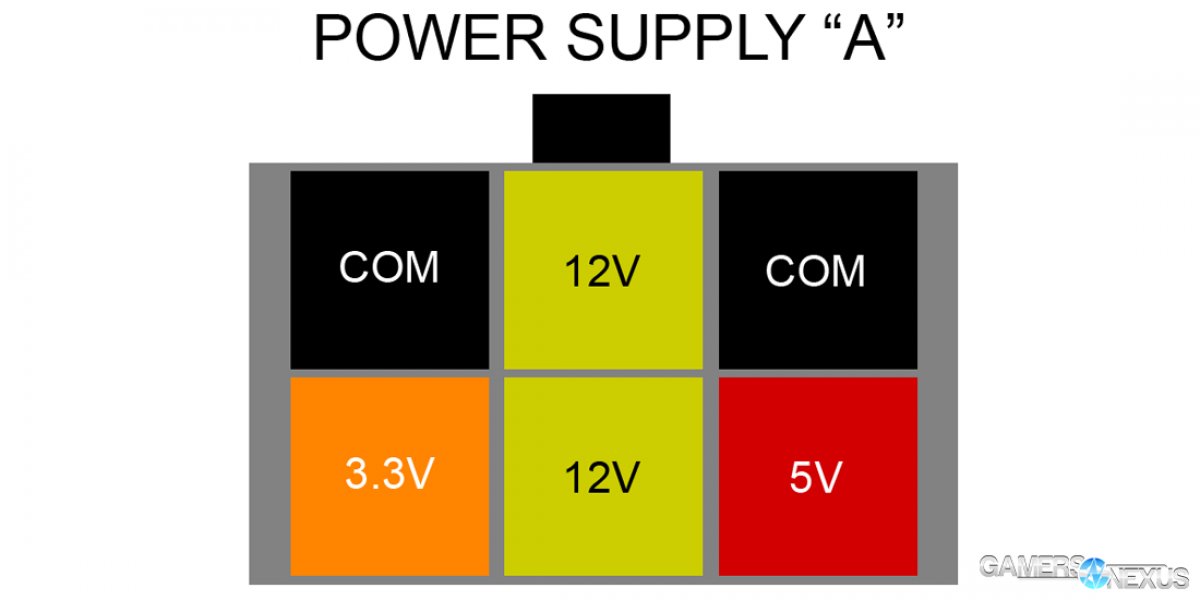 There are two ends to a power supply cable: The device-side and the PSU-side. The device-side of all PC cables is standardized. ATX 24-pin, EPS12V, PCI-e to the GPU, SATA—the wiring is known, and it doesn't change. What isn't standardized, however, is the layout of the PSU-side modular cable headers. Some vendors might use 6-pin connectors for their PSU-side peripheral headers (identical to what's found on PCI-e cables, because it saves cost), others will opt instead for a wide-format pin-out for the same. Another still could use a bulky 9-pin block for universal connectivity, like some of EVGA's power supplies.

What can't be done, though, is mixing cables between all these units. Or at least, it shouldn't be done. Mixing cables between power supplies can kill them or kill attached components. Not always, but it can -- and when the wiring crosses in exactly the wrong way, the failure will be spectacular. Like ESD, just because you've gotten away with mixing cables doesn't mean you always will. Electricity is not a mystery; we know well how it works, and crossing the wrong wires will damage components.

What Happens If You Mix Cables? 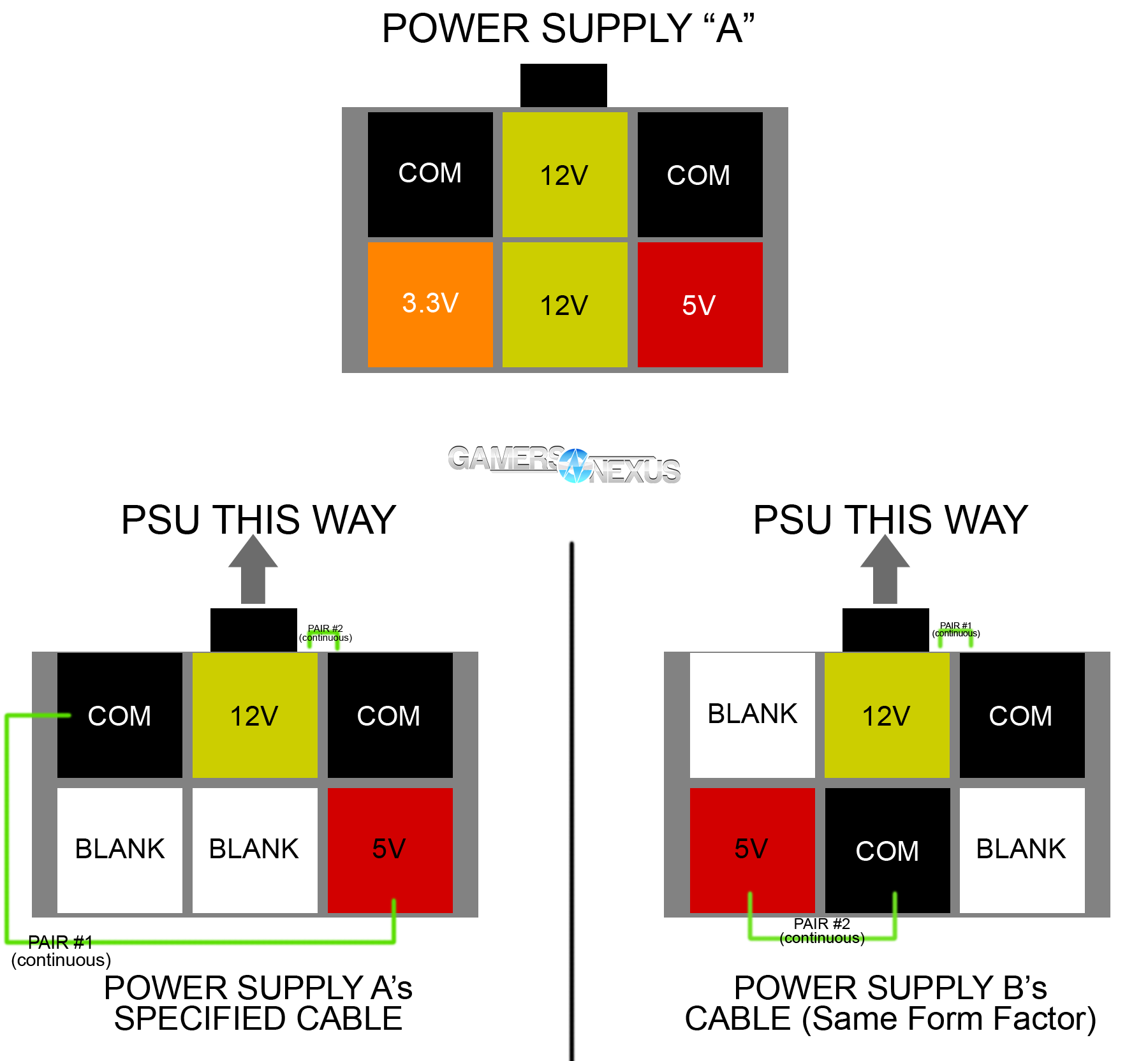 Above is a pin-out chart that we made, depicting two actual pin-outs for cables which are seemingly compatible. The top pin-out is the PSU-side (where the modular cable connects), looking at it straight on. The bottom left is its anticipated and specified connector, and the bottom right is a connector from an EVGA PSU which is physically compatible, but not electrically compatible.

Connecting these two ends, PSU "A" to Cable "B," we could end up with a catastrophic result -- or be perfectly fine. It depends on what device is hooked to the peripheral connector (MOLEX or SATA). With this particular pin-out, connecting a 5V device (like an SSD or 2.5" laptop HDD) would result in nothing we want. The PSU wants to push 5V through its bottom-right pin, from this perspective, and the specified cable wants to pull its 5V supply from the paired bottom-right and top-left red & black cables. Were we to connect cable "B," the EVGA MOLEX cable, we actually end up with reverse polarity. This leaves the PSU to protect itself with whatever mechanisms it has available (generally, PSUs will use OCP or OVP for such an event). 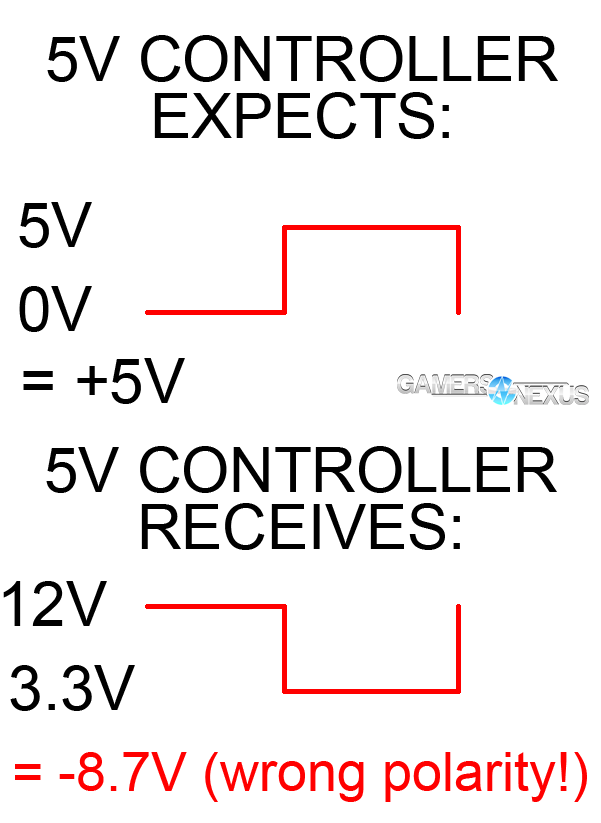 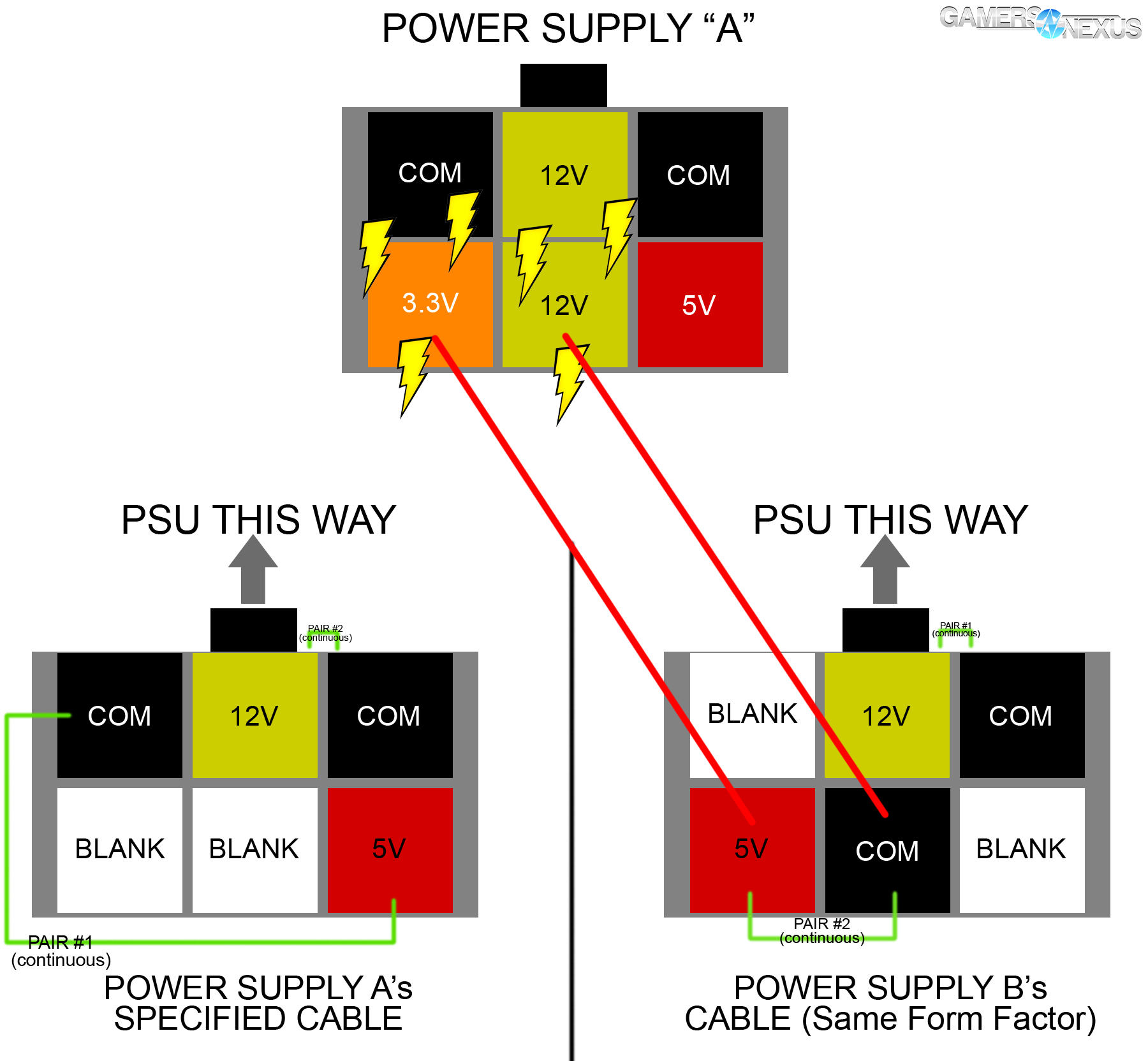 (Above: Bad luck. Mixed cables result in crossed wires. Below: Lucky. Mixed cables just happen to align a paired 12V with the PSU.) 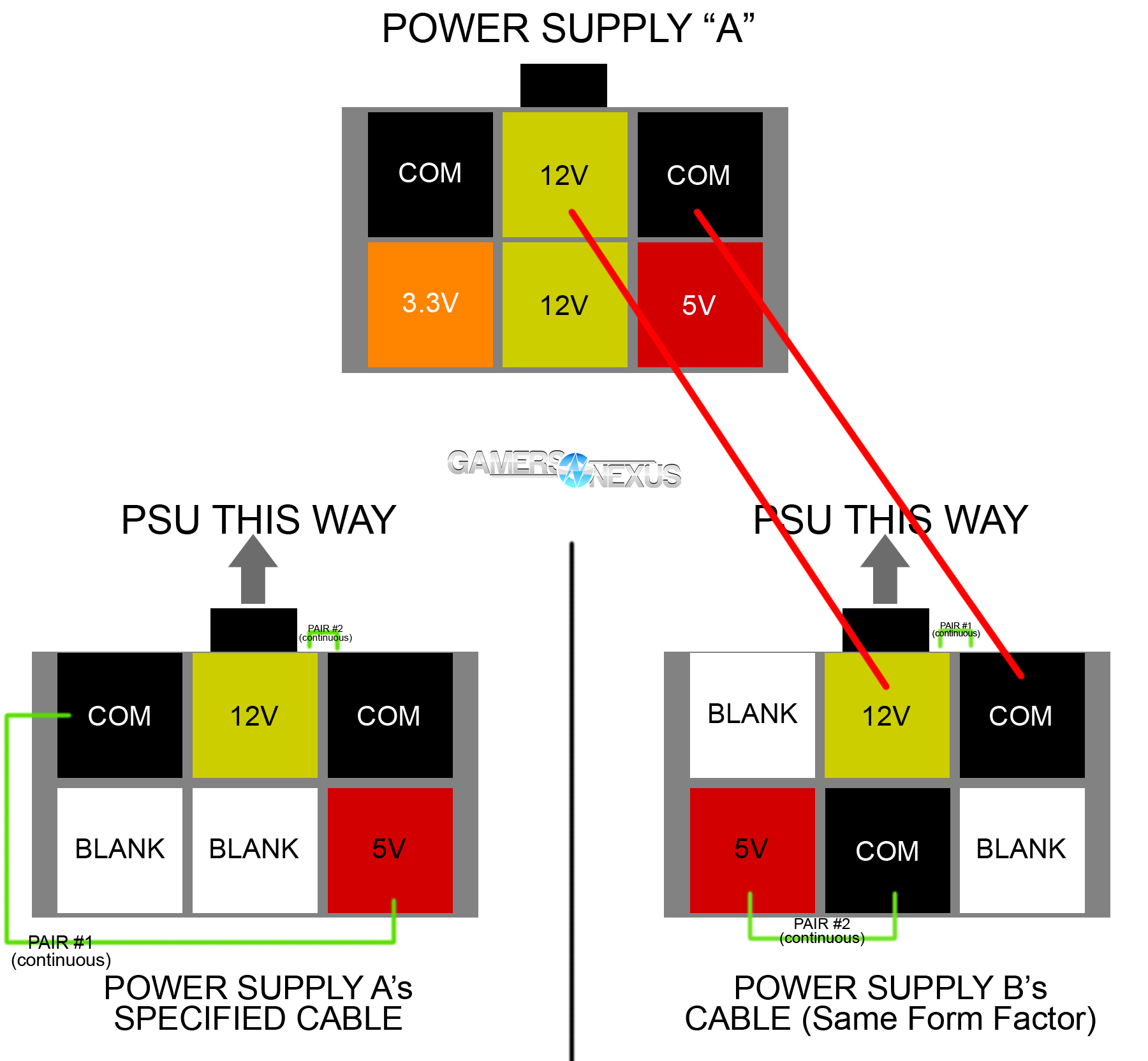 A half-decent power supply will leverage its protections to try and prevent any sort of short-circuit or over-voltage/current scenario, but those protections only work so well. If a system fails to boot, we would recommend immediately flipping the PSU's switch to off, then double-check everything in the system. It's often something forgotten -- like the EPS12V cable -- but could be a bad cable, too.

A bad power supply will fail in a spectacular manner, often with a spark and internal damage. A really bad power supply, i.e. a $15 unit that operates at half its rated wattage, could flame-out more visibly.

And just for clarity, EVGA isn't the only company that makes these cables that will physically (but not electrically) work with competition. Mixing a SilverStone PSU cable, as shown in our above video, with an EVGA PSU would also be incompatible. In some events, like our above image, you may end up fine. A 12V device like a fan would only draw on the 12V yellow+black cables, which just so happen to align with the pin-out. In others, you end up with reverse polarity, over-voltage to a device, or under-voltage.

As for why the cables from these disparate PSUs are compatible, it's because (again) the PSU-side is not a standardized set of pins. Both vendors opted to use the abundantly available 6-pin header for their cable-ends. These are made by the millions, and cost next to nothing. Other times, even between the same vendor, connectors might be swapped for something shinier (read: LEDs), bulkier, universal...er, or otherwise marketable as a selling point. That is why the connectors are not standardized: The PSU manufacturers want another way to differentiate themselves. In their minds, you're buying a device that's meant to be used with the cables it includes.

Regardless, check the video for more discussion on this, but this article has covered the basics. The point is: Don't mix and match modular cables. If you've got too many, throw them in a bag and label the bag for each PSU. If you're unsure of if a cable belongs to a PSU, set it aside until you (A) figure it out, or (B) buy a replacement that is known-good. Technically, you could also probe the cable to perform a simple continuity check, but you'd have to know the source (PSU-side) pin-out to match things up. It's not hard to figure out through deductive reasoning, as long as you've got a known-good cable, but it's also not necessarily worth it.