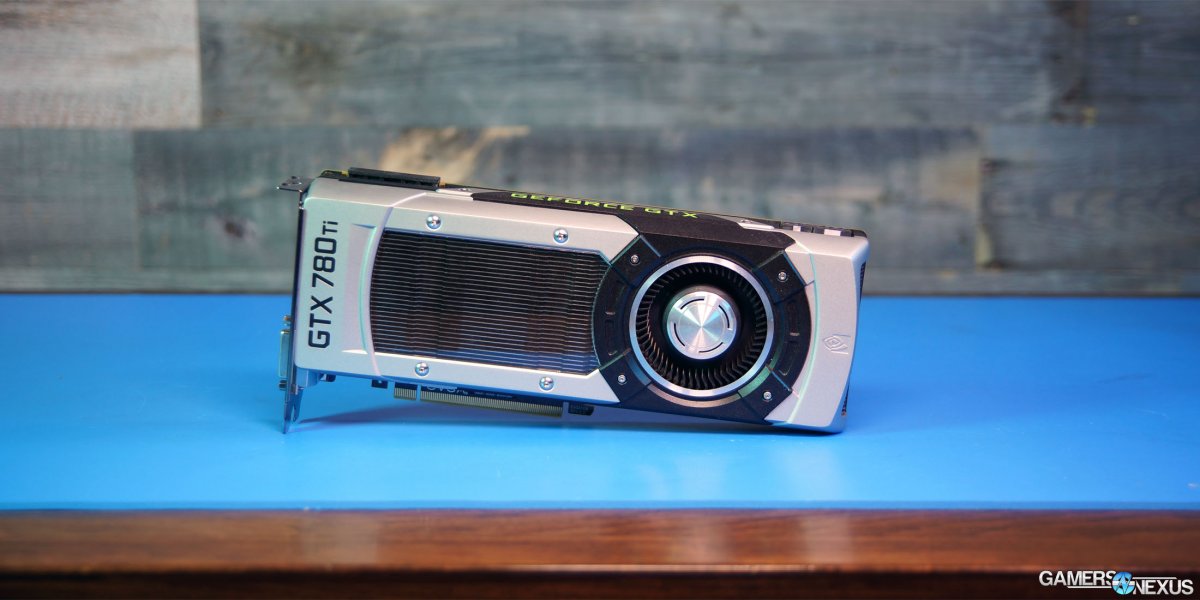 Our Battlefield 1 GPU benchmarks are defined in the initial BF1 GPU review, found over here. Note that the 780 Ti results were run before some recent major patches, and are therefore directly comparable to our previous results.

We only tested Battlefield 1 using DirectX 11, since Dx12 has generally shown poor performance in frametimes in our previous tests. We’ll look at DOOM for Vulkan performance later on.

The reference GTX 780 Ti performs at about 58FPS AVG at 1080p/Ultra in Battlefield 1, with lows reasonably close at 47.7FPS and 45.3FPS. Although nVidia has improved its frametime consistency generationally, everything since Kepler has been tightly timed.

Comparatively, this performance puts us adjacent to the GTX 960 SSC pre-overclocked card, and about tied with this generation’s GTX 1050 Ti. We’re above the RX 460 by about 15FPS, a pretty meaningful gap, and below the RX 470 by about 15FPS. 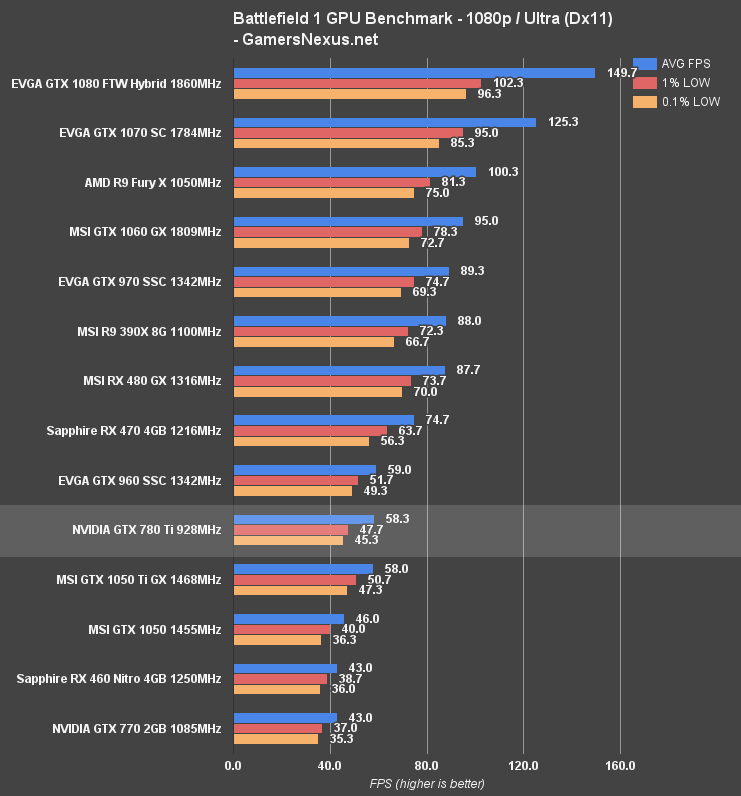 Strictly looking at same-brand generational jaunts, the $140 to $160 1050 Ti offers effectively equivalent gaming performance in Battlefield 1 to the once-king 780 Ti.

Being that the 780 Ti was a $700 card, a modern price-equivalent would be just about where the GTX 1080 is – that lands us at such a high framerate that we’d really have to look at 1440p for a better understanding of differences. 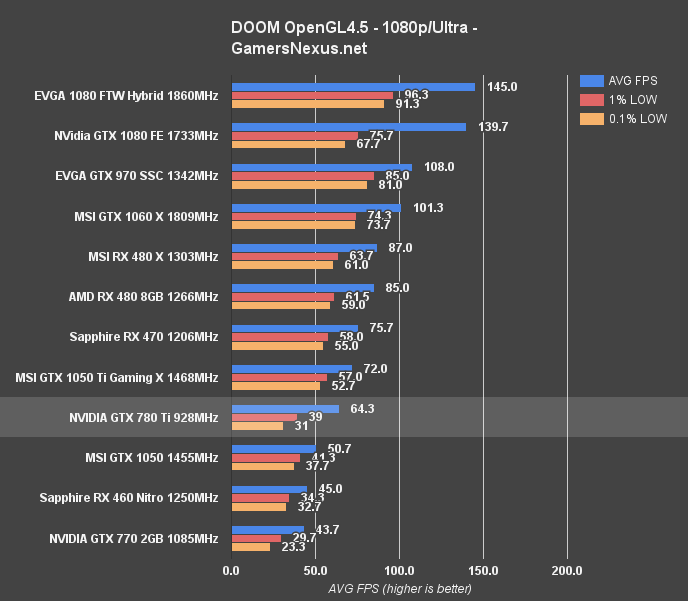 Moving on to DOOM, we’ll look at both OpenGL and Vulkan performance on the GTX 780 Ti. 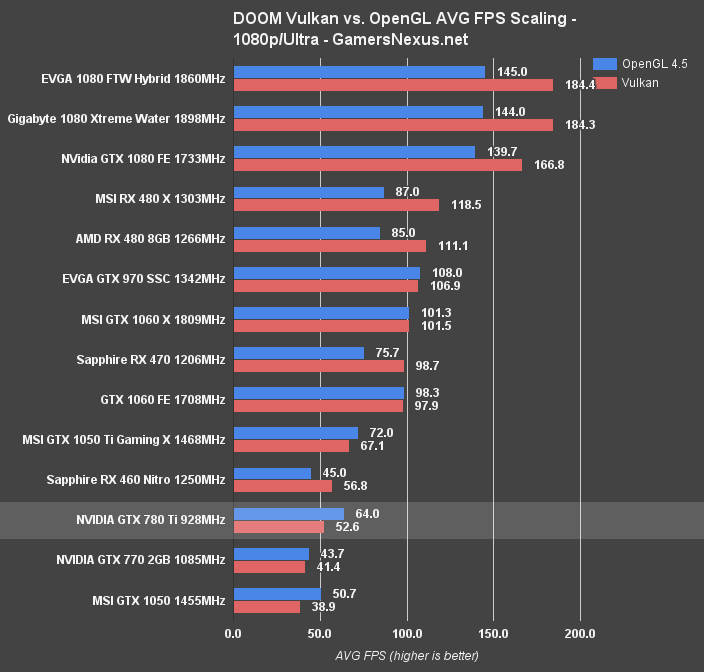 With Vulkan, our averages negatively scale on the 780 Ti. FPS goes from about 64 AVG to about 53FPS AVG. Although they’re not shown in this OpenGL and Vulkan comparison, the lows for the 780 Ti fall to 33FPS and 25.6FPS – not particularly impressive. 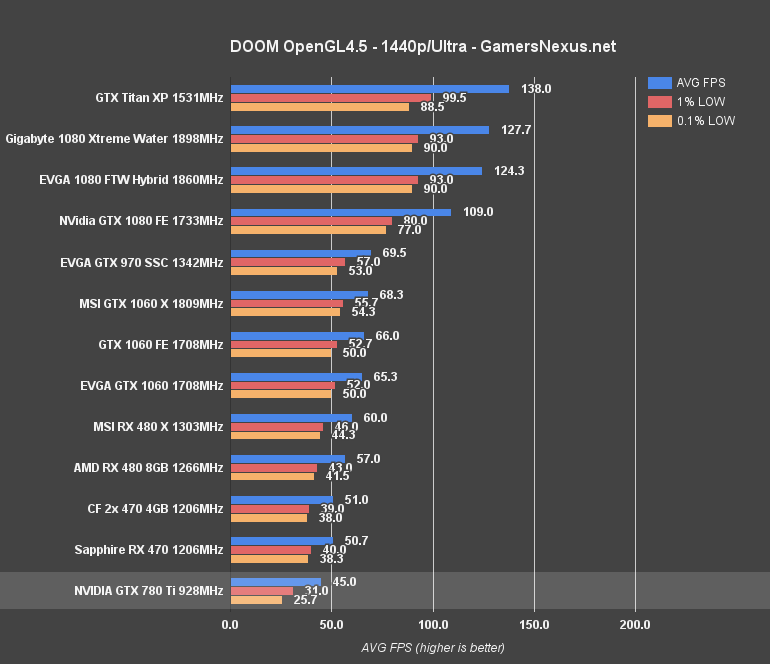 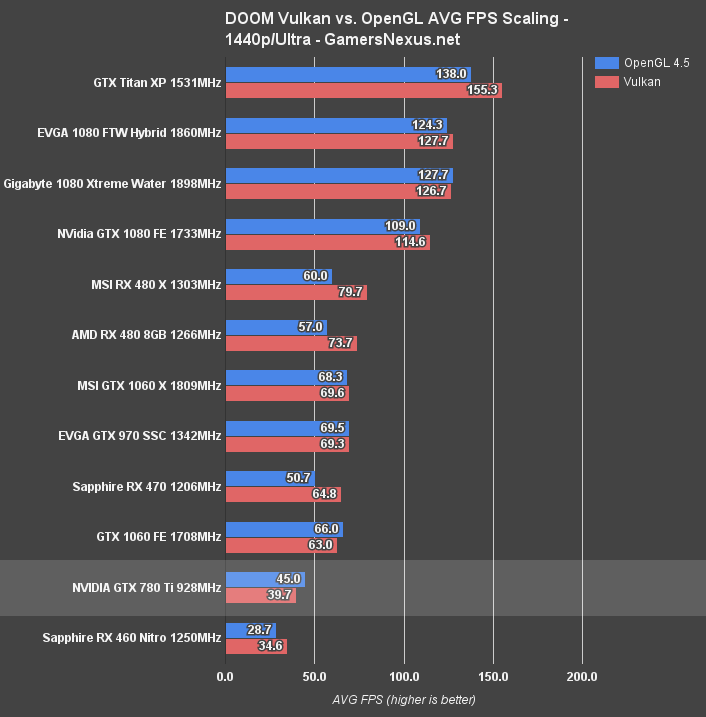 Vulkan mostly posts similar scaling to last time, with an AVG FPS of about 40, with lows at 27 and 25FPS. 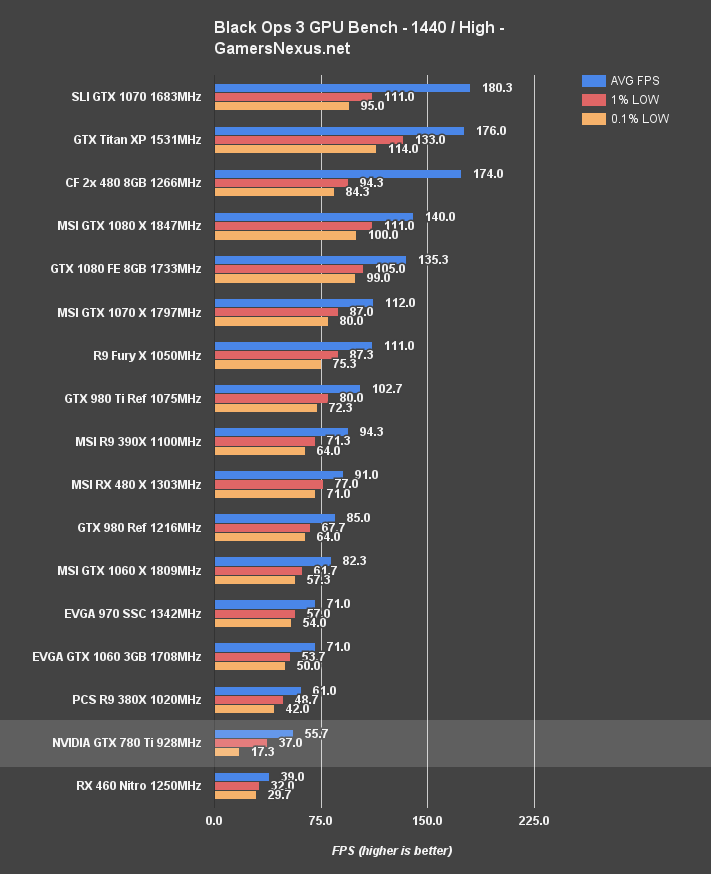 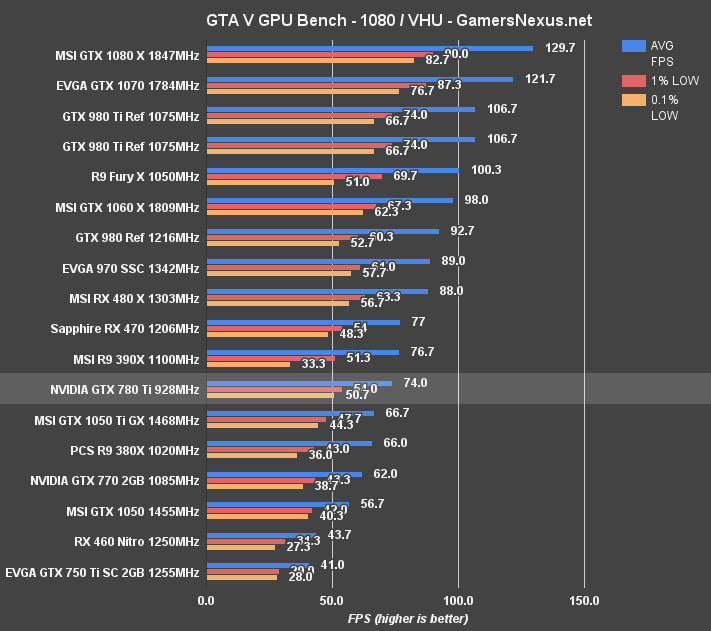 GTA V is a 2015 title that’s remained relevant through this year, and offers us a mid-step between the brand new games and the old guard, like Metro: Last Light.

The 780 Ti pushes 74FPS AVG with lows in the 50s when playing GTA V at 1080p with Very High and Ultra settings, effectively maxed-out other than the advanced graphics tab. This lands the card ahead of the 380X, 1050 Ti – which is different from our very first results, just because of how GTA V is optimized. The 780 Ti ends up a bit below the GTX 1060, again, and RX 470. It is consistent in this regard, effectively always tied or behind the GTX 1060. 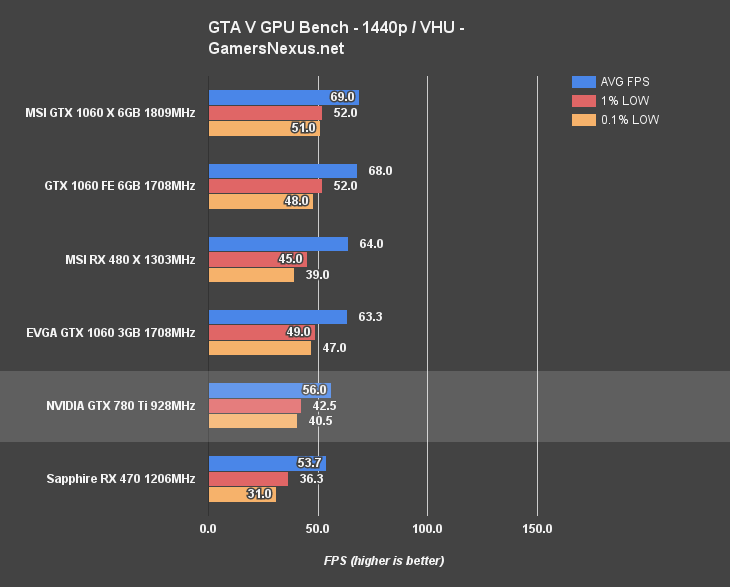 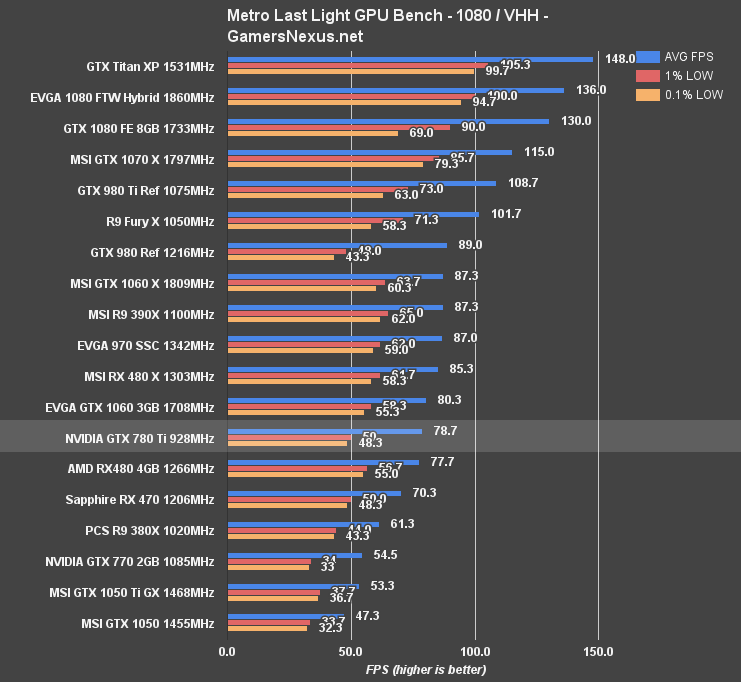 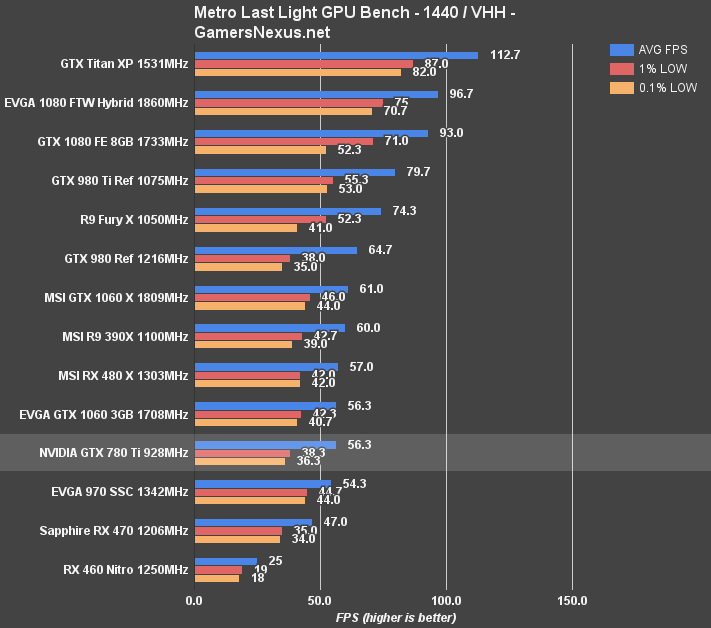 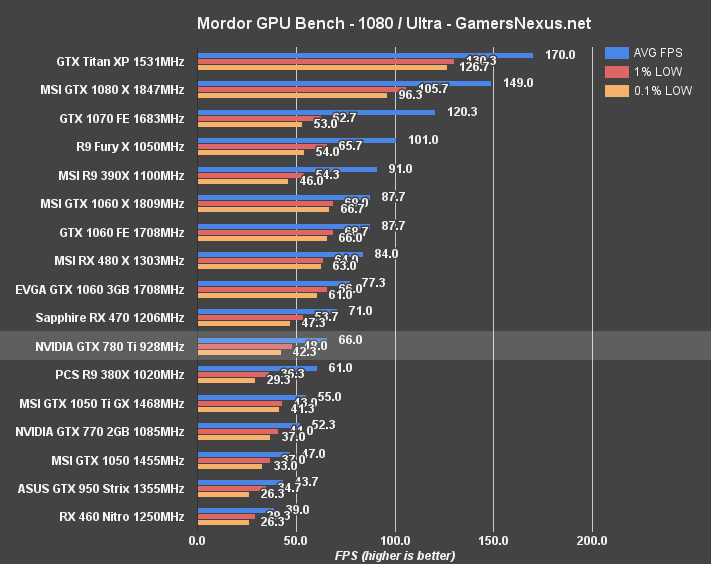 Mordor is slowly being killed off of our bench. Some of these runs are on drivers from several months ago, and the game is effectively retired from our testing, but we revived it just for the 780 Ti. It helps to look at older games for a better idea of performance scaling for the period. It’s been 3 years since the GTX 780 Ti video card came out, and it’s still got life left in it for 1080p gaming – though not much. With the modern $200-$250 cards matching and outperforming the 780 Ti in gaming tasks, it’s probably about time to start looking at upgrades for enthusiast users. If you’re still happy with the 780 Ti’s performance, stick with it; the card is still good, and production workloads would have different results than gaming workloads.

But for now, it’s clear that higher resolution gaming is significantly better supported by the modern Pascal and Polaris architectures. It doesn’t make a ton of sense to move to something like an RX 480 or GTX 1060, since those are sort of lateral “upgrades,” but a GTX 1070 or GTX 1080 would be a worthwhile gain. The new year should also yield Vega products, which will undoubtedly be targeting the high-end market and likely cause some price wars.

It’s crazy to see how fast these things age in numbers, though. Three years is a decent amount of life, and the 780 Ti could be pushed for another year or two yet while keeping high quality at 1080p, but the time is nigh for an upgrade.