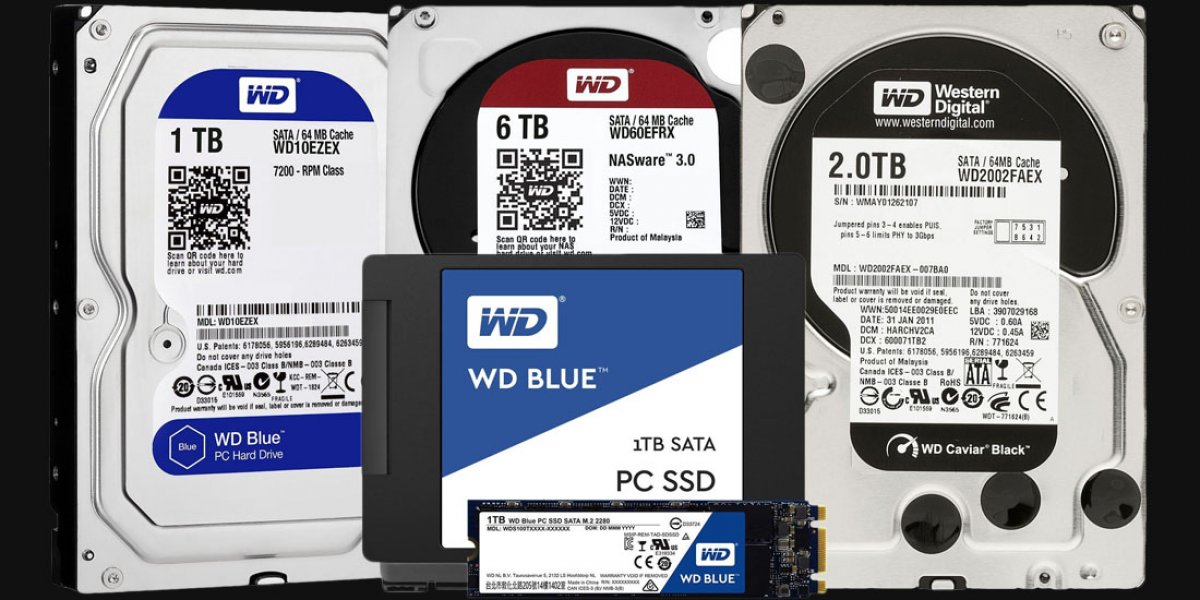 Revisiting an article from GN days of yore, GamersNexus endeavored to explain the differences between Western Digital’s WD Blue, Black, Red, and Purple hard drives. In this content, we also explain the specs and differences between WD Green vs. Blue & Black SSDs. In recent years, Western Digital’s product stack as changed considerably, as has the HDD market in general. We’ve found it fitting to resurrect this WD Blue, Black, Green, Red, and Purple drive naming scheme explanation. We’ll talk about the best drives for each purpose (e.g. WD Blue vs. Black for gaming), then dig into the new SSDs.

Other changes to the Western Digital rainbow include the expanding of WD Black, and confusingly enough, WD Green brands. Starting with the latter, Western Digital rebranded all WD Green HDDs as WD Blue, selling WD Blues under two different RPMs, but recently reentered the SSD market with both. However, the WD Green SSDs are currently unavailable, perhaps due to the global NAND shortage. Likewise, the WD Black series has spilled over into the realm of NVMe/PCIe based storage and WD Black HDDs have expanded capacities up to 6TB; that’s quite a change from the 4TB flagship model we covered back in 2014. Lastly, there is WD Purple, of which we will retroactively cover here.

Here are just a few of the HDDs we’ll be talking about today:

The HDD market has made paradigm shifts in years since our last article. SSDs have continued to displace demand for HDDs, especially so in the consumer segment. As SSDs can now affordably and competitively fill the low-end storage needs for client PCs, OEMs, laptops, etc., HDD vendors are showing increasingly less interest in this area, meaning production for 500GB products is spinning down. Platter density has advanced to the point where it just isn’t practical or cost-effective to produce low capacity SKUs. We recently published a more in-depth article regarding the HDD market, so check that out to learn more about current market trends and insights.

On the SSD side, we’ll mostly talk about:

Below, we’ll demarcate the drives from one another and discuss the differences, use case scenarios, and which is best for gaming in 2017.

WD Red vs. Blue vs. Black vs. Purple Comparison & Differences

The WD Blue line is perhaps Western Digital’s bread and butter, aimed at mixing high capacity, fast sequential write/read speeds, and affordability. These drives are primarily aimed at everyday computing and basic media consumption; they are the jumping-off point for the average customer. Disconcertingly, WD Blue offers two spindle speeds: 5400RPM and 7200RPM. This is resultant of blending in the WD Green drive line. Any model number ending with a “z” is a former WD Green offering, and runs at 5400 RPMs.

The 1TB model ($50) is still the flagship performer, running at 7200 RPM and hosting 64MB of cache. In the past, Western Digital has used Marvell controllers and Samsung chips for the cache in this model. The WD Blue drives lack advanced features like vibration protection or TLER (RAID specific) and come with the lowest warranty at 2 years.

Generally, we’ve recommended WD Blues for primary drives and gaming use as they offer a nice cost-to-performance ratio in regards to capacity and speed.

Western Digital’s designated Black series is comprised of the performance oriented consumer drives. WD Blacks are aimed at high capacity with the fastest possible throughput. Previously, a WD Blue or Green drive could prove to be a bit faster sequentially than a WD Black, primarily due to platter density. The newest 6TB WD Black aims to rectify this.

The 6TB flagship drive ($280) is made up of 5x 1.2 TB platters in addition to 10 read/write heads. This maximizes data density per platter and helps minimize the travel of the heads. The DRAM cache has also doubled from the previous 4TB predecessor, coming in at 128MB. Moreover, the Dynamic Cache Technology is intended to be more prescient with data requests and moving said data off the platters for theoretically quicker throughput. The cache is provided by NANYA, and the dual-core controller comes from LSI. Additionally, the firmware has seen tuning to improve sequential read/write performance.

WD Blacks forgo the energy and sound conscious features of the WD Blue series, but offer advanced vibration protection and the best available warranty of 5 years.

Although not for gaming, the commonness of home based cloud storage, SOHO environments, RAIDs, and server investments make the WD Red line worth mentioning. GN uses three WD Red 2TB disks ($86) for its own RAID 5 setup on its render machine, which we chose for their affordability, density, and reliability in RAID.

Distinguishing WD Reds from their desktop counterparts is that they are built to withstand the challenges of the always-on NAS environment. NAS drives are built to endure the constant vibrations and thermal envelope inherent to multi-drive systems.

Previously limited to a 6TB capacity, the WD Red line is headed by the newest 8TB model ($330). Western Digital uses their HelioSeal technology to fill and seal the drive with helium. Helium is lighter than air, and its purpose is twofold: it allows the chassis to accommodate an extra 1.2 TB platter (7 total), and it allows for less turbulence and resistance equating to less power draw and heat. Observing the above table, users can see the WD Red series sport load/unload cycle ratings twice that of the other drives, offering a glimpse into the expected service life.

The WD Red 8TB uses 14 read/write heads, an LSI-based controller in conjunction with 128MB of cache, has RAID error recovery controls, NASware 3.0, and comes with a 3-year warranty.

WD Purple is Western Digital’s surveillance class storage. These drives are suited for 24/7 usage and the firmware and caching algorithms are optimized for write intensive applications, as these drives spend most their service life writing. The 4TB WD Purple drive is $135, illustrating the price/capacity focus of the Purple drives.

Interestingly, the WD Green label has been resurrected within the SSD segment. WD Green is the least performance-oriented, offering a value-conscious baseline performance over HDDs. Capacity is limited to two options, both of which are DRAM-less configurations using 15nm TLC NAND and Silicon Motion controllers.

WD Green should occupy a similar market space of that of the Samsung 750 EVO. Presently speaking, the 240GB WD Green model is the only one available (directly from WD), the other SKUs remaining unknown until closer to launch.

The WD Blue SSDs are based on the endoskeleton of the SanDisk X400, although they use different firmware and offer different capacity options. The WD Blue series use SanDisk 15nm TLC NAND (planar), Marvell controllers, and Micron DRAM packages. WD Blues tout a better-than-average endurance rating, especially at the 1TB level ($280), besting more expensive drives like the 850 EVO 1TB (350) and 850 Pro 1TB ($450). While not exactly translating to gaming performance that is read intensive, the high endurance rating abets in sustaining a longer working life while dealing with heavy storage tasks and write intensive applications.

The warranty comes in at 3 years; perhaps a bit underwhelming. Although generally unable to saturate the limits of SATA III, WD Blues offer credible mainstream performance assuming a competitive price—something Western Digital has struggled with in the past in the SSD market.

While the former WD Green and Blue drives were based on existing SanDisk products, the WD Black is ostensibly a new product. It is Western Digital’s first PCIe based SSD, using a PCIe 3.0 x4 NVMe interface & protocol. It does presumably use SanDisk 15nm TLC NAND and a rumored Marvell controller. The drive is available for pre-order at $200 for ~500GB.

Thermal throttling can become an issue with NVMe/PCIe based storage while dealing with heavy, sustained workloads. The WD Black is shorn of any heat sinks or spreaders, but Western Digital alleges the firmware uses advance algorithms to govern power and thermals, keeping the drive within its thermal envelope. Throttling is almost never a concern for our core audience, but sustained or steady-state users should be warned.

Western Digital proffers their 5-year warranty found on the other WD Black drives to the new WD Black forerunner.

The WD Black PCIe SSD is aimed to be priced competitively amongst other M.2 PCIe SSDs and is currently available for pre-order, with orders shipping in February.

The Best WD HDDs for Gaming

We’ll cover Seagate in a near-future piece, but let’s focus on WD for now. For our gaming audience, the “best” WD hard drives would largely distill into a few segments:

For the PC builder who just games and doesn’t need much else for storage, the 7200RPM WD Blue 1TB ($50) still makes the most sense as the main archival/storage drive. The higher RPM aids in load times compared to slower 5400RPM drives, and we’d recommend going this route for storing media that’s related to your games and applications. A 5400RPM drive would be OK for larger archival storage, like photos (though you don’t want to put your professional quality DSLR shots on one) and music files. WD Black 2TB drives make sense when requiring larger capacity storage while retaining a high RPM. If you’re building a small RAID setup in your HTPC or working with a consumer-grade NAS, consider WD Reds your primary choice (WD Red 6TB for $230).

As for the SSDs, we’ll have to wait and see on the new WD Black drives that are presently available for pre-order. WD Blue SSDs will get you more reasonable 4K I/O speeds for the type of workloads our gaming audience normally experiences. WD Green runs considerably slower in the 4K random department, but would make an OK drive for a cheaper HTPC or office box.  That said, there is also a lot of competition in this part of the SSD market.