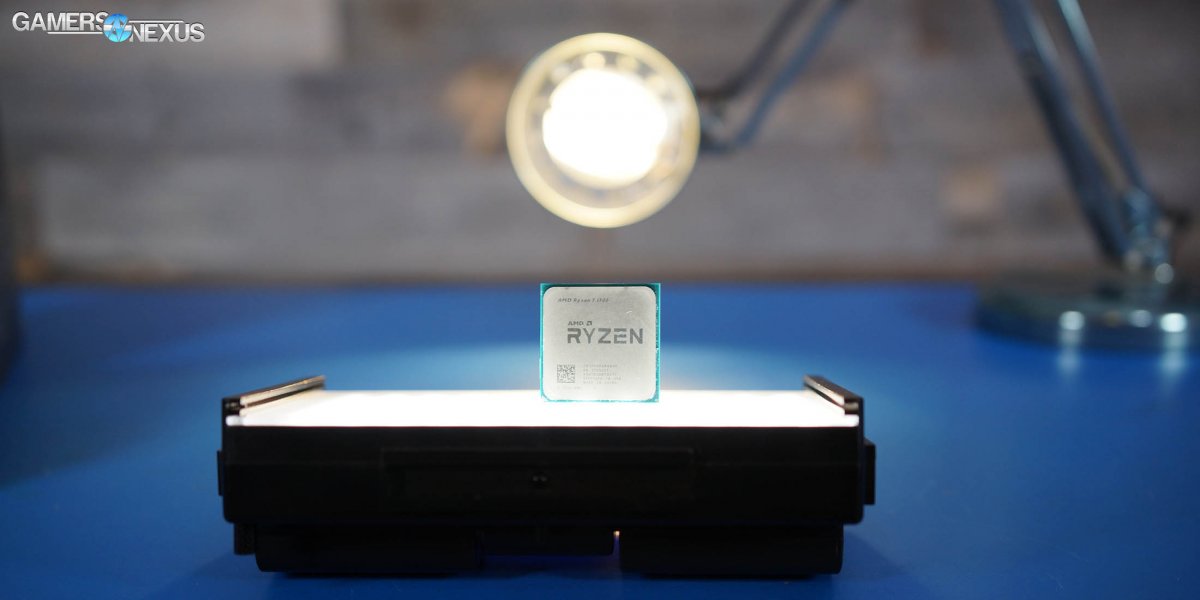 When we first began benchmarking Ryzen CPUs, we already had a suspicion that disabling simultaneous multithreading might give a performance boost in games, mirroring the effects of disabling hyperthreading (Intel’s specific twist on SMT) when it was first introduced. Although hyperthreading now has a generally positive effect in our benchmarks, there was a time when it wasn’t accounted for by developers—presumably partly related to what’s happening to AMD now.

In fact, turning SMT off offered relatively minor gaming performance increases outside of Total War: Warhammer—but any increase at all is notable when turning off a feature that’s designed to be positive. Throughout our testing, the most dramatic change in results we saw were from overclocking, specifically on the low stock frequency R7 1700 ($330). This led many readers to ask questions like “why didn’t you test with an overclock and SMT disabled at the same time?” and “how much is Intel paying you?” to which the answers are “time constraints” and “not enough, apparently,” since we’ve now performed those tests. Testing a CPU takes a lot of time. Now, with more time to work on Ryzen, we’ve finally begun revisiting some EFI, clock behavior, and SMT tests.

Before we discuss the results, it’s worth noting that turning SMT off isn’t a magical performance booster. SMT is a feature that AMD has been lacking for some time, and it’s great to see SMT finally introduced—it’s already showing its potential in synthetic benchmarks like Cinebench, and in real-world render testing. The great strength of Ryzen is in mixed workloads, and it’s completely impractical to reboot and enable SMT in BIOS to switch from gaming to production, so ideally widespread adoption of AMD’s SMT CPUs will encourage optimization or debugging where necessary. There may also be fixes that need to happen outside of software, like microcode and EFI updates. For now, though, disabling SMT is an easy way to boost FPS by a little and show more potential of the chip.

We chose our favorite of the R7 series, the 1700, for this test. The R7 1700 ($330) we were sent managed a semi-stable overclock of 4.0GHz by doing nothing more than increasing the frequency in BIOS, which had the pleasant side-effect of enabling us to run our memory at a previously unattainable 2933MHz. All tests were performed on the ASUS Crosshair with the same BIOS used in previous benchmarks (5704). We will update this EFI once we’re back from the latest show, but the changes should largely be relegated to DOCP. Because of the rapid pace of things, updating the bench for every single article is unsustainable. We will therefore launch content in blocks of same-config tests, update, and iterate. This is more time/money accessible for our outlet than an update for every single test (as updates are nonstop). Because we only care about deltas here, and because changes thus far have been minimal, we’re in good shape to test.

This is still an imperfect test, but we're doing what people asked: The exact same set of tests as previously, except with overclocking and SMT0 applied to the CPU simultaneously. As for the imperfection, it's memory speed -- we're increasing memory speed with the CPU OC (part of the initial review), and will be doing so again with the SMT0 variant. Ideally, we do these all with a fixed memory speed -- but as this was not part of the initial test plans, and as we've been dealing with nonstop requests to perform this specific test, we're adding in the user request today. This is for readers/viewers. We are also putting the 1700 in the best possible light for gaming with SMT0, an OC on the core, and 2933MHz memory (our max stable during the time of these tests).

We retested each game on our bench with the same 4.0GHz overclock and SMT disabled, as well as Cinebench (render and synthetic benchmarks generally perform better with SMT and aren’t the focus of this test). The most useful comparisons are in WD2, BF1, and TWW, since we also individually tested both SMT disabling and overclocking.

Our R7 1700 review contains the rest of the methodology, components used during testing, and benchmark information. 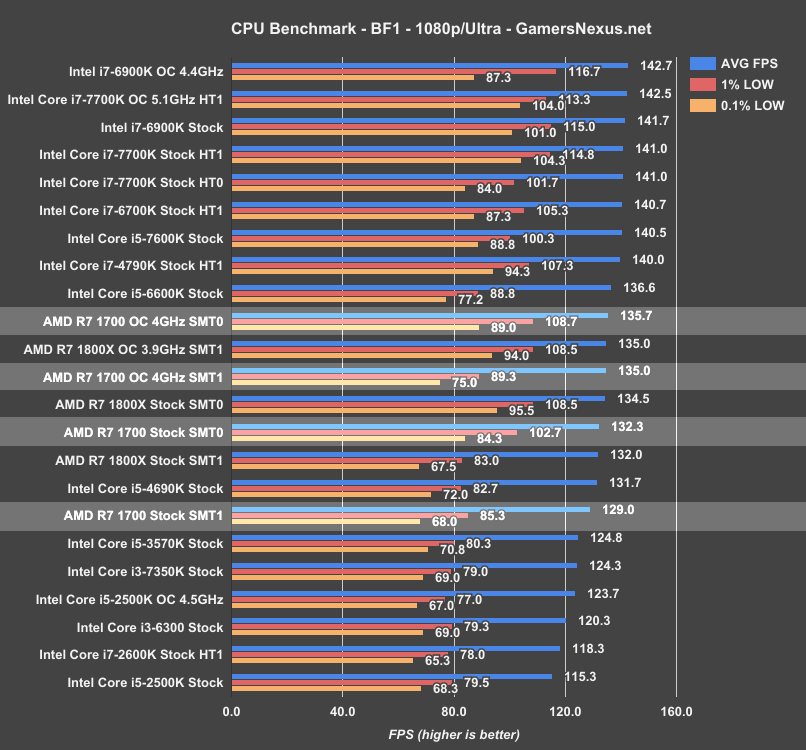 Battlefield 1 had a minor increase from 135 (OC) to 135.7 average FPS, but in this case, we have results for SMT0 with no overclock to compare against. With the stock R7 1700 at 129 FPS as a base, disabling SMT increased the average by 2.6%, overclocking by 4.7%, and doing both by 5.2%. At this point, comparing with percentages is just silly: the fact is that disabling SMT on the overclocked 1700 gained us less than 1 FPS (~0.7FPS, to be precise), which is within the margin of error for a benchmark that we perform manually. This is especially true when considering BF1’s unique behavior in data streaming, as we’ve explained in previous articles.

That said, the improvement in frametimes is noteworthy. As we've stated several times in these Ryzen product reviews or studies, the difference demonstrated between OC SMT1 and OC SMT0 is not visible insofar as user experience, but is certainly measurable and repeatable. Disabling SMT continues to prove beneficial for frametimes in this title. 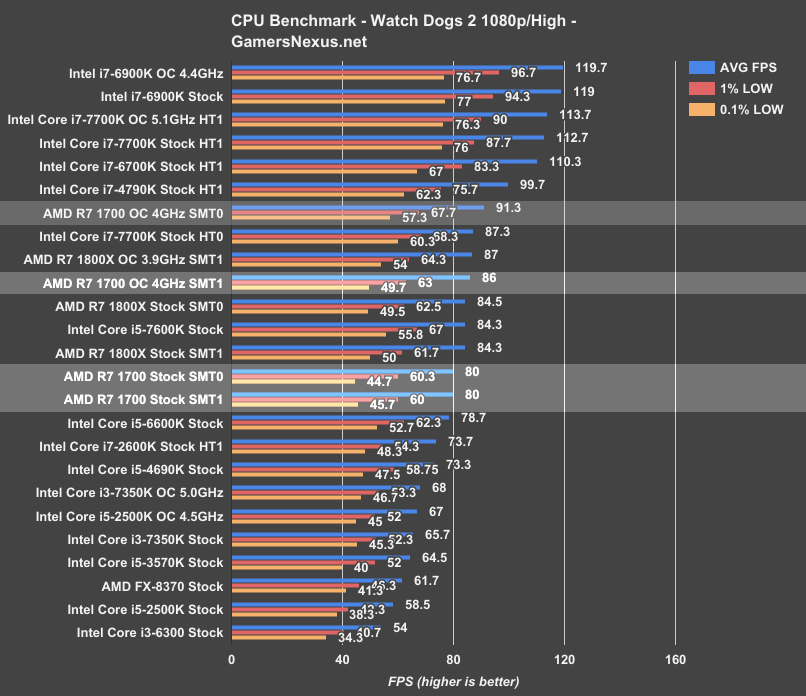 The really interesting results came from Watch_Dogs 2 and, as usual, Total War: Warhammer. Watch_Dogs 2, one of our go-tos for CPU-heavy gaming (see here), allowed the 1700 SMT0+OC to attain a (relatively) competitive 91.3 FPS average, placing it above AMD’s own 1800X and below Intel’s aging (stock) i7-4790K. This performance is mostly impressive when compared to the 1700’s own results: Watch_Dogs 2 didn’t initially perform any better with SMT disabled, but when overclocked, disabling SMT performed 6.2% better (jointly 14.2% better than stock). 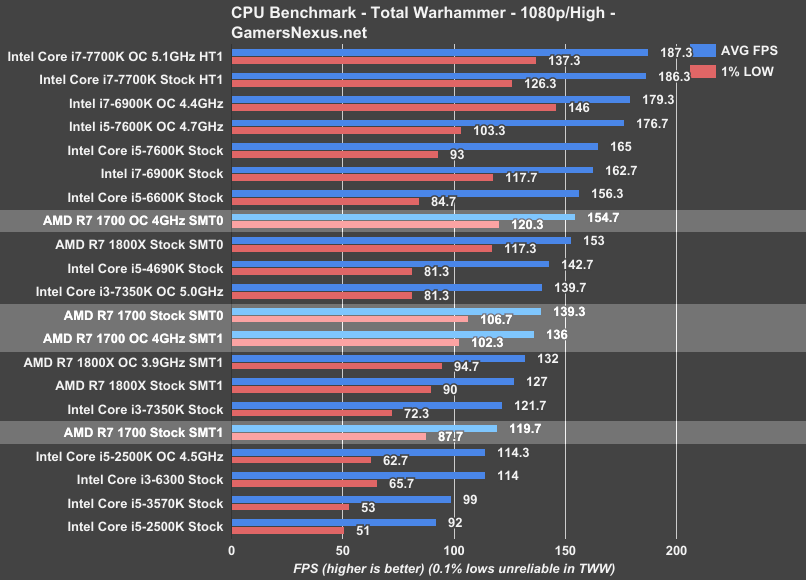 Total Warhammer is one of the games specifically cited by AMD as being in the process of optimization, and we’re eagerly awaiting any patches given these results: an 11% increase over SMT0, 13.8% over a plain overclock, and a massive 29.2% increase in average FPS over the out-of-the-box stock 1700 (with 2666MHz memory). 154.7 FPS places the 1700 just below the last-gen i5-6600K in our tests, but if these fluctuations are any indication, there’s plenty of room for easy optimization by Creative Assembly. We’ll be keeping a close eye on Total Warhammer in the near future as an indication of just how much software changes can really affect AMD hardware’s performance.

We're now entering into territory where we don't have SMT0+Stock tests, but can still compare against OC+SMT tests. Time is limited, here, and we don't have the huge team required to run infinite tests. The least impressive result on our bench was in AOTS DX12, which showed a miniscule (within the range of error) decrease in performance over a plain overclock. Ideally, we’d see a significant performance decrease by disabling SMT, but “no effect” is a good start. Note that this particular workload is intensive on the CPUs, so we’ll need to defer to titles which achieve higher framerates to better see greater fluctuation. MLL and GTA both showed minor performance increases of 1-2FPS—nothing for a real user to consider disabling SMT over. Dumping SMT continues to improve our frametimes, as shown in previous tests. Only one synthetic test was performed, as this is primarily an issue with gaming performance. Cinebench isn’t a “real” workload, but it is an AMD favorite and somewhat a simulation of rendering, taking full advantage of the new 8C/16T R7s. As such, multithreaded scores are the relevant numbers here. As we covered previously, our 1700 at 4.0GHz with SMT enabled scored a 1764, significantly higher than Intel’s stock i7-6900K (which is 3x the price, by the way), responsible for scoring 1470.5. Mileage may vary, as the 4.0GHz overclock wasn’t stable in longer render tests, and the 6900K did score 1823 when it was similarly overclocked. With SMT disabled, however, the 1700 scored 1252.5—still impressive, but as expected, much lower than when allowed to render on all possible threads.

Overall, the effects of disabling SMT are limited in comparison to a basic overclock of the R7 1700. On the 1800X, a chip that ships near its potential frequency, we saw unimpressive results both from overclocking and disabling SMT, except in TWW. Discrepancies apply when considering frametime performance, where disabling SMT improves frametimes in ways that are generally invisible to the user, but fully measurable and repeatable. On the 1700, the ideal platform for this test, disabling SMT in addition to an overclock didn’t improve average FPS performance by a meaningful amount outside of Watch_Dogs 2 and Total Warhammer, and even there, TWW is the biggest item of discussion. That’s got all manner of issues on Ryzen right now, though. Again, disabling SMT is not a practical or logical thing for a user to do—it has a place in benchmarks, both to edge results closer to what they “should” be in an ideal world, and to demonstrate that something is wrong somewhere. We recommend R7 1700 CPUs as a good price/performance option in machines that will be used both for gaming and for production, and disabling SMT gains a few FPS in games at a massive production performance cost. Doesn’t make a whole lot of sense to disable SMT, then, unless you’re willing to reboot every time the workload changes.