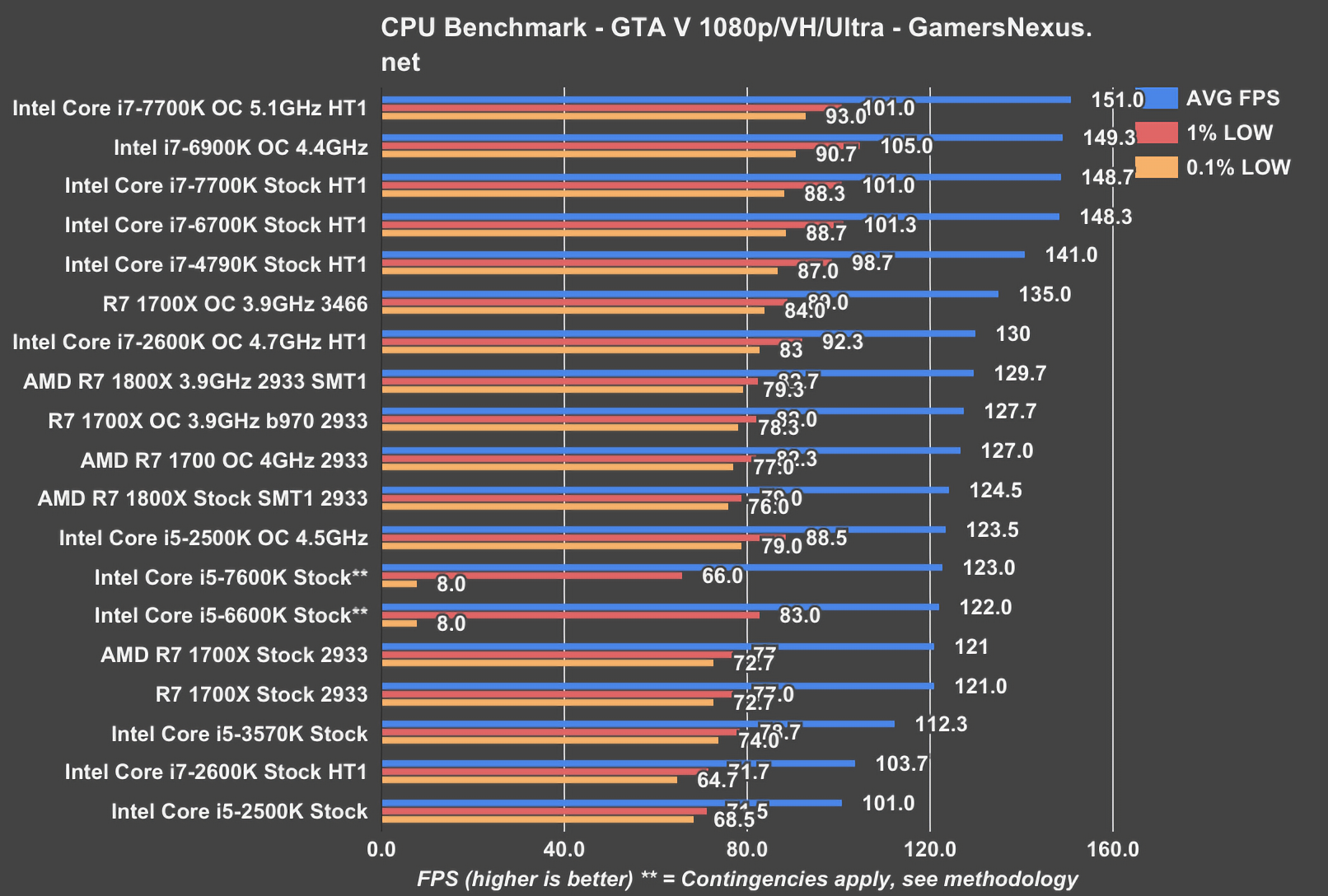 Conversely, on our Intel i7 CPUs, we have never been able to replicate this behavior until disabling hyperthreading, at which point the CPU behaves precisely the same as an i5 would. Here’s what an R7 & i7 CPU look like, though with graphics settings a bit higher:

(Note: The i7 frametime plot runs longer than the R7 due to a higher overall framerate, e.g. more frames are output by the i7, so more data is present).

Even tanking resolution to 720p, thus forcing framerate as high as it can reasonably achieve, we do not encounter stuttering on these two CPUs; in fact, the longest frametime on the 7700K and R7 CPUs never exceeded 16ms. We did not have one observable spike on the i7 or the R7 during gameplay, and not one measurable spike in the data. Frametime consistency is tight enough to provide an experience one would associate with the higher framerates.

This is not an AMD vs. Intel thing; we’re not talking comparative performance numbers between AMD and Intel CPUs right now, as we’ve already done that exhaustively in our recent reviews. The latest is the R5 1600X / 1500X coverage, if you’re curious. What this data shows is an inadequacy in GTA V as a benchmark tool, for unless the framerate is constrained to a point of guaranteeing sub-165/187FPS numbers, benchmarkers will encounter unrealistically stuttering performance affecting Intel and AMD CPUs alike. This is the point at which benchmarking deviates from the real-world: In the world of real gaming, you can – and should – solve this issue by simply running higher graphics quality, thereby lowering framerate. It doesn’t have to be 60FPS; just going down to sub-165 (at peaks) should be enough to mostly stop this stuttering issue from emerging. Forcing VSync or adaptive sync would also resolve the problem on both Intel and AMD, for the most part, though is a more extreme solution.

We won’t re-document everything that was already discussed in our first video discussing this GTA V limitation (released January 31), but can revisit some of the key points. In validating these issues, we took several CPUs and ran tests under various conditions (HT/SMT toggling included), which sometimes meant lowering settings to a point of forcing an artificially high framerate. On some CPUs, like the FX-8370, we were never able to attain a high enough FPS to encounter the issue. It’s an interesting bug, in that way: Normally, issues appear on lower performing parts, not the inverse. This time, the highest performing 4T Intel parts (and now 8T AMD parts) are affected – though 4T devices take a bigger hit (e.g. 4C/8T 1500X with SMT0 or i5 CPU natively). Increasing resolution to 4K, for instance, “fixed” the problem by forcing a GPU constraint that lowered framerate to well below the 165-187 magic mark.

Our original impetus to make the GTA i5 Mystery video stemmed from the 2500K and 3570K revisit work: We discovered that both CPUs provided a smooth experience in GTA V when stock, but pushing heavy overclocks (4.5-5.0GHz) bumped framerate into an area of stuttering. Now, normally, you’d look at that and assume the overclock is unstable – but that wasn’t the case (passed every single other test), and we later validated by toggling HT on the i7-7700K, 6900K, and running the i5-7600K tests. Further, imposing an external framerate limit (like with RTSS) allows us to get away from the 165-187 stutter trauma.

We are aware that Wendell of Level1 Techs is now experiencing similar issues, and have been in direct communication with him to collaborate on further exploration of this peculiar issue.

As of now, GamersNexus believes this to be a GTA V engine (RAGE) issue, as it is reproducible in other RAGE titles. We have been slowly phasing GTA V out of our CPU reviews for that reason, as the tests simply make R5 and i5 CPUs appear like they provide significantly worse experiences than R7 and i7 CPUs, despite being completely acceptable given a framerate limit.

Very interesting stuff. Our next CPU test arsenal will likely not include GTA V. If it does, we’ll be testing with settings that place more of a strain on the system (e.g. using Advanced Graphics) to force a framerate below the cap – but that makes us a bit uneasy, as a few peaks in FPS can really damage the frame consistency. Because this is not a common scenario for the real world, we believe removing or modifying GTA V’s presence on our bench will make for data that is not statistically misleading to a fly-by chart skimmer.

We may look more into this, but have other things to move on to for now – mostly GPU reviews, as many of you might suspect. There’s a stack of cards waiting for us. In the meantime, we thought it’d be good to share our further thoughts on the GTA V i5 (and now R5) testing mystery.