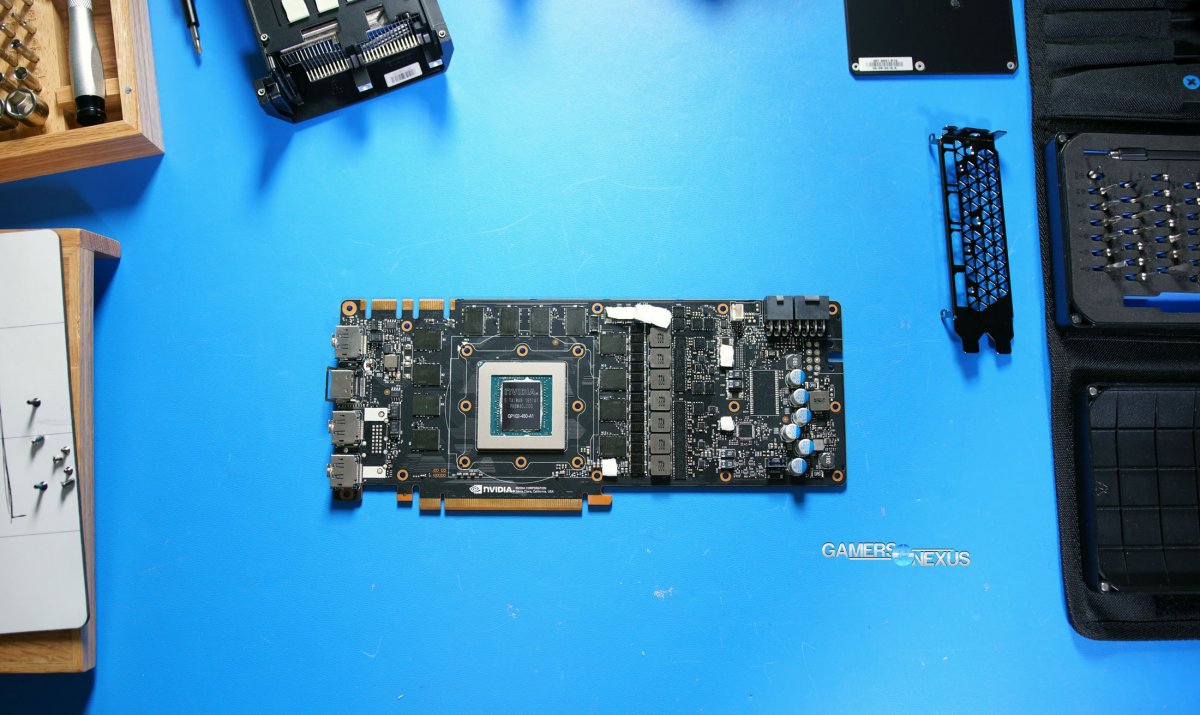 Thanks to GamersNexus reader ‘Grant,’ we were able to obtain a loaner nVidia Titan Xp (2017) card for review and thermal analysis. Grant purchased the card for machine learning and wanted to liquid cool the GPU, which happens to be something with which we’re well-versed. In the process, we’ll be reviewing the Titan Xp from a gaming standpoint, tearing it down, analyzing the PCB & VRM, and building it back into a liquid-cooled card. All the benchmarking is already done, but we’re opening our Titan Xp content string with a tear-down of the card.

Disassembling Founders Edition nVidia graphics cards tends to be a little more tool-intensive than most other GPU tear-downs. NVidia uses 2.0mm & 2.5mm Allen keys to secure the shroud to the baseplate, and then the baseplate to the PCB; additionally, a batch of ~16x 4mm hex heads socket through the PCB and into the baseplate, each of which hosts a small Phillips screw for the backplate.

The disassembly tutorial continues after this video version:

You will need the following tools to disassemble an nVidia Titan Xp video card:

We recommend an iFixit Pro Tech Toolkit ($60) for this job, potentially with a magnetic project mat ($20) to help keep track of the screws. iFixit.com is a current advertiser with GamersNexus and is offering a $5 off coupon for our readers (use code “GamersNexus” at checkout). The Pro Tech Toolkit contains every bit head that is used for the TiXp disassembly process.

(For a visual aid, please refer to above video.)

We recommend starting with the backplate of the nVidia Titan Xp card, just like we recommend for all the other Founders Edition cards. The backplate, although technically conductive, is not really built for heat dissipation. This is purely for looks (with some structural support, to be fair), and only contacts the PCB at a single point. The single point of contact is an IC, connected to the backplate via thermal pad. There are about 16 screws securing the two halves of the backplate to the card. These are tiny; remove each carefully and, when reassembling, do not tighten past the first sign of resistance. These heads snap readily.

With those Phillips screws removed, we can next pull the Hex 4.0mm head and remove the screws securing the baseplate + cooler combo to the PCB. Place these on your magnetic mat or outlined drawing to remember where they are, if this is the first time disassembling a card.

At this point, we want to separate the expansion slot plate from the rest of the device. Carefully flip the card so that it is oriented PCB-side-down on your work surface (ideally an anti-static or low insulation surface), then remove the Phillips screws in the expansion plate. This frees the plate. Set the expansion plate and backplate pieces to the side.

Gently apply upward force on the cooler part of the card so that it begins to separate from the PCB. If you’ve removed all the screws thus far (none need to be removed from the cooler itself), then this is just a matter of applying just enough force so that the thermal pads and thermal compound break hold. We like to do this with the PCB face-up, that way the pads stay on one side of the device when separated.

You have now dismantled the Titan Xp down to the PCB. At this point, you can clean the thermal compound off and continue with the next project, whatever that may be.

If you’re building a Hybrid card like we are, you’ll want to keep the base plate on there – check back for our Part 2 coverage of this project.