The first charts shows performance of the Titan Xp stock card against our Hybrid mod. Typically, we’ve seen improvement to the frequency stability (flattening of the line) by cooling the GPU with liquid, which helps with framerate consistency. In the case of this mod, there isn’t a tremendous frequency difference like we’ve seen in past mods – but there’s a big swing in thermals. We’ll talk more about that aspect in a moment.

With regard to clocks, the Hybrid mod is able to boost slightly higher in this power virus scenario, averaging about 1443MHz core, whereas the stock card ran 1392MHz. That’s an extra 50MHz without any overclocking effort, so not bad, but the Titan Xp is up against its clock limit already, so gains are minimal.

Note also that these tests are conducted with a power virus scenario, which means that the clock is enumerated differently from a gaming workload. That’s OK, because we’re just trying to stress the card thermally. 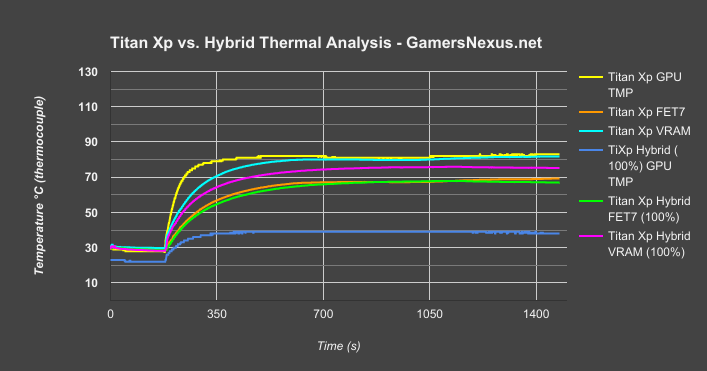 Getting into tests that involve thermocouple measurements on the VRAM and MOSFETs, we can compare the stock vs. Hybrid performance for various components. GPU diode temperatures were locked at around 84C with the stock cooler, which is the card’s thermal threshold for clock limiting. The MOSFETs were operating at around 68-70C in this scenario, well within reasonable operating range, and the VRAM was running parallel to GPU temperature at about 80-83C. This is important. By looking at how VRAM tends to follow GPU temperature, though at a slight delay (indicated at the 200-350 second mark), we learn that we need to pay attention to “thermal density” of the region around the GPU in addition to the GPU proper.

With our Hybrid mod using a 23% VRM fan and 100% radiator fan, we now see GPU diode temperatures around 40C, reducing the GPU diode reading. MOSFET and power component temperatures are almost identical, though note that the Hybrid does take longer to ramp its FET temperatures than the stock card. Ultimately, we’re not worse off for the FETs, but we can maintain equal temperatures with just 23% on the VRM fan, rather than north of 50%.

VRAM is interesting, and is the newest item we’ve added to our measurements. VRAM temperature with the Hybrid has dropped down to about 75C, whereas it was previously around 82C. Our current hypothesis is that this reduction is primarily because of the increased efficiency with which heat is removed from the GPU, reducing heat between all the VRAM modules. The VRAM is primarily cooled by the baseplate, so removing that vapor chamber didn’t hurt VRAM temperatures at all; in fact, it helped, since we can now focus all our air cooling efforts strictly on the power and VRAM components. The GPU is taken care of within a closed loop. 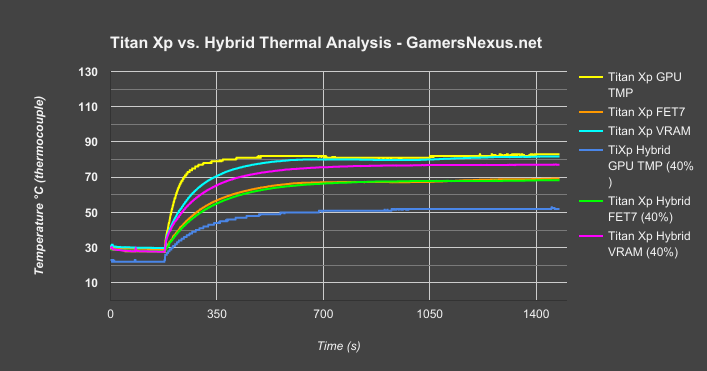 We also tested at 40% speed by plugging into the motherboard. This is where we can see that the 100% radiator fan speed exhibits diminishing returns, considering our 40% GPU diode temperature is only 12-13C higher and still around 50C max. Noise is measurably lower at this speed, as we’ll show in a bit, with temperatures still under control.

VRAM temperature is still improved with this fan speed, with FET temperatures still tied with the stock configuration. 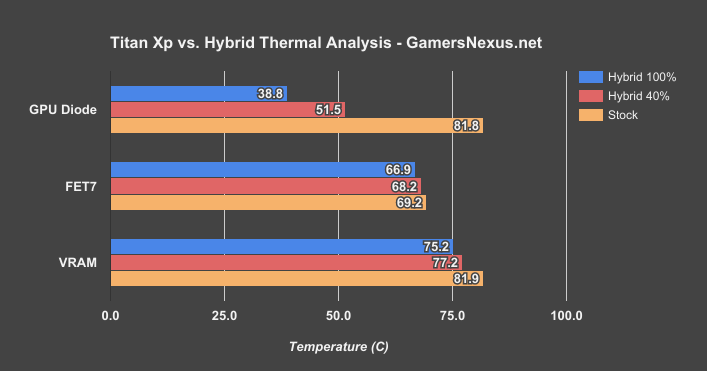 Here’s a GN EQ chart to make things easier to read. Over the same test period and averaging a few hundred cells of data, after accounting for ambient, we see the Hybrid mod benefits performance of the measured power and VRAM components alongside the expected GPU diode improvement. It almost makes more sense to run a radiator fan to the motherboard at ~40%. We’re cooling everything adequately and operating at a lower noise level than stock, with 100% speeds on the EVGA fan not really posting significant benefits over 40%.

These components are exciting to start measuring, seeing as we’ve always known that Hybrid mods benefit GPU diode temperatures, but we weren’t sure how they affected componentry. Now we know. 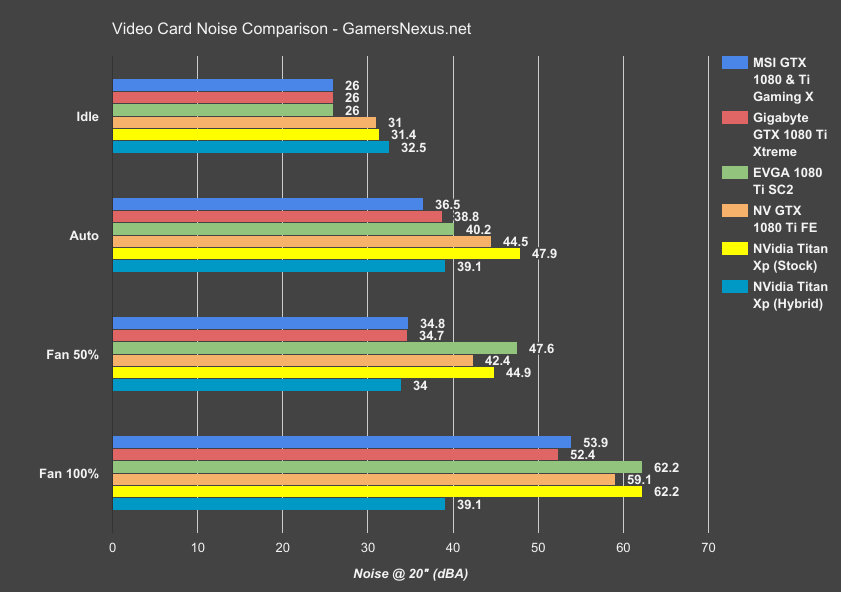 All this talk about noise, let’s take a look.

First of all, that idle temperature we’ve listed for the Hybrid mod is when running our 40% noise profile from the previous charts – this means plugging the card into the motherboard and manually tuning it. At 40% on the radiator fan and 23% on the VRM fan, our idle noise output is about 32.5dBA – higher than idle for the other devices, including the original Titan Xp, but that’s because we’ve added another case fan to the mix.

Auto, where the radiator fan is running at 100%, our output is 39.1dBA. The stock cooler operated at around 48dBA here, which is nearly two times louder by human perception, given the logarithmic scale. Here’s the thing: If you wanted to keep that 40% radiator fan speed, since we’ve shown it worked just fine in our test configuration, the difference would be even bigger. We’d be looking at 47.9dBA for auto on the stock cooler, as opposed to 32.5dBA for the 40% radiator fan – and that’s while retaining a 23% VRM fan. 33dBA to 48dBA is a huge jump in perceived noise.

Continue to Page 3 for 3DMark tests.