Watch_Dogs 2 performs badly, and it’s unpleasantly noticeable without overclocking. This is one case where the overclocked 1055T outperforms the 1090T, possibly due to the higher memory frequency, but the average is still only 47.7 FPS (26.7% greater than stock). Previously, the stock i3-6300 was our lowest performer at 54 FPS average. We’ve established in the past that WD2 is a CPU-heavy title that is affected both by threadcount and frequency, but the Phenom IIs struggle heavily, with dips down to about 30 FPS. It is technically playable, though you’d probably want to reduce settings.

The Phenom II CPUs would bottleneck most modern video cards in this game, including the GTX 1060 and RX 480 and 580 cards and up. 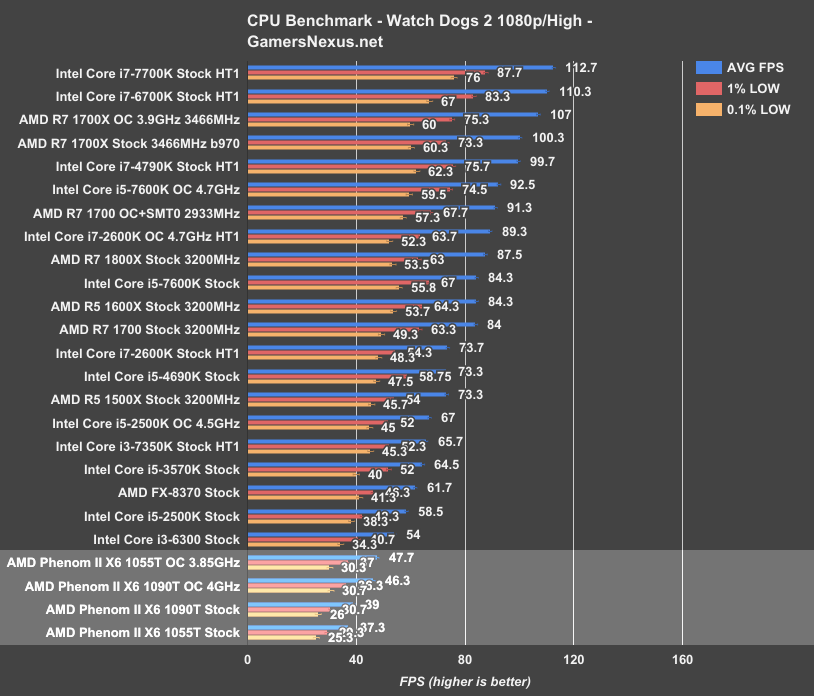 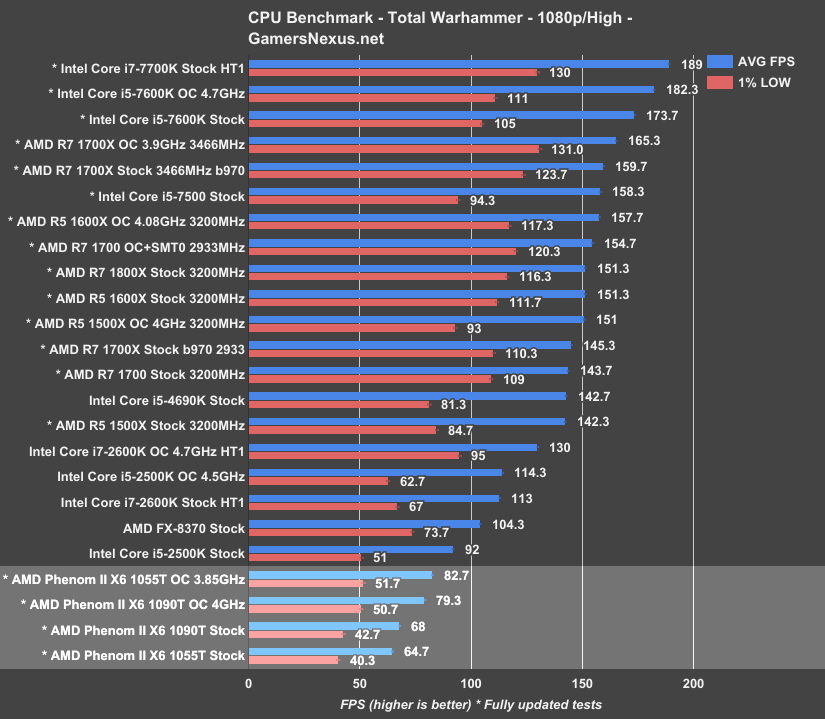 79.3 FPS for the 1090T and 82.7 FPS for the 1055T are much more acceptable averages, but they’re still firmly at the bottom of our recorded results; however, the% lows for both CPUs have held on reasonably, representing consistent frametimes. There was no obvious stuttering during the benchmark, and although relative performance may not be impressive, the job gets done.

The Phenom II X6 1055T stock CPU operates at 65FPS AVG, with the overclocked 1055T at 83FPS AVG for an uplift of 28%. That puts it behind the i5-2500K from 2011, at 92FPS AVG. Note that the 2500K has not been retested with the Total War patch that improved frametime performance for all CPUs, including Intel and AMD Ryzen processors. This means that any CPU without an asterisk next to its name would perform a few percentage points better with the patch, with big gains for low values.

The 1090T’s higher core overclock isn’t as helpful as the memory overclock on the 1055T, showing an additional choke point in the platform. The i7-2600K, before the Warhammer patch, ran its FPS at around 113 AVG. 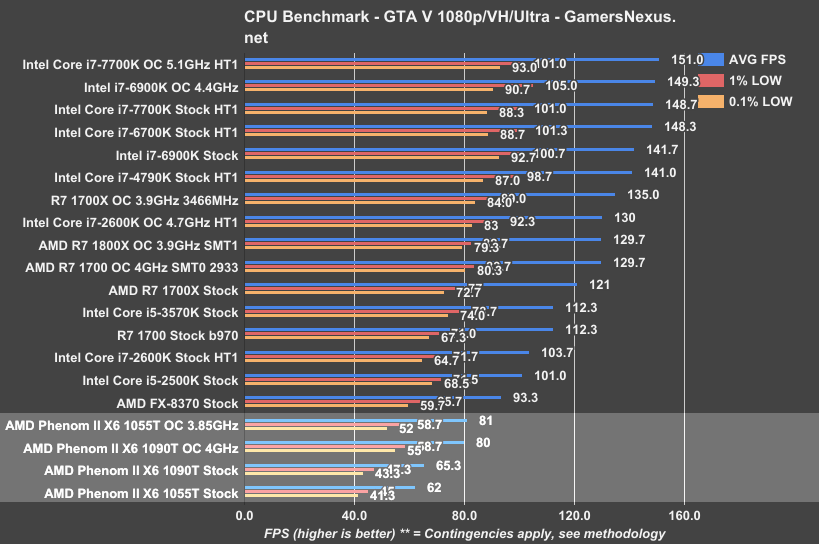 81 FPS average for the 1055T is 19.8% below the stock 2500K, which formerly had the lowest average of 101 FPS, but at least there are none of the stuttering issues we’ve discussed recently.

GTA V has had some issues with higher framerates that we’ve recently detailed and originally exposed in January, but as these Phenom devices are slow enough to dodge the higher speed issues, we can still use GTA V for this test.

Stock performance of the 1055T is around 62FPS AVG. Lows are reasonable across the board, as we don’t encounter the stutter issue at this low a framerate. The i5-2500K runs its average at 101FPS, the lowest-scoring Intel device on the bench. AMD’s FX-8370, for point of reference, runs an average of around 93FPS, making it about 15% faster than the overclocked 1055T. 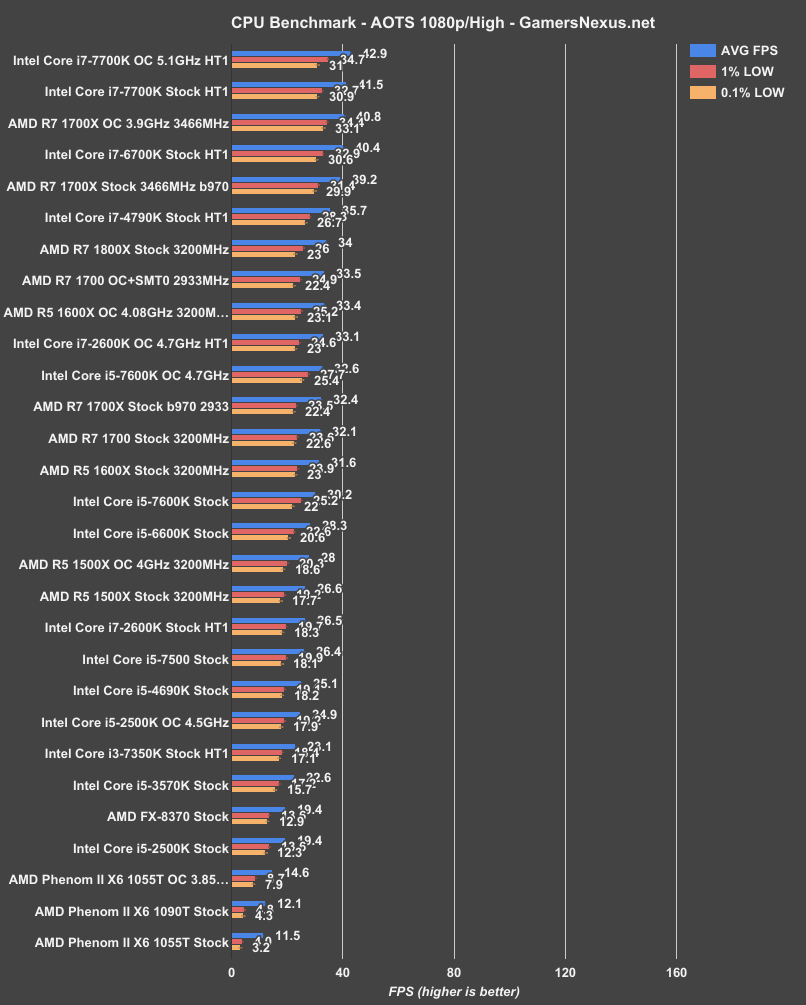 We had a lot of trouble getting AOTS to complete successfully on both Phenom CPUs, and the overclocked 1090T absolutely refused to run the benchmark without crashing the whole system. The overclocked 1055T managed a buttery smooth 14.6 FPS average, but with crushingly low 1% and 0.1% lows. 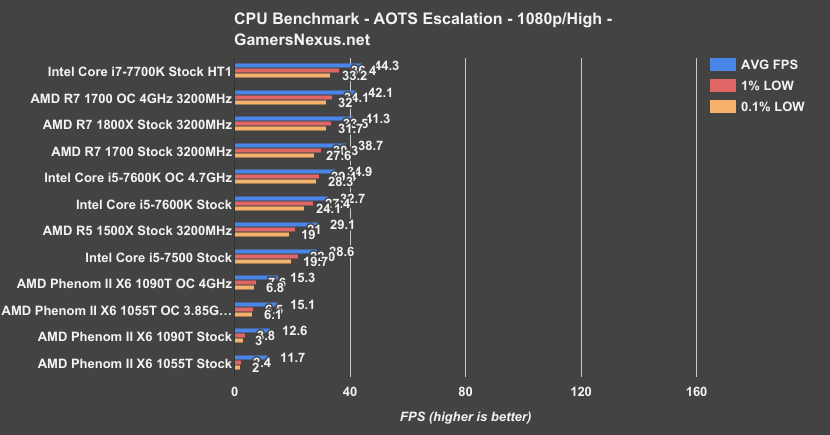 We have limited data for Escalation, but so far it’s given consistently higher average FPS than the older AOTS benchmark. The same stuttering plagued this benchmark as well, with even lower 1% and 0.1% lows. It’s hard to tell whether this is strictly due to the stress placed on the CPU or some more complex compatibility issue, but either way, watching the piping hot Phenom IIs barely lurch their way through a minute of these games was the most stressful part of this revisit. 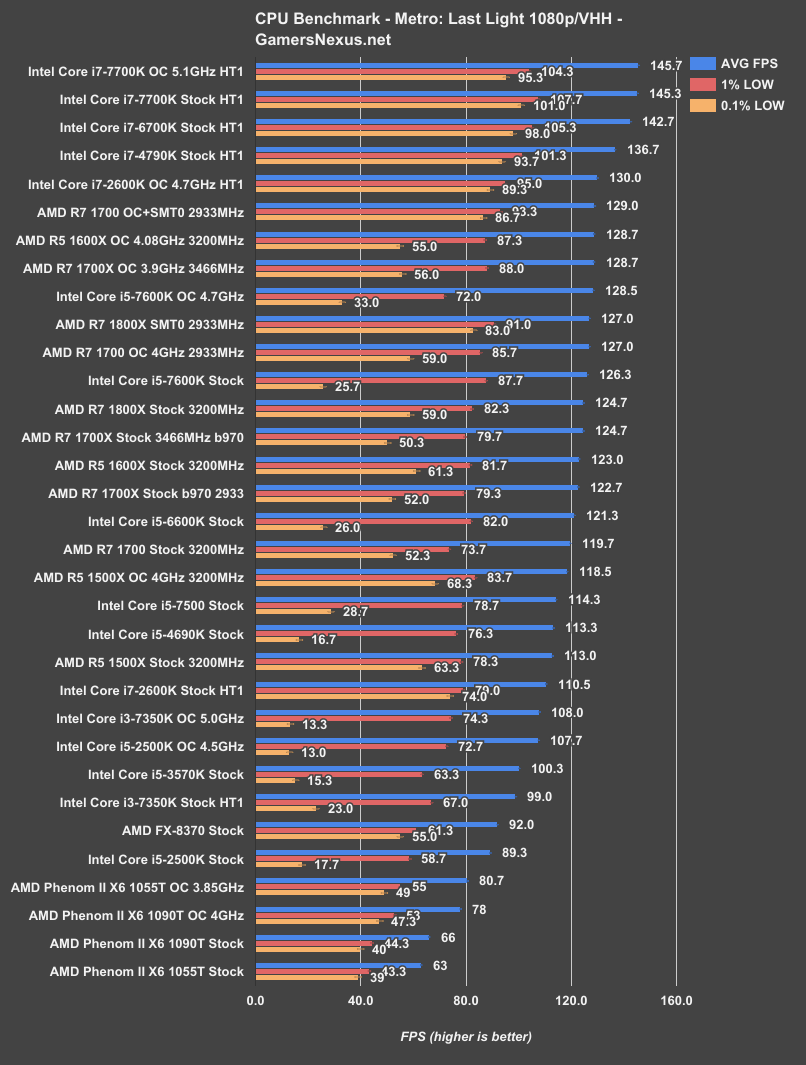 The oldest game in our lineup is a little more relevant this time than usual: MLL came out in 2013, but its predecessor Metro 2033 came out roughly a month before the 1055T and 1090T. Out of the box, both CPUs manage just over 60 FPS average, with acceptable 39 and 40 FPS 0.1% lows. Once overclocked, the 1055T reached 80.7 FPS average, with a 1% low nearly at 60 FPS. At this point, it seems redundant to say that every other CPU outperformed the Thubans: instead, focus on the amazingly consistent improvements gained by overclocking. In nearly all synthetics and games, the 1055T improved by about 27% and the 1090T by about 20%, or in this case, 25.6% and 20%. 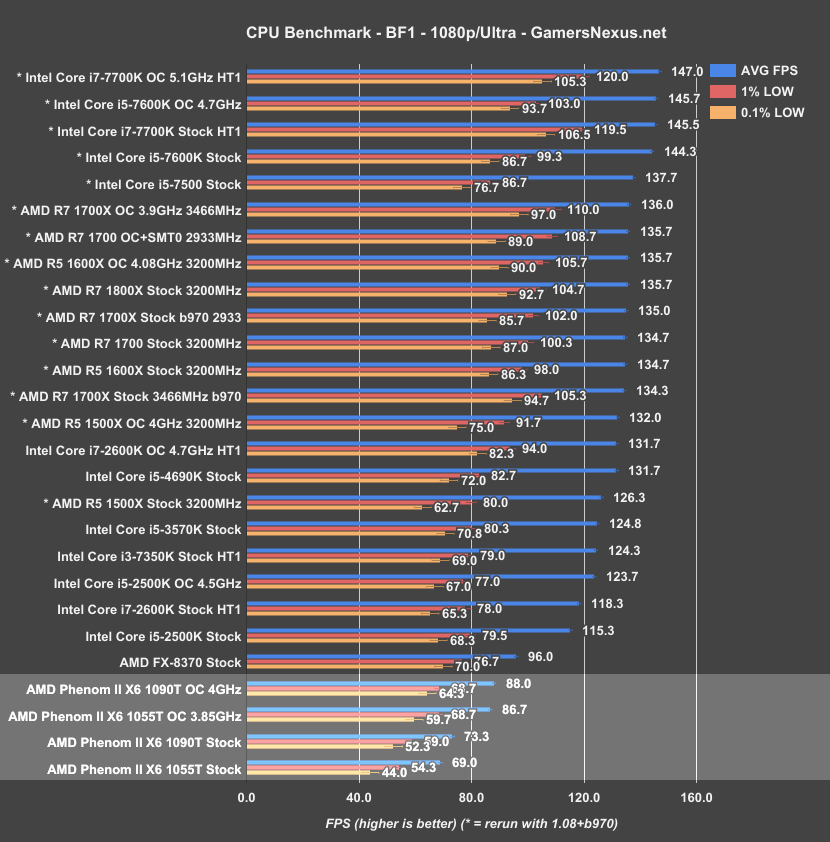 Battlefield 1 has the Phenom II X6 1055 operating at about 60FPS AVG, with 1% and 0.1% lows at 54 and 44FPS, respectively. This is one of the few results that would please 60FPS sticklers: by overclocking, even the 0.1% lows for both CPUs are at about 60: it’s relatively low, but it’s absolutely playable, and the lonely FX-8370 now has company in the “under 100FPS in Battlefield 1” club.

We ended our 2500K revisit with the conclusion that it’s a good time to upgrade, although we were still fairly impressed by its performance when overclocked. Now that moderately priced Ryzen R5s are out, though, there’s less and less justification for continuing to use aging i5s and Phenom IIs for gaming. That logic extends to the overclocked 1055T and 1090T: although average FPS in many of these tests is playable, it’s relative performance that shows the real weakness, falling below even the stock i5-2500K. Using a Phenom II X6 for gaming at this point is a stopgap measure. If nothing else, Thuban CPUs should be overclocked; we saw very consistent performance improvements across the board, and outside of strange compatibility issues with AOTS and TimeSpy, the overclocks seemed very stable.

In production, the 1055T and 1090T put up a valiant fight, but they don’t outperform any relevant (read: modern) CPU. All CPUs we’ve tested with more than four threads render faster than Phenom II, as well as many of the newer 4C/4T i5s. These CPUs were beloved for good reason: they overclock well, they have more than four threads, they were relatively affordable at launch, and they were backwards compatible with many AM2+ boards. They were never the best CPUs on the market, but they were fiercely competitive in price/performance, perhaps even after Sandy Bridge’s introduction. Sadly, they’re now obsolete.