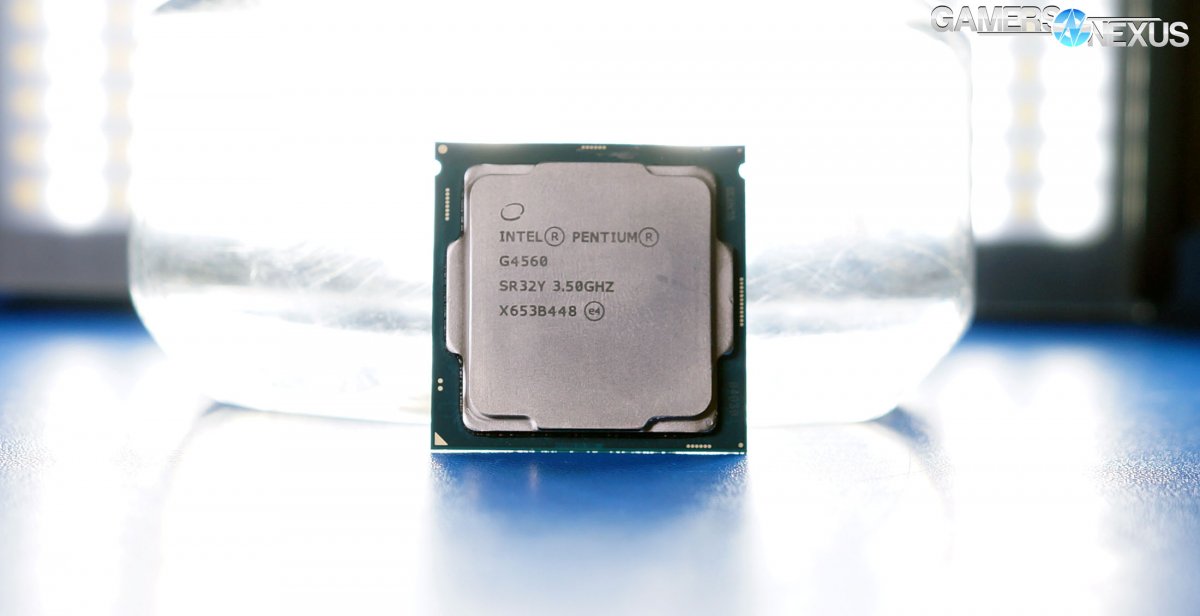 After pointing out that Intel’s budget-option Pentium G4560 CPU somewhat invalidates the Intel i3 lineup, particularly when that lineup is flanked by i5s and R5s, the next question was how good of a GPU can be paired with the G4560. Someone buying a $70 CPU won’t likely be buying a GTX 1080 – and probably not a 1070 – but we wanted to see how far up the scale we could go before encountering a CPU bottleneck. This kind of test has all manner of variables, naturally, so we’ve done our best to constraint them; the biggest is that of the games tested. Depending on graphics settings, GPU constraints could be imposed all over the place. We decided to opt for what we thought to be a somewhat realistic test: We took the G4560, paired it with GPUs ranging from ~$115 to ~$600, and then configured graphics to high/ultra with a 1080p resolution. We then included titles that are known to CPU choke, titles known to be more GPU constrained, and titles balanced in the middle. This gives a wide berth of tested content (FPS, RTS, and popular titles) from which we can draw some conclusions.

We are using the Pentium G4560 for this test, naturally. Included in our Intel Pentium G4560 GPU bottleneck test are the following GPUs (listed in order of price):

Flooding the CPU with Work

This test’s only goal is to determine a threshold beyond which the laws of diminishing returns come into play: We seek the point at which investment ceases to return linear (or somewhat linear) scaling in performance. At some point, we’d expect, a line has to be drawn where the CPU simply cannot deliver enough frames to the GPU. If it’s juggling Dx11 or unoptimized implementations of newer APIs (or plain wrappers), then it’s possible that the CPU can’t push enough draw calls to the GPU for rendering. This results in an overloaded CPU. For this reason, games which are more geometrically complex will sooner encounter a CPU constraint in the pipe.

We’re not just testing games that are geometrically complex, though – we’ve got a mix of everything. The list includes:

We already know that devices like a GTX 1050, RX 560/550, or similar cards will not produce a GPU bottleneck, and so did not test them.

Our other GPU tests are completely incomparable to these results due to a new set of numbers, completely different testing methodology, new game settings, and different test hardware (G4560). 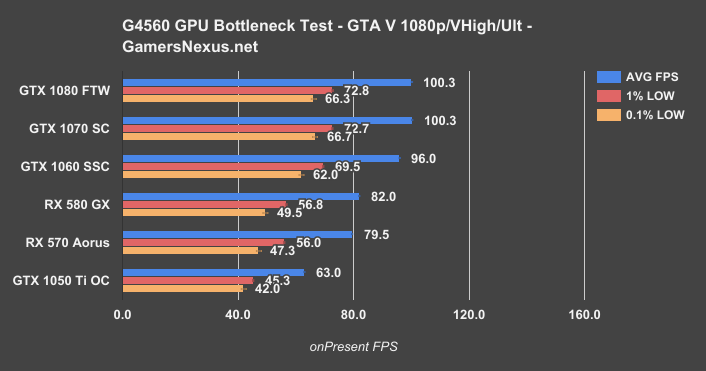 But that’s just one game. Let’s look at Total War: Warhammer next. 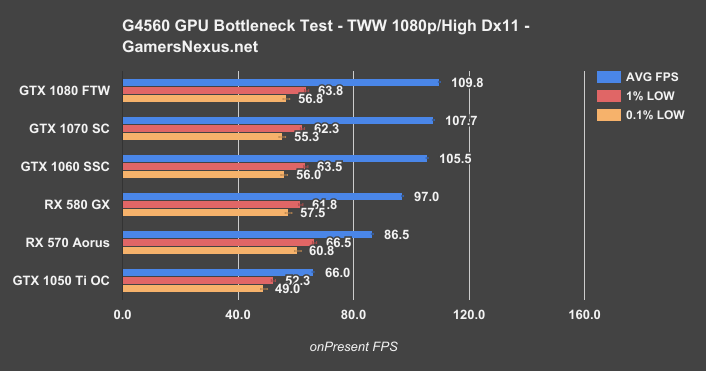 Total War: Warhammer has a similar cutoff point, where we’re still seeing some scaling with the higher-end cards, but it’s to the tune of 1-2FPS once at GTX 1060 levels. Scaling from the 1060 to the 1080 is an improvement of just 4%, which is nothing close to what we see in our GPU benchmarks when the CPU limitation is removed. The 1060, 1070, and 1080 are all functionally equal in this game when paired with a G4560. The RX 580 is not too distant from this group with its 97 FPS.

As previously, you could purchase anything from a GTX 1060 downward and end up fine. The GTX 1060 seems to be about the cutoff point. 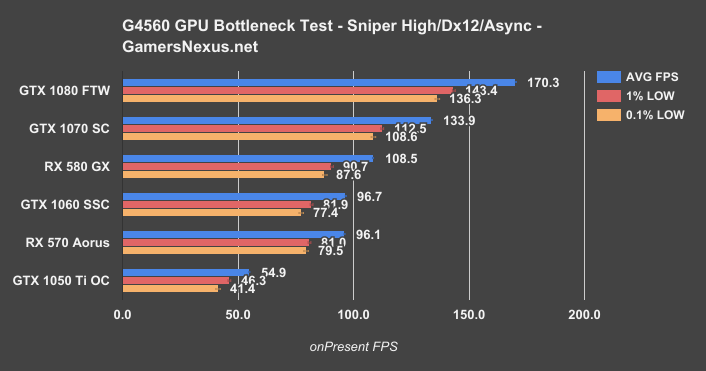 Sniper Elite is the odd man out, where the game’s DirectX 12 native integration and asynchronous compute functions permit the CPU draw call workload to largely shift to the GPU. In this instance, we see scaling all the way up to a GTX 1080, surprisingly, where we’ve got a 170FPS AVG at 1080p with high settings. That puts the 1080 27% ahead of the GTX 1070, at 134FPS AVG, which is 38.5% ahead of the GTX 1060 SSC. The RX 580 Gaming X runs a 109FPS AVG, but none of these cards are at the limit of what the CPU can handle. We’d strongly recommend not basing purchases on this game, though, as this is a rare case in the gaming world right now. Granted, not many people would consider coupling a G4560 with a GTX 1080 to begin with. 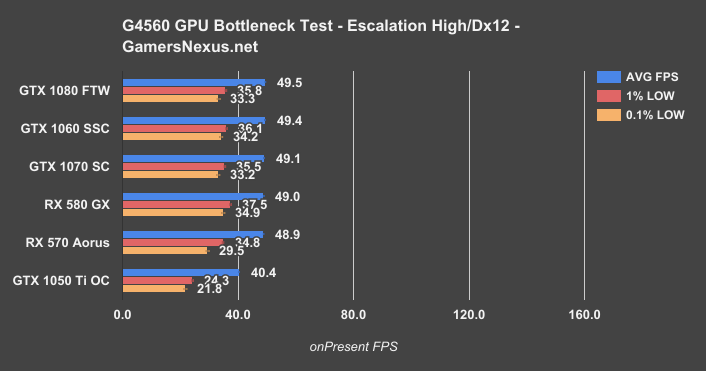 Let’s look at another DirectX 12 game next. 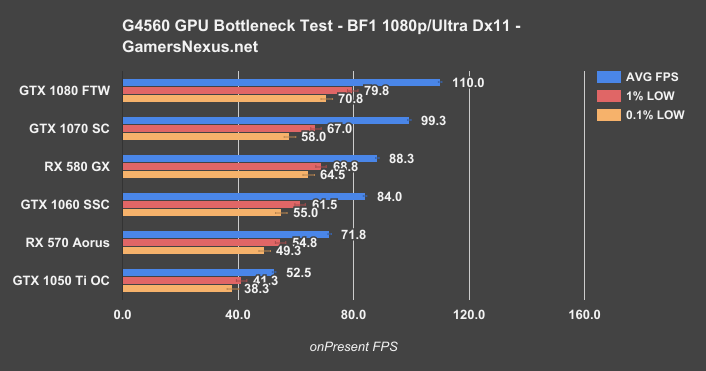 Battlefield 1 with DirectX 11 and 1080p/Ultra settings posts some scaling for the GTX 1080 from the 1070, though it is limited to 11% -- we normally see more than this when not CPU-limited. Although a 1080 posts improvement, it is well into the point of diminishing returns. 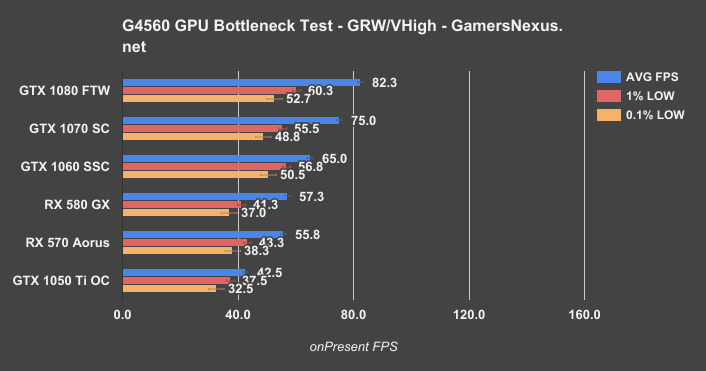 Ghost Recon: Wildlands is another title where brute force gets us some extra framerate, but we start encountering limited gains once again. The GTX 1080 runs about 9.7% faster than the GTX 1070 in this game, which in turn runs 15% faster than a GTX 1060 SSC.

We experienced a weird, reproducible issue with Ghost Recon: Wildlands with the RX 580. This isn’t something we saw when testing with the i7-7700K and only encountered with the G4560.

Here’s a look at the numbers in order of test execution. We ran two runs, each after system reboot. The first pass spikes, second pass drags, and then things begin to level out after that. With the higher end CPUs, we were seeing very steady, reliable performance. We’re not sure what’s causing this on the G4560, but we also observed interesting performance in Watch Dogs 2 with the same card. We are seeing completely repeatable (flat, unchanging) results on the nVidia devices with the G4560. We’re awaiting further thoughts from our industry contacts to hopefully better understand this.

Conclusion: When Does the Intel G4560 Bottleneck the GPU?

Fortunately, that also happens to be around where the cutoff point is in several games. GTA V, AOTS, and Total War all show almost no scaling beyond GTX 1060 class hardware. Sniper Elite 4 is a rare, weird exception – unless this is the only game you’re ever going to play, don’t base a GPU purchase on it. Although we scale up to a GTX 1080, no other game shows performance like that. It is impressive, but that’s to do with how Sniper is built more than anything else. Sniper also exhibits near 1:1 multi-GPU scaling, another thing that few games can replicate. That’s not to minimize how well-built Sniper Elite 4 is, but just to remind why we use multiple games.

This was a fun feature benchmark to conduct. We’re back to normal reviews shortly.