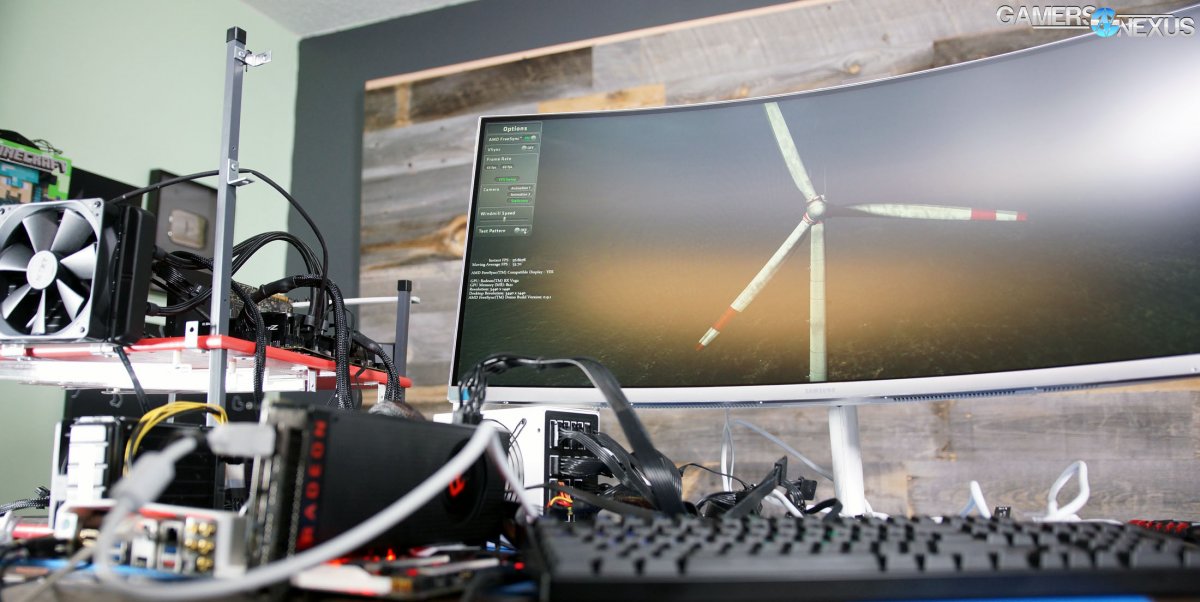 Vega’s partnership with the Samsung CF791, prior to the card even launching, was met with unrelenting criticism of the monitor’s placement in bundles. Consumer reports on the monitor mention flickering with Ultimate Engine as far back as January, now leveraged as a counter to the CF791’s inclusion in AMD’s bundle. All these consumer reports and complaints largely hinged on Polaris or Fiji products, not Vega (which didn’t exist yet), so we thought it’d be worth a revisit with the bundled card. Besides, if it’s the bundle of the CF791 with Vega that caused the resurgence in flickering concerns, it seems that we should test the CF791 with Vega. That’s the most relevant comparison.

And so we did: Using Vega 56, Vega: FE, and an RX 580 Gaming X (Polaris refresh), we tested Samsung’s CF791 34” UltraWide display, running through permutations of FreeSync. Some such permutations include “Standard Engine” (OSD), “Ultimate Engine” (OSD), and simple on/off toggles (drivers + OSD).

The short of it is this: We were unable to reproduce the flickering issues on Vega 56, to the point that we began questioning whether the test setup had been bugged or hadn’t been engaging FreeSync. The reports of flickering, after all, are abundant and often backed-up with footage of the issue. After an hour of running through various refresh ranges in games known to cause FreeSync flicker, toggling Ultimate Mode along the way, we decided to swap video cards. Going back to the RX 580, we immediately reproduced the flickering on the Samsung CF791. Speed and intensity of the flickering were particularly jarring in a range of ~48-60FPS, though persisted up through the higher end of the refresh range. Total War: Warhammer served as the most egregious version of this flickering issue, particularly on the campaign map, though AMD’s old FreeSync windmill demo also produced the issue. For anyone else trying to determine whether flickering is occurring on their device, we’d recommend Total Warhammer’s campaign map (and loading screens) as a means to easily reproduce the problem. We’ve also uploaded the old FreeSync Windmill demo, as it doesn’t require purchase to produce the issue. Ultimate Engine should be on for the worst case of this flicker. This is a worst-case scenario, though other games also exhibit flickering.

Disabling FreeSync completely provided an instant ‘fix’ for the flicker problem on the Polaris GPU, so at this point, we’d confirmed consumer reports and successfully reproduced the behavior. The Polaris flicker testing we performed with the latest drivers (as of August 18, 2017) and the first-available RX 580 driver.

Now confident that we knew how to replicate the problem, we moved back to Vega 56 in attempt to detect flickering on AMD’s partnered card. We first tested with the oldest press branch, later tested with the public launch drivers, and ultimately were unable to produce flickering on the V56. The flickering is absent at all tested refresh ranges (48-100Hz) and is absent in both the press branch (b6a) and public branch drivers. We were unable to reproduce the flickering in the FreeSync demo, Total War, GTA V, Ashes of the Singularity, and a couple of other games. We were able to produce other issues related to the Samsung display, like sharp gamma/brightness changes under perfectly wrong conditions (high contrasting images simultaneously on screen), but not the FreeSync flicker issue. Ultimately, that’s what we’re here to look for – it’s the worst of all the complaints about the CF791.

Technically, we were able to “see” flickering on the UX180 camera across various shutter speeds, and only when Ultimate Engine was enabled. That’s a camera, though – it’s not a human eye. There are other variables at play and, ultimately, it’s an irrelevant complaint if the human eye can’t detect flickering. A camera “detecting” flickering with Ultimate Engine is likely some misalignment of the shutter and the display. Using a phone camera, we could not “see” the flickering with Ultimate Engine + Vega 56. And again, three sets of human eyes could not detect a flickering issue on our V56. This does make it difficult to show the V56 working in footage, though, since the camera sees a sort of flicker when recording the display. For this reason, we used RGB + gamma scopes in the video, which should help visualize the two different types of flicker. The camera’s observed “flicker” on the CF791 is more of a wave, and different from the full-screen flicker that legitimately occurs on the Polaris card.

Vega 56 clears. We’d assume that Vega 64 also clears, but haven’t tested it. If you’ve got V64 and this monitor, please consider running through the test and posting a comment below. Let us know if you see flickering – we’d bet not, but there’s always room for a different result. FreeSync flicker doesn't look to be present in Vega 56 with the CF791.

Vega: Frontier Edition is a bit of a unique card in the Vega stack. It launched earlier, has known features disabled vs. RX, and has an older driver branch that uses some Fiji or Polaris code. Testing VFE, we were able to reproduce some of the flickering issue. It wasn’t as obscene as Polaris, but wasn’t resolved as on V56. The flickering on VFE was frequent enough to be annoying, and would warrant disabling Ultimate Engine or FreeSync. Flickering is oddly less frequent with VFE, tested across all the same FPS ranges and with the same software, but is still frequent, observable, and obnoxious.

This leads us to two possible conclusions, and we’re not sure which is most likely: A chip-level defect on Polaris may be the case, or a driver-level change that has affected V56/64, but not VFE/older cards.

The chip-level change seems less likely, seeing as Vega: Frontier Edition also exhibits flickering of some kind. That said, VFE shipped as a product with features disabled and incomplete drivers, so that card sits in both camps of problems. We think this may be a driver-level update that helped Vega. If that’s the case, we’d like to see AMD update Polaris soon, too, seeing as Polaris/Fiji owners are presently left with a flickering mess of a FreeSync implementation. Vega appears fine and, ultimately, that’s what matters most when criticizing the bundle packs. If Vega is the card bundled with the CF791, and it is, then Vega needs to be clear of the issue – and it is.

That said, it’d be nice if Polaris got some of what Vega did, we’re just not presently sure if it’s possible through drivers or would require a hardware-level change.

We’re not here to review this monitor, and today’s content piece is not a review. It’s just a feature test of FreeSync. Knowing now that the flickering appears to be gone on Vega, we’d recommend looking up full reviews for additional details. Keep in mind that we’re working off a single sample; if you’ve got the monitor, do us a favor and let us know if flickering is present using the various FreeSync implementations.