Testing was fairly straight-forward in this one – we’re not reviewing the cooler today, just looking at coldplate A/B performance.

As above, we fixed the CPU multiplier and voltage to eliminate fluctuations and native boosting behavior during testing. Although the fluctuations and boosting are beneficial to performance, they are unpredictable and invalidate thermal testing. We also used the same 140mm fan (NH-U14S TR4) on each of the coolers; although each unit does include its own fan, there is variance in manufacturing with fan PWM-to-RPM response.

We used three primary tools for CPU load, ultimately eliminating one of them:

We take measurements at steady state under each workload. Ambient is measured second-to-second during each test, aligned with thermal data from the cooler passes, and then used to offset the output as necessary. 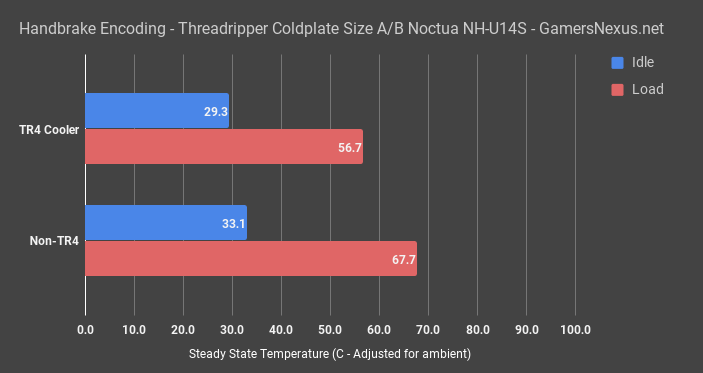 With Handbrake transcoding one of our videos for 30 minutes, the CPU reaches steady state and produces a temperature delta of 11C between the two. The TR4 coldplate is heavily advantaged in this particular test, keeping to around 57C, versus the nearly throttling LGA115X cooler. Threadripper throttles at 68C Tdie, or 95C TCTL. The idle delta is 3.8C, favoring the TR4 coldplate. 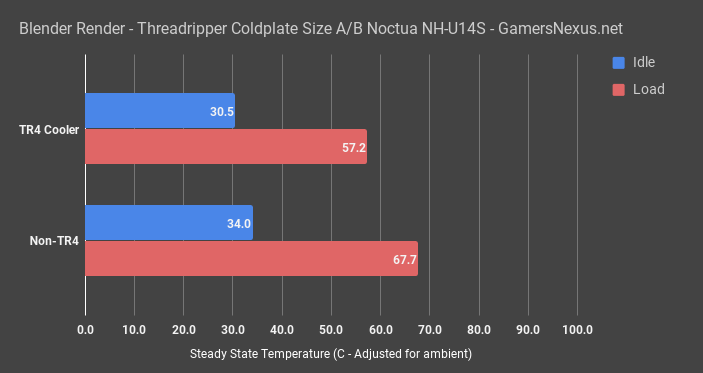 Moving on to Blender, our load delta is about 10.5C, once again producing a favorable result for the TR4 cooler. There might be a bigger temperature difference than we can see here, as we’re starting to clock throttle on the LGA115X unit.

Liquid will be different, but interesting, because channel design could impact efficiency of the solution. That said, once you’re under liquid, it doesn’t really matter all that much how efficient it is – TR just doesn’t easily get hot enough under existing Asetek CLCs.

Speaking with Noctua about the results after testing concluded, the company reported also seeing about a 10C difference. We’re seeing about what Noctua indicated.

This testing clearly shows that Noctua’s move to update an existing cooler to TR4 IHS sizes, even if the rest of the unit remained unchanged. Noctua likely didn’t have enough lead time to design a completely new cooler, so picked the middle-ground by modifying the coldplate and keeping the rest. The cooler could likely be improved by extending the heatpipes outward to fully contact the perimeter of the coldplate, but in its present state, the heatpipes still contact most (if not all) of the die area.

But again, this isn’t a full review. Interesting results, nonetheless.