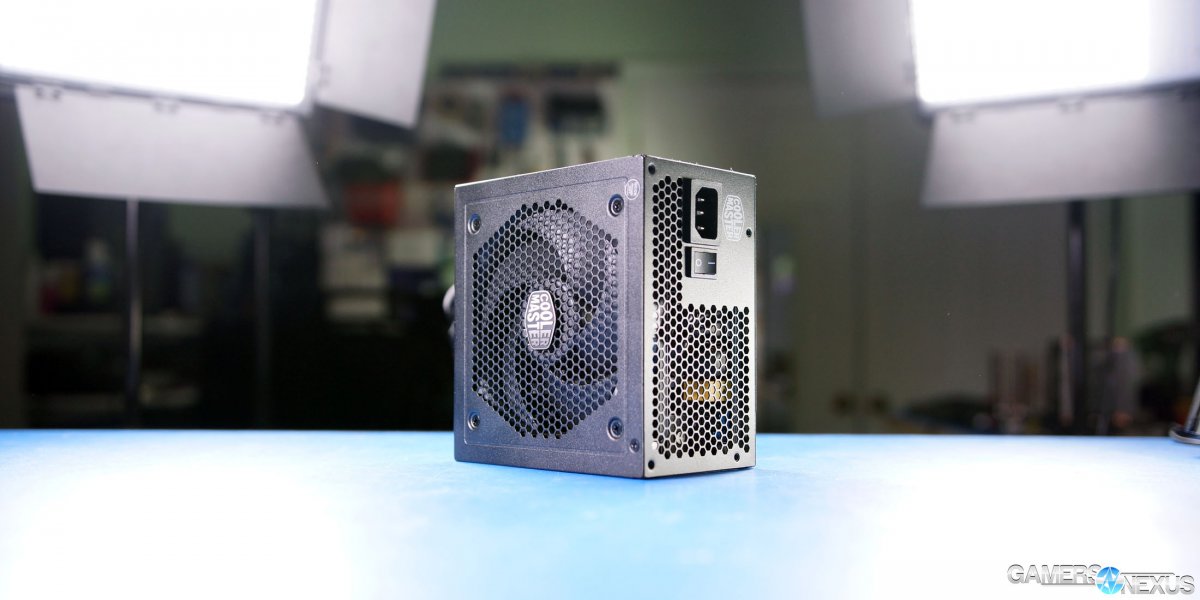 We’re revisiting an old topic. A few years ago, we posted an article entitled “How Many Watts Does a Gaming PC Really Need,” which focused on testing multiple configurations for power consumption. We started working on this revisit last week, using a soon-to-be-released Bronze 450W PSU as a baseline, seeing as we’ve recently advocated for more 400-450W PSUs in PC builds. We'll be able to share more about this PSU (and its creator and name) soon. This content piece shows how far we can get on lower wattage PSUs with modern hardware.

Although we’ll be showing an overclocked 7700K + GTX 1080 FTW as the high-end configuration, we’d recommend going higher than 450W for that particular setup. It is possible to run on 450W, but we begin pushing the continuous load on the PSU to a point of driving up noise levels (from the PSU fan) and abusing the power supply. There’s also insufficient headroom for 100% GPU / 100% CPU workloads, but that should be uncommon for most of our audience. Most the forum builds we see host PSUs ranging from 700-800W+, which is often overkill for most modern gaming PCs. You’d want the higher capacity for something like Threadripper, for instance, or X299, but those are HEDT platforms. For gaming platforms, power requirements largely stop around 600W, sans serious overclocking, and most systems can get by lower than that. 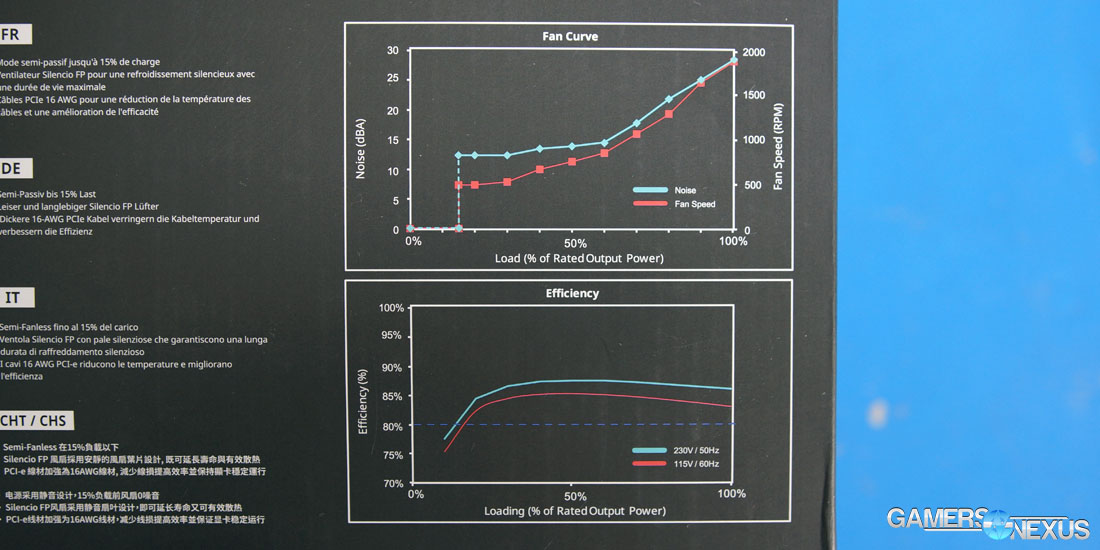 The above curves are part of the PSU's marketing materials. For our purposes today, these are sufficient to demonstrate efficiency curve and fan RPM-to-load response. We generally want to stay in the 45-60% load range to maintain peak efficiency and lower noise levels, though it’s not a hard requirement. Sticking closer to this range will ensure the PSU operates to its best abilities, but as gamers tend to not continuously load their PSUs 24/7, it’s OK to run a heavier load. This content piece is largely meant to help realize the actual wall power consumption of various system configurations. The builds are not meant to be “the best” you could get at the money, just representative of power consumption for other mid-range systems.

A lot of the reason you’d want a higher-end PSU would be for more stable voltage ripple, better protections from direct shorts, overcurrent, overvoltage, and the like. Reducing voltage ripple closer to 10mv (e.g. from the high-end of the ATX spec, like 90-100mv) means better clock stability, but there’s no rule that says higher or lower wattage PSUs will have higher or lower voltage ripple. That comes down to a component-level test. High-end PSUs don’t have to be high-wattage, of course, and opting for lower capacity can sometimes aid in the price department – particularly when the higher wattage isn’t needed to begin with.

Note: These are not meant to be definitive power benchmarks of any one component. View our component reviews for that. We're just looking at the ballpark power consumption of systems similar to the ones listed. Because these measurements are taken at the wall, we are reporting higher power consumption than what is actually utilized PSU-side (due to inefficiency).

Idle power consumption is expectedly low across the board and doesn't come close to reaching 100W. We'll move along quickly. 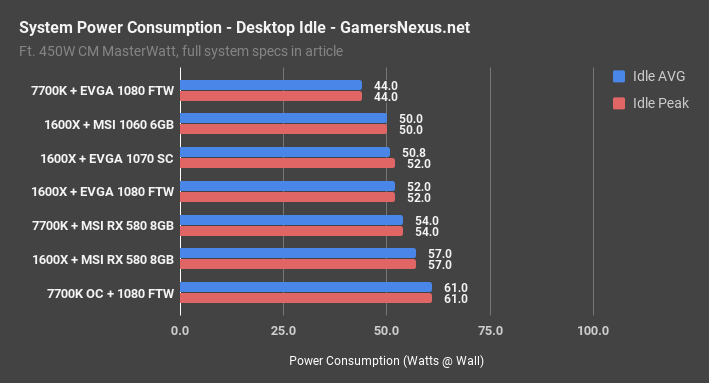 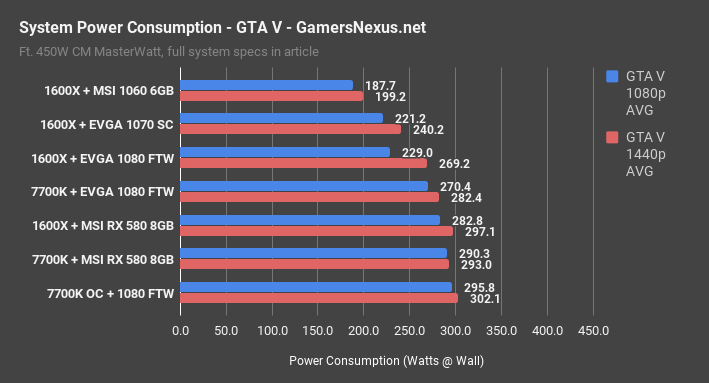 We tested games in 1080p and 1440p, and are only showing average draw for these applications. The MSI GTX 1060 used is the lowest power consumer of these GPUs, and so its build with the 1600X rests at just under 200W on average. EVGA’s 1070 SC and 1600X combo come next, running a power consumption of 220-240W, with peak consumption at 246W. This puts us around or a little over 50% of the PSU’s total continuous capabilities, meaning we’re roughly at the peak of the efficiency curve at 230V for the Bronze 450W unit. For US outlets at 115V, peak efficiency is closer to the 45% area.

Pushing beyond that 50% marker, the 1080 FTW + 1600X configuration consumes 230-270W and the 1080 + 7700K stock configuration draws 270-282W. The latter positions us at around 63% utilization, before accounting for efficiency loss, which is still plenty acceptable. Switching to an RX 580 moves us up to between 280 and 300W for both configurations, around where the 4.9GHz overclocked 7700K and 1080 land. At 300W draw, we’re using 67% of the PSU’s available continuous supply. At 230V, we’re still plenty efficient at this point – just above 85% -- with 115V efficiency dropping to around 85% or just below. At this point, efficiency is less of a concern than noise might be. Most power supplies will begin ramping fan curve at this mark, so noise levels rise. That increase may not be noticeable over the rest of the system’s noise under similar load, granted, but it’s something worth pointing out. 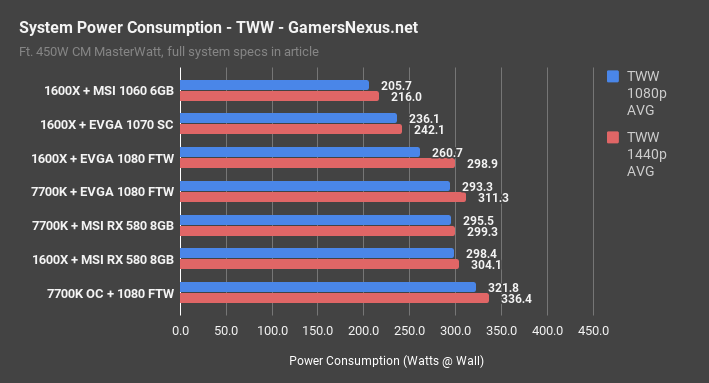 Total War: Warhammer provides another look, with performance ranging from 206W consumption to 336W average power consumption at the wall. At 336W, we’re breaching 74% utilization, not accounting for efficiency loss. If that’s not a concern, the PSU can still handle it – especially considering that most gamers aren’t putting their systems under constant, high utilization scenarios. If this is sustained for gaming, it’s still “fine,” it’s just not ideal. We’re also losing headroom here for the spikier load levels, which peaked at 354W for the 1080 and 7700K OC system, and losing room for additional components or GPU overclocking. Realistically, you really shouldn’t pair a 450W PSU with a GTX 1080 and overclocked 7700K – besides, having that kind of budget means that a higher-end PSU should be within reason to purchase. That doesn’t mean you couldn’t do it, of course. 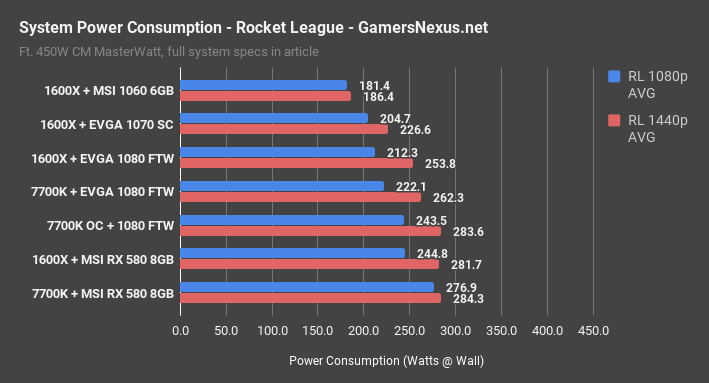 Here’s Rocket League, where we see lower power consumption due to the lighter-weight workload. At the very high-end, we’re drawing 284W, give or take, keeping us reasonably close to peak efficiency on the curve and lower noise levels. 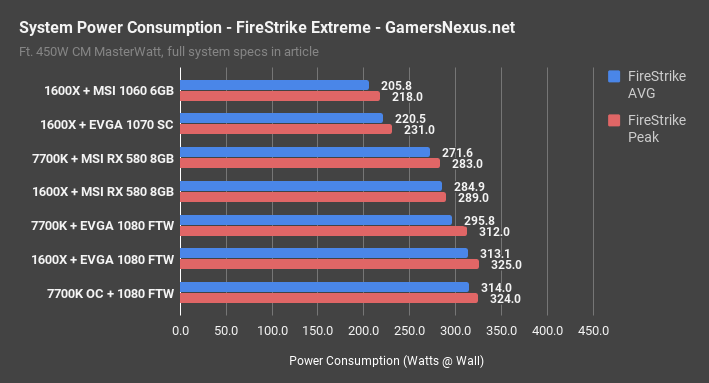 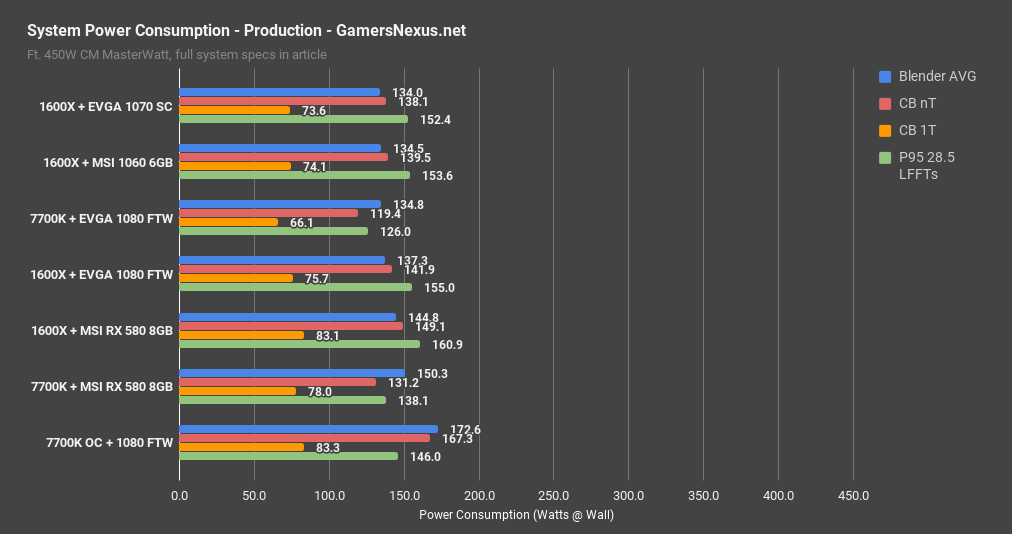 Looking at production and synthetic workloads that are more CPU-driven, We’re clearly well below even the 50% mark, as the GPU remains unutilized and other resources don’t engage as heavily. We’re well under 200W in these tests.

We wouldn’t recommend a 450W PSU for the 7700K + GTX 1080 combo, but it works for most the other configurations on the bench. Running the higher-end combinations at 100% GPU / 100% CPU would strain the PSU in more significant ways, and would be better suited in the ~45-60% range on the utilization curve. Not many gamers actually do that, though. Gaming workloads don’t exhibit the same level of stress and load as FurMark + Prime95 running simultaneously would. For something like an R5 and GTX 1060 or RX 570, 450W is plenty for these gaming configurations. You can get far on a 450W supply, assuming it’s decent.

Clearly, for an HEDT or high-end system, opting for a more appropriate PSU would be better; X299 and Threadripper drink enough power down the 12V lines to require the higher wattage units. For today’s focus, though, on just mid-range and high-end gaming systems, there’s plenty of room in the R5/i5 class with GTX 1060/RX 580 class hardware for 450W PSUs. Bumping into overclocking territory and using higher end GPUs would be better served by the 600W area.

We’ll do more with this topic later on, but for now, we’ve got a starting point for how far 450W can go.