The Best CPUs of 2017 for Gaming, Blender, Premiere, & Overclocking 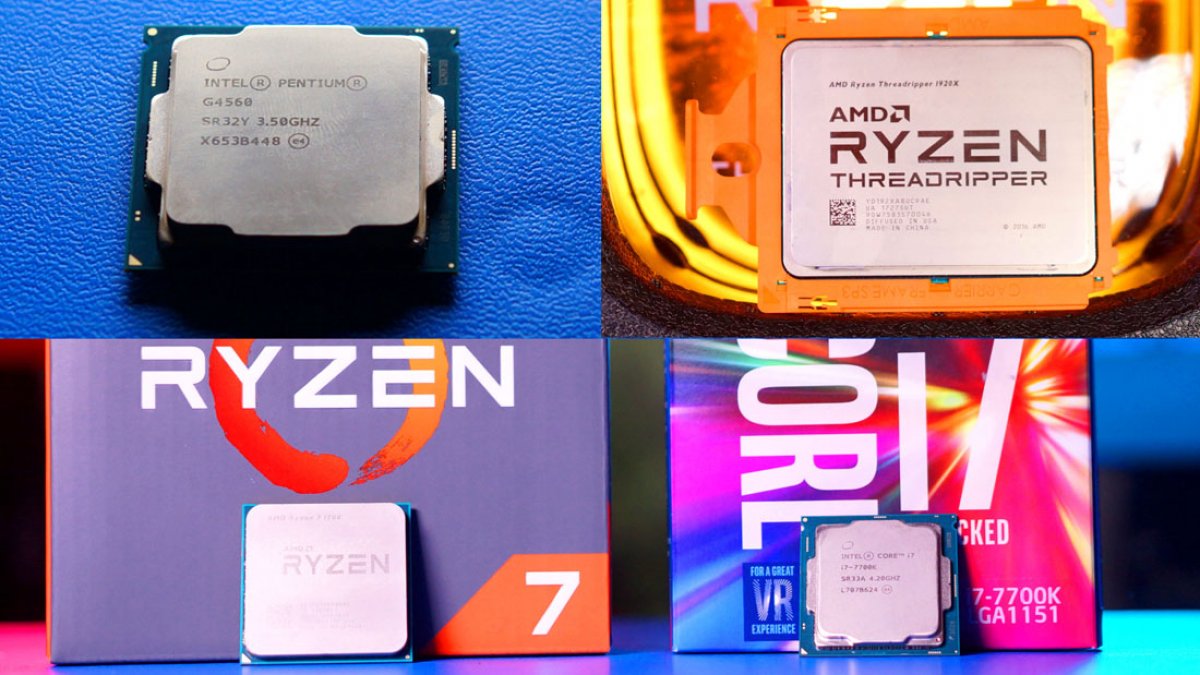 As we continue to push through the busiest week of the year, we’re ramping into more end-of-year recap coverage pieces, pooling a year’s worth of testing into central locations. The first Awards Show was for the best cases of the year, and our next is for the best CPUs of 2017. This covers multiple categories, including gaming, hobbyist / small business production, overall value, and adds some special categories, like “Biggest Upset” and “Biggest Disappointment.”

As launch years go, 2017 has been the most packed of any in recent history. The constant back-and-forth between Intel and AMD has largely taken the spotlight from the rest of the industry, as each company moves to ship directly competing products in rapid-fire fashion.

This content looks at the best CPUs for 2017 in gaming, production (3D modeling, animation, and video rendering), budget gaming, and overall balance.

Data isn’t our focus for today. This is a coverage recap, which means we’ll be pulling charts sparingly and as needed from our CPU reviews. As you dig through older coverage pieces, keep in mind that CPU testing, unlike case testing, must be updated regularly. Windows and game updates have had numerous non-trivial impacts to performance throughout the year, so we’d advise referencing our latest three reviews (listed in order of newest to oldest) for the updated charts:

These reviews included the most up-to-date numbers for AMD Ryzen and Threadripper, too, which both saw somewhat noteworthy uplift when compared to older versions of Windows and older tests. Our testing methodology has also significantly changed, as we’ve updated software solutions, Windows, drivers, and test patterns.

We’ll still be linking individual reviews for each product as we go, as many of the closing thoughts are similar, even if numbers are updated in the above reviews.

Our first award, “Best Overall Value,” teetered between the R5 1600 and i5-8400 – but the R5 1600 ultimately won the award. Back when the R5 CPUs launched, we declared the Kaby Lake i5s as approaching obsolescence, and awarded the R5 1600X with our Editor’s Choice award. The 8th-Gen launch strongly challenged the R5s in many instances, but lacking B/H motherboards and paper supply further fuels the R5 1600’s receipt of our Best Overall Value assignment. The rest of the fuel stems from competitive performance across the whole suite of tests. 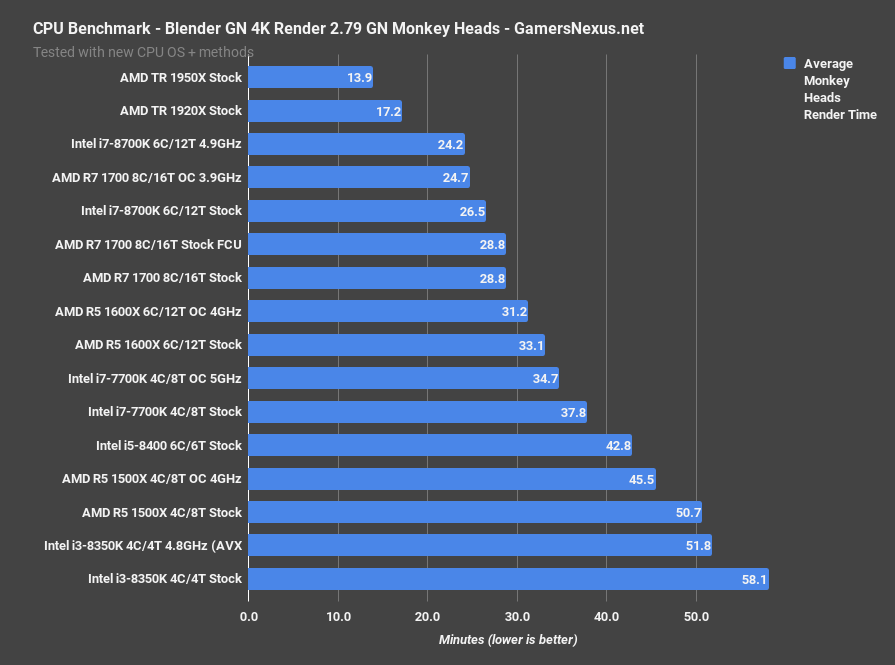 The CPU manages to keep within a couple percentage points of the i5-8400 in most games tested, aside from a select few titles that don’t play well with Ryzen, like Destiny 2 and GTA V. If those are going to be your years-long obsessions, maybe look at other options, but for all-around performance, the R5 1600 offers overclocking headroom upwards of 3.9 to 4.1GHz, has plenty of affordable motherboard options, and maintains a strong lead in rendering workloads. Of course, comparatively few users actually leverage the production capabilities of the R5 CPUs versus those who boast multitasking capabilities, but the R5 CPUs give mobility for exploring beginner professional workloads.

And that’s the main reason we like this CPU: It’s an option that gives excellent beginner avenues to learn overclocking – ones which yield very direct gains in performance – while also offering beginner or intermediate options for workstation tasks. Gaming performance never chart-tops in our tests, but it’s also not that far behind the 8400, and even closer when accounting for 2666MHz memory with a hypothetical B- or H motherboard. The R5 1600 receives our highest praise for its whole value proposition, and we find the CPU to be a genuinely exciting gateway for inbound enthusiasts.

Ignoring the value side of things, we see Intel’s i7-8700K as the most well-rounded CPU launch in the sub-$500 class for the year. The 8700K and its Z370 platform have wide-reaching memory support, high overclocking potential – even on our potato chip, we hit 4.9GHz – and pushes chart-topping performance in gaming workloads. Short of going for Threadripper or Skylake-X, the 8700K is also able to keep up with 4GHz R7 CPUs. Intel’s usage of the HCC TIM on the 8700K also significantly helped with its thermals, making the CPU completely reasonable to operate without a delid, though delidding does still grant tremendous gains that aid in power leakage reduction, something we showed in our review. 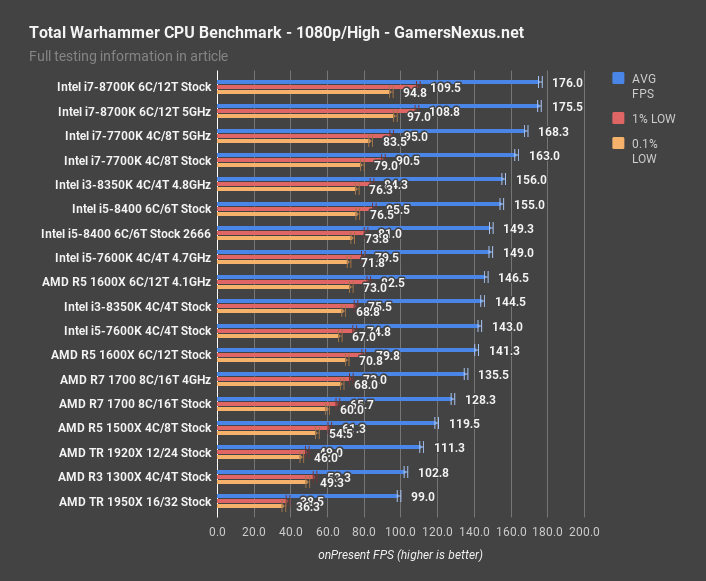 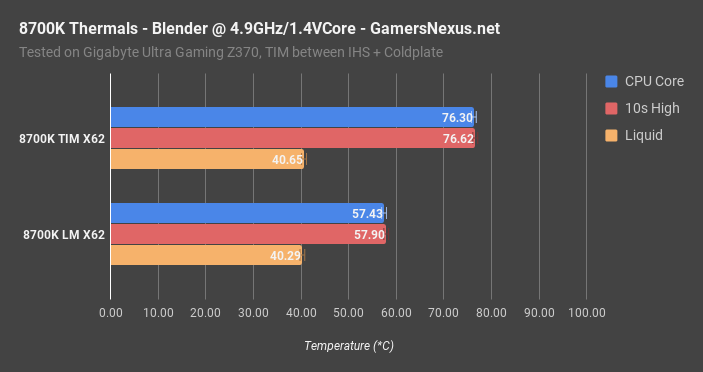 Overall, the 8700K is a strong showing from Intel, and was the company’s return to form after years of small increments. Intel’s move to 6C/12T is just as important for AMD as it is for Intel, as the transition will help secure development focus on multi-core optimization for years to come. The 8700K also improves in key areas where Intel has fallen behind, like the improvement to thermal performance by way of die area increases and HCC TIM. The CPU also exhibits strong performance in H264 livestream encoding, an area where the 7700K was heavily outmatched by the 1700. It’s just a matter of whether you can find one in stock, unfortunately, and whether that retailer is selling close to the $370 suggested price. 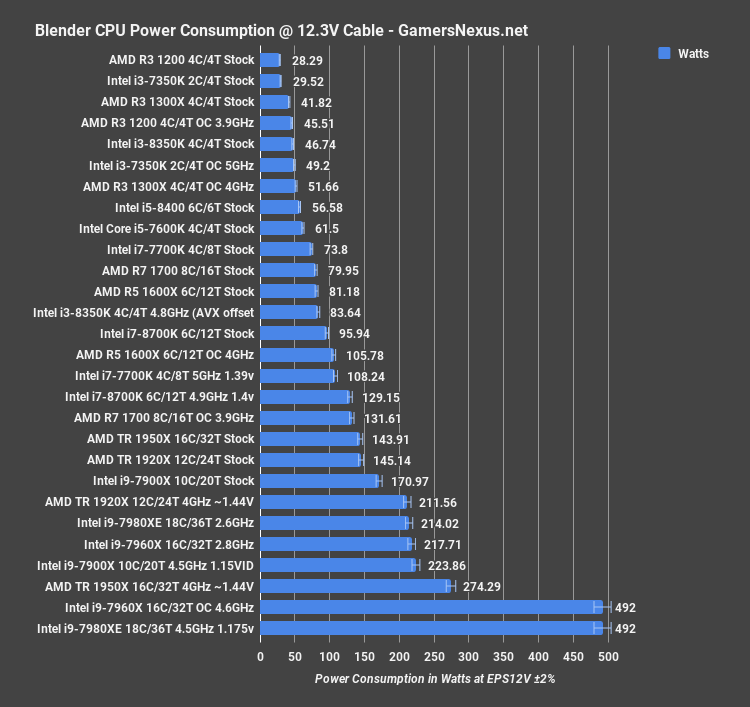 Maybe you don’t care at all about gaming, though, and need something that’s a bit more money-efficient. The R7 1700 takes our award for Best Value (Production) CPU. Since its launch, we have held the R7 1700 high over the heads of its 1700X and 1800X neighbors, time-and-again demonstrating how easily the R7 1700 is overclocked to achieve similar, if not better, performance to the more expensive alternatives. With pricing regularly seeing sales as low as $270, but commonly sitting around $300, the R7 1700 easily takes this award. We see the 1700 as a good fit for small businesses and hobbyist or freelance workstation users – people who do 3D animation, for instance, or other render-centric tasks that can benefit from core count. The R7 1700 stands alone in its value offering for such users. The 1700 is AMD’s best launch in the R7 family: It’s power efficient, it has overclocking headroom, it handles multithreaded render loads readily, and it’s affordable. 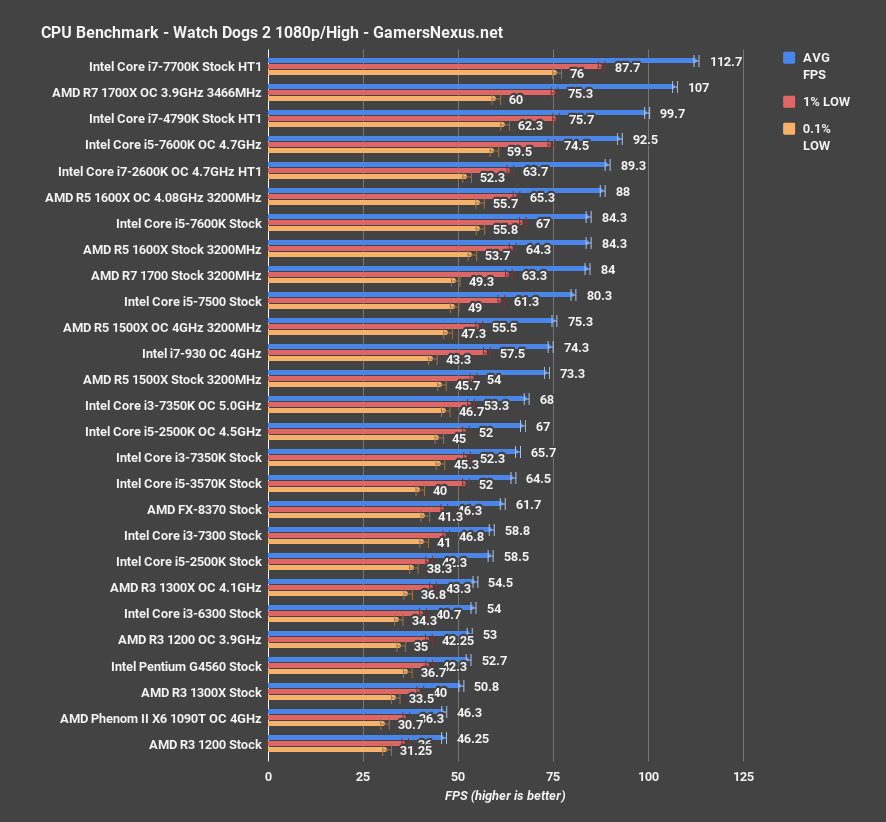 (Note: The above is from older data earlier in the year; we have not rerun the G4560 with our new test methods or the CU)

The next award is for the Best Ultra-Budget Gaming CPU, going to the Intel Pentium G4560. The G4560 has lived a troubled life: Like the G3258 before it, the G4560 saw instant success in low-budget markets, and quickly sold-out. The CPU also shot-up in price, has gone through supply shortages, and has been difficult to get ahold of. Now, finally, the G4560 is readily available; even at its slightly higher-than-desired price of $70-80, the G4560 remains one of the best options for a dirt-cheap desktop gaming PC. 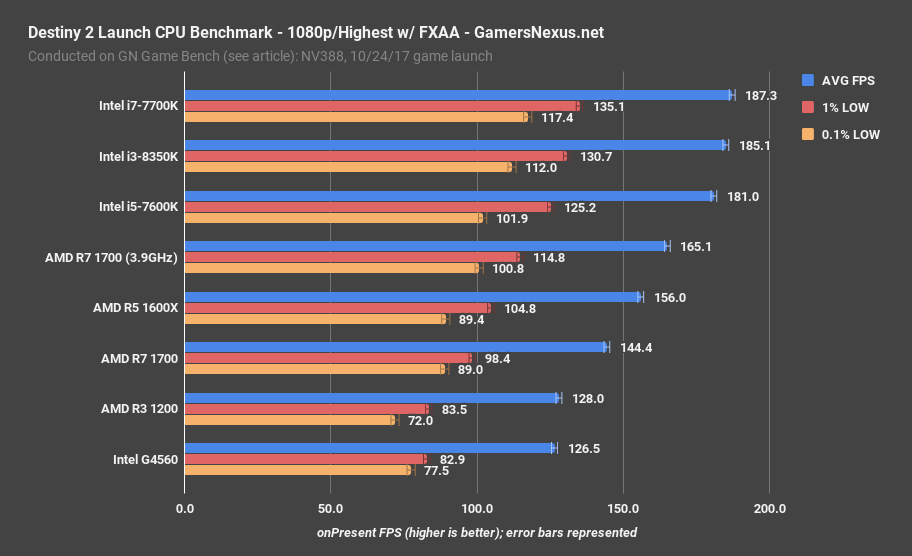 Note: This one is updated for our modern testing & CU!

The CPU performs reasonably in most games we’ve tested. We even performed a G4560 GPU bottlenecking test earlier this year, finding that the CPU didn’t significantly choke GPUs until stretching into GTX 1070 territory. The G4560 is well-suited for RX 570s and 470s, GTX 1050 Tis, and GTX 1060s. Now, for purposes of balancing system cost, we’d probably recommend staying in the sub-$200 GPU range – but you’ve got room to go a little beyond that. Not much, but it’s there.

For when cost is the heaviest restriction and $120 CPUs aren’t an option, the G4560 remains competitive. 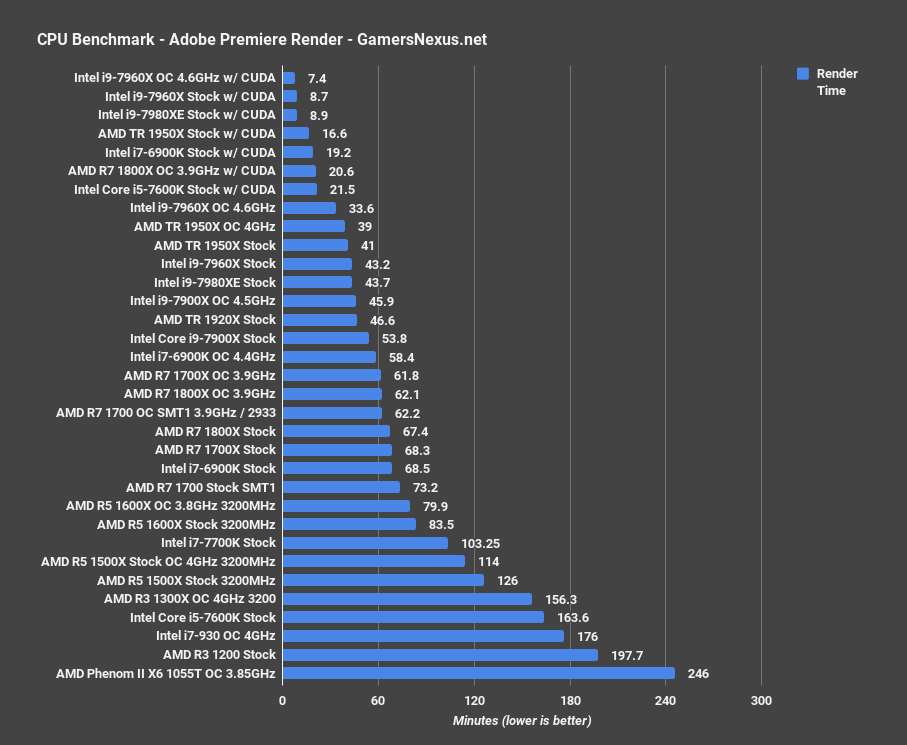 Although it was largely overshadowed by other coverage, we had the most fun overclocking the i9-7960X this year. It required a lot of prep work – delidding and some Conductonaut set the stage, with big radiators and high-end fans doing the rest. This award is shared equally by the ASUS X299 Rampage board for its limitless, nigh-overwhelming overclocking options and sub-options. With a direct fan on the VRM and a delid, we were able to push the 7960X into the range of 4.7GHz with just a 360mm radiator. We were nearly stable at 4.8GHz, too, and some further tuning may have achieved it. Pushing 4.7GHz on a 16C CPU, although its 500W power consumption made it impractical for long-term use, was a fun day of testing that reinvigorated our enthusiast spirits.

This next category is for the Biggest Upset of 2017. Before the launch of Threadripper, we thought this would go to the R5 CPUs – but Threadripper and X299 completely changed the HEDT landscape. Threadripper’s launch upset the high-end market in a way that has had wide-reaching impact. At the price, the $1000 Threadripper 1950X (note: currently on sale for $800) has some of the best performance in heavily multithreaded workloads, and is challenged most heavily by significantly more expensive Intel CPUs. Additional PCIe lanes become highly valuable in use cases that are left otherwise unserved, and Threadripper manages to serve both traditional HEDT and fringe HEDT users exceptionally well. For this category, we favor the 1950X.

Oh, and before someone begins typing a gigantic tirade, please note that “Biggest Upset” is not a bad thing – we’re saying it upset the incumbent in the market, not that it’s upsetting. That’d go to the next category.

And that brings us to the Biggest Disappointment. Across all the products launched this year, there are many contenders for Biggest Disappointment, but the absolute, hands-down winner of this dunce cap is the Kaby Lake-X CPU line. We were clear in our dislike of this lineup when it launched – some of you took issue with our disrespectful tossing of the 7740X CPU – but that’s a minor grievance when compared to how Intel tossed Kaby Lake-X users aside with Coffee Lake. Mere months after its nearly pointless launch, the languishing Kaby Lake-X CPU argument became more belabored in the face of Coffee Lake. The Kaby Lake-X launch is the single biggest CPU disappointment since Bulldozer. It’s not horribly performing, but it also has no wide-reaching, mainstream defense to its existence. The product line was a bullshit segmentation attempt from the start, and has remained such.

The final award is for Worst Trend. We’re using this one to call-out commenters: AMD and Intel have both put out some good CPUs this year, and when we look at head-to-head matchups at the same price, there tend to be victories on both sides of the fence. The Worst Trend award goes to everyone who felt it necessary to forge new truths – also known as “making things up” – to try and defend their preferred CPU in every possible use case. News flash: No one CPU will be the best at everything and, when something like Ryzen or Coffee Lake are as good as they are at their respective strengths, there’s no need to make things up. No, objectively speaking, an R7 1700 is not “smoother” in gaming than a modern i7, and no, an 8700K does not invalidate the 1700 as a world-class production CPU. It’s possible for both to coexist and dominate different markets, with some fortunate cross-over between that permits versatility.

Separately, with the advent of 6C Intel CPUs and Ryzen push, we’d like to remind everyone that Chrome and Discord don’t count as “multitasking.”