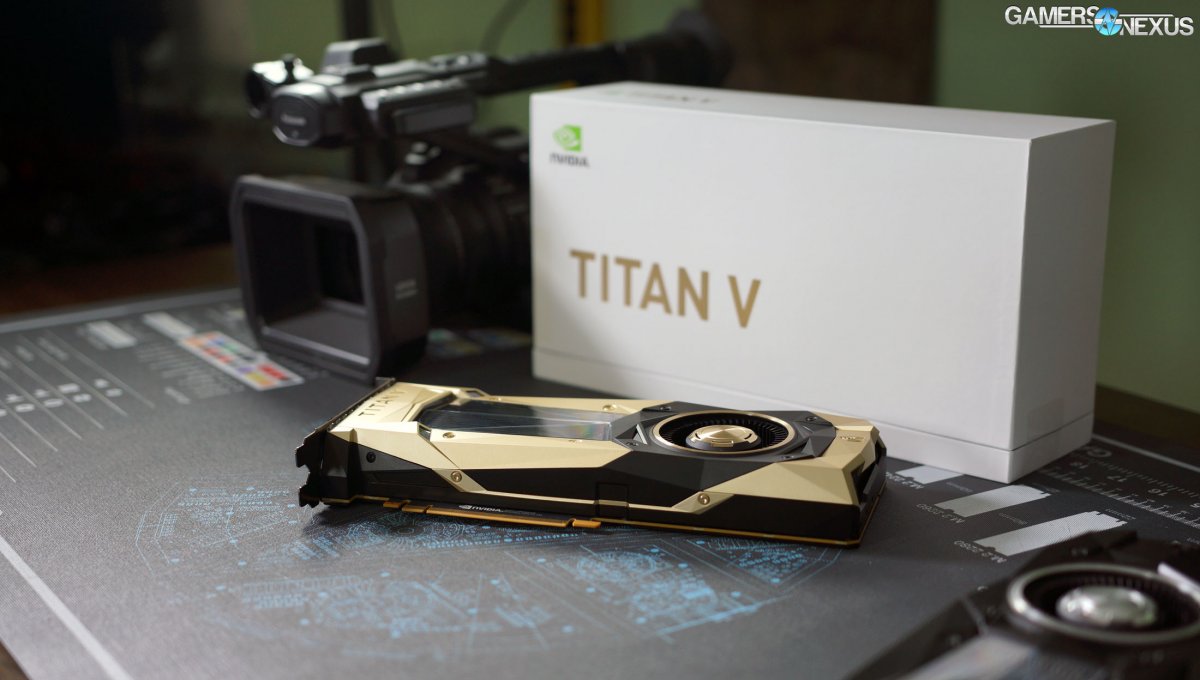 The nVidia Titan V graphics card is not targeted at gamers, but rather at scientific and machine/deep learning applications. That does not, however, mean that the card is incapable of gaming, nor does it mean that we can’t extrapolate future key performance metrics for Volta. The Titan V is a derivative of the earlier-released GV100 GPU, part of the Tesla accelerator card series. The key differentiator is that the Titan V ships at $3000, whereas the Tesla V100 was available as part of a $10,000 developer kit. The Tesla V100 still offers greater memory capacity by 4GB – 16GB HBM2 versus 12GB HBM2 – and has a wider memory interface, but other core features remain matched or nearly matched. Core count, for one, is 5120 CUDA cores on each GPU, with 640 Tensor cores (used for Tensorflow deep/machine learning workloads) on each GPU.

The Titan V runs significantly lower clocks than what we’re used to seeing in gaming, but that’s the nature of hosting so many cores. We can make up for most of this with overclocking, which we’ll detail below:

This is our overclock “stepping table,” as we call it. For overclocking, we observed the complete stock card operating a peak frequency of 1682MHz in Firestrike Extreme’s looping stress test, with an average of 1507MHz after thermal limitations. Simply increasing the fan speed to 90% immediately pushes us to 1605MHz average, with no other changes. We next increased the power target and fan speed, dragging us up to 1672MHz average. From there, we incrementally stepped core offset upwards, eventually encountering stability issues at around 225MHz.

Our final core offset was 200MHz, and the final HBM offset was also 200MHz. We left the fan at 100% speeds and were still bound by thermals, sitting around 81-84C. We’ll be talking about power consumption in a separate content piece, as that’s another topic entirely, and will require much more research.

This card has a lot more room for overclocking in it, but we need to liquid cool it and might do some shunt mods. As of right now, we’re hitting a hard thermal limit and a hard power limit, both of which constrain our clock potential. As with Pascal, we’ve learned that Volta’s Boost behavior is much the same as Pascal’s, and that temperatures sub-60C are the most beneficial for clock performance. Tipping past 60C, then 66C, then ~71-72C, then into the 80s does cost performance.

The card still seems to follow a similar hard limitation policy of ~84C for its thermal wall, but often remains closer to 81C under our overclock, a 100% load, and with fans at 90-100%. This is constraining us, and we’ll need a solution. Our thermal analysis content will look into that aspect of performance, but we need to get back to gaming.

Again, the point here is to take multiple types of games, key APIs, and other performance indicators to study the future of nVidia’s Volta architecture. We suspect that some of this may carry-over to Ampere, which has an indeterminate launch window.

Synthetics are important to begin with, as they’ll establish our baseline and grant us a means to analyze why performance is the way it is. With synthetics, we know specifically what each test is stressing, and so can pinpoint strengths and weaknesses in the Titan V.

Continue to the next page  for gaming & synthetic benchmarks.