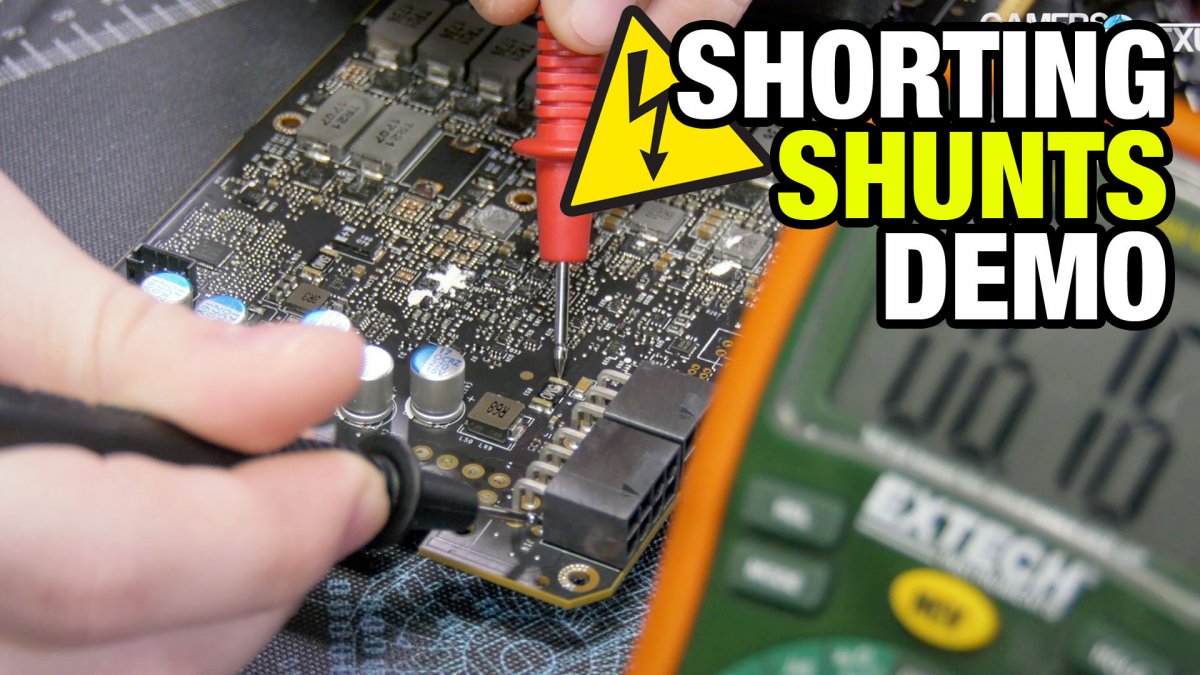 The goal for today is to trick an nVidia GPU into drawing more power than its Boost 3.0 power budget will allow it. The theoretical result is that more power will provide greater clock stability; we won’t necessarily get better overclocks or bigger offsets, but should stabilize and flatline the frequency, which improves performance overall. Typically, Boost clock bounces around based on load and power budget or voltage. We have already eliminated the thermal checkpoint with our Hybrid mod, and must now help eliminate the power budget checkpoint.

This content piece is relatively agnostic toward nVidia devices. Although we are using an nVidia Titan V graphics card, priced at $3000, the same practice of shunt resistor shorting can be applied to a 1080 Ti, 1070, 1070 Ti, or other nVidia GPUs.

“Shunts” are in-line resistors that have a known input voltage, which ultimately comes from the PCIe connectors or PCIe slot. In this case, we care about the in-line shunt resistors for the PCIe cables. The GPU knows the voltage across the shunt (12V, as it’s in-line with the power connectors), and the GPU also knows the resistance from the shunt (5mohm). By measuring the voltage drop across the shunt, the GPU can figure out how much current is being pulled, and then adjust to match power limitations accordingly. The shunt itself is not a limiter or a “dam,” but a measuring stick used to determine how much current is being used to drive the card.

Shorting the shunts will effectively “trick” the card into thinking it’s pulling less current than it is, resulting in the card drawing more current still – the result is more stable clocks, as we’re bypassing power budget limitations through a hardmod.

As we ran these tests, though, we learned that nVidia already does an exceptional job at saving on power budget without significantly killing performance. We do see performance gains from the shunt mod, but considering we’re looking at 2x power consumption versus ~3% performance uplift, it’s safe to say that the cards are already operating at near optimal efficiency.

Regardless, for top-ranking OC charts, we don’t care about efficiency. The video contains a visual walkthrough of applying liquid metal for the mod (we used Thermal Grizzly’s Conductonaut), and the article (and back-half of the video) contain the rest of the testing information.

One big note here: We ended up shorting three shunts on the right-half of the Titan V PCB, leaving the PCIe slot shunt alone. This one was easy to identify, as you could see the traces leading between it and the PCIe slot connector. Another note: Adding more liquid metal will be more effective, but you begin greatly increasing risk of (1) LM dripping and shorting other components, thereby killing the card, or (2) LM eating the tin solder around the shunt resistor.

We used our above game bench for most testing. Some tests used our X299 HWBot competitive bench, detailed here. 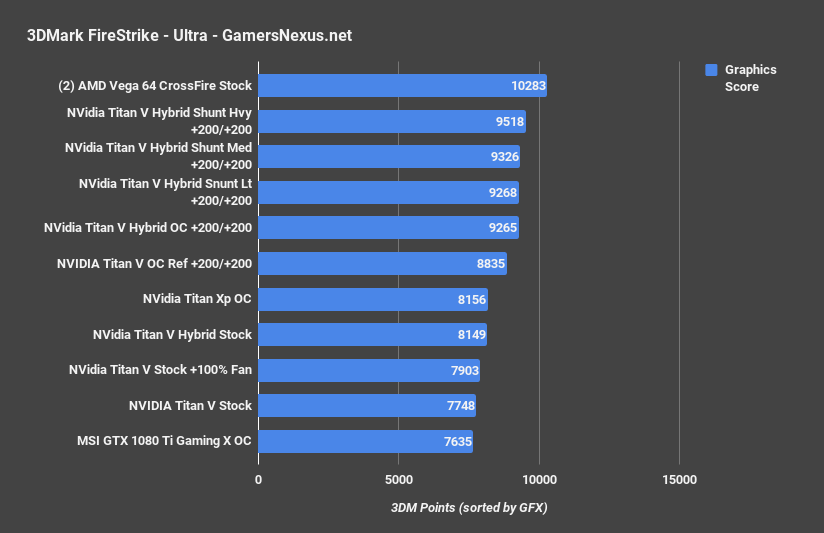 Let’s start with some Firestrike scoring, just to establish what sort of gains we’re seeing, then we’ll use frequency & power versus time charts to look at why those gains are happening.

With Firestrike Ultra, our first shunt mod attempt had us scoring roughly the same as our normal Hybrid card without the shunt mod. The differences were within variance and error. After consulting Buildzoid and several Der8auer videos on this, we decided to short the third shunt. Again, we got the same results – not shown in this chart – and so then decided to add more liquid metal.

That’s where we finally started seeing change. With a medium application of liquid metal – a bit more than we showed in the earlier portion of this video, but not yet a pool of it – we were able to achieve a consistent score uplift of about 0.7%. It’s not much, but it was consistent, and that was enough to show that we were onto something. Adding more liquid metal helped: We boosted up to 9518 points, equating about a 3FPS gain over the non-shorted shunts. The result is a boost of about 2.7%. That’s enough to start budging our scores higher, if shooting for higher ranks in competitive overclocking. It’s not much for actual gaming, as we’ll show in a moment, but it’s something. 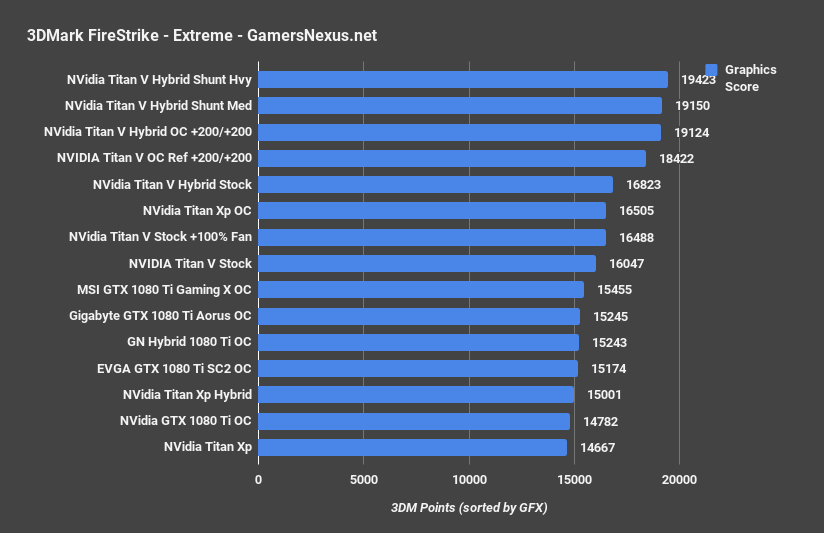 We saw less scaling with Firestrike Extreme, expectedly, but will look to our X299 bench for bigger gains momentarily. What’s more interesting is that the shunt mod provided enough power to our GPU to complete the Timespy benchmark. Previously, without the shunts shorted, we had issues with Timespy crashing under this overclock, and could not complete the benchmark without reducing clocks or increasing liquid metal on the shunt resistors.

Sniper Elite shows minimal gains in this one, though: 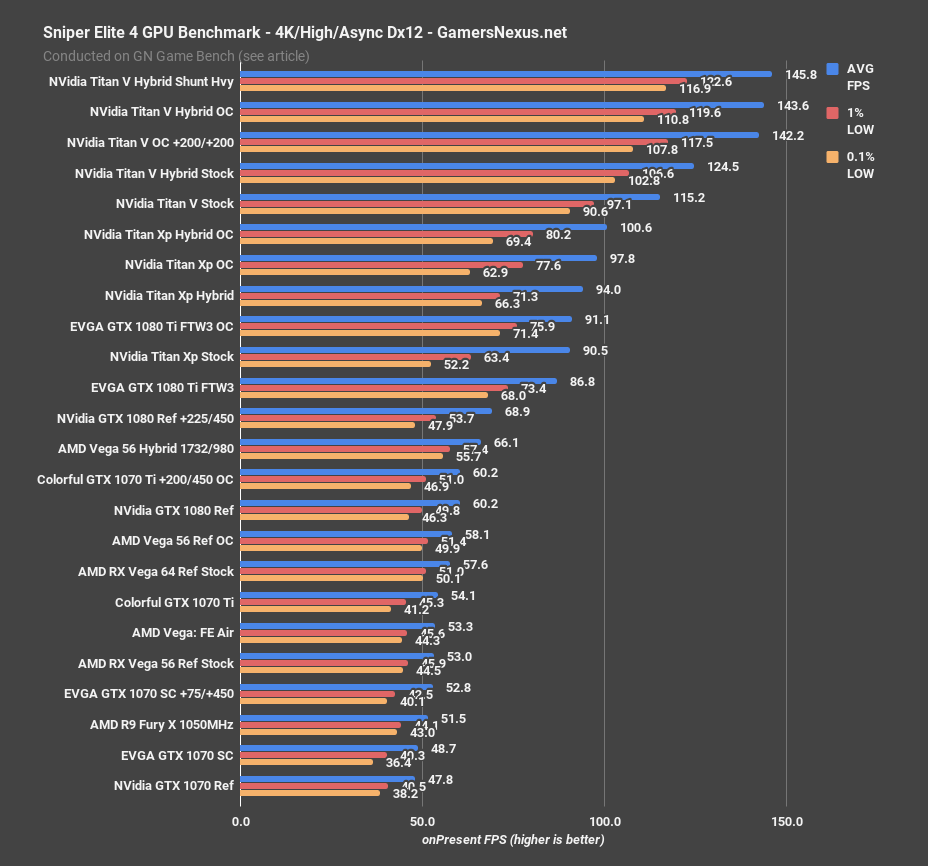 Here’s why we’re seeing those gains: You’ll notice that most tests, like the benchmarks without shunt shorting, have some fluctuation and dithering between clock frequencies. Although we can hit peaks of 2000 to 2032MHz, the clock won’t hold, and will spend a lot of time ramping up and down based on Boost parameters. Because we’ve mostly solved for thermals and are operating at steady state, our limiter is power. 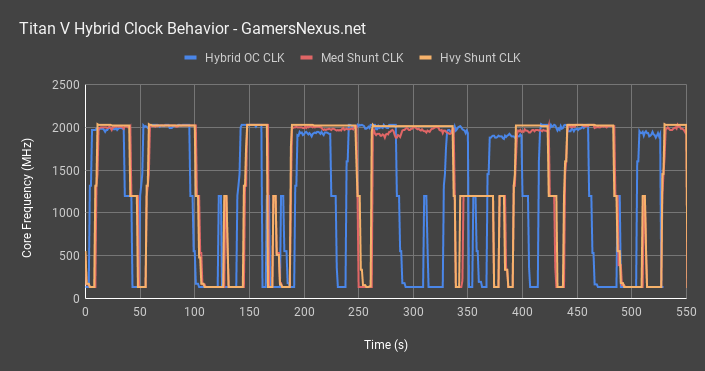 The heavily shorted shunts show a nearly flatlined frequency, which is what you want. Notice that the frequency isn’t any higher than previous peaks, but is holding steady at a nearly perfect 2017MHz. This steadiness, similar to what existed during the Boost 2.0 era, is what contributes to our boosted scores. The clock is holding, rather than bouncing between 2032 and 1900MHz. 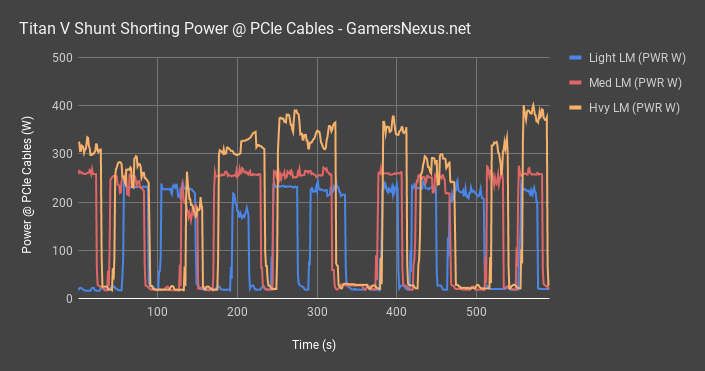 Here’s a look at wattage down the PCIe cables. As a reminder, power is equal to current*voltage, so we’re pushing up to 33A in some situations, where we were previously stuck to about 18-19A. With a 12.3V rail, that puts us at 406W peak down the PCIe cables, versus the previous maximum of about 234W. This does not account for PCIe slot power, but we didn’t short that shunt, so it is at the baseline from before the shunt mod.

And for anyone worried about VRM temperatures, we had that covered. As in our livestream of taking a top 10 record, we had a 120mm Corsair ML fan blasting the left half of the VRM, a Be Quiet! fan blasting from the top, and a Noctua NF-A14 blasting the right-side and the back-side of the PCB. Not only were the FETs within operating range, they were cooler than on the stock card. 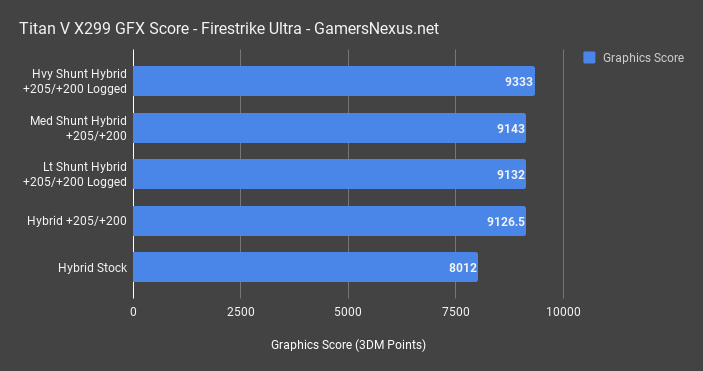 Our X299 bench scores improved a bit, and would help bump us up another place in HWBot scoring, if we were to revisit. We’ll consider that for this weekend, perhaps.

Conclusion: Are Shunt Mods Worth It?

The immediate answer to the above is simple: “Probably not.” It’s worth doing for competitive overclocking, it’s worth doing for sake of learning, and the risks aren’t all that bad. Realistically, though, the gaming uplift is minimal, and nVidia has already done a good job to optimize for power consumption versus performance. With 200W more power, we were only boosting performance by about 3%. Sure, that’s enough to gain a rank in Firestrike world rankings, but that’s not really a common use.

We could get more out of this mod, probably; we know that other XOC modders have, and we’re new to this type of work. Thus far, we’ve minimally proven the concept, and have now illustrated how it all works to stabilize clocks.