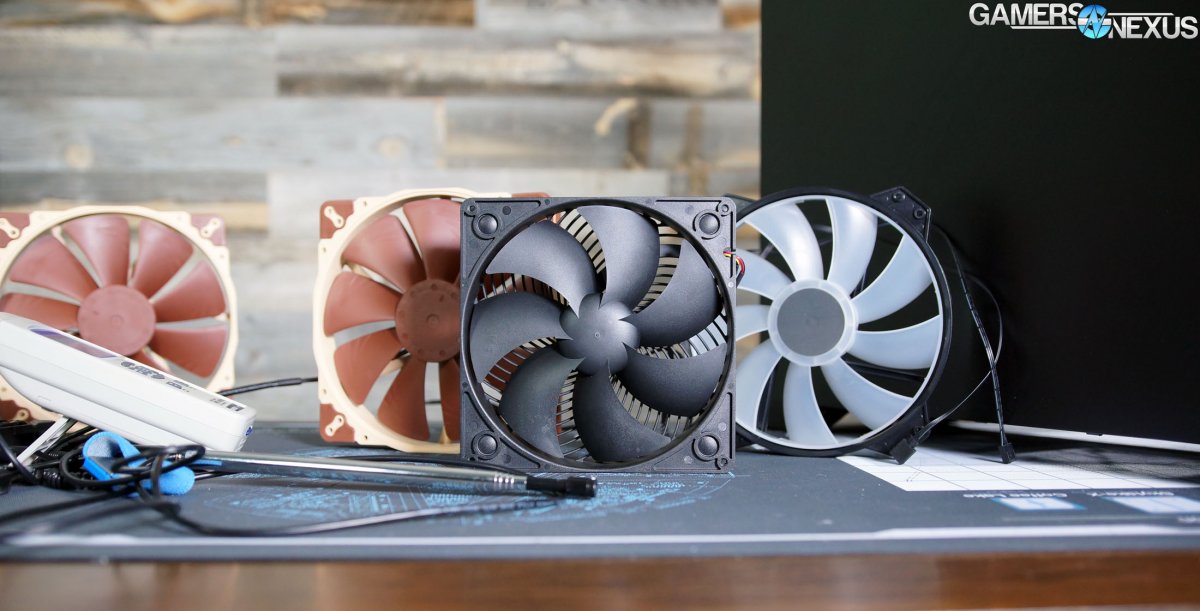 We thought it’d be fun to revisit the leading large fan of its time, the SilverStone AP181, and test it for airflow, noise, and cooling performance versus the more modern Noctua 200mm & CM 200mm fans. Note that, as always with fans, the most important metrics are those of airflow (measured in linear feet per minute) and noise (dBA). Temperature testing has enough variables, as does fan testing, that it is difficult to establish differences outside of error. Note also that we’ve changed our testing approach from the previous 200mm content, with previous testing using a mesh modified H500P. Our new testing reverts to the stock H500P (acrylic front) to create greater impedance and a worst-case scenario. Our LPM + dBA testing remains the same, and we’re still using a Throne side panel for mesh impedance testing.

Because we pulled the SilverStone AP181 out of the Raven case, we only tested the fan at its preconfigured 100% setting – 1300RPM – and preconfigured 65-70% setting, or 800RPM. At 800RPM, which is the same as the Noctua and Cooler Master fans at max, we measured 420LPM airflow, versus, roughly the same measurement from Noctua. These measurements are within margin of error of one another, and can be thought of as functionally equal. The Cooler Master fan runs a bit further behind, measuring at 378LPM. This is just 70% of SilverStone’s fan speed, though, and equalizes all 3 units to 800RPM. At 100% speed, or 1300RPM, we measured 620LPM airflow through the panel – this is impressive, and further establishes SilverStone’s legacy as one of the only companies to make a big fan that worked well.

Noise levels are fairly straight forward: The SilverStone fan operates at 44.5dBA under its maximum RPM of 1300, with roughly a 34dBA at 800RPM. This matches it near the Noctua and Cooler Master fans at the same 800RPM – or 100% RPM, for those two. Although objectively louder at max RPM, the SilverStone fan can push better noise-normalized performance, and has more headroom for bursting fan speeds under heavier loads.

Again, note that this is the least important segment, given error margins. Also note that we retested with a different front panel than last time.

For thermals, our 3DMark CPU + GPU load testing puts us at 34 degrees Celsius dT over ambient for the Cooler Master stock fans, looking at CPU temperature. The Noctua fans established a 31.6C temperature, dropping about 2.5 degrees off of the stock Cooler Master fans. SilverStone’s AP181s, meanwhile, did about 28 degrees when maxed-out, or 31.4 degrees Celsius when matched to the same noise level as the Noctua and Cooler Master 200mm fans. This gives us a bit more headroom in terms of max performance, thanks to the 1300RPM peak RPM, but also means we can still noise normalize to match other fans, while retaining similar or equal performance.

SilverStone’s AP181 remains a performance leader in the realm of large fans. Now, to be fair, it isn’t actually compatible with the H500P – and neither is the Noctua fan, technically. For Noctua, only two screws fit, and the lower half is taped to the case (despite being 200mm). For SilverStone, we use one screw, then tape the rest of it to the case. In this way, it’s more an academic test than anything, as you wouldn’t really want to use the SilverStone fan in this capacity.

That academic test, however, does give us a good look at how the fans perform. If there’s an instance where the AP181 is compatible, it’s still a high-performing fan, and we still recommend it. SilverStone does have alternative and more modern versions, but we’ll look at those later.