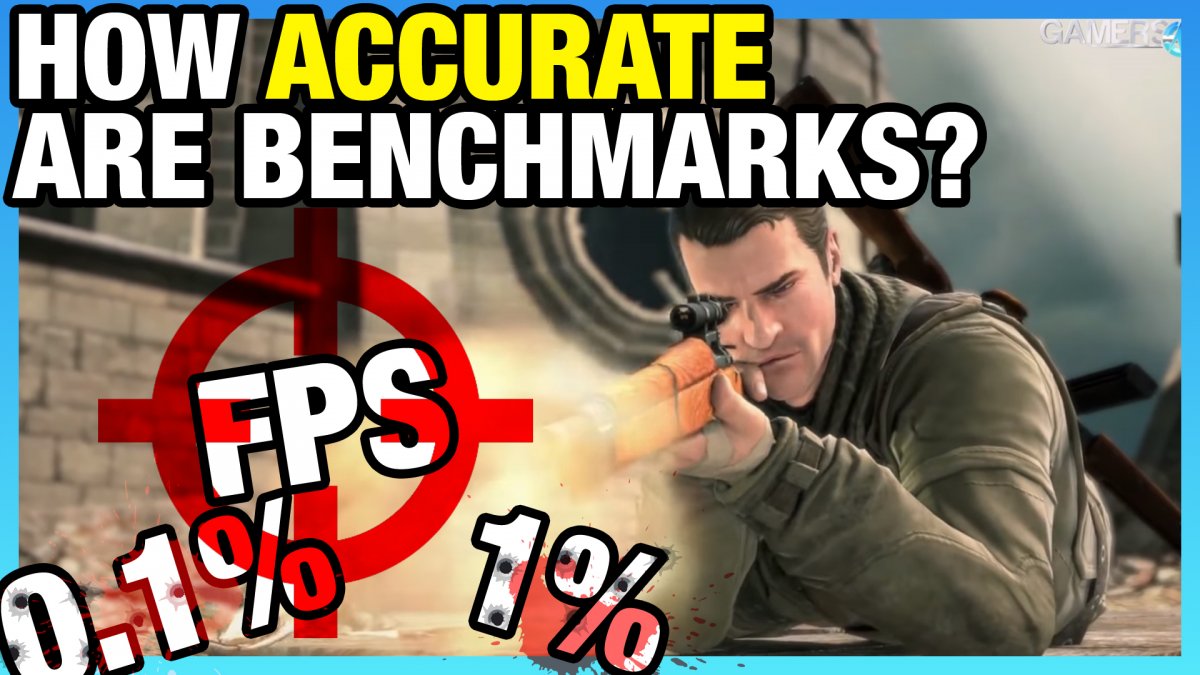 A reminder before we start: this isn’t about vendor A vs B. The goal is to establish a confidence interval for each game, so that we may then establish whether differences in framerate are either functionally identical or legitimately different. In Metro: Last Light, where we see nearly 0 deviation run-to-run, a 64FPS vs. 66FPS difference across all test passes may establish one device as technically superior. It would not be appreciably superior to the human eye, but it would be measurably better. In a game like Overwatch, where deviation can be quite high, we might say that a 64FPS vs. 66FPS difference is outside of our confidence as being a significant difference, and that the cards are functionally the same.

We often rerun tests after collecting these initial data points, depending on data consistency and integrity. Those reruns aren’t included here, as we’re just focusing on initial test consistency for this piece. 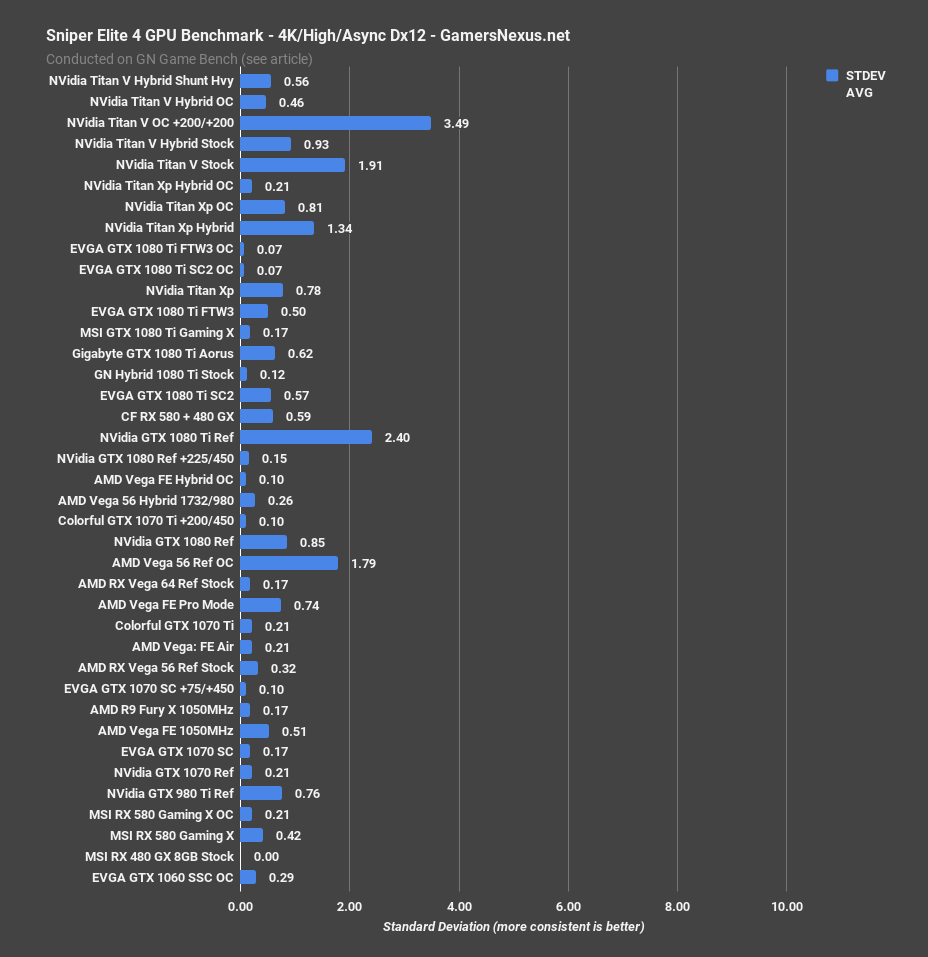 For Sniper Elite’s standard deviation in AVG FPS, we primarily see devices around the 0.1 to 0.8 marker, with a few jutting out noticeably from the pack. Of those that spike in standard deviation, we see the heavily overclocked Titan V and the overclocked Vega 56 cards, both of which are testing stability limits of the core. The Titan V remains a bit more volatile even stock, at 1.91FPS standard deviation.

Overall, it’s fair to say that this game is relatively consistent. There are some spikes outward, primarily with a trend developing toward higher-end devices that are pushing higher framerates, and thus more susceptible to variance in performance. In sum, though, this game has proven a great tool for testing asynchronous compute performance, low-level API performance, and has demonstrated relative accuracy in FPS numbers. When deviation runs high, we typically just run more test passes to determine if things smooth-out. If not, we make a note of it in the content. 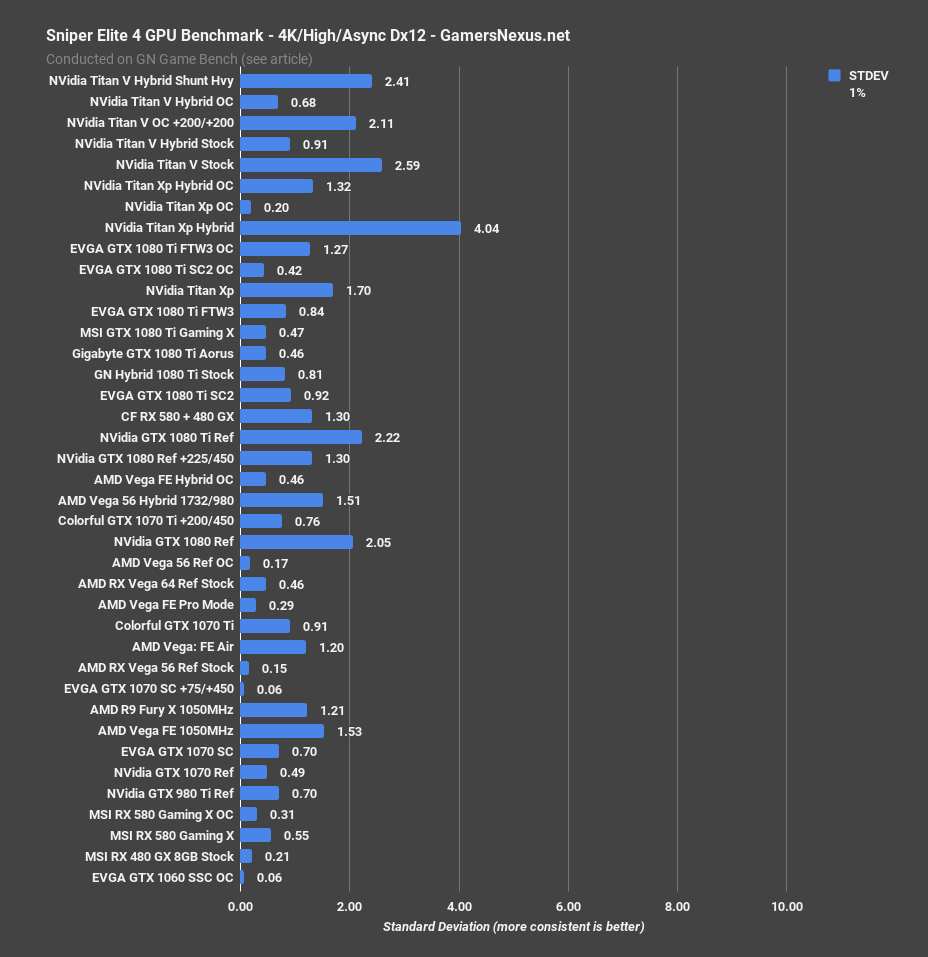 As for 1% lows, we see bigger spikes here that we always account for with error bars or margin of error discussion in the content. The nature of a 99th-percentile metric is that its accuracy is reduced, as you’re averaging from fewer data points. Still, overall, our standard deviation is within about 1FPS for most devices, with a good portion of devices limiting below 2.5FPS deviation. The Titan Xp Hybrid sticks out here at 4FPS for 1% low deviation, but this is an instance where we’d probably retest and analyze the reported clock data. It’s possible that this sort of deviation spike is from a change in the test path – in essence, technician error. 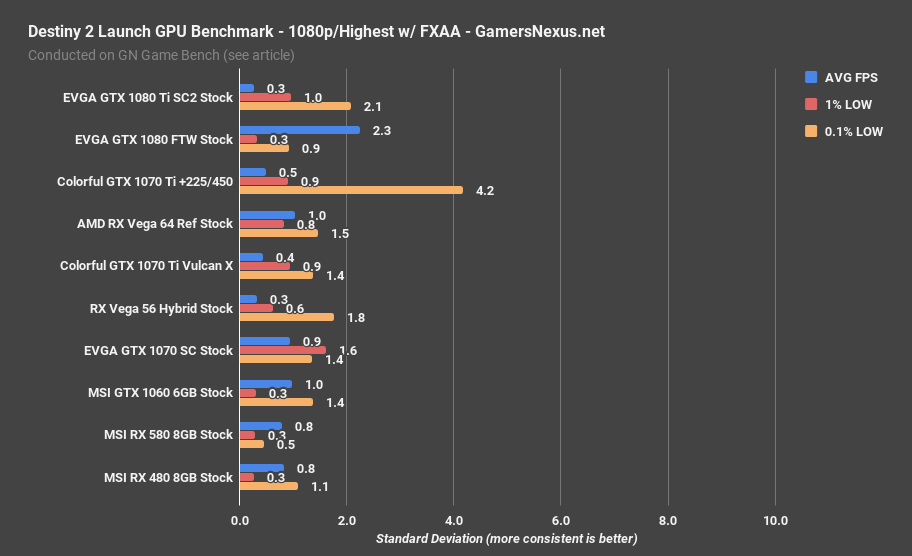 Here’s how Destiny 2 looks. In terms of averages, represented by the blue bar, we’re seeing a standard deviation of about 1FPS AVG, with the GTX 1080 FTW spiking outward and asking for a few more test passes.

1% lows also remain relatively consistent for a 99th percentile metric. We’re seeing standard deviation of about 0.7 for 1% lows, and about 1.6 for the 0.1% lows. The 0.1% low metric has a large spike from the GTX 1070 Ti, which we later reran and smoothed-out. In this particular instance, our higher standard deviation was a result of how the test software was instantiated – we didn’t have a long enough delay from button press to recording start, resulting in a stutter when the software was called. This data allows us to correct for that change. In the example of our 4.2 standard deviation here, the data points included a high of 103FPS and a low of 95FPS, the latter of which was a result of the program start time. Catching this prior to publishing our data is what allows us to improve data accuracy. 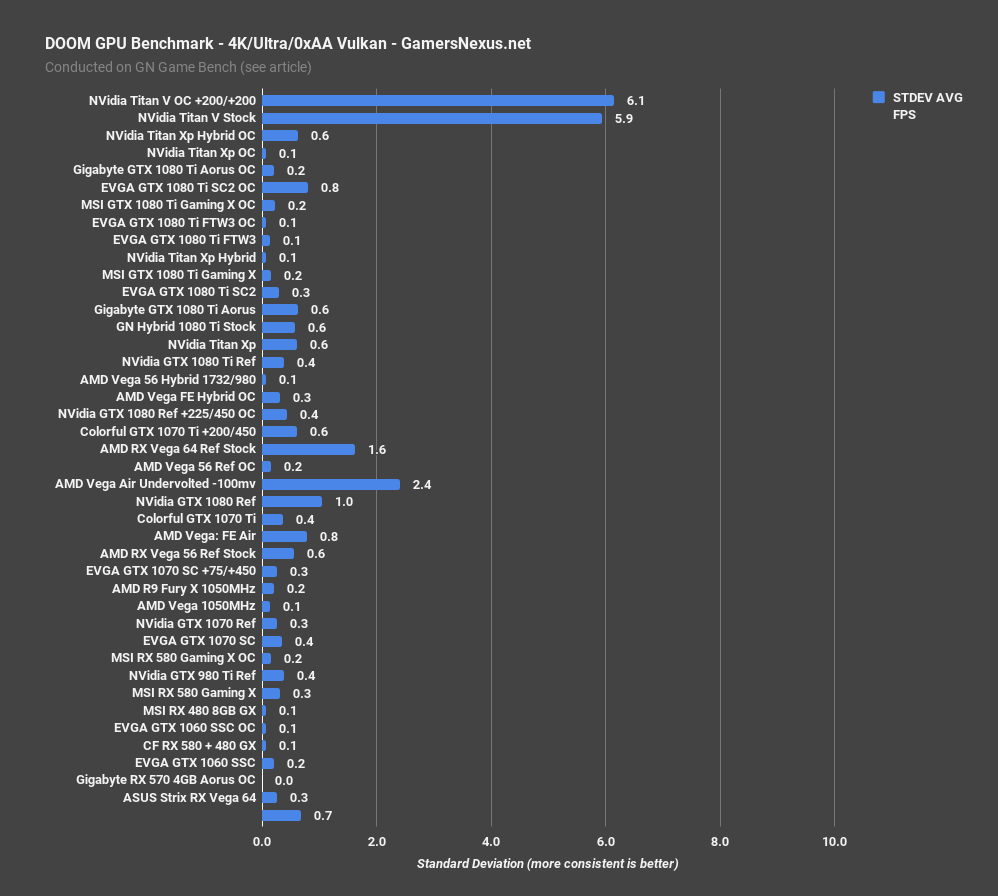 DOOM at 4K/Ultra is next. Note that, for this game, the engine bottlenecks performance at 200FPS – hence testing at 4K.

Overall, the game and its Vulkan API integration are exceptionally consistent. Ignoring the outlier products, like the Titan V and one Vega entry, AVG FPS deviates by about 0.6. Standard deviation spikes for the Titan V, where we had a performance range of 10FPS AVG from top-to-bottom. 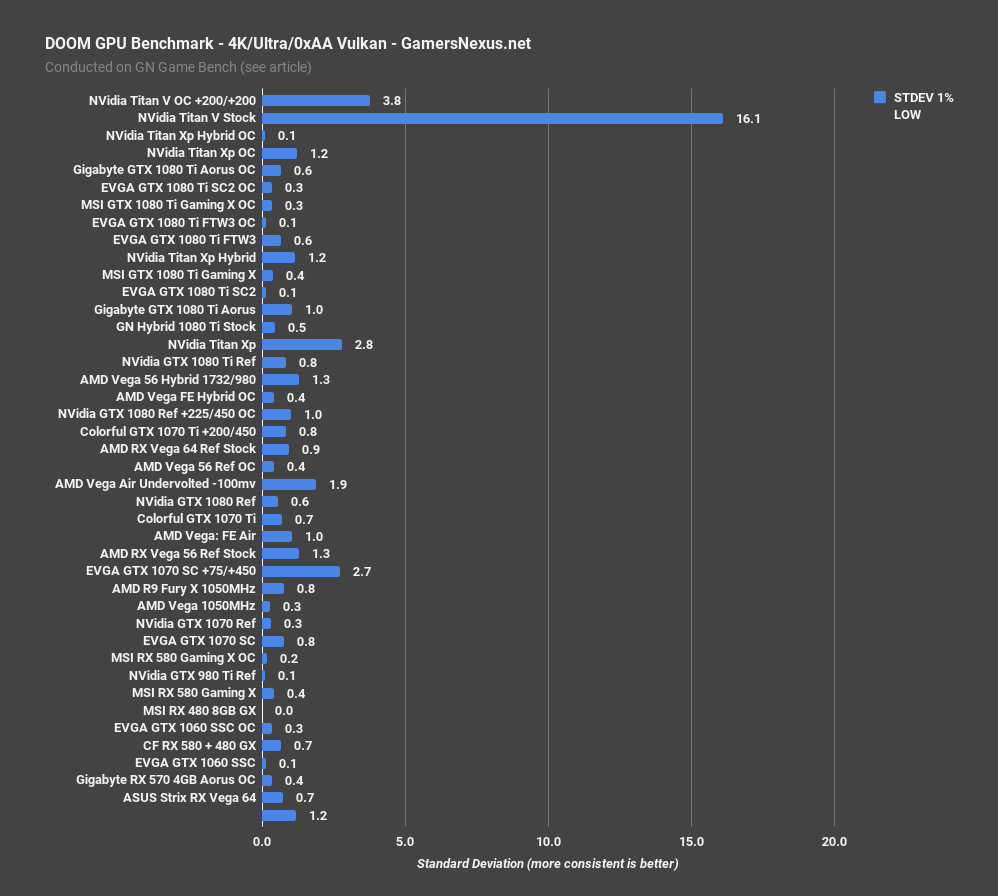 This next 1% LOW standard deviation chart gives an example of when we decide to rerun a test. The Titan V card here has a 1% low standard deviation of 16, but versus a lower overall value. This is from the same dataset as the AVG FPS outlier, which was later rerun. Aside from this point, most of the numbers run a standard deviation of 1 or below, which is very consistent for a 99th percentile metric. DOOM, like Sniper, proves to be reliable in its run-to-run variance and accuracy. 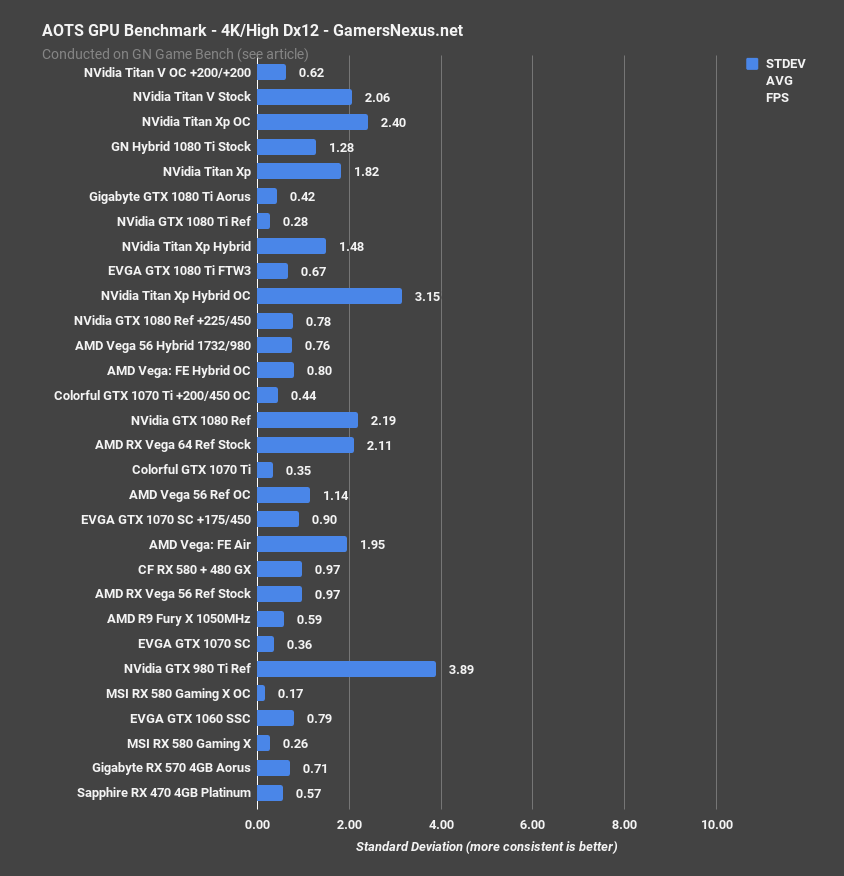 We mostly test Ashes of the Singularity at 4K, High, and using Dx12. This game proves to have more variance than most, something we’ve iterated time and again as we’ve used it more. For instance, we’ve noticed that performance will sometimes improve with more subsequent launches, up to a point of memory saturation. For this game, we see an average standard deviation of about 1-1.5FPS, with several line items exceeding a standard deviation of 2FPS. This is getting a bit disparate, but as long as we adjust our margins of error and variance, we can still use the benchmark as a tool for an optimized DirectX 12 title. 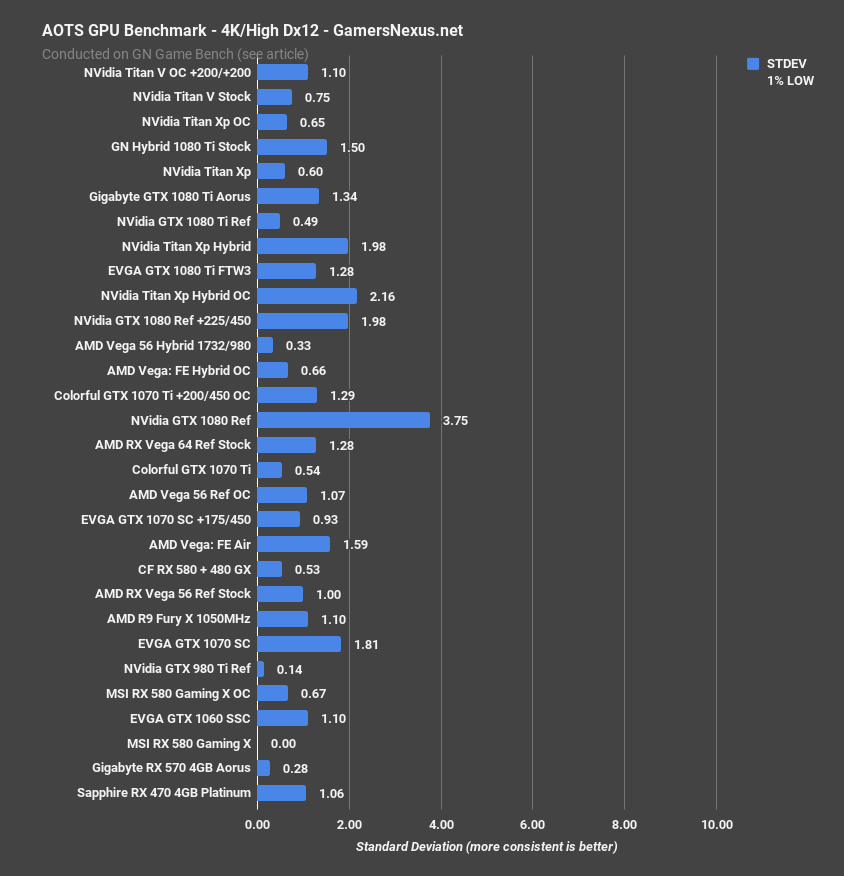 For 1% lows, it’s pretty consistent. The standard deviation here is completely within reason, with only one card jutting out past 2FPS. 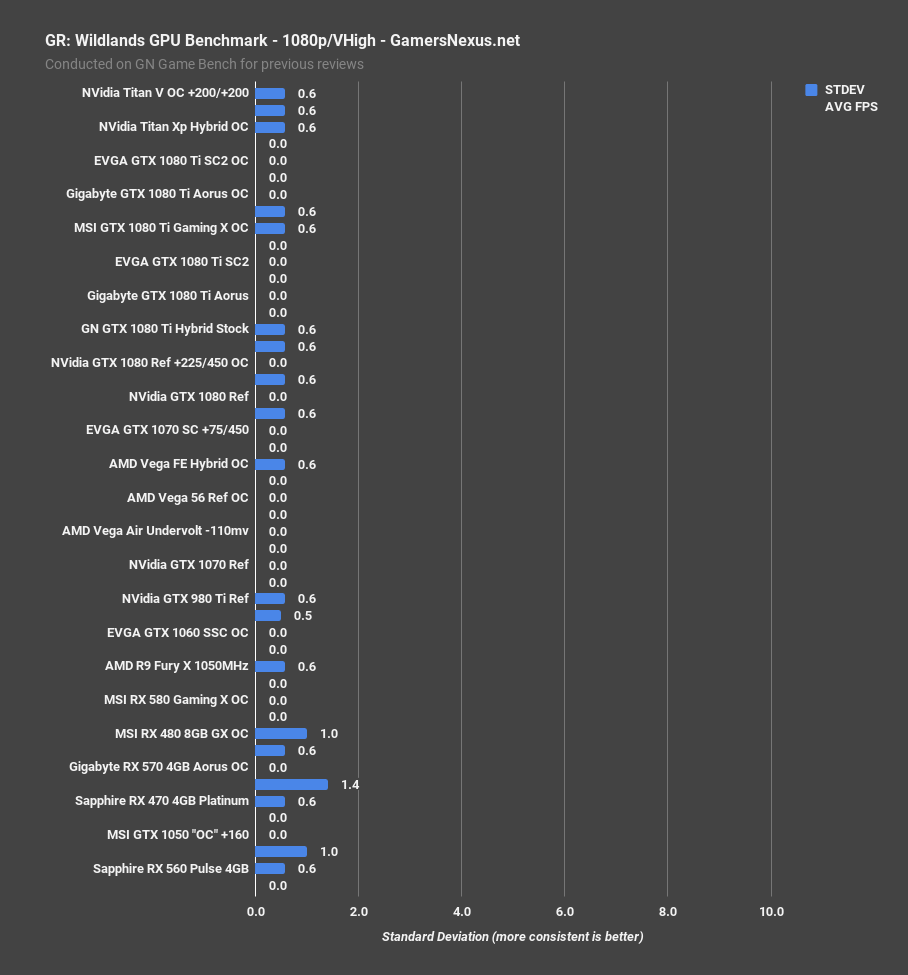 Ghost Recon: Wildlands, a Dx11 game, proves to be one of the most consistent and reliable. Our AVG FPS manages a standard deviation of 0 to 0.6, a result of the built-in benchmark’s profound consistency. This is similar to Metro: Last Light, in this regard, where we see nearly 0 run-to-run deviation. 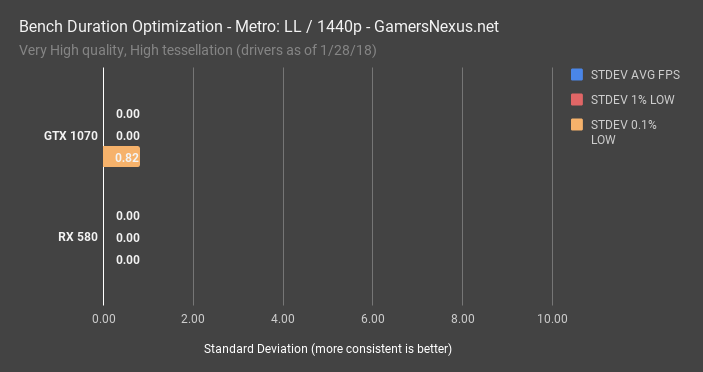 Speaking of, here’s that long-in-the-tooth game now, albeit only with the 1070 and 580 that we retested last week. For these, we saw a standard deviation that was functionally 0. We observed no real change in performance run-to-run, except for one dip for the 0.1% lows. 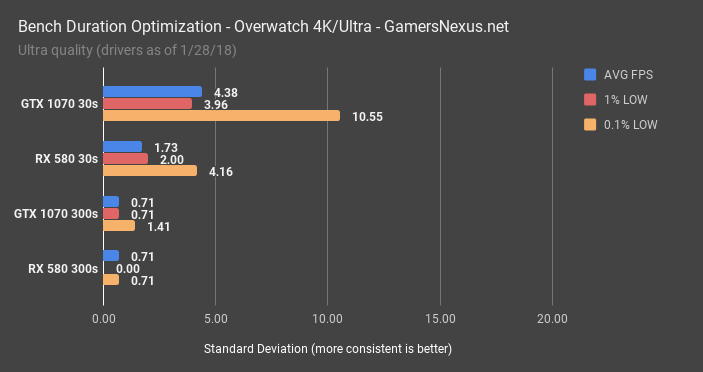 Overwatch is a bit trickier. The reason we run our Overwatch tests for 5 minutes at a time is because of the variability that can exist run-to-run when testing for lower time intervals. Here’s an example of that: Repeatably and consistently, we’re observing larger FPS deviation than typically, a result of the dynamic nature of a multiplayer bot match. With a 5-minute test duration, this deviation is squashed and results become more consistent. 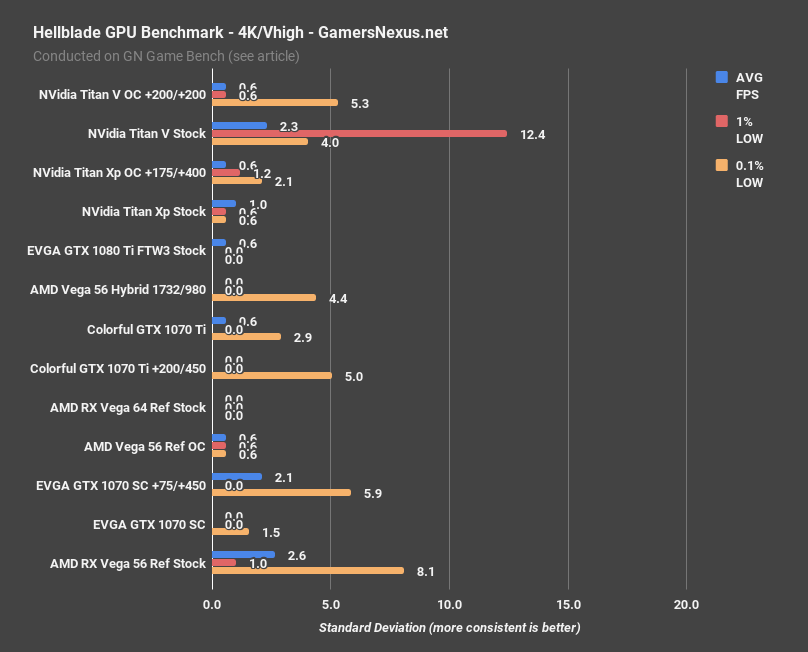 Hellblade is one of the most intensive games we’ve tested in the past year, and also runs on DirectX 11. At 4K and Very High settings, we measured an AVG FPS standard deviation to be moderately variable, ranging from 0 to 2.6FPS. The variance doesn’t appear to be tied to one type of device more than the others. To account for this, we run additional test passes on this particular game.

0.1% lows are highly variable with this game, ranging from a 0FPS standard deviation to an 8FPS deviation. The Titan V is a great example of a card that required multiple additional passes to determine whether the variance was caused by Titan V driver or hardware issues, or by Hellblade performance issues.

We have data for about a dozen other games that we tested in the past year, but we’ll cap it here. Starting with Destiny 2, we began publishing run-to-run deviation in games we test, and will carry this forward for new game launches in 2018. Early last year, we also added margin of error bars to our FPS charts, and will continue with that. The next step is to detail the standard deviation of some of the most common CPU benchmarking tools. We also have some more detailed plans on GPU test detail, but we’ll keep those quiet until ready.