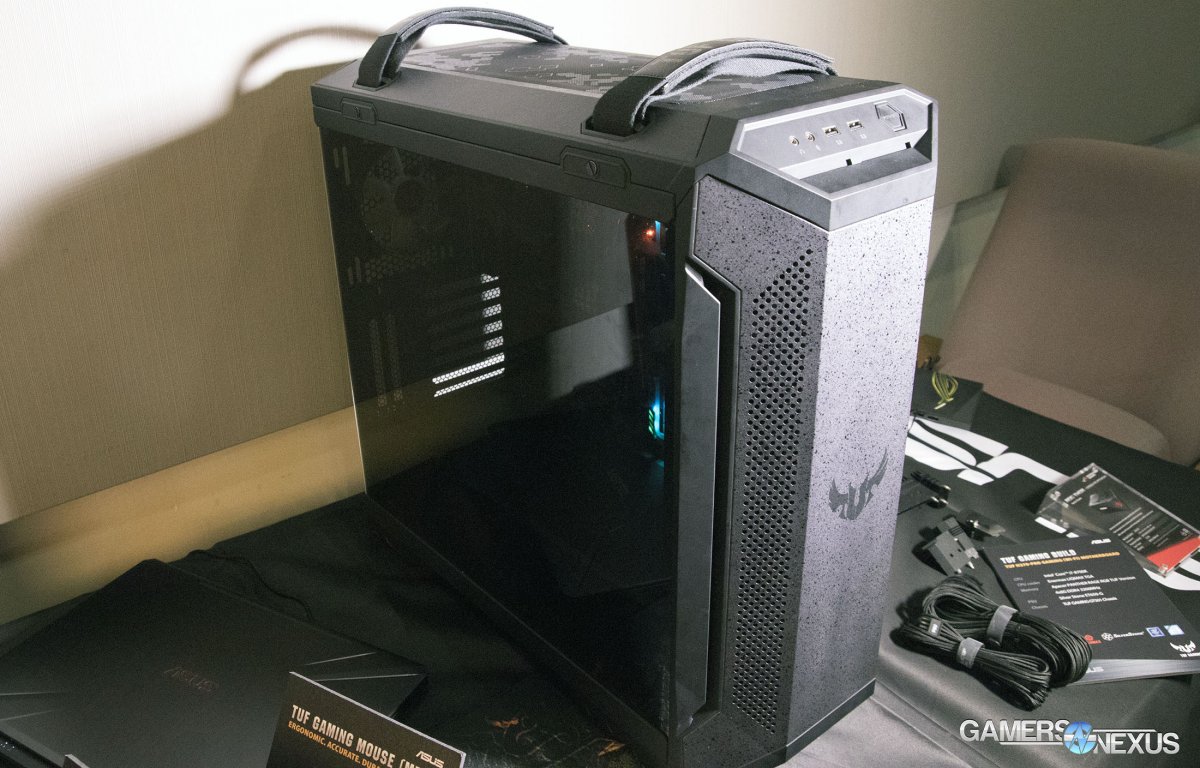 ASUS is up first. ASUS is a big enough company that it seems to think it can do just about anything and see instant success. There may be some truth to that in certain markets, but cases are not particularly forgiving to newcomers. ASUS announced its still-pending ROG Strix case, TUF case, and a mini-ITX case, with the ITX case being the most interesting – but also the most problematic of design. Fortunately, ASUS’ team was extremely receptive to feedback, and we greatly appreciate their desire to make a good product. There is still time for changes.

Let’s go over what needs to change: First off, for the ITX case, the case separates half-way down, which ASUS says is supposed to happen when the system has a thermal requirement to cool-down. The problem with this is that the bottom and top parts are completely compartmentalized, so opening and closing doesn’t actually expose ventilation – the top and bottom chambers are 100% sealed against one another, and when open, they remain sealed. It does not open any ventilation, and therefore cannot physically improve cooling.

Separately, the bottom chamber is isolated for the power supply, which presently houses 2x 120mm intake fans. Upon touching the aluminum side panel, we found it to be warm, which doesn’t make a ton of sense for an intake vent. Upon further inspection, we noticed that there was no exhaust for this bottom chamber – the air was being taken in from the sides and forced to escape out the bottom. The inherent flaw is that cool air goes in, warm air comes out the bottom, and then it immediately gets sucked back in, warmed even further, and recirculated ad infinitum. This creates a runaway thermal effect, which ASUS acknowledged and intends to improve. It’s funny, but that is why prototypes come to the show.

The box also has no intake ventilation for the GPU; we’ve provided feedback that the aluminum support beams at the corners could use a grill, or that the top and bottom of the compartments should be ventilated. Presently, there is no real intake in the box. We thought the design was very interesting, but it does need a lot of work. ASUS has some good ideas here, though.

Finally for ASUS, the company also had an ROG Strix case and a TUF gaming case, both of which have a few critical areas of improvement. ASUS is working with larger case companies to manufacture these, like In Win, but is putting in the design. For the ROG Strix case, we noticed that the fans are far from the front of the case, which will reduce their efficacy and pressure where it counts most. We also noticed that the glass plate is less than a half-inch away from the fans, and that the mesh filter is comprised of at least 50% plastic, which will further hurt airflow. The move to include handles and market for portability and LAN gaming also feels disconnected from this decade, particularly given that the case itself is a full-tower ATX enclosure. That’s more suitable for mATX.

ASUS has some good ideas here, but a lot of work is needed yet. It has to do more than have an ASUS badge to be desirable. We do like that ASUS was extremely receptive to feedback. Enough on ASUS, moving on.

Acer’s booth is next on our list of Most Improvable. The Acer booth was about 80% empty, populated by a few screens, a table, and a computer, and presumably a staff member. We’re not really sure what Acer was doing, but they sure seem to have spent a lot on a space that went woefully unused. In the very least, they successfully got tech media talking about them behind the scenes. 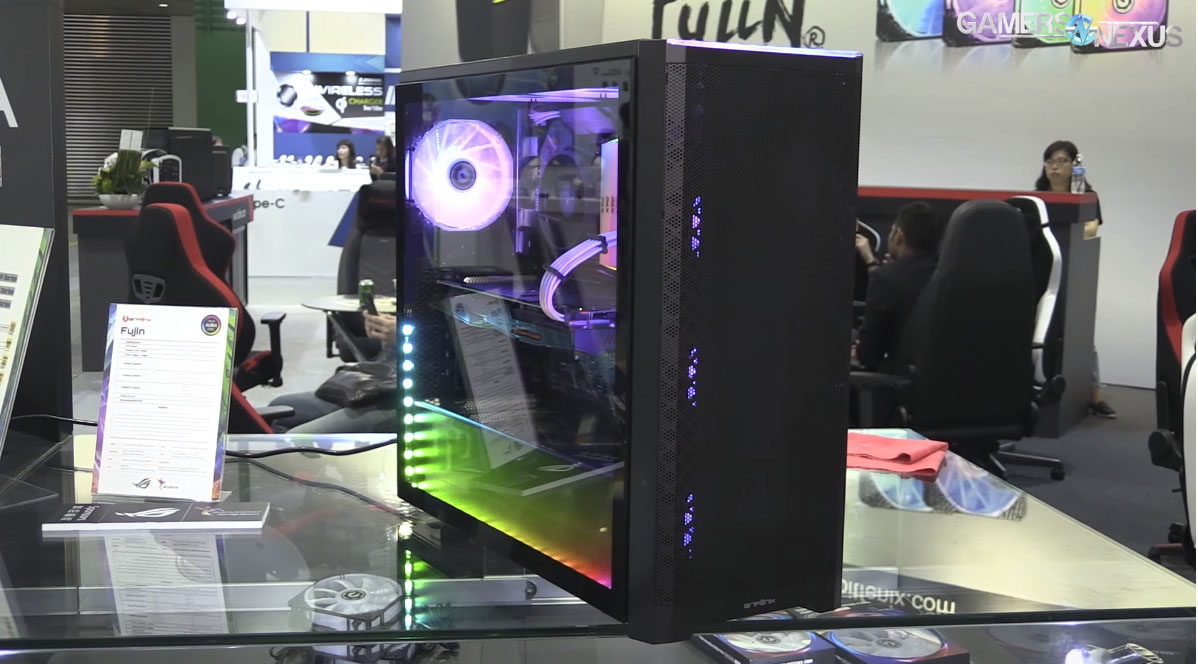 We met with Bitfenix again this year, following the Enso’s launch last year. Bitfenix expressed genuine interest in improving their product and introduced us to the CEO, who took note on avenues of improving their cases. We greatly respect this desire to improve the product.

Bitfenix’s new Fujin case does some odd things. It’s got a mesh front, so it’s going the right direction, but they also stuck a plastic cover behind the mesh. Truthfully, we laughed when we first saw it – we were confused as to the intentions. When asked about why Bitfenix blocked mesh with plastic, they said the intent was to block the RGB LED illumination from the front. There’s a lot of cognitive dissonance here, but basically, Bitfenix wants RGB LED fans in the case, wants mesh, but then is inserting a plastic sheet to block both of them because they’re worried that users won’t like the LEDs. Our argument is that users who don’t like the LEDs will either buy another case or will buy different fans, and that it makes more sense to target one market well, rather than two markets poorly.

The design is actually fine overall; if Bitfenix commits to full mesh, or even full RGB LED, they’ll do just fine. The company just needs to commit to one design. The price target is $80 with 2-3 fans, which would be extremely competitive. It’s just that front panel that needs some work. They’re most the way to an acceptable mid-range product, and Bitfenix still has time to fix that panel. 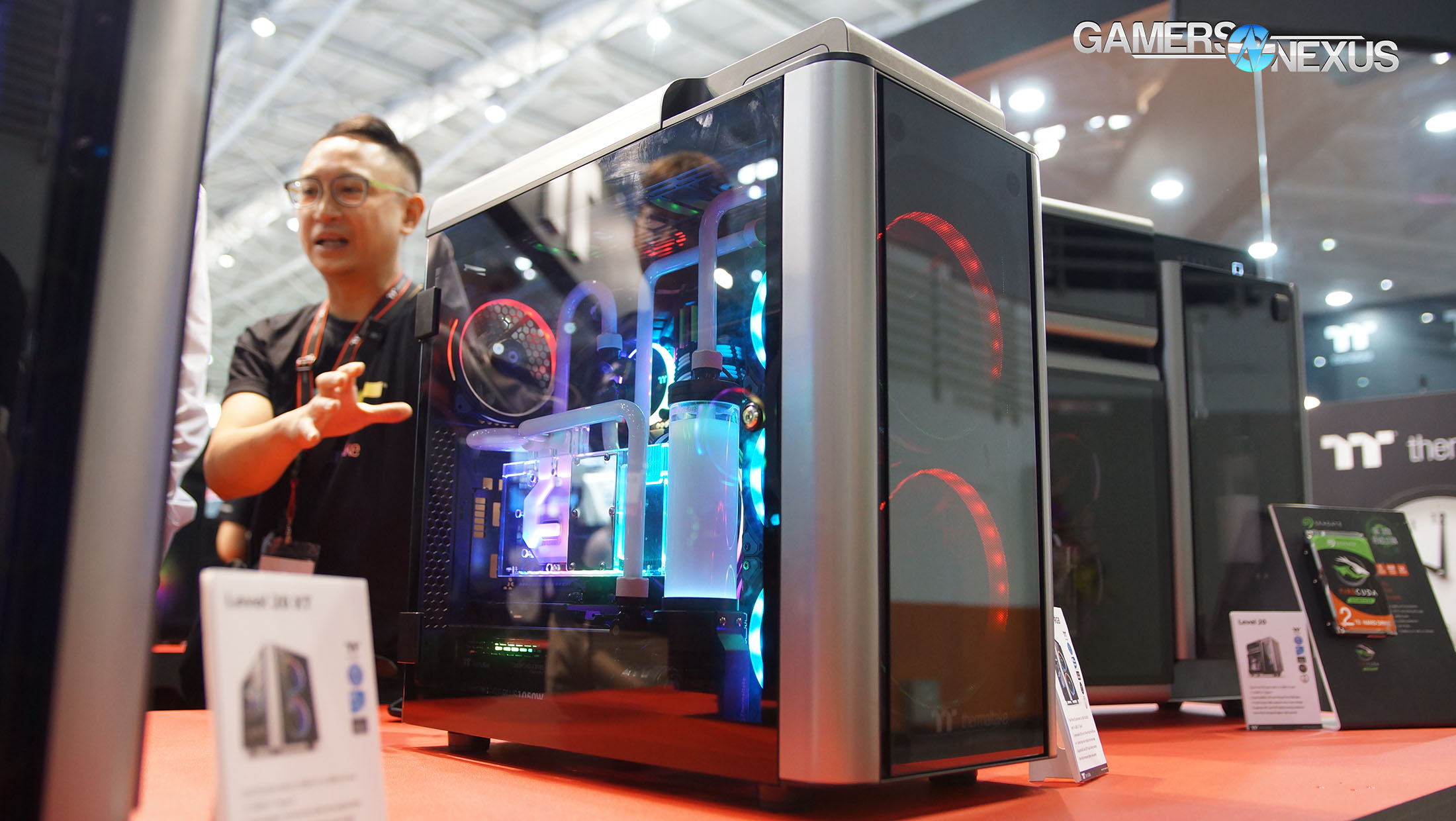 Thermaltake is next on the list. Thermaltake had some good initiatives with the Level 20 series. We think it’s a good way to bring an expensive line down to the consumer market, and it’s basically the perfect implementation of a halo product. Thermaltake also did well to add a rotatable PCIe expansion bracket, allowing vertical GPUs that sit further back.

We also think the company has room to improve its cases. The glass should be cut back as much as possible on the sides, or potentially further distanced from the side panels of the case. This would allow for better airflow. An extra few millimeters of distance from the corner plates would aid significantly in this department. Thermaltake also has room to improve the left and right side panels, which are presently asymmetrical and don’t match one another, although are both made of tempered glass. We do like the modularity of the micro-ATX case, and the price point is extremely competitive at $100, but the ATX cases could use a bit more tuning. Thermaltake is also on the list of vendors that have been receptive to feedback, and we’ve seen the company iterate its design in big ways as it works toward building a stronger reputation. 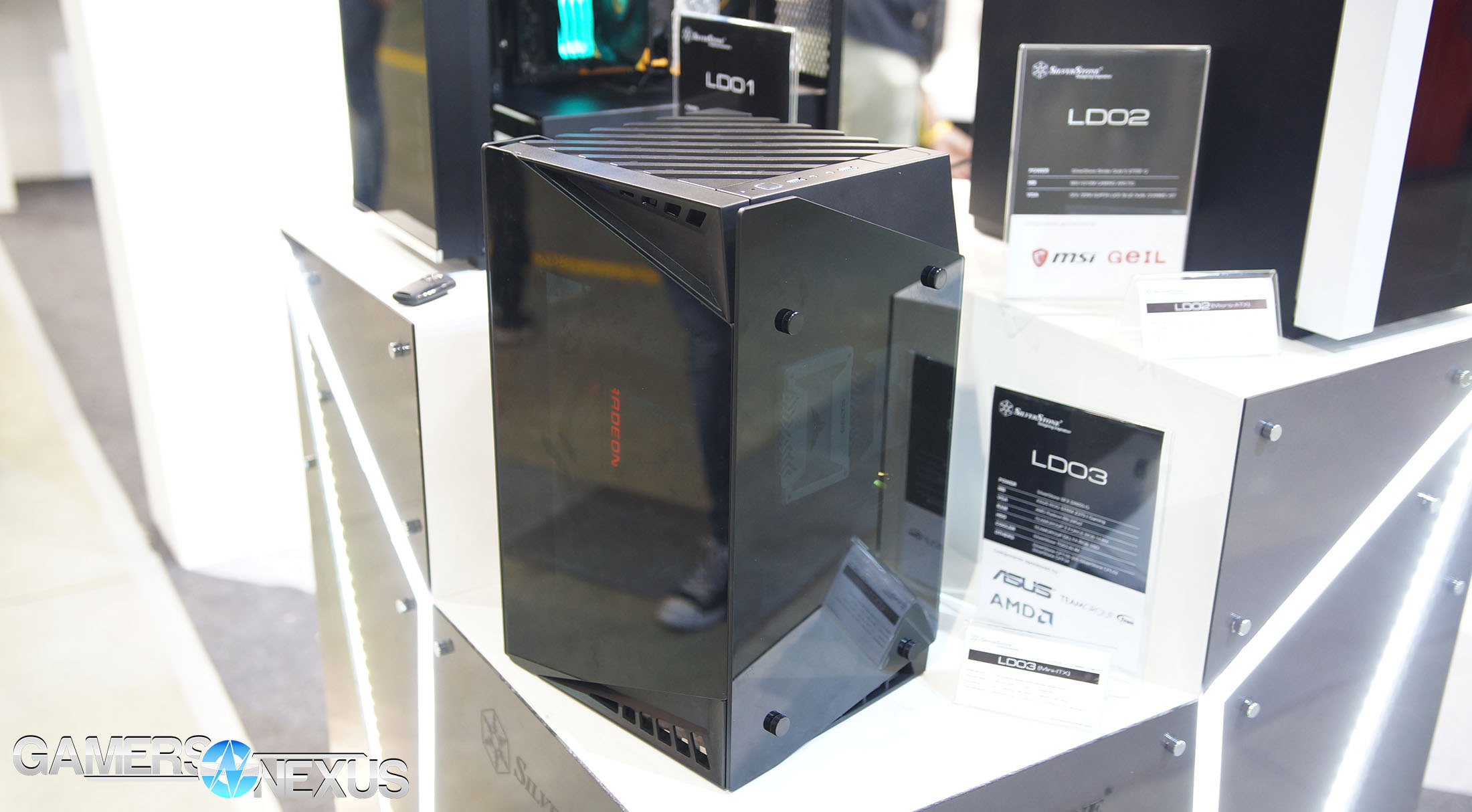 SilverStone is next on the list. SilverStone has struggled to make change in the new industry of glass and lights. The company has always focused on function and build quality, but suddenly has been trying to compete in the looks department. Although SilverStone had several cases that looked well-designed and well-made for the show, we found the new LD03 ITX mini-tower to be the most perplexing. It’s a good look, but detours far from SilverStone’s core design philosophies of function. The case has no direct GPU intake or ventilation, evidenced by the usage of a liquid-cooled card in the show build, and relies on bottom intake that’s largely blocked-off by the side panels. We’d like to see SilverStone introduce some of their core design philosophies back into this case, like spacing it further from the floor or adding in more grills in the plastic. Ideally, the company also nudges the fan over to give the GPU direct intake cooling paths.

Intel is last on the list. Intel’s 28-core CPU shouldn’t have been shown in the state that it was. The CPU is impressive enough on its own that it’ll turn heads once it’s ready, but it simply wasn’t. This was a rushed attempt to distract from Threadripper. We think the 28C part will be fun from an enthusiast standpoint, and we look forward to it, but it simply wasn’t ready. Intel hasn’t had to compete with anyone for a long time, and we think that the company’s most improvable attribute is that of re-learning to compete with a legitimate contender.

We have an awards show coming up soon, so stay tuned for that!