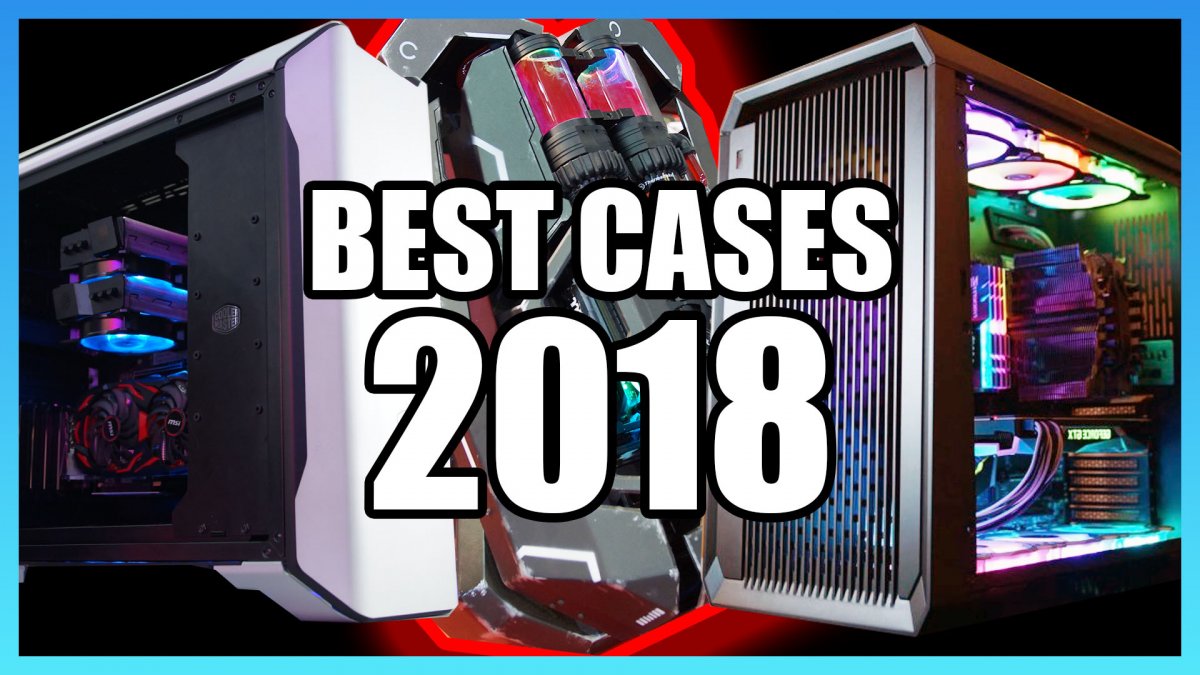 After seeing dozens of cases at Computex 2018, we’ve now rounded-up what we think are the best cases from the show, with the most interesting design elements, price points, or innovations. As always, wait until we can review these cases before getting too hyped and pre-ordering, but we wanted to at least point-out the top cases to pay attention to for the next year.

Our best cases round-up starts with the finalized version of Lian Li’s O11 Air, which we originally saw at CES 2018. The Air uses the same tooling as the O11 Dynamic, a case co-designed by Der8auer and Lian Li. The O11 Air is the one we’ve always been most interested in, as it aims to include 3 fans for a $130 version, or 6 fans for a $150-$160 price-point.

The O11 Air is a highly competitive enclosure at its targeted price-point, and has unique features like dual-PSU support – or swappable HDD cages, if you prefer – and a compartmentalized layout. We found the original O11 Dynamic to be easy to build in, of good proportions, and of excellent performance tuning potential given the various fan mount locations. The Air will allow fan mounts on the side wall, the front, the top, and the bottom. Lian Li is going for high build quality and high ventilation and airflow with its grilled design, and we’re interested to review this one as soon as it’s in. We found the O11 Air to be the best-in-show case for Computex 2018. 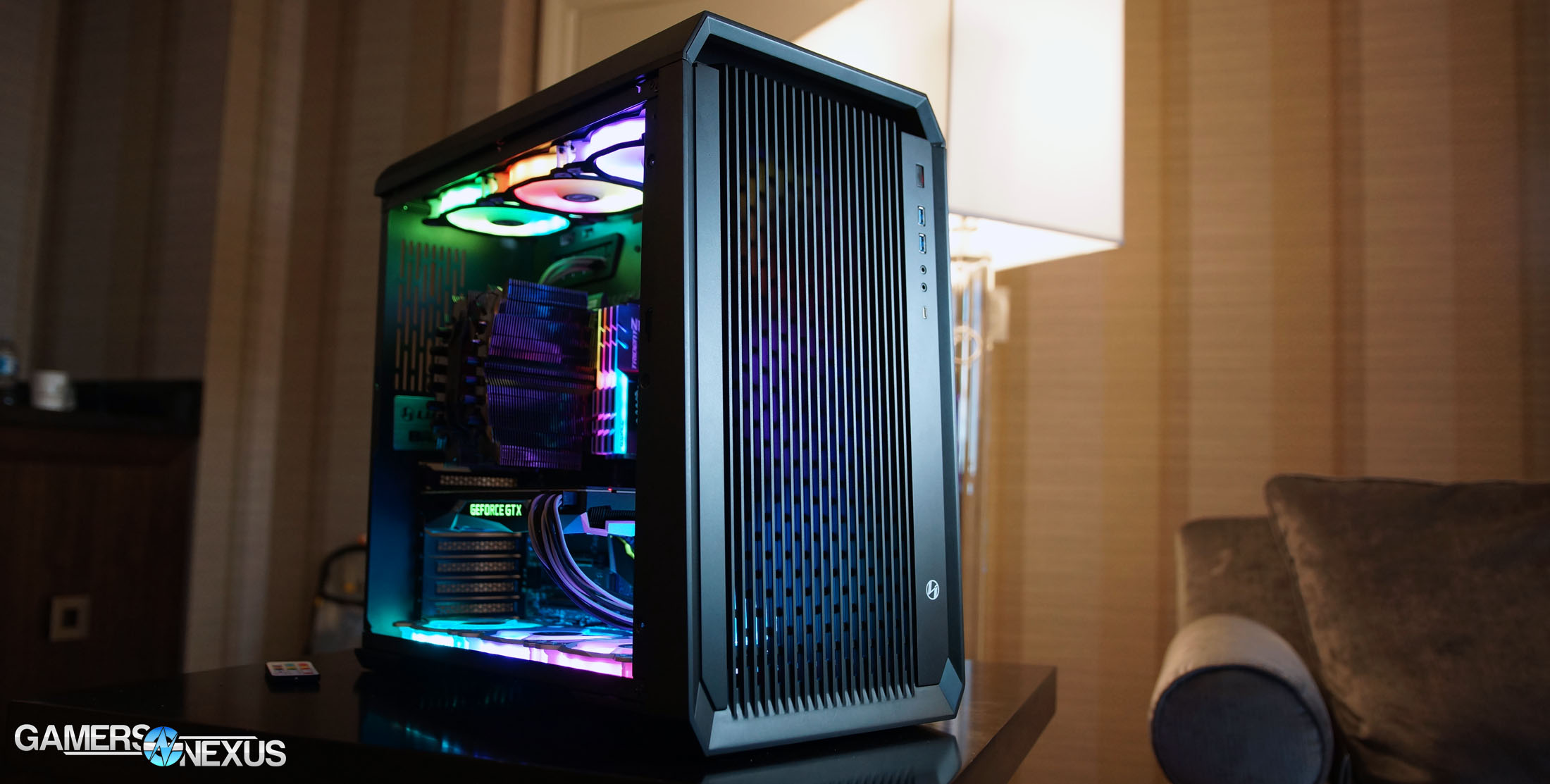 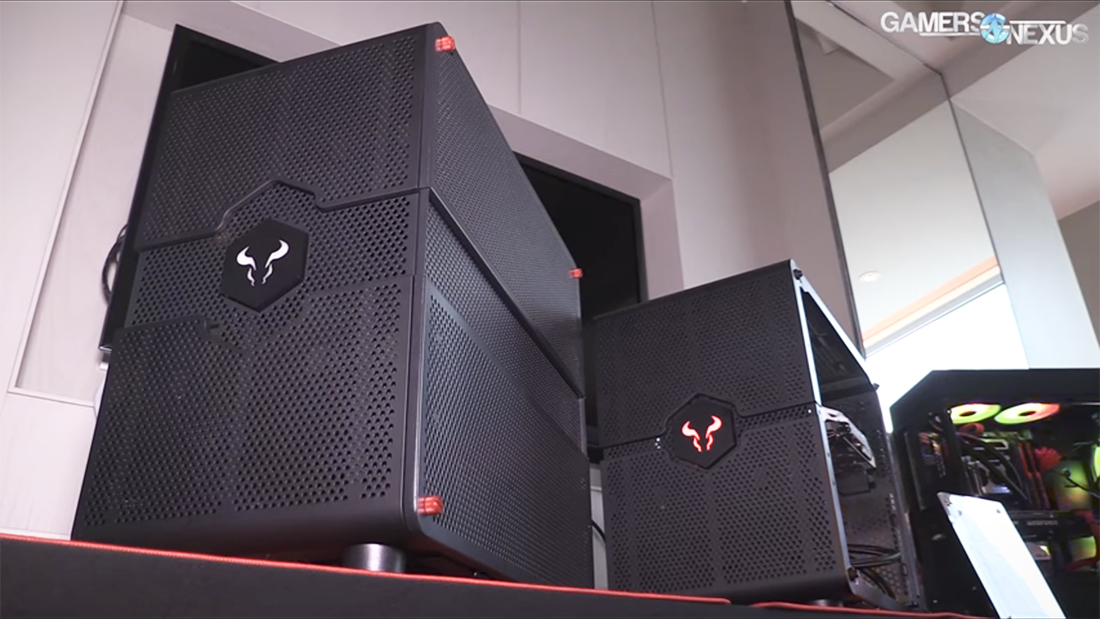 Riotoro’s Morpheus case aims to make a “resizeable” case, which it claims will allow a single case with semi-modularity for deployment in micro-ATX, ATX, and EATX systems. The enclosure isn’t finished yet and Riotoro, comprised mostly of former Corsair employees, s looking for audience feedback. Presently, the case can fit EATX at max height and micro-ATX or ATX at the minimum height. The motherboard installed in inverted layout, fan count is looking like one included RGB fan with the potential for an 80mm fan, though we don’t encourage this particular decision. The case can fit 280mm radiators in the front or bottom, and can fit just an 80mm fan in the rear. Riotoro is also considering 200mm front fan support, which should be achievable as the tooling is all custom. The case uses interlocking front, back, and side panels for its resizable feature. The locking mechanisms are still being finalized, but the panels should slide on rails to achieve the desired height. Release is looking like Q4.

Cooler Master had a few cases to show this year, as we illustrated in another video on the channel, but we thought the H500 was the most interesting for its market positioning. The case will ship with mesh as the default configuration, and will bring down a smaller version of the H500P Mesh – a case that we highly praised – to the $100 price-point. For a $50 price-cut, this is an excellent way to offer more budget-minded builders a similar case to the flagship H500P Mesh. It’s still shipping with two 200mm RGB fans, a mesh front, and will be slightly downsized with a few features removed. Given the price drop, we think this is worth keeping an eye on for future reviews.

As an honorable mention, Cooler Master also had an SL600M on show. This one will get some design revisions that will improve the top panel exhaust cover, namely by offering a slightly raised position for better exhaust ventilation. Users can also remove the panel to expose mesh. If you’re wondering why the front panel is closed, it’s because the bottom has substantial distance from the ground and 2x 200mm bottom intake fans. It’s a call-back to the RV02, in some ways. The case also has a silence focus, hence its blocked front and back panels. More on this one later. 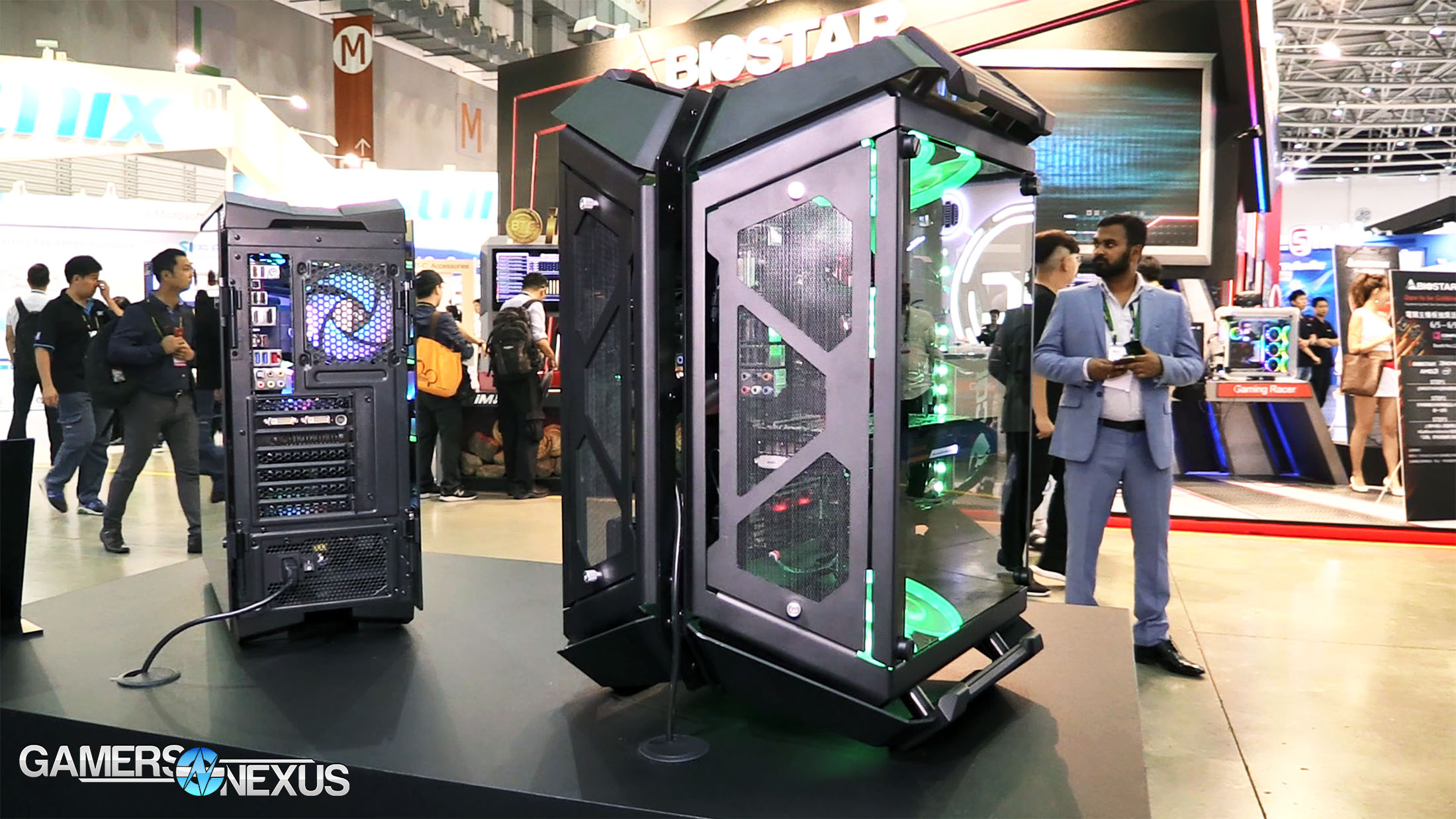 Cougar’s Gemini X case was the most interesting showing from the company, the case fits two simultaneous systems – one mini-ITX and one full ATX – and can be laid on its side or positioned upright. Dual-system cases are always interesting, if less practical, and we think the Gemini X at least deserves to be noticed.

There will be no included fans with the Gemini X, relying instead on users to provide their own, and radiator support goes up to 240mm at the top and bottom on the ATX side. Airflow is oriented top-to-bottom, with paneling featuring 4mm thick aluminum and 5mm thick glass. As for price, it’ll be $900 and available in Q3 or Q4. 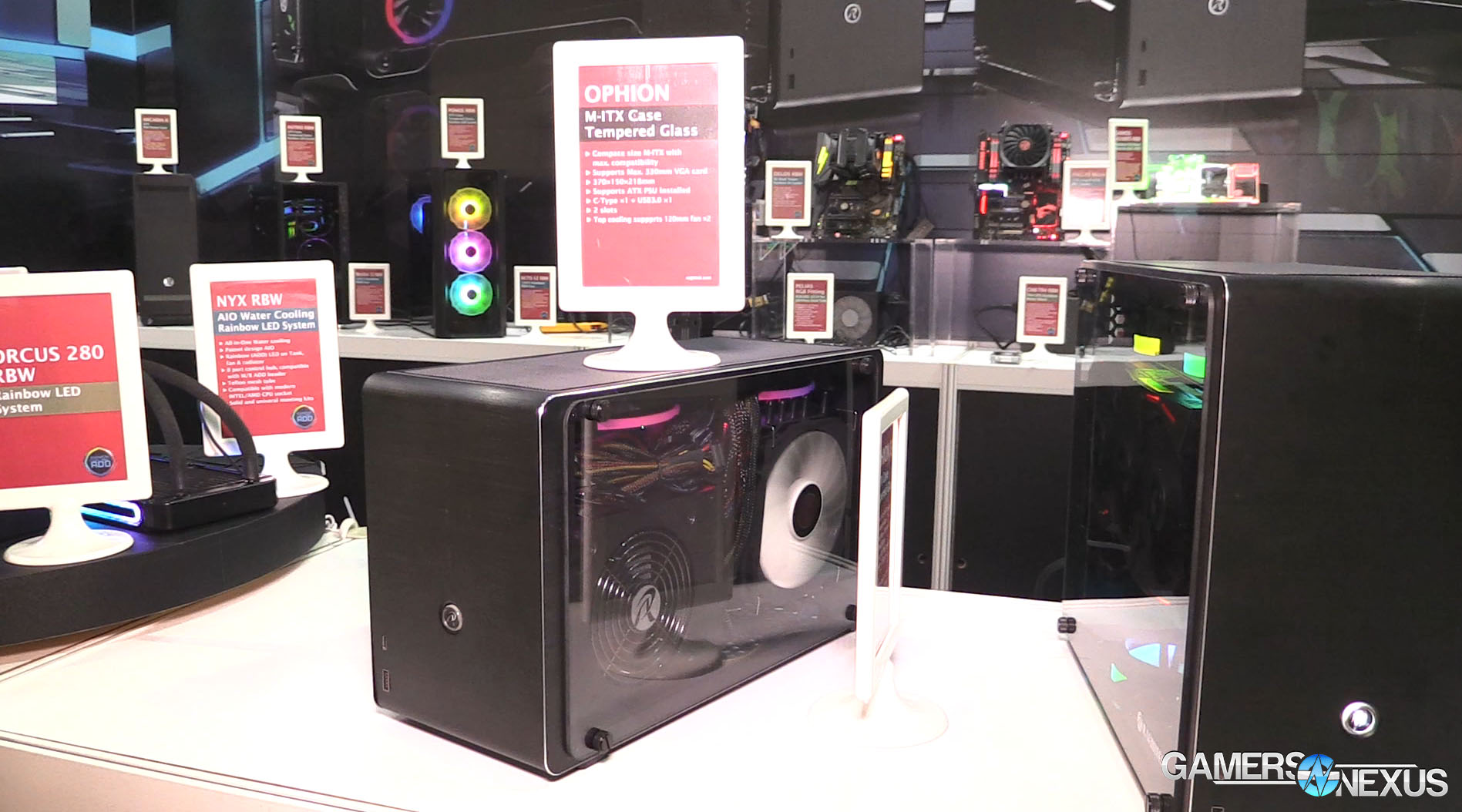 Raijintek also had a few interesting enclosures, but we thought the Raijintek Ophion and Ophion Evo MITX cases were the most noteworthy. The Ophion will ship at $100, or $200 for the Evo version, and will be made of custom tooling with perforated finishes on the side panels. Ventilation looks potentially decent on these, as the tempered glass panels were only for show.

Raijintek also had a massive case on display, capable of fitting 4 to 5 480mm radiators, depending on final concept. This is the Enyo case, an EATX goliath that is less practical than any other on this list thus far, but is interesting. 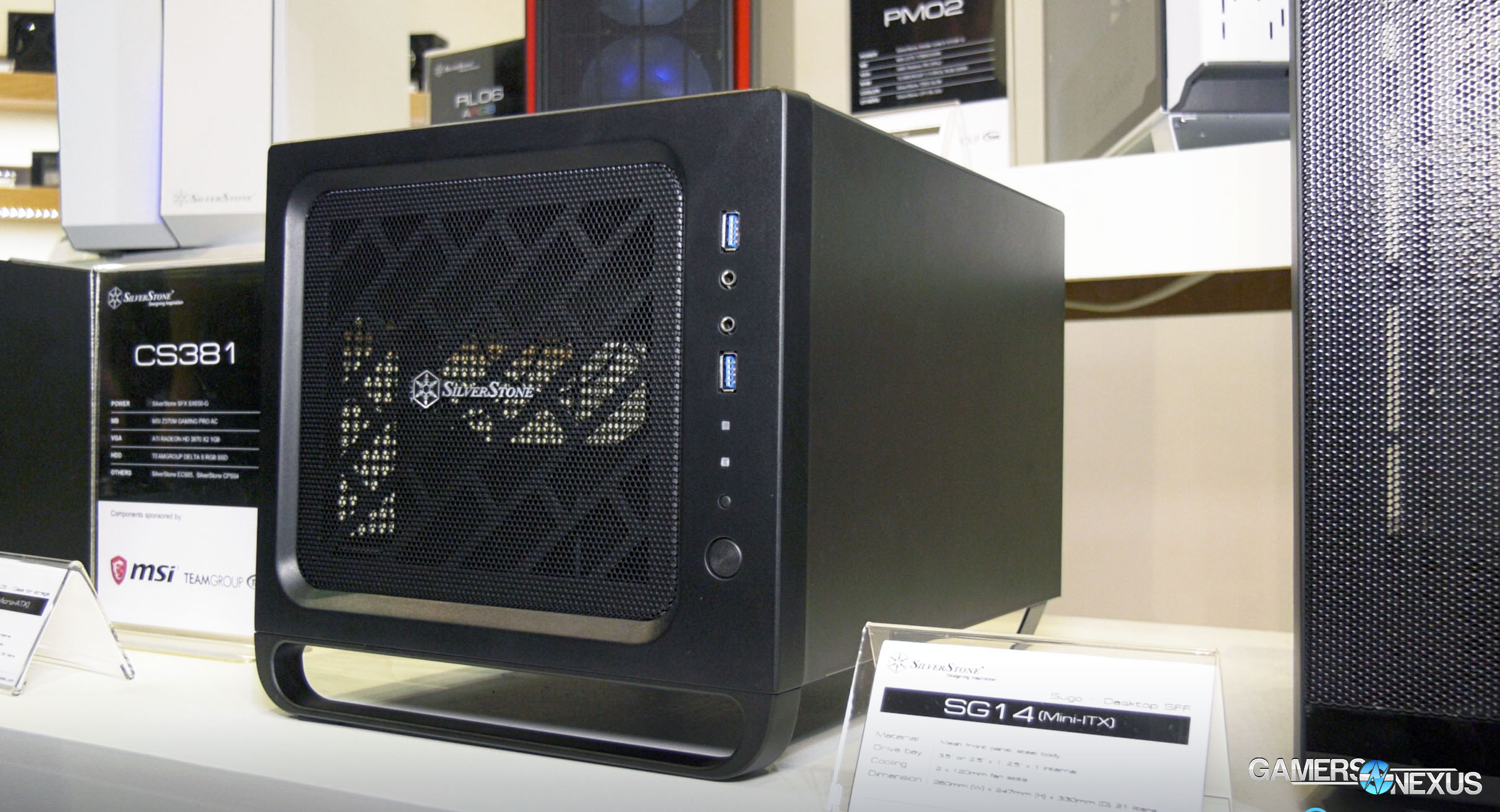 SilverStone’s SG14 might sound like a familiar case. The company attempted to launch this years ago, but never managed to bring it to market. Since then, SilverStone has completely refactored the case, to the point of even flipping it to serve as the LD03 mini-ITX mini-tower that we recently looked at. The SG14 is small, ultra lightweight, and will target a $30 to $40 price-point. The case leans on mesh for airflow, and remains true to the small form factor formats. As a budget option, the SG14 looks promising for a small, portable home-theater PC build, and its thermals should perform reasonably provided the user installs a decent cooling solution.

We also wanted to point-out the CS381 by SilverStone. This one isn’t a traditional case, but we’re hoping to use it in one of our own upcoming server builds. The CS381 is a 10-bay mini-server enclosure, capable of fitting micro-ATX motherboards for specialized use cases. For our own, we’d like to populate the box with drives and equip a Threadripper or i9 CPU for in-box video compression. Dual 120mm fans are supported as side intake, but could be sacrificed instead for two more 3.5” drives. It’s a small, efficient NAS replacement. This would allow us to host more drives than most NAS enclosures, plus enable 10GbE via the user’s motherboard or AICs. 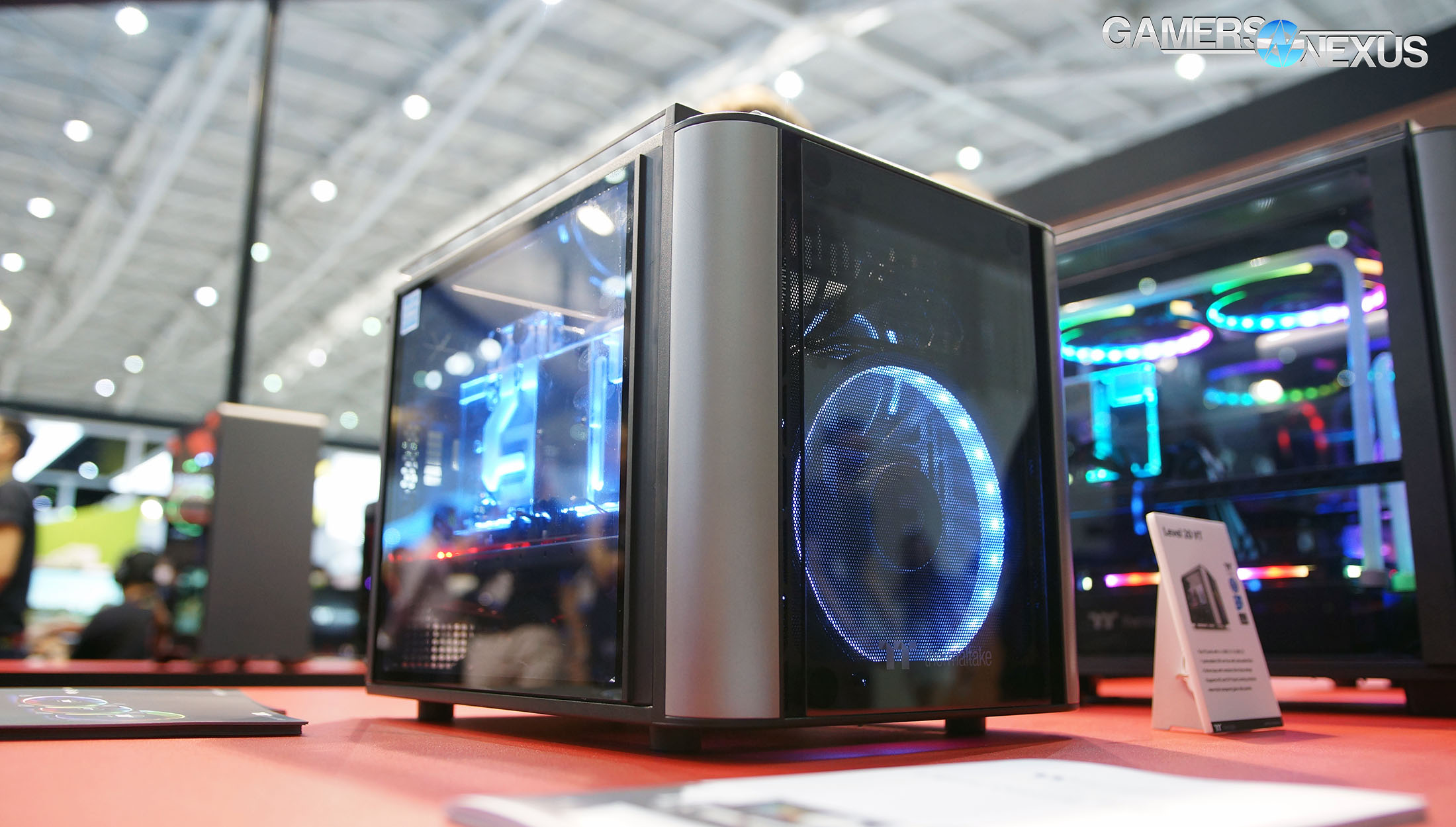 Thermaltake’s Level 20 series has been reimagined for lower-end cases, pulling the halo product’s visuals into more affordable price classes. Of the three new Level 20 enclosures shown, we were most interested in the Level 20 VT. The case is more looks-focused than function-focused, as we discussed in another video, but it does a good job of bringing down a high-end look to the $100 price-point. The Level 20 VT shows a renewed focus by the industry on accommodating mATX users, and offers a case that prioritizes looks. Provided the user relies upon liquid cooling, we think this box deserves a spot on the list for serving a different market of an already under-served audience.

Check back as the cases launch for our full reviews.