We recently revisited the AMD R9 290X from October of 2013, and now it’s time to look back at the GTX 780 Ti from November of 2013. The 780 Ti shipped for $700 MSRP and landed as NVIDIA’s flagship against AMD’s freshly-launched flagship. It was a different era: Memory capacity was limited to 3GB on the 780 Ti, memory frequency was a blazing 7Gbps, and core clock was 875MHz stock or 928MHz boost, using the old Boost 2.0 algorithm that kept a fixed clock in gaming. Overclocking was also more extensible, giving us a bigger upward punch than modern NVIDIA overclocking might permit. Our overclocks on the 780 Ti reference (with fan set to 93%) allowed it to exceed expected performance of the average partner model board, so we have a fairly full range of performance on the 780 Ti.

NVIDIA’s architecture has undergone significant changes since Kepler and the 780 Ti, one of which has been a change in CUDA core efficiency. When NVIDIA moved from Kepler to Maxwell, there was nearly a 40% efficiency gain when CUDA cores are processing input. A 1:1 Maxwell versus Kepler comparison, were such a thing possible, would position Maxwell as superior in efficiency and performance-per-watt, if not just outright performance. It is no surprise then that the 780 Ti’s 2880 CUDA cores, although high even by today’s standards (an RTX 2060 has 1920, but outperforms the 780 Ti), will underperform when compared to modern architectures. This is amplified by significant memory changes, capacity being the most notable, where the GTX 780 Ti’s standard configuration was limited to 3GB and ~7Gbps GDDR5.

Rather than our usual starting point of Sniper Elite 4 or Apex Legends, we’ll instead start with GTA V. This is a 2015 launch, so it’s closer to the 780 Ti’s 2013 launch than our other test titles. At 1080p and with Very High and Ultra settings with 2xMSAA, the 780 Ti still pulls its weight at 68FPS AVG, with lows surprisingly well-spaced at 50FPS and 41FPS 1% and 0.1%. The 780 Ti therefore ends up just behind the 290X, with both of these being reference cards with stock settings. The modern GTX 1060 6GB Gaming X runs at 83FPS AVG, outpacing the former flagship 780 Ti by an impressive 22%. The 980 Ti – remember, there was no 800 series – ended up 47% ahead of the 780 Ti and was its direct successor. Generationally, the 1080 Ti also ends up about 126% ahead, or over 2x higher in performance. It’s sort of silly to use percentages, at this point, so the take-away is that 153FPS AVG on the 1080 Ti allows graduation to significantly higher graphics settings and resolutions. 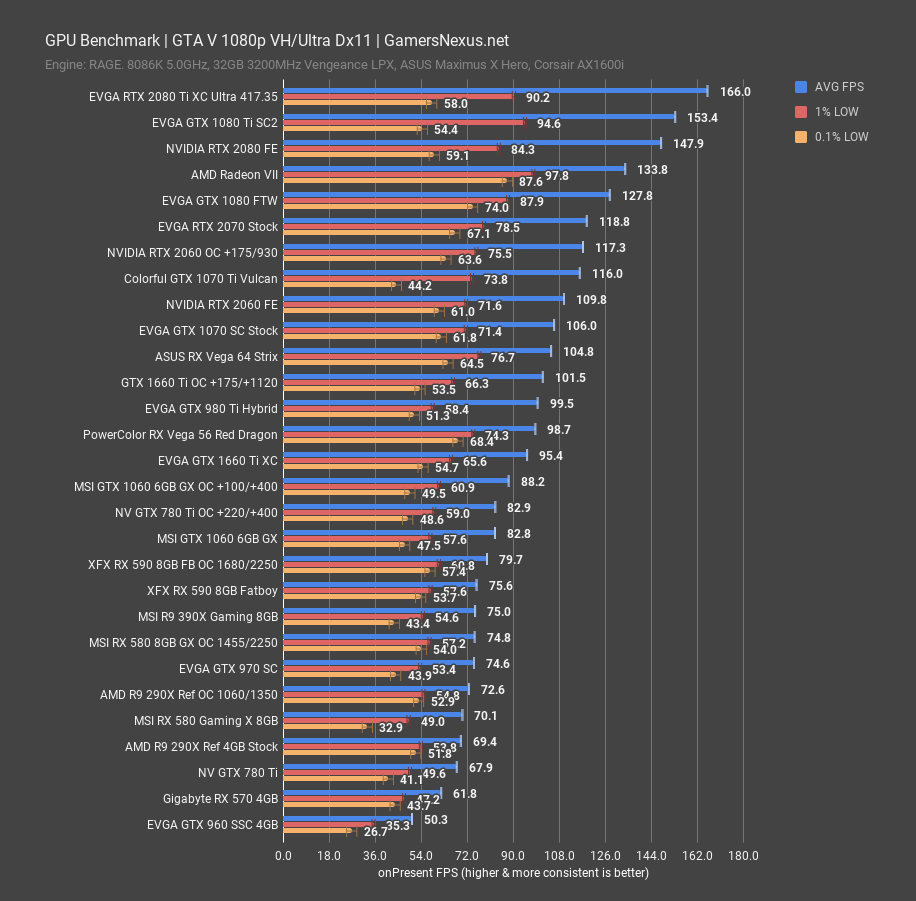 Overclocking is completely insane on the 780 Ti. It’s fun, honestly, and that makes us miss the older NVIDIA designs that were less locked-down. With a 220MHz core offset and 400MHz memory offset, we ended up at 83FPS AVG, which is a massive 22% improvement over the stock 68FPS AVG performance. This would be higher than the factory overclocked partner model 780 Tis, so you get a full representation of the range. Overclocking gives us more direct voltage control and clock control than modern generations, resulting in performance that matches the GTX 1060 6GB nearly identically. The R9 290X overclocked to about 73FPS AVG, allowing the 780 Ti to take a lead once pushed. Of course, a partner model 290X would theoretically be able to push a bit further, but then so would a partner 780 Ti. 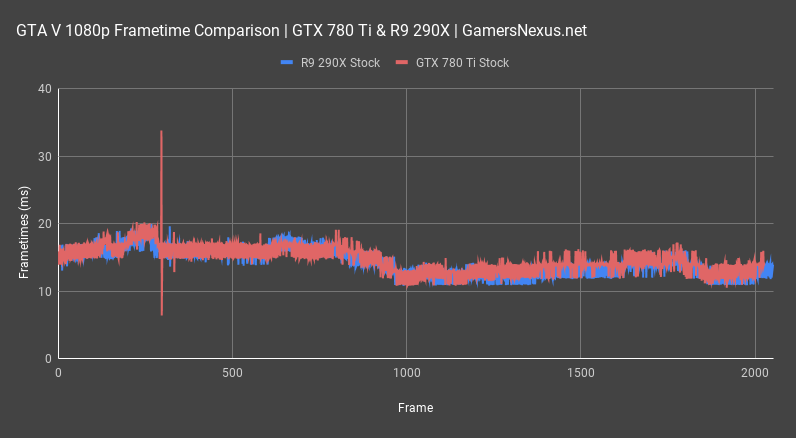 The GTX 780 Ti also does well, ending up functionally tied with the 290X. It almost completely obscures the 290X line, overall, and has mostly equal performance for the actual player. There is one spike up to 33ms and then a corrective spike down, but beyond this instance, the rest is about the same between the two cards. 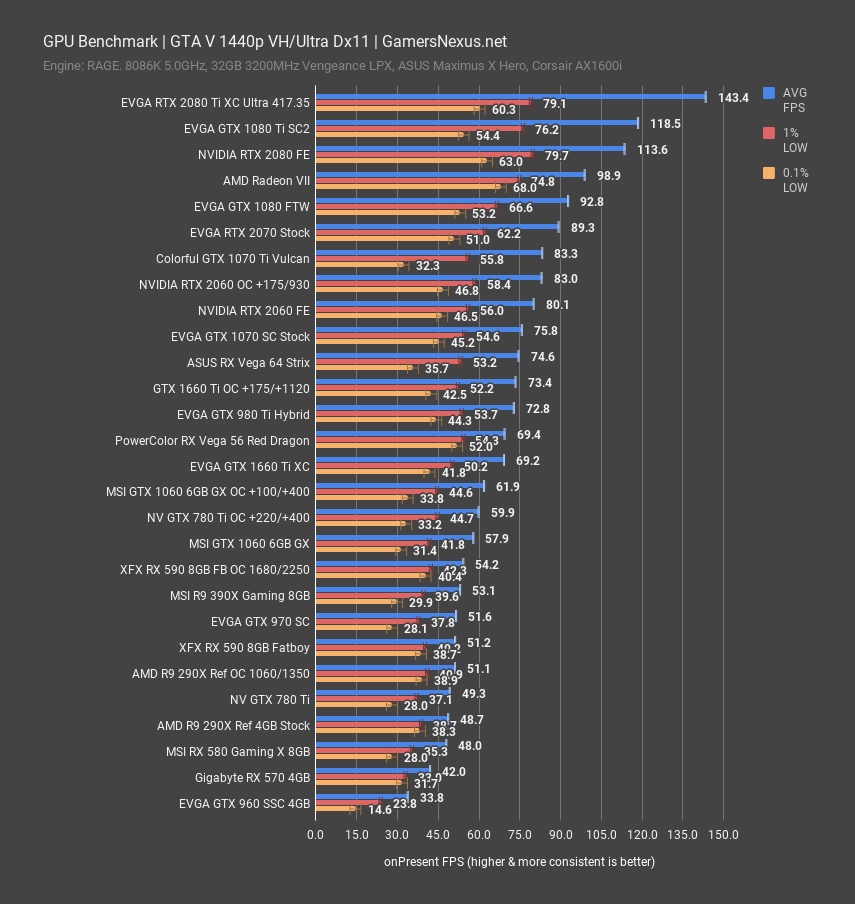 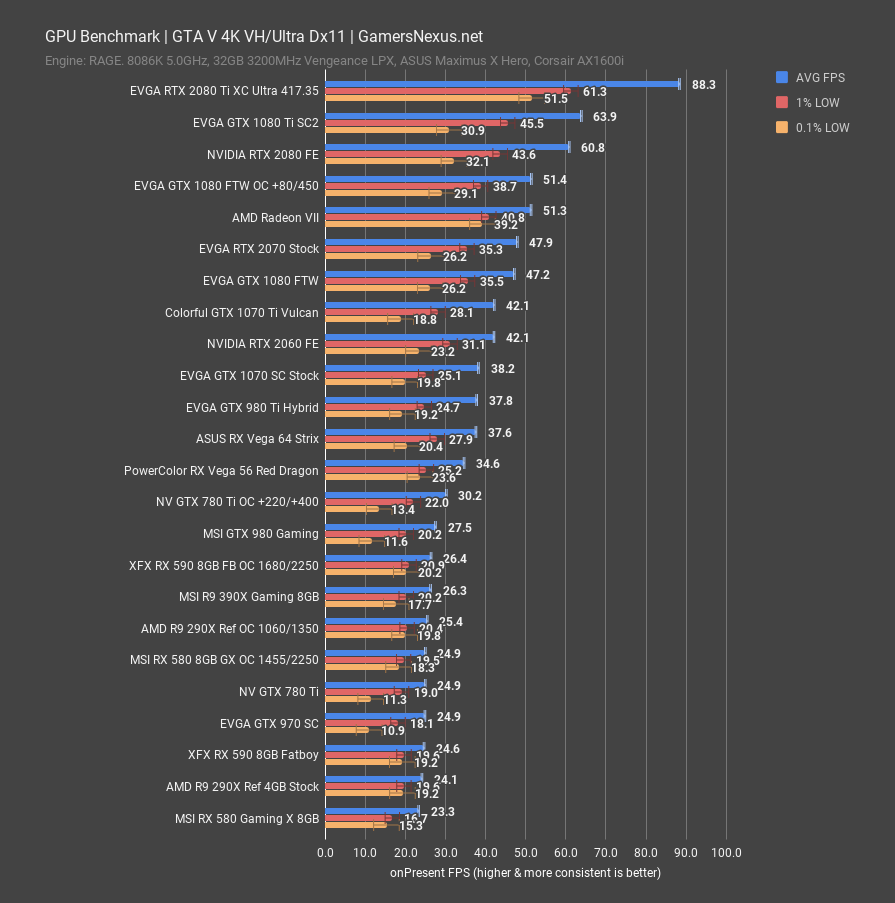 4K wasn’t even remotely common in 2013. This was far from the reaches of gaming GPUs at the time, as illustrated with the 780 Ti’s 25FPS AVG at 4K. This is the sort of test that people would likely have scoffed at as synthetic, but today, even though the former flagship 780 Ti and R9 290X are roughly tied in their inability to play, it still takes a modern $500 card to reasonably begin playing with these settings. The RTX 2070 at $500 could absolutely be made to work with settings reductions, although that may be undesirable. Overclocking the 780 Ti gets it to 30FPS, which is clearly still not enough, particularly when considering frametime performance is sporadic and places us at 13FPS 0.1% lows, translating to frametime spikes upwards of 90ms. That means that, sometimes, you don’t get a new frame for a full 10th of a second. 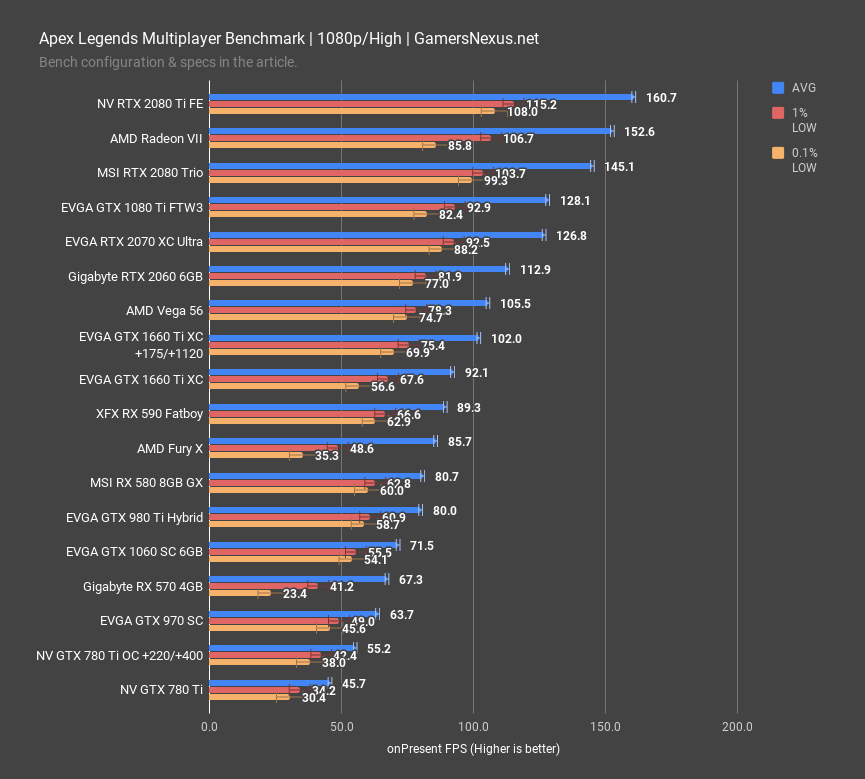 Apex Legends is up next. We don’t have as many cards tested here since we only just recently added it, but the test gives a look at one of the most popular, modern games that has come across our bench. Apex Legends uses the Source 2 engine and DirectX 11, building on top of the platform that Titanfall 2 laid-out for it. This one omits the 290X because it was previously tested, but we’ll show plenty of 290X numbers following Apex Legends.

At 1080p, the GTX 780 Ti stock card runs high settings with a 46FPS AVG, allowing the GTX 970 SC a lead of 40% over the 780 Ti. Overclocking the 780 Ti does allow it to gain an impressive 21% performance over its baseline stock performance, although this still isn’t enough to top the 970. If you’re looking to jump to another flagship, the 980 Ti Hybrid operates at 80FPS AVG stock, which is about a 75% increase over the stock 780 Ti. The 1080 Ti is a couple times higher in performance and is capable of 4K, whereas the 780 Ti would struggle even with 1440p in this title. 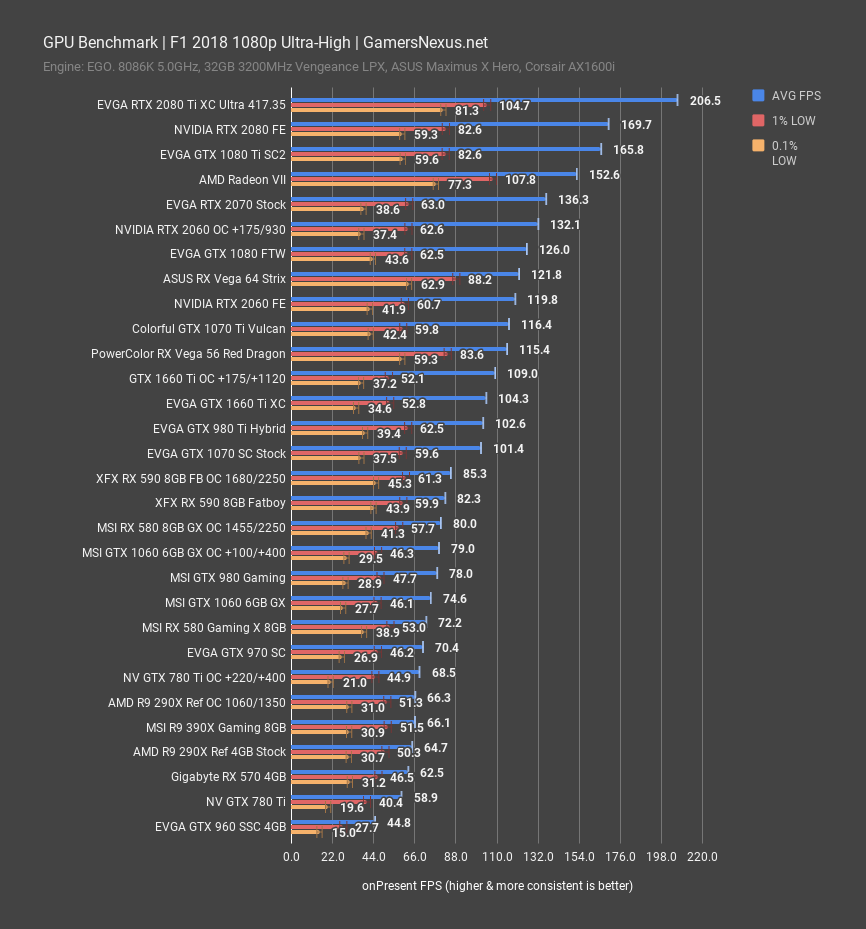 F1 2018 uses the EGO engine and offers a good look at other racing games made by CodeMasters, as they all run on roughly the same engine. F1 2018 also has some interesting quirks, like its desire for higher performance system memory, although that’s irrelevant where we control for non-GPU variables.

At 1080p, the 780 Ti ends up at 59FPS with Ultra-High settings. That’s pretty good for a card this old and considering that quality can be dropped to maintain higher FPS. Frametimes are rough in this game in general, although not for Vega, but average FPS plants the 780 Ti as below the 290X’s 65FPS AVG. The 290X also maintains better frametime consistency in this test path. Overclocking the 780 Ti propels it to nearing 70FPS AVG, approaching the GTX 970’s performance. That’s not particularly compelling performance when considering the tremendous step-down that the 970 is from a flagship. Overclocking the 290X lands it at about 390X levels, unsurprisingly. 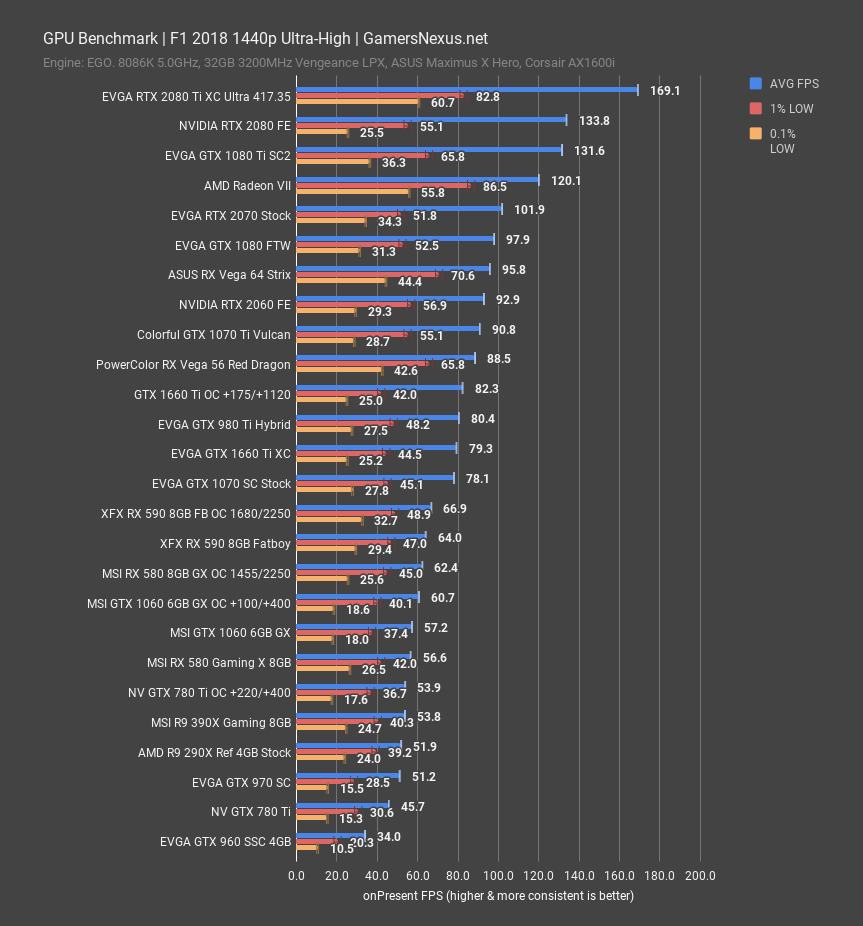 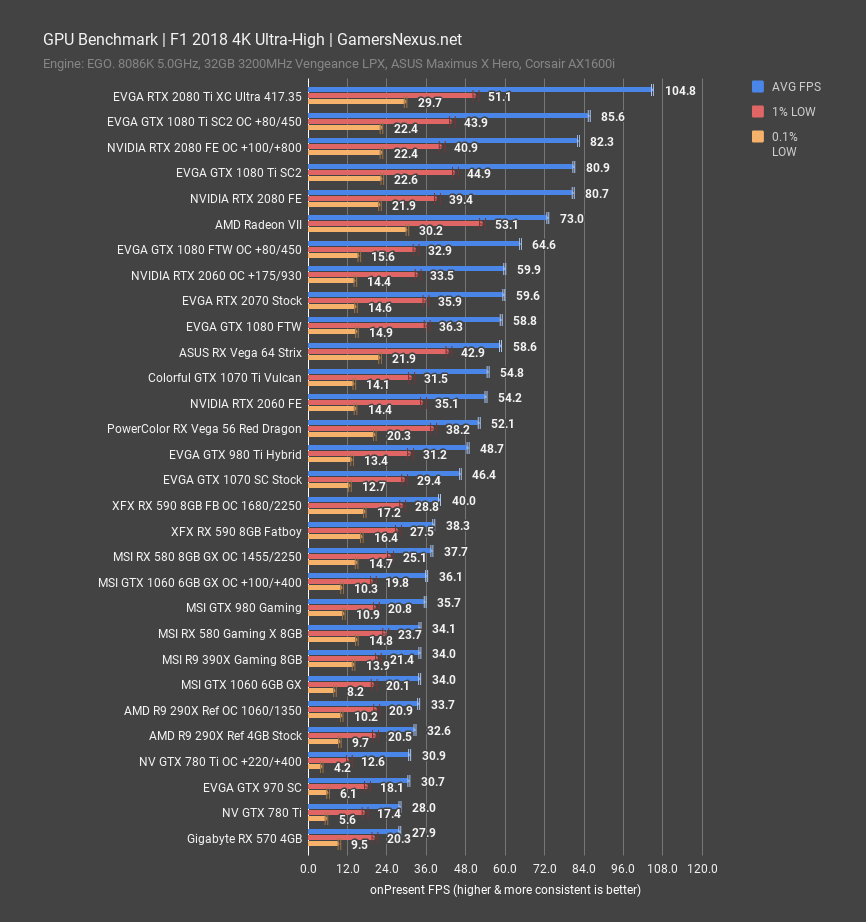 4K has the 780 Ti at 28FPS AVG, with an overclock barely improving framerate. Frametime performance is dismal here, making this game unplayable with these settings. The 290X also struggles, although not to the extent of the 780 Ti. AMD tends to do better in this title versus its mean performance in other titles. 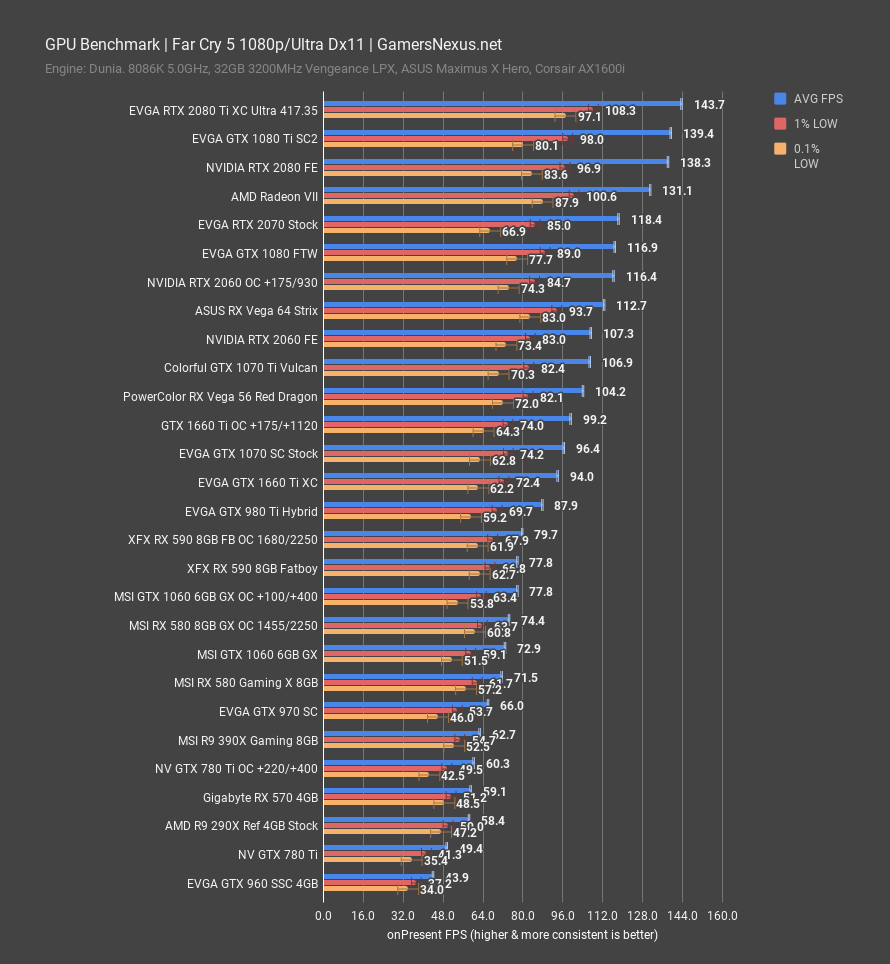 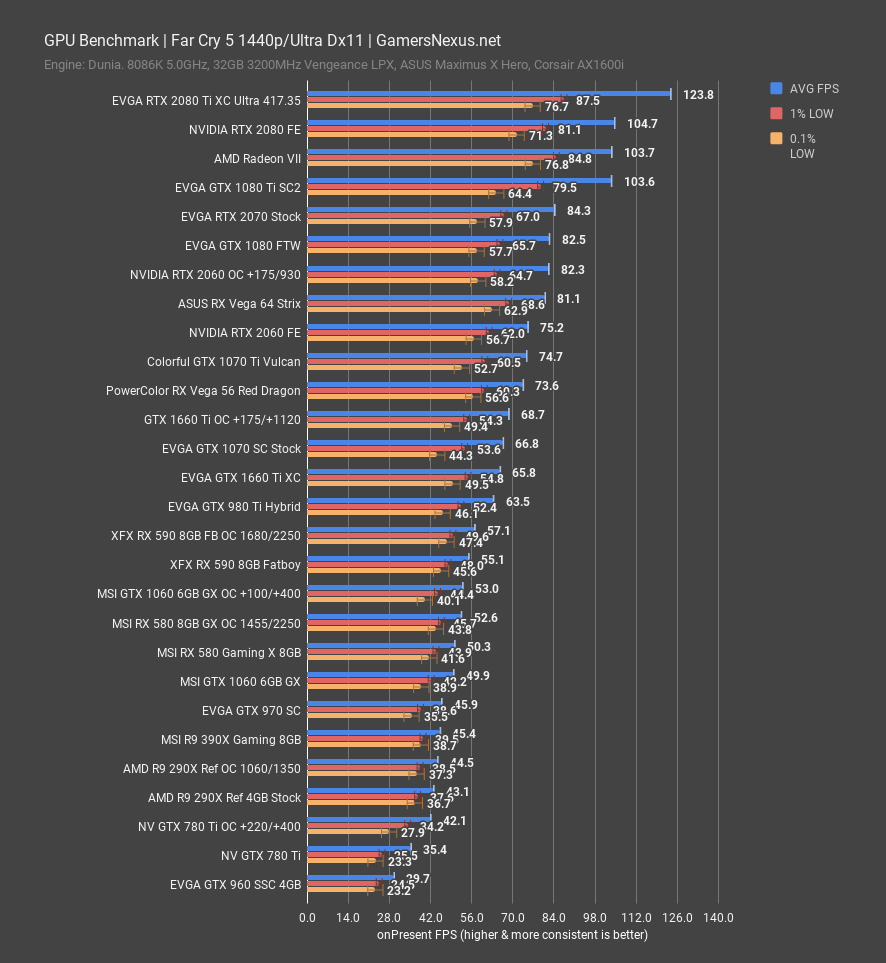 At 1440p, performance falls to 35FPS AVG, allowing the 290X a lead of 22% stock. That said, overclocking the 780 Ti ties it up to the 290X stock and gets it close to overclocked 290X performance, although the 290X maintains a lead. The 980 Ti can play this game reasonably well at 1440p, whereas the 780 Ti struggles without a graphics quality reduction. 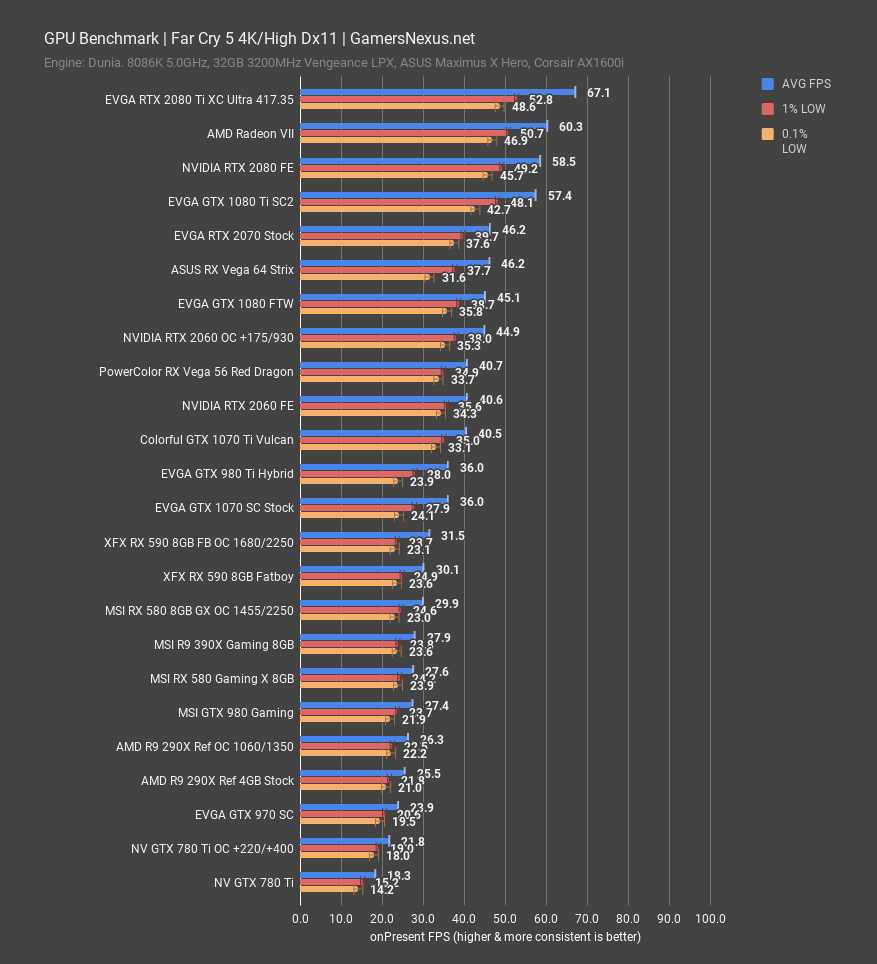 4K performance has the 780 Ti at 18FPS AVG, marking it as clearly unfit for 4K. That’s really no surprise given the 4K market in 2013. Other old cards also struggle here, and even the 1080 Ti ends up below 60FPS AVG, although it’s close enough to make things work with a settings change. 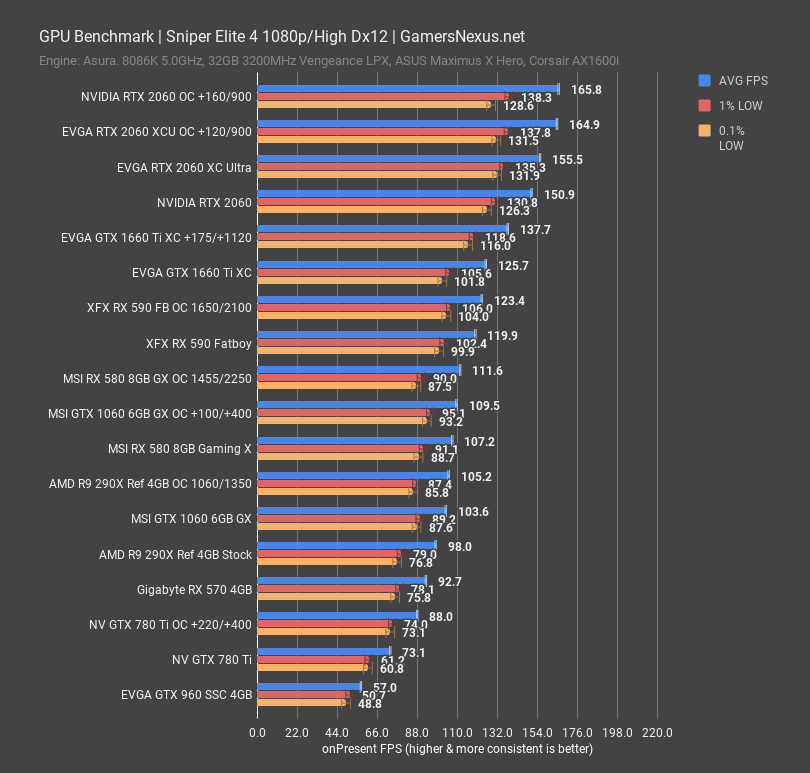 Sniper Elite 4 will only be tested at 1080p for this one. We normally also do 4K tests for some synthetics, but will stick to 1080p on the 780 Ti for today’s Sniper Elite benchmark. Stock settings run the game at 73FPS AVG, which ranks it as between the 960 and RX 570. The 290X runs 98FPS AVG stock, and we should note that this game is more compute intensive, so that may be the specific reason we see the advantage on the 290X. With the 780 Ti overclock, we end up at 88FPS AVG to close-in on the RX 570, but see that the 290X still holds a lead of 11% over the 780 Ti OC benchmark. The 290X climbs further with its own overclock, approaching levels of the RX 580 8GB.

If you’re upgrading for the same price today as you paid 6 years ago for the 780 Ti, the RTX 2080 is a massive upward shift that better enables higher resolutions. These are the main reason for an upgrade, we think, as the monitor market has migrated heavily toward more affordable 4K in the time since the 780 Ti launched. An RTX 2080 will probably cost about $100 more than the average MSRP of GTX 780 Ti cards of 2013 and 2014, with used GTX 1080 Ti or used GTX 980 Ti options still offering strong value positioning (for those comfortable with used, anyway). If you’re more cost-conscious about an upgrade, the RTX 2060 still outperforms a 780 Ti and is about $350, reviewed here, and AMD’s Vega 56 is a good choice when it can be found for around $300. Performance will be a couple times higher in average framerate with an RTX 2080, making it compelling, and so the card will allow for higher resolution or higher settings quality. The 780 Ti now sits closer to a 1060 than anything else, sometimes even lower than an RX 570, and so is beginning to show its age.