With a market cap of $136B at its disposal (compared against AMD’s $5.3B), Intel has the financial stability to push the limits of microprocessor architecture with each massive tock in their constant tick-tock cadence. We discussed Visual BIOS and Intel’s third generation of computing with engineers at PAX East this year, where Senior Marketing Engineer Fred Birang of Intel wanted to make one thing very clear to the enthusiast and system building communities: “We make more than just CPUs.”

He seemed passionate, so I pushed the point: “What is it that you want builders and gamers to know about motherboards?” Birang’s answer didn’t disappoint.

“We want people to know that we don’t just make a good reference motherboard, we make a great, usable motherboard; we’re not trying to dethrone anyone in the motherboard market, we just want the gamer mindshare – we’re more than a CPU company, we’re a technology company. Intel has a motto: ‘Better Together.’ We say this because we make the CPU – it makes sense that we know how to optimize a motherboard to go well with it. Our motherboards, like the Z77 line, are optimized for K-Series CPUs. They just go together.”

While talking with Fred Birang, I was playing with the Z77’s new feature-set and BIOS; the sliders make it child’s play to overclock components. As he said, since Intel makes the CPU, they know what’s best for it – a predefined overclocking range ensures that users don’t overstep their bounds, but also allows experienced overclockers and system builders the power to override settings if desired. We’ve had a lot of our readers voice concerns about Visual BIOS being “just fancy graphics,” so I talked to Birang about other features that might make V-BIOS stand-out as more than just a blue-and-black interface.

“Well, one of our cool features – let me show you,” Birang commandeered control of the mouse and clicked over to the relevant page, “Here. If you want to get to a specific page when you load BIOS, you can now tell BIOS to load that as [your landing page]. So … if you change the voltages a lot, you can tell BIOS to go straight to the overclocking page. If you change the boot sequence, you can send it there. It’s very customizable and functional and allows for advanced tweaking. We put a lot of thought into what can make the experience better for our users. Look, even the old BIOS screen is still there –“ With a twitch of the wrist, my Intel guide hopped over to a ‘classic view,’ which was just as contrast-y as always. “It’s been around for a long time now, so we know people are used to it. But we also want to do everything we can to advance the technology.”

A few feet away from me rested Intel’s NUoC (Next Unit of Computing, which we briefly discussed here), a 4”x4” motherboard that smoothly cruised along at medium settings in SC2. Birang saw that I was interested and slowly pulled the conversation toward Intel’s other innovations.

“I think the ‘All-in-Ones’ will really shake-up the Desktop market,” he told me, “Intel’s Ivy Bridge line – or as you’ve heard it all weekend, the Third Generation – has a lot of applications that haven’t even been discovered yet. We’ve had people tell us that they want to use them as Kiosk computers – a modder mentioned that he wanted to strap on a battery and small screen to make it a mobile devices. Our community is super involved with us, so we work with [the community]. We wanted to showcase the power of our new boards and CPUs when used together. This is it.”

Showcase accomplished. The system was hot-to-the-touch, sure, but considering the power of the little box – something that ran on Intel’s integrated graphics – it’s nothing that can’t be overlooked. 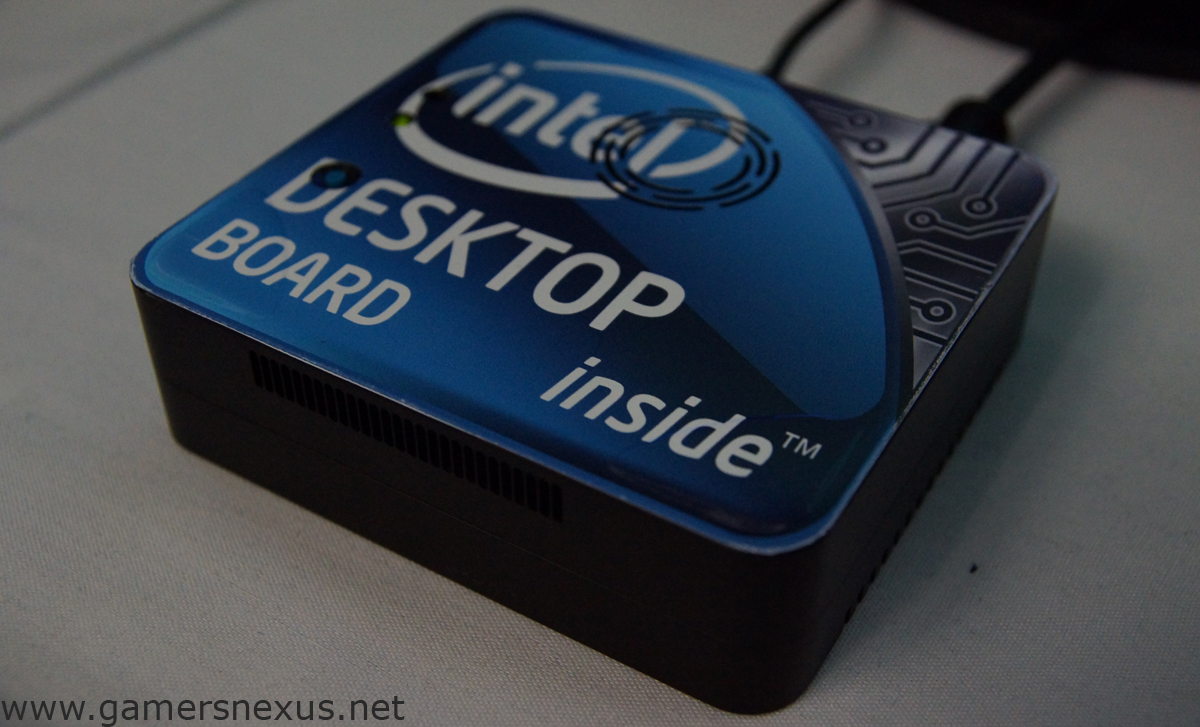 This plays StarCraft 2. It also fits in my pocket, albeit very awkwardly: "Is that an Intel NUoC in your pocket, or are you just happy to see me?"

All of this comes back to one thing: Similar to ASUS’ key to success, Intel works closely with modders, enthusiasts, builders, and gamers to accommodate as many feature requests as possible. It’s a big company with a lot of engineering experience and some of the most technologically-advanced factories on the planet; there’s not much stopping them from making some great enthusiast-grade motherboards.

Intel’s after acknowledgement in the motherboard market. The meeting’s recurring theme was “We’re not just a reference board.” Intel, as would make sense, puts out the first boards for their newer CPUs – they’re not, however, just boards to be copied by other manufacturers. They’re fully-functional, ready-for-use, optimized motherboards. As devices continue to consolidate and systems become increasingly integrated, Intel’s aim is to play a key role in the development and research of newer technologies.

When asked what his key message for the community was, Birang made it simple: “Follow our @IntelGaming Twitter account and tell us what you want to see from Intel.”

If you want updates as we post more Intel (more on NUoC is incoming), AMD, NVIDIA, or other hardware industry news, be sure to like us, follow us, or sub to our RSS feed.

Have questions for Intel or about this post? Let me know in the comments and I’ll get it answered for you.