How to Read and Understand a CPU Die

CPU dies have some of the most beautiful color highlights in computing -- and after showing you the process through which a synthetic crystal (silicon) becomes a CPU, we thought it was time to explain CPU diagrams and how to understand CPU dies.

Why learn how to interpret CPU dies? Because it's fun and you'll never need words on the diagram again; CPU die images are normally leaked before full specs, also, so this information can help you to identify what will be contained on upcoming CPUs.

Also, it's great party talk: "So, uhh, can you identify the vitals of a silicon chip that uses 22nm microarchitecture?"

Disclaimer: I am not responsible for your loss of friends should you attempt to use this knowledge at a party. 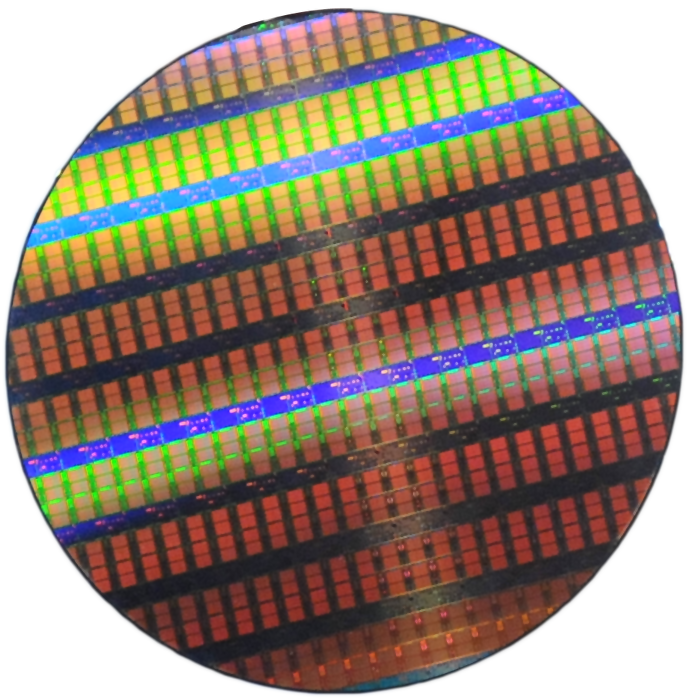 Above is a bare silicon wafer, which - as covered in the above link - is the resource that is cut into numerous CPU dies via lasers. Even a single molecule of dust can ruin an entire die, so the rooms these are contained in are normally extremely white and shiny, like Aperture Science.

If you look carefully, you can pinpoint the single dies on this larger wafer.

These are the tiny chips that are placed on a substrate (the traditionally green PCB that we handle when building a system) and topped with a metal plate (which is where we normally see branding). The substrate is covered in contacts or pins, depending on how far back you go; most modern CPUs use contacts, leaving the motherboard with the pins.

The tiny die above is where all the action happens -- that green PCB and metal cap are just enablers. Here's what the die looks like on a microscopic level, using coloring to highlight dense areas or differing functionalities: 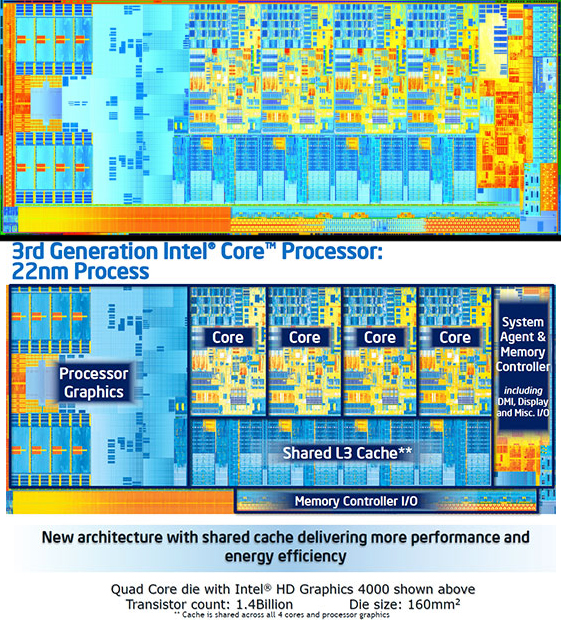 The top image is the unlabeled diagram. You may have seen these before (they're normally labeled, as in the bottom), but we can actually look at the diagram to determine where cores, cache, memory controllers, and (if applicable) on-board graphics processors are located. There are certainly practical uses of this knowledge in an engineering environment, but as enthusiasts and gamers/system builders, the primary use is one's own amusement and fun. It's always cool to know more about what you're abusing in games, anyway.

Don't be intimidated by it - it's incredibly easy.

If you look closely at the die, you'll see clusters of seemingly identical blocks. Let's start with the large, far left chunk of the die: On the 3rd Generation CPUs (aka Ivy Bridge), we see this portion, around 1/3 of the entire physical die, dedicated to on-board graphics processors (the Intel HD 4000 or 2500, determined by this chart). This block of transistors handles any graphics computing you're doing off of the on-board chip. Given the size of the chip, that's pretty impressive.

It's normally pretty easy to identify integrated graphics on a bare CPU die: they're often given an entire corner of the chip, so start by looking to the far sides. Then locate the 'bricks' (seen on the very far left here, in four-column format). The entire thing should be separated out by a swathe of less-interesting space, as signified by the vast blue ocean on the right side of the processor graphics.

Next up, we look to the top half, just right of the processor graphics, and can see the space allocated to cores. On 3rd Generation CPUs, we see four nearly-identical cores (which may or may not be hyperthreaded). Other CPUs, like the i7-3960X of the X79 enthusiast line, may show even more than that: 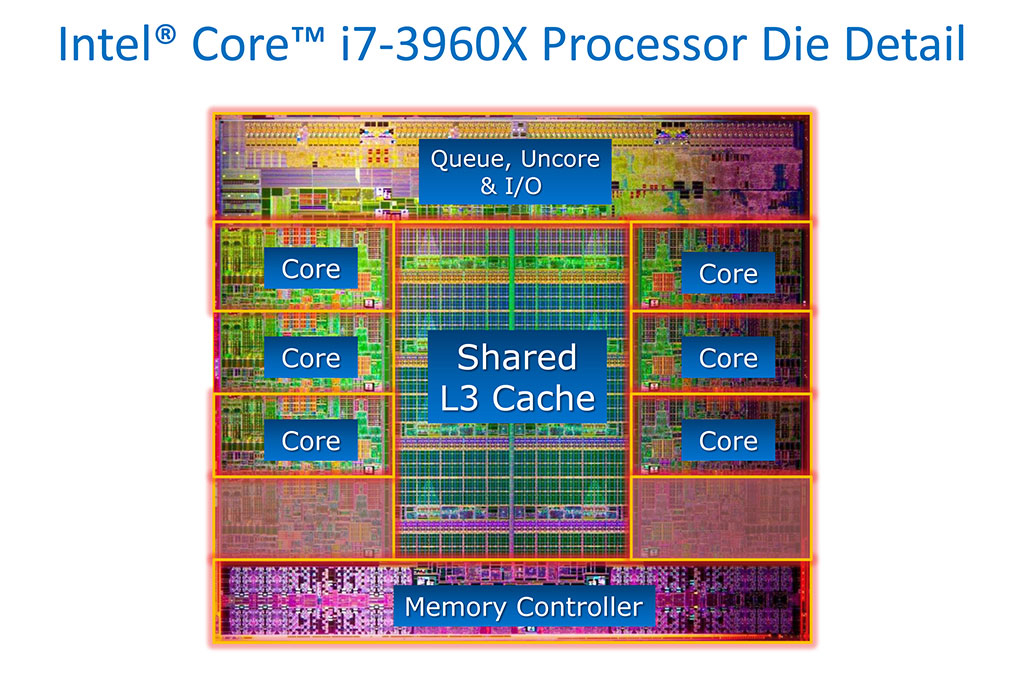 We see six cores separated by a massive space of L3 Cache (an impressive 15MB of it). You'll notice that the die shape of the i7-3960X is different from Ivy Bridge CPUs. The Ivy Bridge CPU dies are 160mm2, as opposed to the i7-3960X's 434.7mm2 (a much larger area allows for more functionality, of course, but may introduce other problems that are out of the scope of this article).

Cores are pretty easy to spot since there are several of them per die, and they tend to be of a very distinctive, wide/rectangular shape.

In our original 3rd Gen example, the cache appears directly below the physical cores -- we see that it's taller, skinny, and normally coupled. Cache will take up more size on the physical die depending on how much there is.

Finally, we're left with memory controllers (and potentially other features, depending on CPU generation). Memory controllers are almost always longer/skinny and take up an entire edge of the die.

That's really it -- there's not much more to reading a die than that. As generations evolve, you may start seeing controllers or objects that weren't covered in this guide, but feel free to leave a comment here and ask any questions or add any info you have! Keep in mind that CPU dies often leak before specs do, so this knowledge will help you identify how many cores and what other features are planned to be on a CPU!

Think you know something that could be helpful or have a question that others might wonder about? Leave us a comment - that's what we're here for.