While this guide won't go into numeric specifics for overclocking your components (primarily because this varies based on each hardware configuration), we can provide a firm starting ground to help you understand what you're looking at.

Additionally, you may want to look into an aftermarket heatsink for more extreme overclocking.

We've provided a video to help speed up your understanding, though you'll get more depth in the remainder of the article:

If you're looking for more info on GPU overclocking's fundamentals, check out this video:

Overclocking's fundamentals remain largely constant, regardless of the component you're working with. At the end of the day, the objective is to make things faster -- modern BIOS interfaces (along with its newer UEFI and Visual BIOS counterparts) are equipped with guided overclocking features. MSI's OCGenie and ASUS' AI Tweaker are good examples of this, but those don't often achieve the level of accuracy and max-performance-to-stability that manual tweaking will.

If we look at a more contemporary example, here's what your standard 4GHz Ivy Bridge CPU would look like:

If you read our Benchmark Your PC Like a Pro guide, you've heard of CPU-Z. If not, go grab it now. It's quick to install, free, and indispensable for system diagnostics. You'll need this in a moment.

It's a bit more complex than this, of course, but for purposes of keeping this guide as the promised top-level primer, we'll boil it down to this simplified and practical equation:

Let's take my First Generation Intel i7-930 Nehalem CPU as an example. 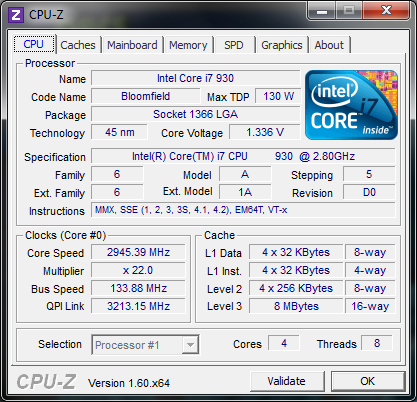 In this screenshot of my CPU-Z readout, we see that the CPU I'm using reports its bus speed as 133.82MHz. My multiplier is x22. 133.82MHz * 22 will roughly equate the core speed we see listed above the multiplier (the operating frequency), which computes to ~2945MHz (2.945GHz). This will vary based on CPU utilization with Turbo Boost functionality.

Now, with some changes, you can see in this screenshot I've very slightly increased the base clock to 145MHz (the base clock was the 1st Gen i7's most dominant OC metric); multiply the new 145MHz BCLK * the existing 22x multiplier (the max multiplier on this chip), and we now have an operating core speed of roughly 3189MHz, or ~3.2GHz. This is the way you baby-step into the bigger OC leagues. 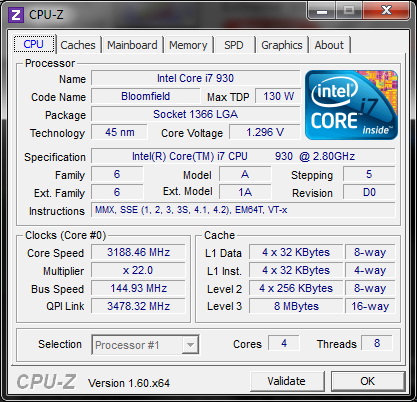 A note on Ivy Bridge CPUs: You will find that increasing multipliers is the best way to maintain stability while achieving faster processing speeds. Nehalem architecture is now dated, and Intel has shifted focus on keeping lower base clock speeds (for lower heat and power consumption), but since multipliers can now easily push into the 40s, you've got quite a bit of room to play.

Here's where we use that knowledge:

Increasing the multiplier will increase the core speed, but risks destabilization.

However, in my case - and in the case of several other (locked) modern CPUs - the multipliers are capped fairly low. If you find yourself hitting a multiplier wall, it may be possible to push the operating frequency beyond the multiplier limitation by additionally increasing the BCLK (base clock). This can cause great instability and potentially overheating issues, so please seek out advice on your specific CPU before doing so.

As you modify your multiplier (do it in slow steps - and don't do it until you read our disclaimers below), you'll see the core speed increase. At some point in this process, an overly ambitious multiplier (and/or base clock) will likely result in a system 'freeze' or thermal shutdown. This is for a few reasons, but the most obvious of which is heat. A faster CPU works harder and will generate more heat, requiring a larger or more tuned CPU cooler/heatsink (liquid cooling or, in extreme cases, liquid nitrogen should do the trick - because we all have tanks of that lying around).

The thermal shutdowns are to protect the CPU and should not be catastrophic. Just make sure you don't get too ambitious -- adjust everything in steps, whether that's the voltage, BCLK, or multiplier. Do it all in small increments.

Pushing the Limits of the Multipliers/BCLK with Increased Voltage

How, then, do you push past the unstable multipliers and base clocks? Well, once you've discovered the threshold at which your system becomes unreliable, you can tweak voltage settings to increase stability and potentially attain higher core clock frequencies. Don't push it too hard, though, for that could result in premature death of the chip.

Voltage is the next driving factor in our guide: Processors aren't fabricated equally and will have varying degrees of reliability when placed under high multipliers and high voltages. A CPU can exhibit a catastrophic failure when placed under a load it is not capable of sustaining, so please, overclock responsibly. That said, adjusting a processor's vCore voltage will stabilize its performance, permitting still higher multipliers (unless you've hit the cap, in which case your die must be ultra-stable!).

Tweak the multipliers first - one at a time - and locate a reliable core speed. Determine where the threshold for failure is; you will need to run stability tests (below) to properly locate this threshold. Simply running a system will not out the potential underlying issues.

After running stability tests (again, below), if necessary, increase voltage to accommodate your new CPU frequency/speed.

Before we move on, it is important to note that you should increase the RAM's frequency along with the CPU's frequency -- if the RAM can't keep up with the CPU, you'll be burning/wasting cycles of the CPU with zero gain.

As briefly covered above, and explained with great care in this 2006 Overclockers' Club post, there are two tangible limitations when working with CPUs: Heat and voltage.

Too much heat will result in volatility, thermal shutdowns, and can potentially damage the chip (although modern motherboards and CPUs will often disable a system before major damage occurs). Too much voltage, though, will in turn generate more heat and, by nature of sending more power through the chip, can trigger a catastrophic, unrecoverable failure in the CPU, similar to what might be seen in a large electrostatic discharge from the user.

Provided adequate cooling is present, you should be able to overclock to a commendable level without overdosing on voltage.

You won't always be able to immediately notice volatility after overclocking -- the best way to trigger a contained failure is with benchmarking and stress-testing software. We've covered this in depth in a previous guide, so I'll direct you there for further details. The tools you're most interested (covered in the linked guide) will be CPU-Z, Prime95, and Memtest86+. FurMark is an excellent choice if testing GPU stability.

Some quick links to overclocking tools and utilities that we find useful:

No matter the CPU, overclocking will effectively void your warranty. Please keep this in mind: You will not be able to request a warranty replacement in the event you have triggered an unrecoverable failure in your CPU.

Please monitor your temperatures closely when overclocking. As good as modern software and firmware can be, they're not always 100% reliable and they can't always trigger a thermal shutdown before the damage is dealt. We recommend using hardware thermal probes for the most accurate read-outs, though software is also available for these purposes (again, discussed in the benchmarking guide - CoreTemp will be one of the most important tools).

If you have any questions at all - any - please post them in the comments below or request in-depth assistance on our forums. Overclocking is a fun endeavor and will educate you on system stability, pushing your build to its limits, and furthering your success as a system builder. Given the right tools and enough patience, you shouldn't be afraid of a total collapse of your cores -- ask us for CPU-specific advice, follow the above examples, and proceed in small increments and you'll be just fine.

Have feedback for us or think we missed something important? Comment and I'll have it added.

Thanks to Kingston, Intel, and EVGA for providing additional clarification on these items.