For the most part, system building is incredibly straight-forward: Purchase components, just add screwdriver. Some cable management later and you're mostly done. Sometimes, though, things don't work out perfectly - as was the case with our once-famed Zalman CNPS 9700 LGA 775 cooler. It didn't quite fit on the newer LGA 1155 socket (specifically on an ASRock Extreme4 motherboard), and rather than waiting another agonizingly-long three days for an adapter bracket to arrive, we took it upon ourselves to mod the existing 775 mounting plate to fit the LGA1155 socket.

For all of you who just enjoy case and system modding, here's a quick how-to guide for converting 775 bracketed coolers to 1155 sockets. As always, we'd suggest that you take care when working with low-voltage electronics and wear an ESD wrist strap (or even read our anti-ESD guide). 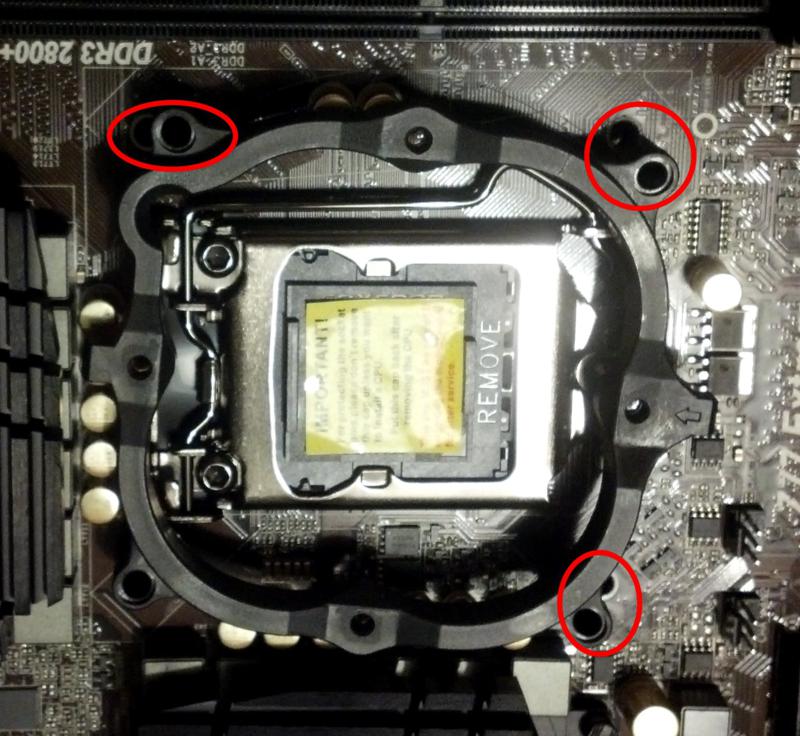 The top bracket doesn't exactly line up with the 1155 holes. This was to be expected. Thankfully, ASRock built in 775 holes as well; though not visible from the image, our bracket is sitting atop the correct (775) mounting holes. 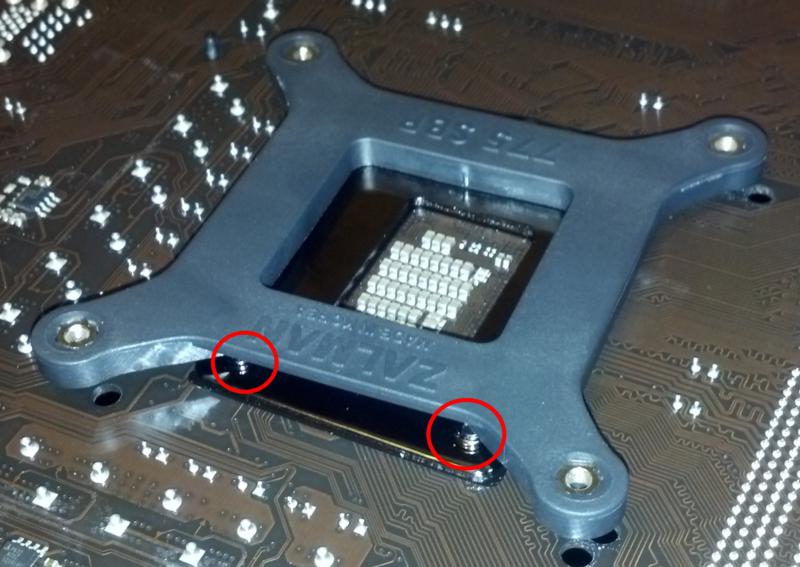 With the bottom bracket placed on the corresponding 775, holes you more visibly see that the bracket and the socket are not going to line up squarely. This could tweak the board unfavorably and potentially cause stress damage or allow a direct short, given an unfortunate enough series of events. What may be less visible, but perhaps more important, is the way that the socket's screws interfere with the placement of the bracket. Check out the next image to see more detail.

Here we can see that the bottom bracket does not mount flush with the motherboard. The screws from the socket 1155 backplate are the clear culprits. We are now charged with improving the situation. 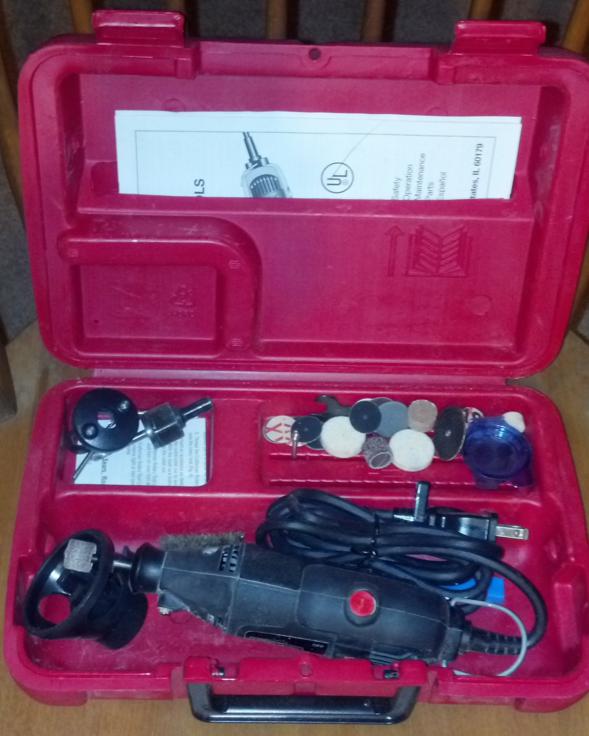 Power? Check. Sharp blade? Check. This should do the trick.

Enter old faithful: the dremel tool! There are few modifications that this little sucker can't tackle. This entire process takes about 45 minutes. 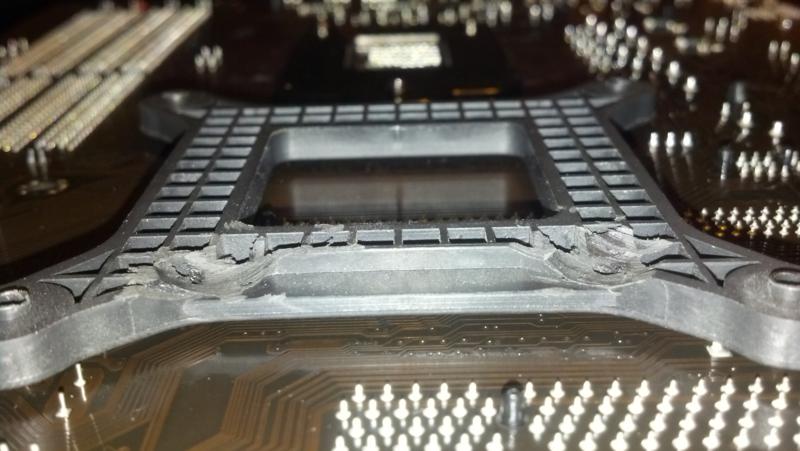 Using the tool, cut the proper amount of plastic away so that the interfering screws from the 1155 socket backplate will no longer be in the way. 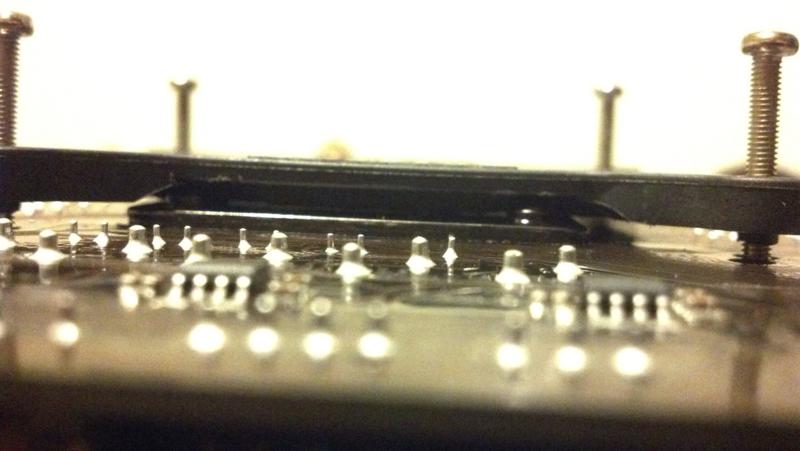 Now we thread the screws in to the backplate in the opposite of their normal direction. We do this to make sure the backplate is lined up with the 775 holes and to make sure that the Zalman backplate is sitting flush on the socket 1155 backplate. In the image, you can see we have good, flush contact. It took three checks and re-adjustments to get the fit to be acceptable. 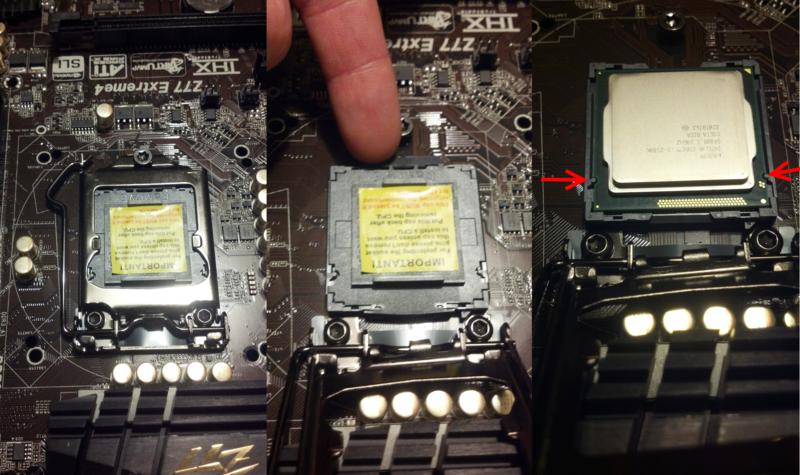 If this is your first socket 1155 install, you'll notice that the pressure lever has changed from the 775 days. Once you get the lever up and the clamp off you'll need to remove the plastic protection insert. We had to use a spare fingernail -- you know, the kind you keep lying around in pickle jars, just in case -- to pry up the front end for it to snap out. We then gently inserted the CPU, making sure that the notches in the CPU lined up with the socket.

Insert your screws into the top bracket to make the coming installation easier.

Locate your 775 holes and drop the top bracket in to place. 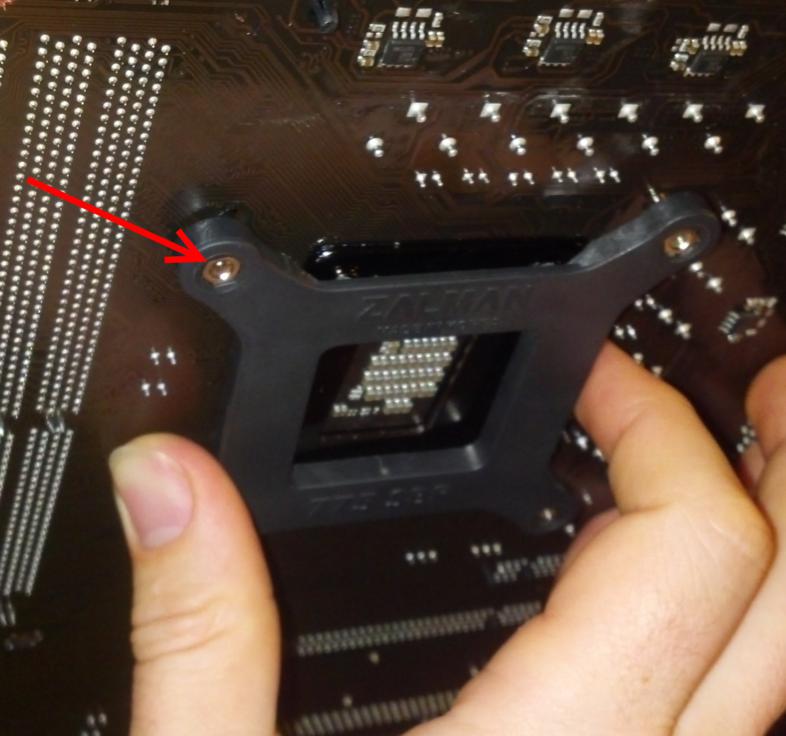 While holding your first screw in place with a screw driver from the top side, line the bracket up and begin attaching it. Loosely fasten all of the screws before tightening any of them. Then in an alternating pattern slowly tighten all of the screws. 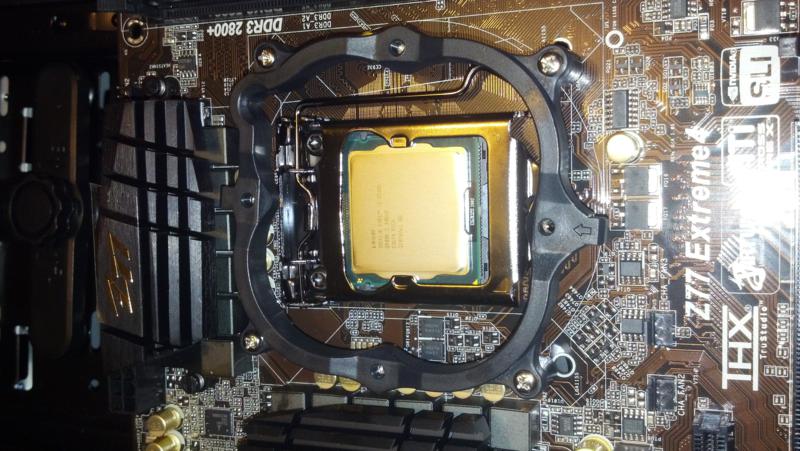 And voila! We have a beautifully mounted, secure CPU cooler bracket. Now let's check the backplate to make sure it's okay. 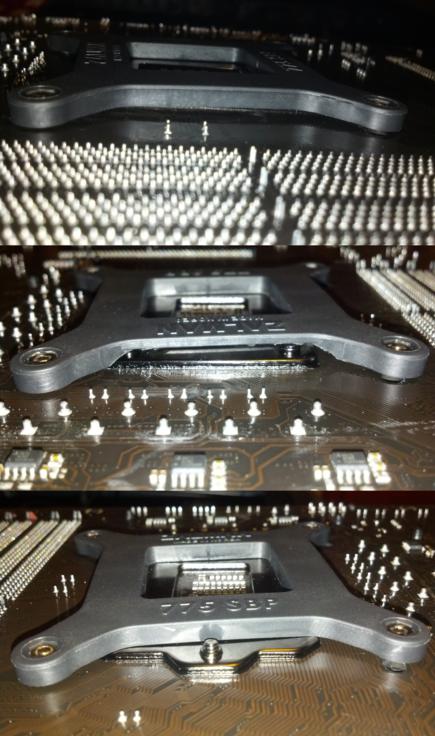 Everything looks good here as well. The backplates are flush with one another. 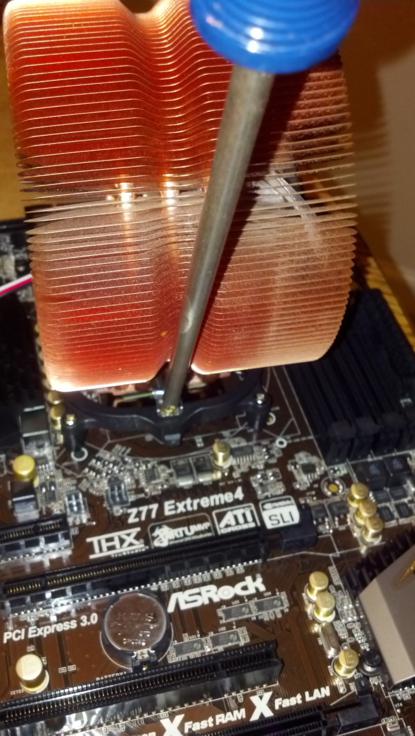 Before positioning the cooler, insert the two small screws in the S-bracket. Now we line up the cooler with the motherboard mount for a quick test fit. Love that shine on the heatsink!

Tighten down the difficult-to-reach top screw first. Then go for the easier bottom screw. If you have trouble getting the bottom screw in because of the tension on your S-bracket, check out the next photo. 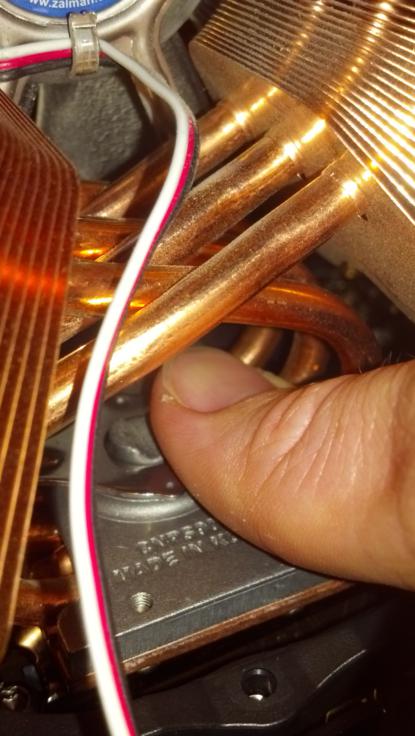 Here's what we did to make tightening that second screw a little easier. The side of the cooler that faces the I/O panel is wide open; stick your left thumb in there for a ton of downward pressure on the S-bracket. Combine that pressure with the force of your screw driver and you should have just enough to safely fasten your cooler. 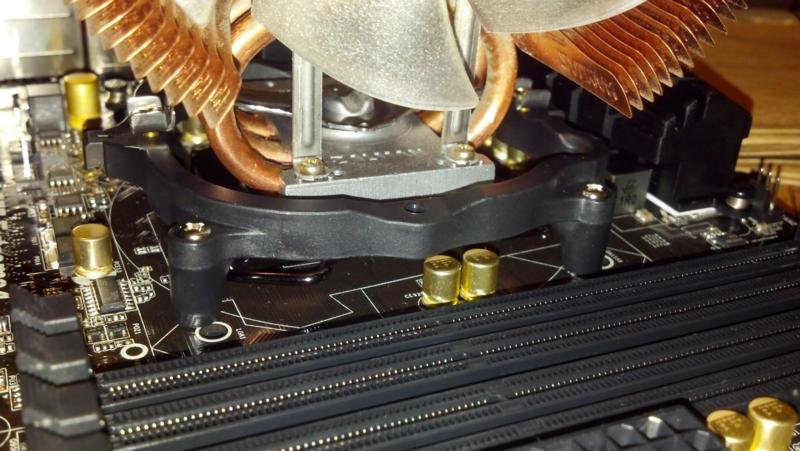 Notice that we did not fully tighten the screws as this was just a test fit. At this stage your goal is to make sure that the CPU's IHS (Integrated Heat Spreader) is fully covered by the 9700 LED's copper plate.

Let's do one last check before we put this baby together permanently. You never want your cooler to be on so tight that it warps the board and causes chip separation (i.e. the Xbox 360's red ring of death), so we put the board on a flat surface to make sure that the differential is uniform.

Time to put thermalpaste on the CPU plate and mount the heatsink. 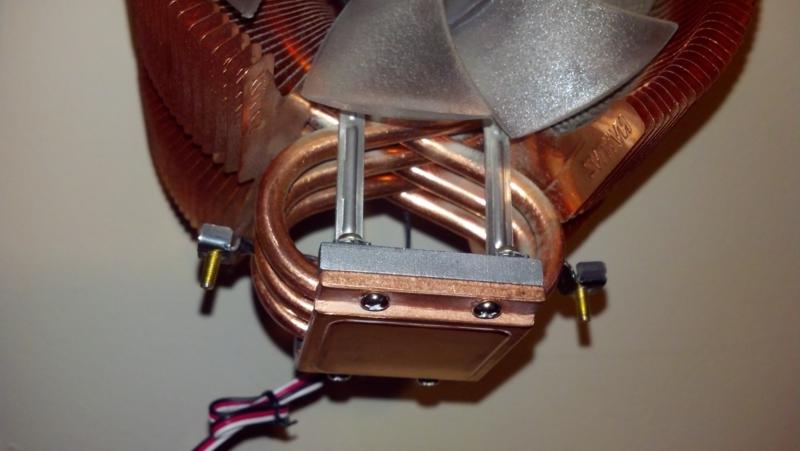 Just like earlier, go ahead and insert your screws into the S-bracket first. 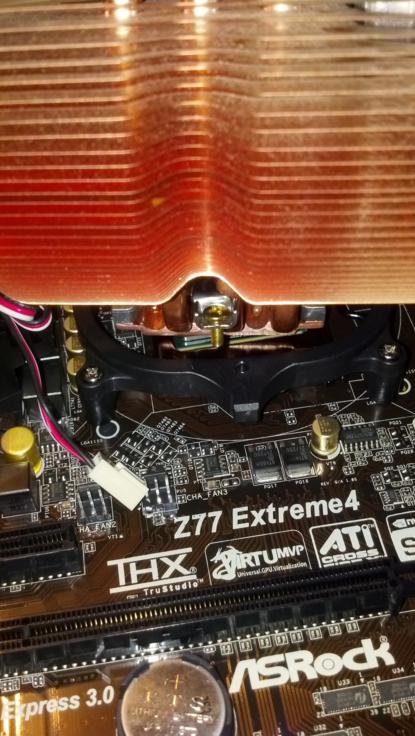 Now work the lower screw in to place. Use your thumb if necessary. Try to bring the cooler down in the proper orientation. You can see here that we missed and landed just a bit to the left. If this happens, don't worry too much -- if you're in the mood for utmost cleanliness, just pull it off, clean it, and try again.

Here's one last look at the backplate with the motherboard mounted inside the case. Note that even with the cooler mounted on a slant (because of the placement of the 775 holes), it still clears all four RAM slots.

The system featured in this guide is running happily around 34C in a 27C ambient environment. If you need help performing this (or similar) modifications, comment below or check out our hardware forums!