We're back with another mouse review, this time from a manufacturer not usually (or ever, really) known for their gaming mice: Rosewill. Admittedly, this review comes in part because of an urgently needed mouse replacement caused by the mechanical failure of a certain Genius Deathtaker, so anything that can left-click is a definite improvement, but we'll try to give some honest pros and cons.

To see some other recent mouse reviews, check out our look at Logitech's G500s and G700s or the Genius Gila review.

The Reflex Gaming Mouse (RGM-1000) is one of only two or three Rosewill gaming mice on the market, depending on how loosely you define "gaming mouse," and is the only one with a competitive, marketing-heavy 8200 DPI. Let's take a look at the specs:

The mouse itself is on the bigger side of medium, and fits a palm or fingertip grip fairly well, though gamers used to smaller mice (like myself) might have trouble adjusting to the size. I'm a fan of its elongated shape with straight, narrow left and right buttons, which allow you to arch your index and middle fingers to whatever degree you find comfortable. The placement of the side buttons just above the thumb and the outward-sloping sides of the mouse make it an impractical mouse to pick up and toss around on the pad (as I was accustomed to doing with the Deathtaker). The 8200 DPI cap comes into its own here, as it's ideal to control the cursor with single movements rather than lifting the mouse. Beyond that, though, the mouse wheel and buttons are very conveniently placed, with sharply defined differences in height and texture to avoid any confusion. The shell is composed entirely of a smooth matte black plastic; GN Editor Steve Burke isn't a fan of the slick surface's texture, but I appreciate not having fingerprints everywhere (perhaps I need to reconsider my priorities). The cord is designed to last, with a fabric coating and reassuringly heavy reinforcement where it joins the mouse.

The Reflex functions perfectly well mechanically; the DPI adjustment, clicking, and scrolling all work as expected. I used 4000 DPI as my typical setting, which was completely sufficient for my needs. The sensor isn't quite as precise in its movements as Logitech's G502, but it's tough to beat an arguable leader in the marketplace.

The thumb buttons are large and easy to depress, and out of the way enough that I never pressed them accidentally. All the other buttons are between the middle and index finger, also out of the way. The RGM's scroll wheel is of the clicking variety rather than free-wheeling variety and is textured for good grip -- not nearly as impressive as the Logitech standard or Thermaltake grip, but functional.

As is typical with gaming mice, the color, brightness, and pulse speed of the LEDs under the Rosewill logo (not the mouse wheel) are customizable. A full palette and adjustable saturation options are present for those obsessive about matching a rig's color scheme. The mouse wheel and DPI indicators remain a solid dim red regardless of settings.

There may only be two settings profiles shown in the mouse configuration menu, but it's easy to save profiles in .pfd format and load them again with the "Save As" and "Load File" options. The whole configuration menu is very simple and self-explanatory, including controls for button configuration, polling rate, acceleration (eugh), sensitivity, scroll speed, double-click speed, DPI settings for each of the four levels (with separate X and Y sliders), and the LEDs. Some of these options tie directly into Windows' mouse settings.

Besides this message, the software isn't so bad to use.

But enough with the positives -- on to the fun part. There are several obvious flaws in the Reflex, starting with the construction. The single most frustrating part of the design has been that Rosewill took the USB symbol, universally regarded as going on the top of USBs, and printed it on both sides of the plug. As someone who's been using a laptop and moving around on a regular basis, a badly-marked USB header in a dim room is my worst enemy. A small complaint, but one we hope Rosewill can learn from.

More importantly, the rubber thumb pad feels very poorly glued to the mouse. There are several parts on the edge of the pad that easily peel away from the body of the mouse, even during normal use. The pad isn't going to fall off anytime soon, but it's mildly uncomfortable and sure to collect grime. 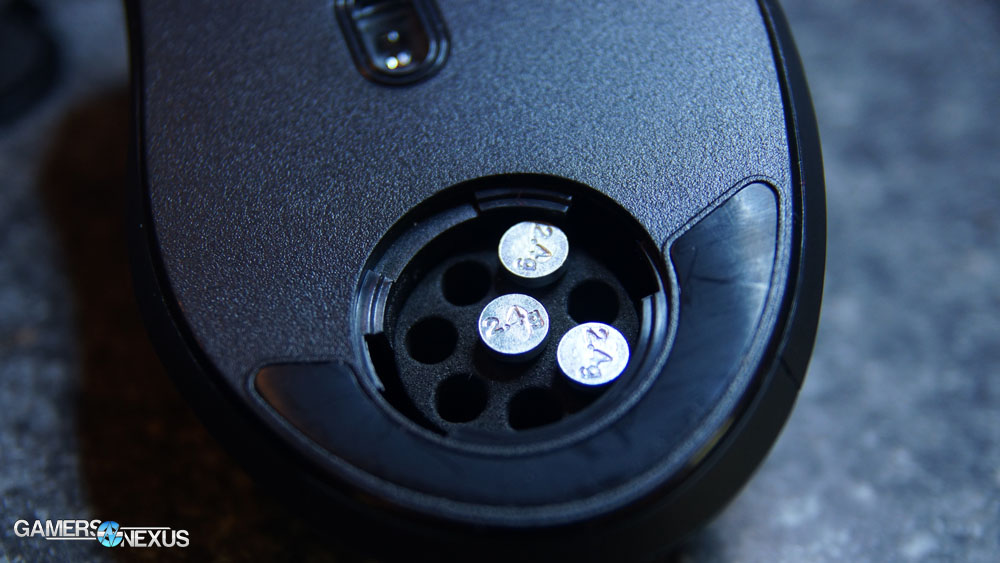 In addition to this, there's no way to assign mouse buttons to mouse 4 and beyond (mouse 1 is left click, 2 right, and 3 middle click. Many gaming mice have buttons for 4 and 5 as well). By default, the side buttons are bound to control, shift, and alt, and although the functions can easily be changed via the configuration tool, the options are standard keyboard buttons, DPI controls, media buttons, macro controls, and profile switch. If you've relied on mouse 4 and mouse 5 in the past, get ready to start using F1-F12 instead and bind the three side buttons to some of those.

Sadly, all of the data stored in the two profiles—color scheme, DPI, polling rate, etc.—seems to be stored on the computer rather than the mouse. I say "seems to be" because when the mouse is set to one color scheme, for instance purple, and then plugged into a different computer on which a different color scheme was previously selected, the LEDs will be purple and stay that way until the configuration window is opened (and at random intervals afterwards). Why, then, isn't the profile 100% saved in the mouse? And if profiles are stored on the computer and can be created manually, why are there only two profiles on the actual configuration screen? Confusing.

The macro button is fairly limited in its scope. As far as I can tell, the only commands that it will record are mouse wheel scrolling up and down, and left, right, and middle clicks. I'd prefer being able to assign other functions. Really, the only situation in which I'd use a macro is to perform a complex or repetitive sequence of key presses that I normally couldn't do by just using the other mouse buttons (see: MMOs). The best-case scenario is that you use it to record rapid left clicking or constant scrolling to spare yourself from carpal tunnel, but even then you'd either need to make a lengthy recording or keep pressing the "play macro" key.

Taking all that into account, I'd say that the Reflex definitely isn't worth the $60 or $70 full price, and probably not even the $40 it's going for on Amazon right now. If you can find it for $30-$35 and are willing to overlook the downsides, it's a simple and comfortable mouse to use. Otherwise, spend the extra few bucks and get a Logitech G500s or G502.