Pre-overclock, our Maxx Mem copy results expectedly place ADATA's 2666MHz XPG memory at the top, though the closest competing kit is Corsair's Vengeance Pro model. Disparity between the HyperX Fury and Vengeance Pro kits is within margin of error and should be regarded as identical for this benchmark.

Looking at read speeds (file read), similar results are presented with the exception of the Vengeance Pro memory marginally outranking the Fury kit. The results thus far are relatively uninteresting, beyond the high performance exhibited by ADATA's kit.

Memory write is our next chart. Once again, it goes ADATA, Corsair, and then HyperX in the standings; the differential between the Vengeance and HyperX products is close enough to be regarded as irrelevant. Selecting either of these kits based on price would be the way to go thus far, though things will change as we progress through the real-world tests.

Latency is the last item tested by Maxx Mem, representing the time in nanoseconds between transactions (lower is better). Somewhat surprisingly, ADATA's high-performing memory retains an exceptionally low latency given the RAM spec. The HyperX Fury, low-end ADATA unit, and Vengeance Pro are all within spitting distance of one another. HyperX and Corsair are neck-and-neck for latency.

Overclocking all the modules saw mirrored results to the stock clock performance above. 's Fury memory performs admirably, trading blows with Corsair's nearby Vengeance Pro. All memory performed stable at its overclocked settings, the only exception being 's ultra-value RAM (which is really not intended for any OC at all).

Testing computational fluid dynamics performance gives a look inside of the memory's under-load capabilities. Using Euler 3D, we found that -- once again -- ADATA's very expensive memory stands at the top. Among closer competitors, the Fury memory is just barely edged out by Corsair's Vengeance Pro line. This remains true in the overclocking results.

Although our games testing was tossed out due to identical results, Cinebench shows some disparity between products. Testing memory using games is tough; most games will not be memory-bound in any capacity, instead deferring to the GPU and CPU for FPS output. We saw marginal advantages between 1600MHz ADATA value RAM and the faster 1866 Vengeance and Fury RAM, and somewhat noteworthy gains between 1866MHz and 2666MHz.

These results are mirrored in some games in the real world, though generally it's within margin of error and ends up being a flat-line chart. Formula 1 2012 is one of the few games that sees large gains in FPS from memory, but we've opted not to test this since it seems more like a benchmark of F1 and not the memory (being the only game I've found with such a response).

Handbrake provides an indicator of memory performance in more intensive, real-world applications -- like video transcoding and encoding x.264 files. The test results show the top three performers -- ADATA's high-end kit, Corsair's Vengeance Pro, and the HyperX Fury memory -- are all within margin of error of each other. The XPG value and value lines could be noticeably worse when this type of encoding work is being performed several hours a day (professionally), but are otherwise not noteworthy.

This in-house test renders-out a high-bitrate media file using Adobe's media encoder, pushed through Premiere. This test is as real-world as it gets, reflecting tasks we perform regularly for the site's YouTube channel. The results showed the HyperX Fury memory trailing in stock frequency performance, but leading the pack in overclocked performance. I suspect that the CAS timings had more impact on performance in encoding, hence the drop in ADATA's ranking.

Whether or not such a difference matters to you will hinge upon how many hours you spend rendering videos.

After Effects is a leading real-world tool insofar as memory consumption. By using the RAM preview function, AE loads the entire video into memory to reduce hits to storage and streamline FX previewing. The results are admittedly rather boring, with everything landing between 12 and 13FPS, the exception being ADATA's $200 kit of 2666MHz RAM. 's Fury memory does make pretty big leaps with a 2400MHz OC, but still hovers just around 13FPS. 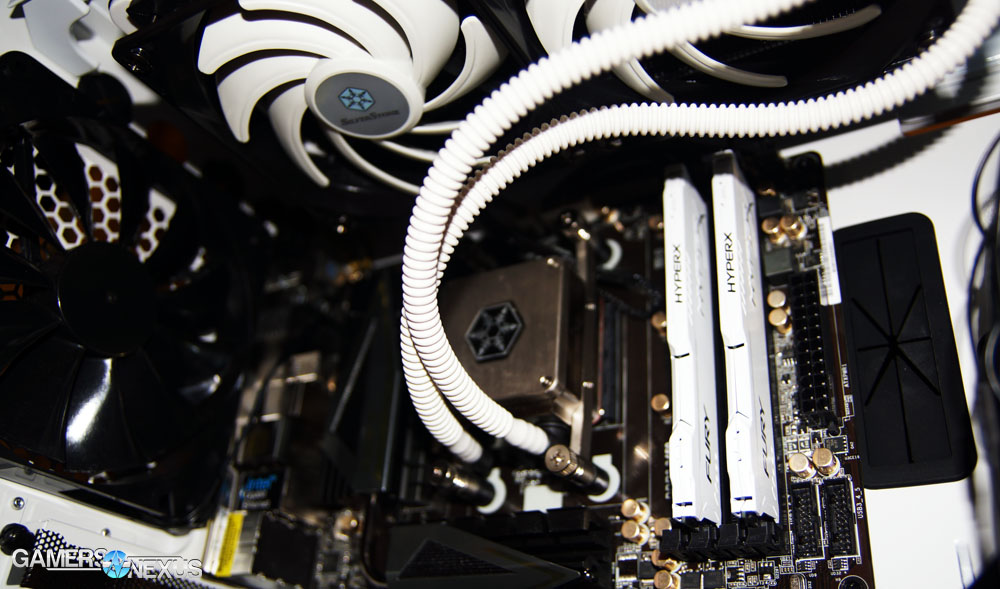 RAM is still a rather uninteresting subject, and no DDR3 kits are going to change that right now. The Fury memory doesn't exhibit obscene performance anywhere and seems to be at a minimum on-par with competition, if not slightly better than it. This combined with the color choices -- and honestly, that is a driving force in selection right now -- makes the Fury RAM a reasonable recommendation for new system builds. I can't really find anything "wrong" with it, it looks good, performs as expected, and beats competitors by a few bucks depending on how the wind blows that morning.

As for the subjective, aesthetics stuff, I'm a big fan of the matte white color -- it looks excellent with the white H440 we reviewed.

If you need help in selecting RAM for your build (or other parts), leave a post in our forums!