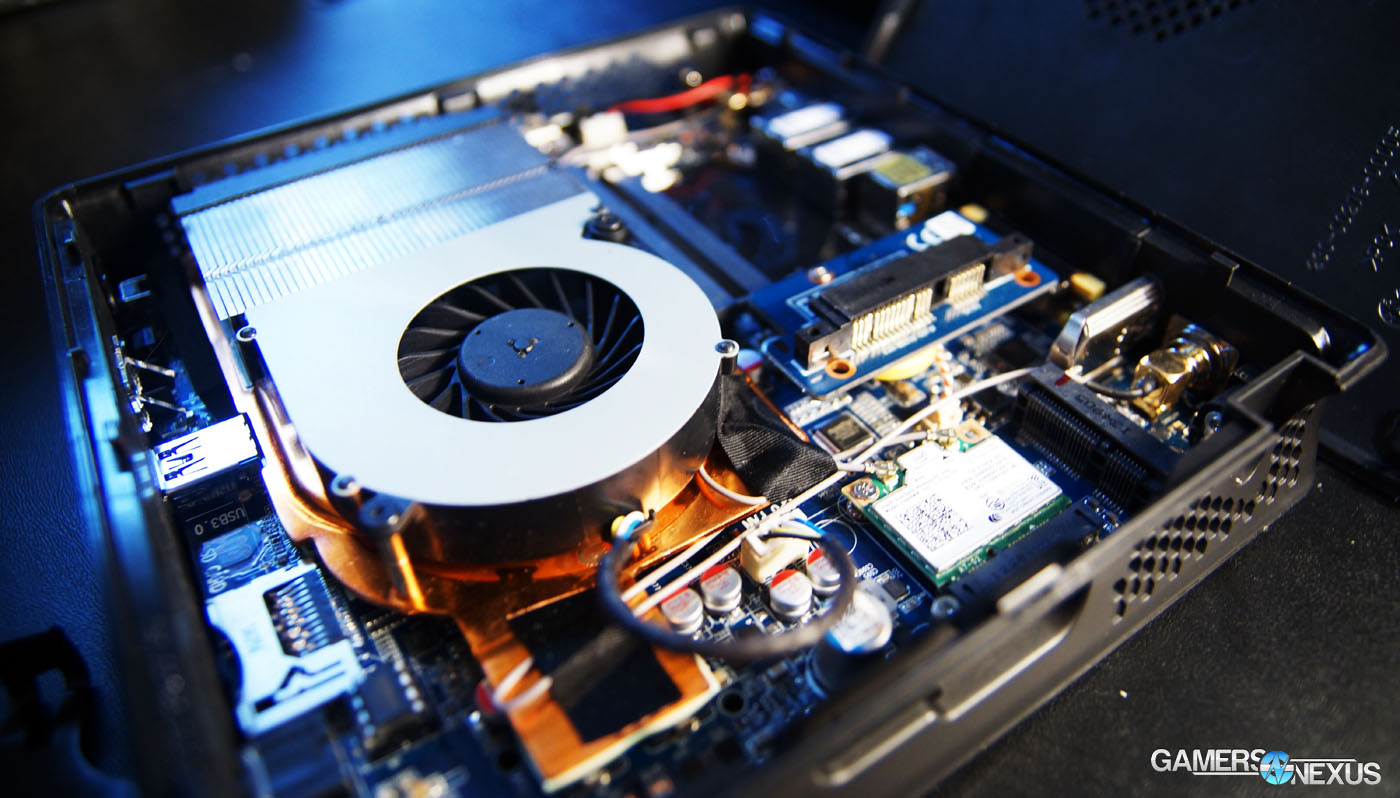 And we arrive to the review. Today's review of Zotac's EN760 gaming ZBOX and 860M benchmark aims to look at thermals, build quality, gaming performance, and scalability to 4K displays.

Zotac provided the EN760 non-Plus ZBOX for review purposes, so we were able to install our own RAM and SSD in the unit. The company has also noted that it intends to promote the DIY solution most heavily -- and for our audience, before even getting into the review, I'd agree with that. There just isn't a lot of value added in a single DDR3-1600 / 8GB stick and 1TB 5400RPM HDD; actually, the HDD is slow enough that it detracts from gaming performance when compared against the option of installing a 7200RPM or budget SSD alternative. A 5400RPM HDD will also operate much louder -- a noteworthy factor when building a home-theater PC.

The EN760 hosts 2x204-pin DDR3L SO-DIMM memory slots (effectively laptop memory), capable of operating at 1600MHz with 16GB capacity. A single 2.5" drive sled is present, mounted just above the memory, and is joined by a single mSATA slot for slimmer devices.

That out of the way, let's look at the other specs.

Networking capabilities include an 802.11ac Intel Gigabit wireless card (as found in laptops) with an antenna, so you won't need an external USB wireless adapter. The ZBOX also hosts native Bluetooth 4.0 support (along with an antenna) for easier mobile connectivity. Two RJ-45 ethernet jacks are present for those who prefer a more stable and wired connection.

I/O is pretty standard affair -- see the specs table above for all that. I sometimes felt limited on the 4xUSB3.0 ports (mouse, keyboard, controller, external Blu-Ray or storage), but it was survivable.

The ZBOX measures in at 7.4" x 7.4" x 2" (188 x 188 x 51mm), making it smaller than what is possible to be built by hand for a similar price. The outer shell is a sturdy plastic held together with a few screws; removing these screws allows the side panel to slide off, revealing the proprietary board layout, (empty) RAM and HDD slots, and the relatively large semiconductor cooler.

Plastics quality isn't anything to complain about. It's sturdy and ventilated throughout, and although fingerprint smudges abound, the shell feels as if it'll hold-up to regular open/close cycles.

The layout of the system is interesting, but tight, and set off concern for thermals (which I test below). Our GPU (and presumably the CPU) is hosted underneath a large aluminum and copper heatsink, actively cooled by a single push fan. Heat exhausts out the back of the unit, slotted for better ventilation. These are the hottest components in the system, naturally.

Immediately adjacent to this heatsink is a split-level compartment for storage and RAM -- think of a split-level home, I suppose. The RAM lives slightly below the rest of the components, the 2.5" storage lives above the RAM. Close quarters.

Installation is pretty straight-forward. I've already done a video on how to install RAM & an SSD in the EN760, but we'll briefly cover it here. The steps include:

Anyone can handle this, really. System builder or not, the "mainstream" buyer would be plenty capable of this installation. Very easy and straight-forward. No screws to lose. No complaints.

Setting up the EN760 as a DIY Steam Machine would be a pretty trivial task. The EN760 may as well be a Steam Machine, anyway -- it's just missing the OS and controller. A quick drop of nVidia's new GRID controller or the mainstay Xbox 360 wireless PC controller, though, and that problem is solved. To install SteamOS, follow these steps:

Very easy to do, you're just missing that haptic controller -- but there's no reason the more standard Xbox 360 or new GRID controllers can't do the same job for gaming from a couch.

Continue to page 2 for the full thermal and FPS benchmarks to see gaming performance.