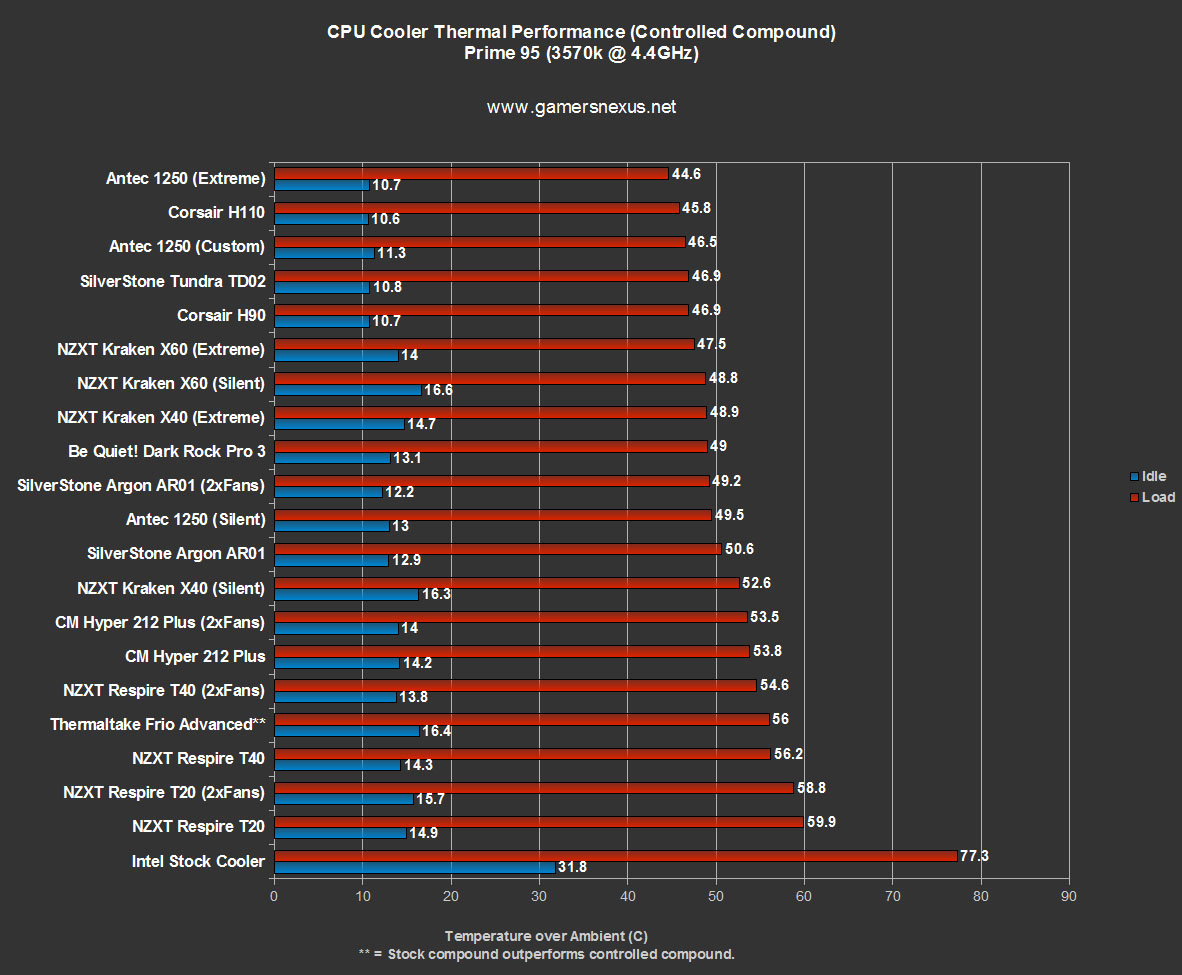 As always with air coolers, I benched the Dark Rock Pro 3 using both the supplied stock thermal interface and our controlled Antec Silver compound. The compound included with the DRP3 is exceptionally runny (liquid-y) and doesn't stick very well when battling the mounting mechanism, and as such, didn't see as reliable performance as with the Antec compound (which is a bit more solidified).

Above is the stock thermalpaste test. The DRP3 ranks just barely above all other air coolers on our bench -- just above the dominating AR01 with 2 fans -- and rests firmly below the X40 CLC on its loudest settings. It's worth noting that the DRP3 runs substantially quieter than the X40 on Extreme, perhaps making it a better choice for noise-conscious users (unless you're fine with running the X40 on Silent, in which case it's going to be quieter than the DRP3). 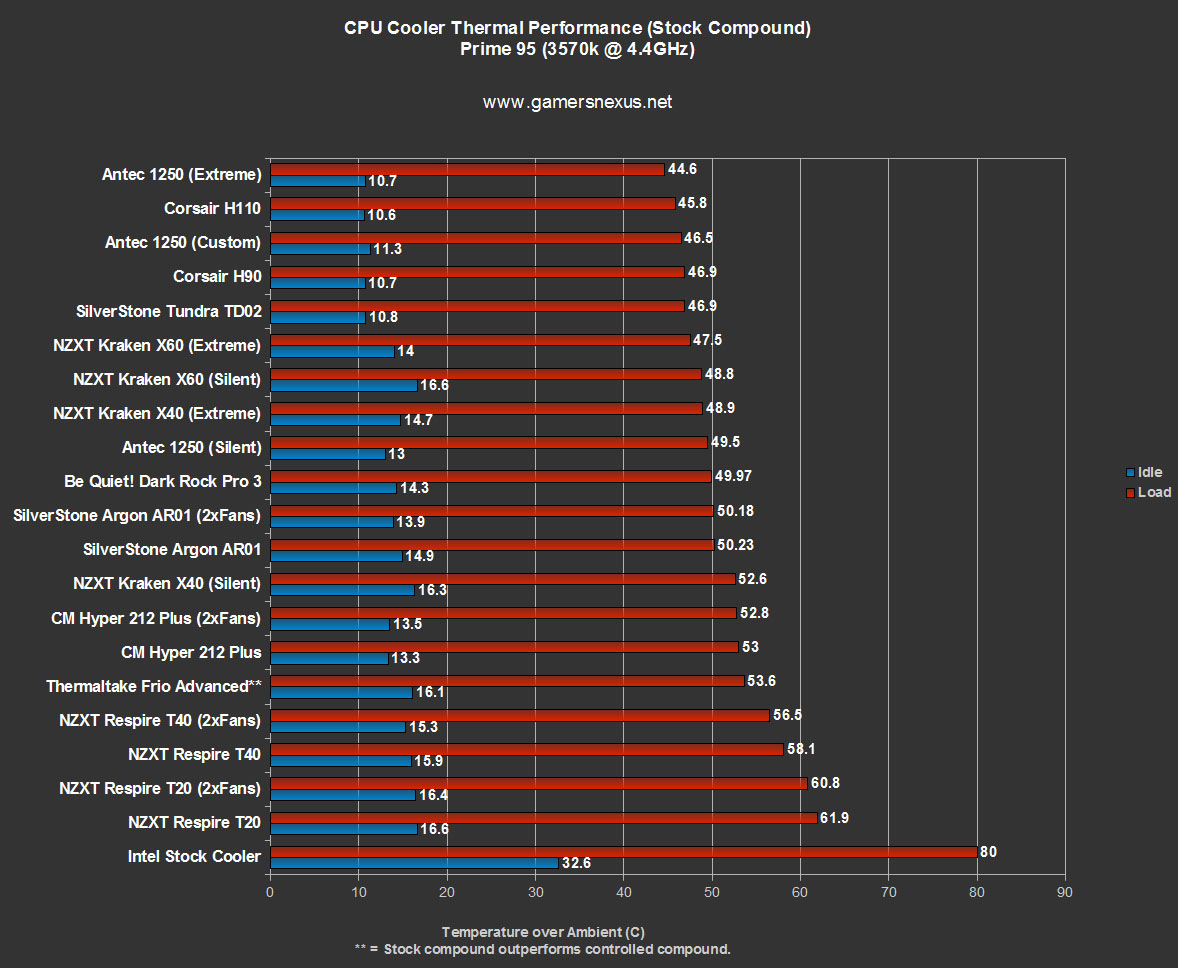 Here's the controlled test. Performance is marginally better, but there aren't phenomenal gains. At 49.97C load, the DRP3 lands just below the 1250 on silent, X40 on extreme, and above all air coolers.

Conclusion - is the Dark Rock Pro 3 Worth It?

We unfortunately don't have a decibel testing rig established for this bench (but the next one will be prepped for this), so discussing noise levels is purely subjective at the moment. I will note that the DRP3 remains true to its brand name; the cooler is significantly quieter than the liquid coolers when tested on extreme or "medium" (custom) settings. It tends to be louder than the 1250 on silent, though, and the 1250 runs cooler. The Argon AR01 has an annoying whine that hasn't yet subsided, and while it isn't loud, the DRP3 does beat it out in silence and just slightly in cooling. 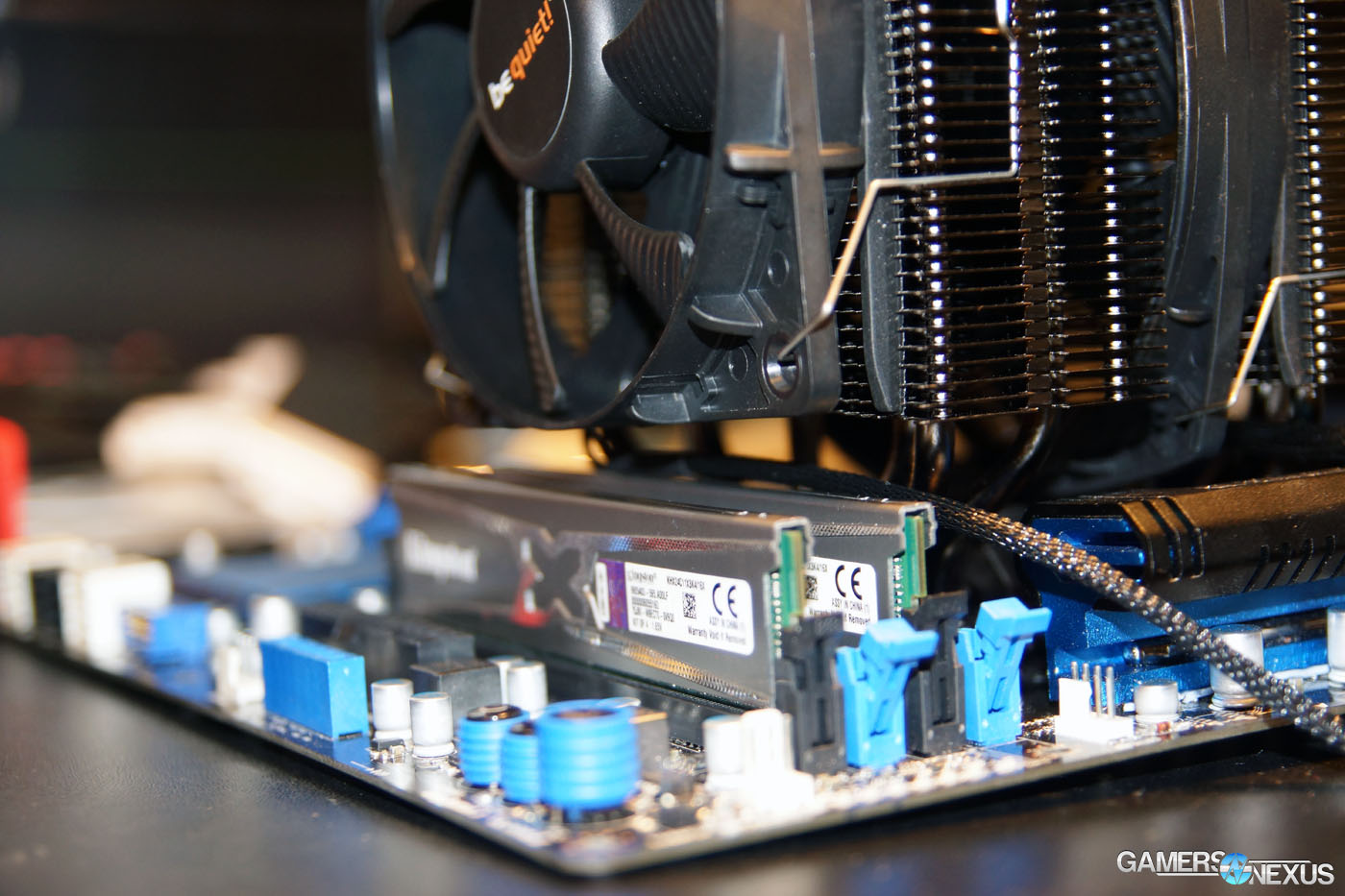 RAM clearance is a non-issue for the most part. Some heatsinks will be tight -- like Vengeance memory. You can move the fan to a higher position if so. 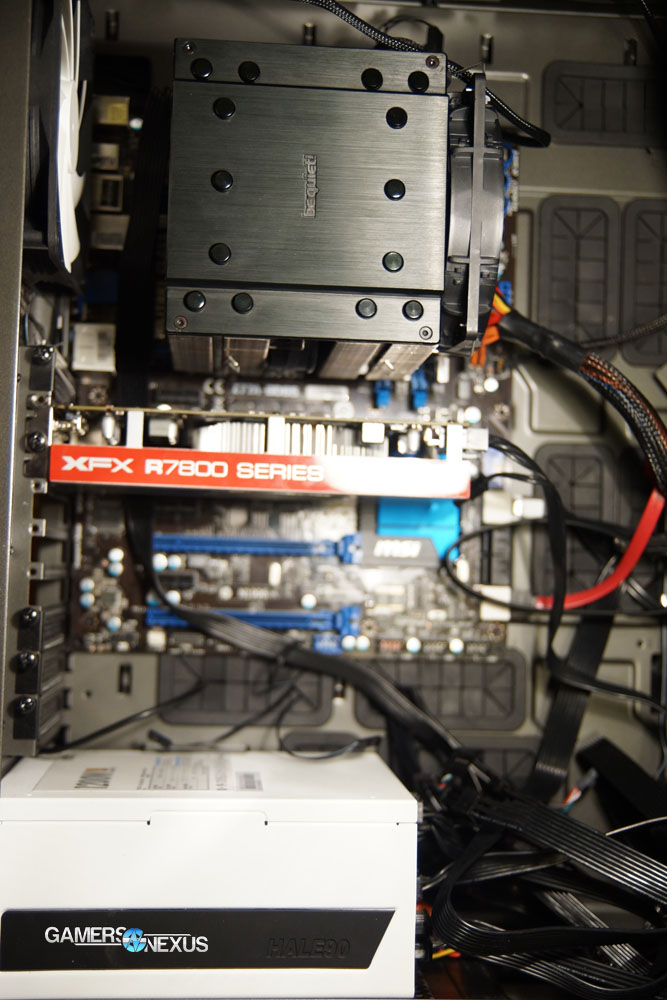 This shows just how huge the cooler is. Ignore cables -- they weren't managed yet as this was mid-installation. Massive cooler.

Realistically, at $110, you're paying for three things: Aesthetics, silence, and endurance. The Argon AR01 has effectively identical performance (within margin of test error) and is priced at around $30. If you just wanted the cooling without the massive cooling unit and could live with slightly louder volume, the Argon AR01 makes much more sense. That said, Be Quiet's Dark Rock Pro 3 is hands-down the most physically imposing, monolithic cooler we've ever tested; the Dark Rock Pro 3 is a work of art in its own right, making it a potential front-runner for enthusiast projects that demand a specific appearance. The DRP3 has effectively dethroned SilverStone's Argon AR01 as the best cooler on the bench, with Be Quiet! now laying claim to our "Best of Bench" award.

As for endurance, well, the bearings are rated for an impressive 300,000 hours -- more than the usable life of most systems.

At the price, though, it's not for everyone. You could grab a 240/280mm CLC at that cost -- probably an Antec 1250 ($100) (we reviewed this here) or NZXT X61 ($140) -- and achieve marginally better performance, reasonable silence (if not on 'extreme'), and the liquid appearance. Still, not everyone wants a liquid block in their configuration. If that's the case for you and you'd prefer a longer-lasting air unit at 300,000 hours, the DRP3 makes the best sense.