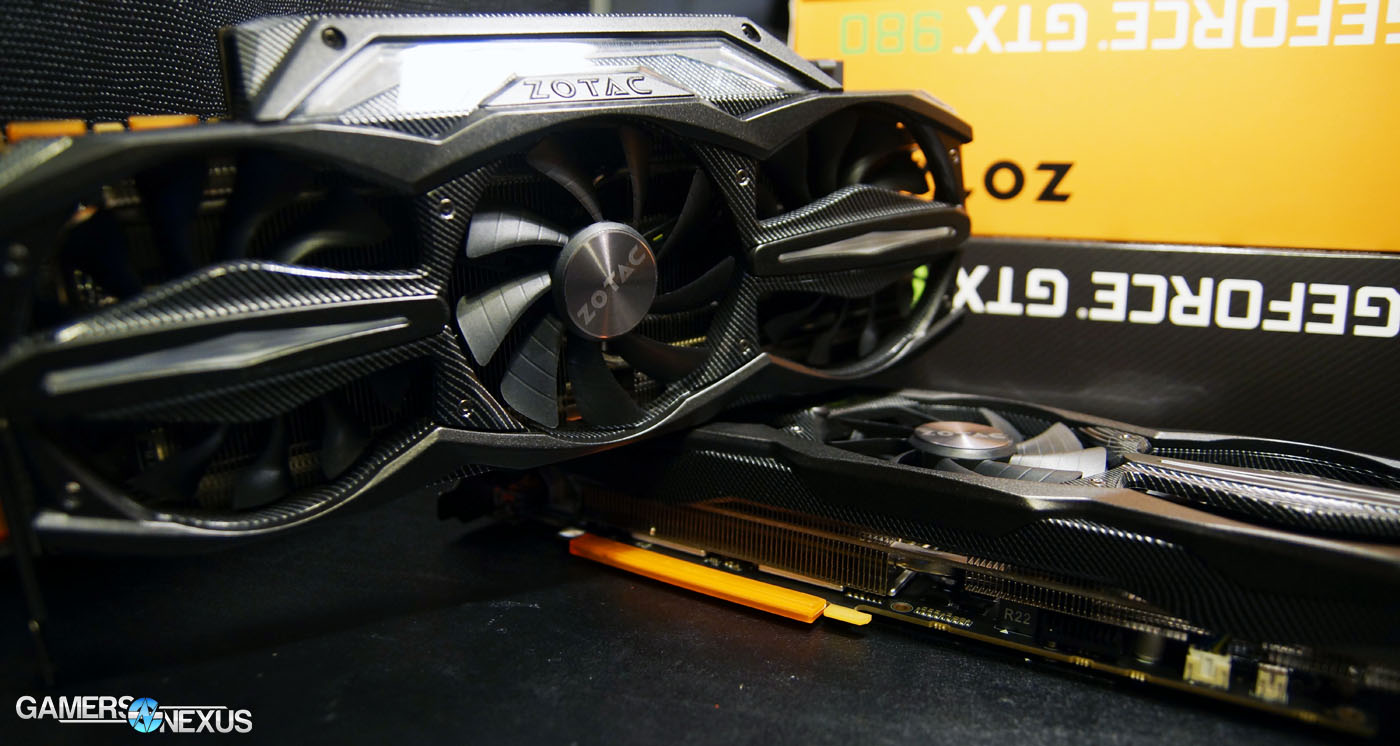 But that's jumping the gun. Our introductions are normally a bit more gradual. The GTX 980 Extreme was unveiled to us at Game24, where we filmed our first hands-on with the 970 version of the product. The Extreme is being made in limited quantity and at higher cost to the consumer, specifically with an emphasis on a high overclocking ceiling and a legitimately impressive cooler. Zotac's GTX 980 Extreme was the video card slated to put the company on the map. The cooler, in theory, should be able to handle serious heat and allow for sufficient VRM cooling that high-voltage overclocks should be sustainable, especially with a hand-binned GM204 chip.

The video card also lists an MSRP of $610, matched against the reference GTX 980 (built by nVidia) pricing of $550. The same issues we'll detail herein cascade down the entire Zotac Omega and Extreme lineup, including the 1.212v cap problem. The GTX 970 does not escape Zotac's engineering failures unless purchasing the unmodified reference model built by nVidia.

On paper, the GTX 980 Extreme is an appealing card. The base clock of the device starts us a bit higher than reference – 1291MHz vs. 1126MHz – but the rest of the specs are mostly the same. The memory clock is bumped up to 7200MHz stock, a 190MHz gain over the reference 7010MHz clock.

But a higher base clock doesn't really mean anything. It means that it'll sell better to users who are doing a numbers-vs-numbers comparison between cards on retail sites, I suppose, but that's about it. A lower clock gives more room for overclockers to play and fine-tune, anyway, so it's really unnecessary if purchasing the card with overclocking in mind.

The rest of the specs are in-line with what nVidia's reference lists – except some hidden elements.

Zotac uses a lot of marketing terminology that gets confusing to enumerate. There's IceStorm, FireStorm, OC Plus (OC+), Power Boost, and Exo Armor. Because this doesn't tell you anything useful, here's the break-down:

IceStorm: Zotac's aftermarket cooling solution (see competing ACX, Twin Frozr, etc.). IceStorm uses a triple-fan design, built around a single, central intake fan with two flanking exhaust fans. The exhaust fans ensure that the air is pulled through the heatsink and pushed out of the card to allow more rapid thermal dissipation. Out of all the aspects of the card, this is the one that we were most excited by; the cooler's design is legitimately promising and should allow a high overclock on air, if the rest of the card measured up.

FireStorm: Zotac's custom, very buggy software. Unfortunately, as you'll find out shortly, it's a requirement that overclockers use FireStorm to unlock overvolting properly; in this regard, FireStorm acts like DRM. It has a very “uPlay” feel to it, and not in a good way (is there a good way?).

OC Plus: This is Zotac's version of what you've possibly seen other manufacturers do. Zotac has its own PWM installed to the custom PCB (the root of many problems we'll discuss later). This connects to OC Plus, which is a USB-attached module on the video card that feeds into USB power on the motherboard – the same place you'd connect front panel USB2.0 headers. Without this connected, we lose some control and access to voltage regulation. Note that even with OC Plus connected, voltage is still limited heavily and demands FireStorm for access to what little headroom we have to play.

Power Boost: An up-marketed name for solid capacitors, covered with a metal plate and lettering that aligns upside-down when the video card is mounted in the board.

Exo Armor: This is just a backplate. Unlike the reference design, there is no ability to remove chunks of the backplate to allow better airflow in SLI configurations. The backplate has a nifty carbon fiber look to it, though.

I suppose I'll take a moment to point out Zotac's LED system, too. The card has green (idle) and red (load) LEDs that activate based upon GPU activity and demand. It's unfortunate that the LEDs only light downward and are not user-changeable to different colors, but that's a small gripe when matched to the looming concerns. If nothing else, the LEDs can mercifully be disabled through FireStorm.

Page 2 dives into the backstory of why this card has disappointed us so greatly.