The above is a video overview of our Far Cry 4 benchmark course. Follow the same path to replicate our tests. The video shows Far Cry 4 at max settings (Ultra / “NVIDIA”) with soft shadows, HBAO+, and TXAA 4x at nearly 60FPS / 1080p. We have similar courses for Assassin's Creed and other games.

We ran an identical 120-second circuit in all games for the tests.

All tests were conducted three times for parity, each using a custom graphics benchmark course in each game. We used FRAPS' benchmark utility for real-time measurement of the framerate, then used FRAFS to analyze the 1% high, 1% low, min, max, and average FPS.

The system was kept in a constant thermal environment (21C - 22C at all times) while under test. If present, all case fans were set to 100% speed and automated fan control settings were disabled for purposes of test consistency and thermal stability.

There's no two ways about it: The Syber Vapor Xtreme is capable of playing every game we've thrown at it on near-max settings at 1080p. The box will scale to 1440p with relative ease, though a GTX 980 is not necessarily capable of 4K gaming for the vast majority of titles.

Metro: Last Light on max settings (including AA, 16x AF, and very high tessellation) ran cleanly at 50FPS – easily boosted to 86 FPS by disabling AA and lowering AF – proving the resilience of the hardware. GRID sped along at 111FPS, with the poorly-optimized Assassin's Creed Unity operating at a fairly playable 52FPS with Ultra High settings.

For those who've kept up with benchmarks of the GTX 980 (and 4790K), these really aren't surprising numbers. It's doing what we'd expect a flagship GPU to do. The charts boil down to this: It'll play everything you want on 1080p at ultra or very high settings.

There are obvious concerns when cramming so much high-powered hardware into a tiny box. Laptop makers have battled these issues for years, but they've primarily limited heat output by using throttled-down components (this is becoming less true).

Using Prime95 LFFTs to benchmark CPU thermals, we exceeded TjMax (100C) in under 40 seconds, prompting a shutdown for safety reasons. The CPU operates more reasonably when “just” gaming (subtracting 22C ambient, it spanned 40-60C), but could seriously do with a better cooling solution. The GPU maxed-out at 58C (delta T over ambient) with automated fan control; it's warm, but not threatening to the life of the GPU. We'd recommend a custom fan curve to mitigate the effects, though it will make the system a bit louder when under intense load. 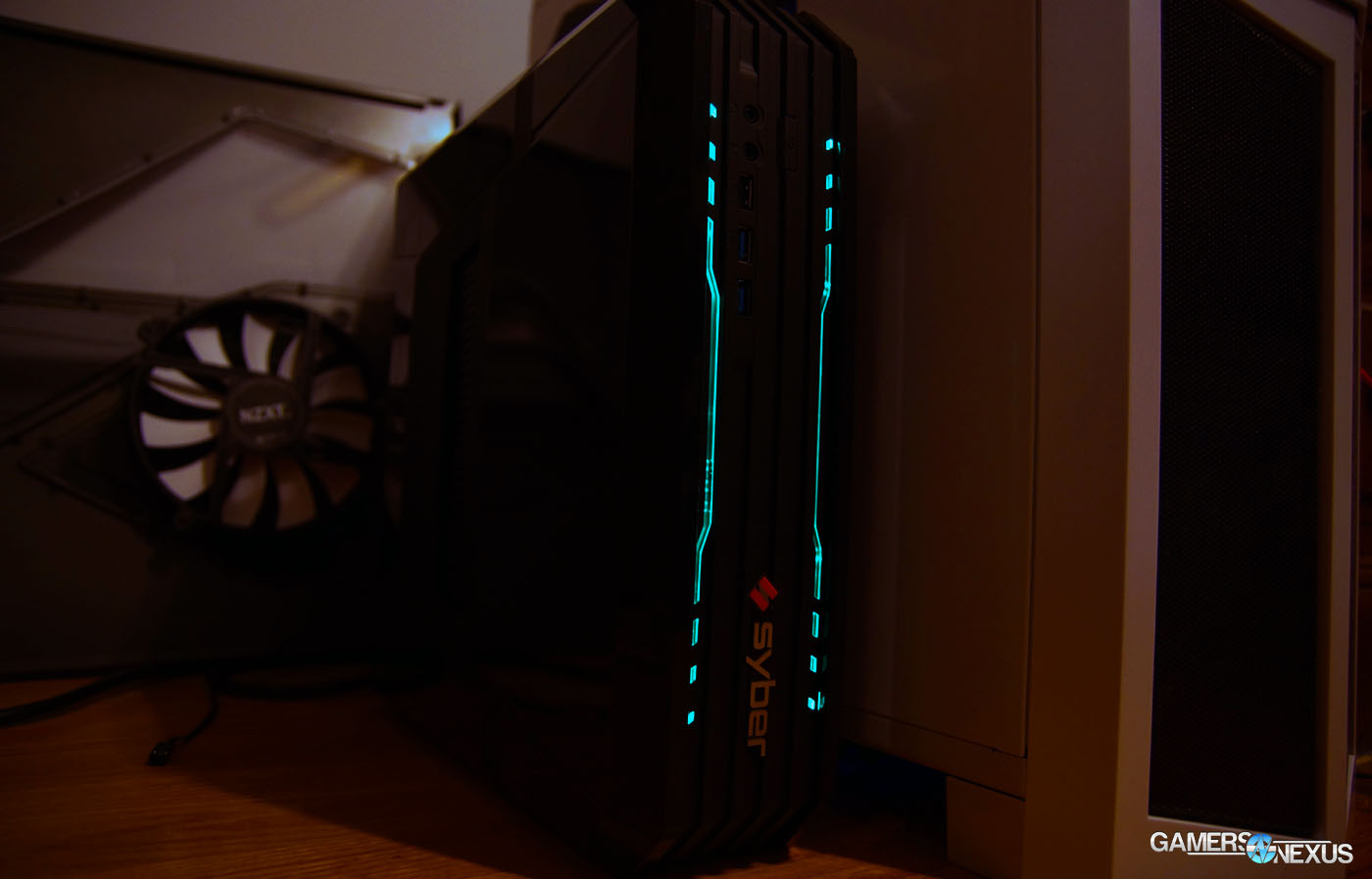 I've had limited personal, non-work experience with system integrators. I've always done it myself and have regularly questioned component choices and prices of system integrator builds. The Vapor Xtreme has broken some negative stereotypes I've held pertaining to SI pricing structure, given its accessibility and price vs. a DIY route. Not everyone wants to build a computer – especially one in a small form factor case – and so it's nice to have pre-built options available. Those options could be for gifting from non-gamers, for the lazy, for the time-limited, or just for peace of mind.

Would I still build it myself? Probably – and I'd imagine a lot of our regular readers would prefer that approach, too – but I don't think that detracts from the considerable value from the Vapor.

The $1500 Vapor Xtreme is capable of playing effectively every modern game at ultra settings (1080p), but runs a bit loud for the living room and gets questionably hot on the CPU side of things. Both of these issues would be resolved with a CPU cooler upgrade, just make sure it fits in the SFF case.

I find the lack of an SSD to be disappointing and somewhat confusing. With an i7-4790K and GTX 980 – more than $880 of hardware alone – and an HTPC focus, I struggle to understand justification beyond an attempt to hit the $1500 price-point. Honestly, I'd rather see the system priced at $1600 and offer an MX100 SSD in addition to the HDD; that'd be a more reasonable buy, in my opinion, and eliminates the need for a user to self-install the SSD. Once you've got the user getting their hands in the hardware, the pre-built factor begins to lose appeal.

These options aside, the high-end Vapor Xtreme is easily the best value and the most sensible, realistic PC build. Compared against competing system integrator options, CyberPower has managed to select components that (generally) make sense together. Impressive in its own right, the company has also managed to keep the system within arm's reach of an identical DIY build – a rarity among SIs – resulting in a system that feels higher quality without being outrageous. For buyers who don't want to DIY and would prefer a pre-built machine for living room gaming, the Syber Vapor Xtreme is one of the most reasonably-priced, high-performing pre-built options available. A few upgrades by the end user would make it perfect.

If the Vapor Xtreme had an aftermarket cooler and SSD, we'd be giving it an Editor's Choice award for price, build quality, cable management, and components selection.