ASUS' new GTX 960 Strix card will appear here on launch day, though we're not sure of the precise time. We're told that the quieter Strix 960 will retail for $210, meanwhile EVGA & Zotac will both offer day-one overclocking solutions for $200.

Because the GTX 960 can run at 30W when playing some games – DOTA 2 & LoL included – some manufacturers' cards will automatically power-down fans until a more demanding task is at hand. This reduces overall noise (to 0dB from the GPU) and power draw, but doesn't threaten the integrity of the GPU given the light workload.

The GTX 960 was tested using the latest NVIDIA GeForce drivers (347.25); all AMD devices were tested with the latest Catalyst Omega driver download. Tests were conducted using various games (listed below) and the synthetic 3D Mark benchmarking suite. FPS logging was performed with FRAPS and then analyzed with FRAFS; thermal and sensor monitoring was performed with GPU-Z.

All game and synthetic benchmarks were performed three times for parity, then averaged.

Game setting presets used during testing are identified by the title of the chart. Some settings are manually tweaked to allow for a more fair comparison between GPU vendors.

Unfortunately, despite requesting one, a Radeon R9 280 was not available for this benchmark.

In FPS and game benchmark performance testing, we used the following titles:

The system was kept in a constant thermal environment (21C - 22C at all times) while under test. 2x4GB memory modules were kept overclocked at 2133MHz. All case fans were set to 100% speed and automated fan control settings were disabled for purposes of test consistency and thermal stability. 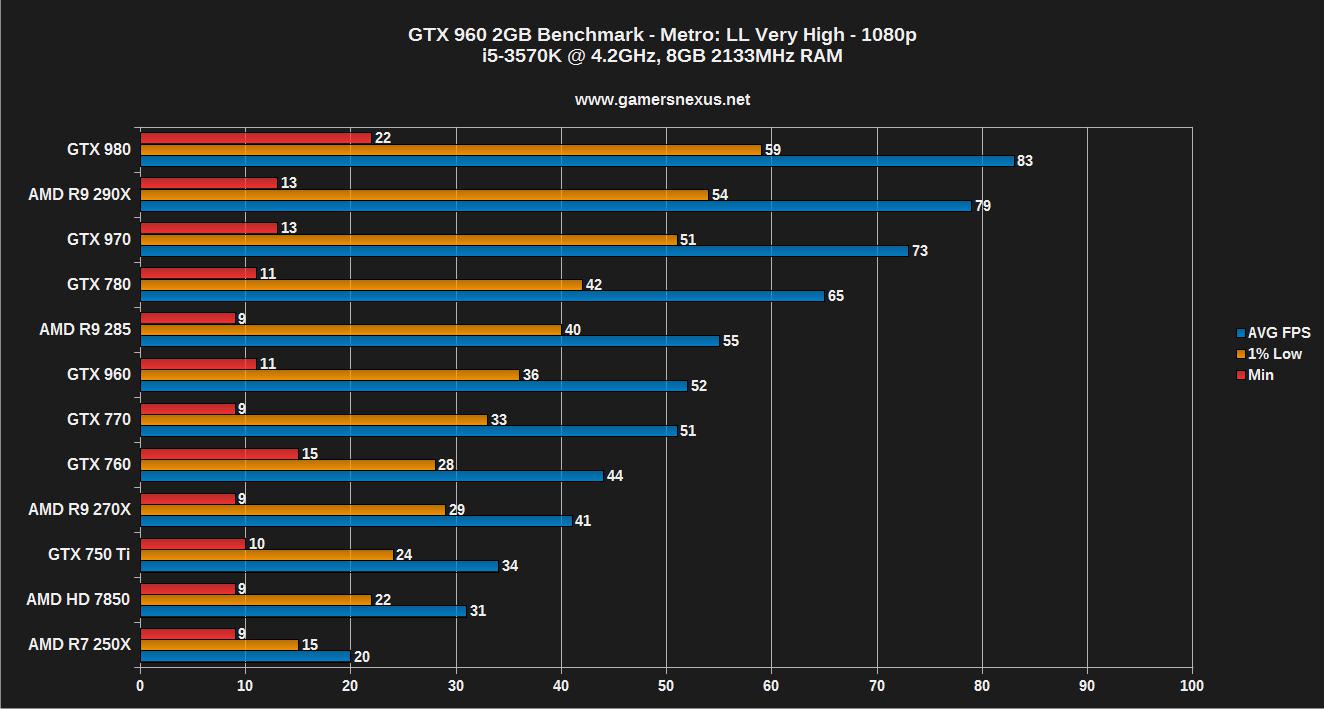 Metro: Last Light is one of the most consistent benchmarking utilities we've ever encountered. The ASUS GTX 960 Strix landed just below AMD's same-priced R9 285 ($210), which holds a 5.6% lead over the lower-TDP nVidia GPU. Performance was smooth and uninhibited by stuttering or noticeable frame tearing.

The GTX 960 sees roughly a 38% improvement over the previous-generation GTX 760 (now discontinued). The GeForce GTX 970 outperforms the GeForce GTX 960 by about 34% in this test. 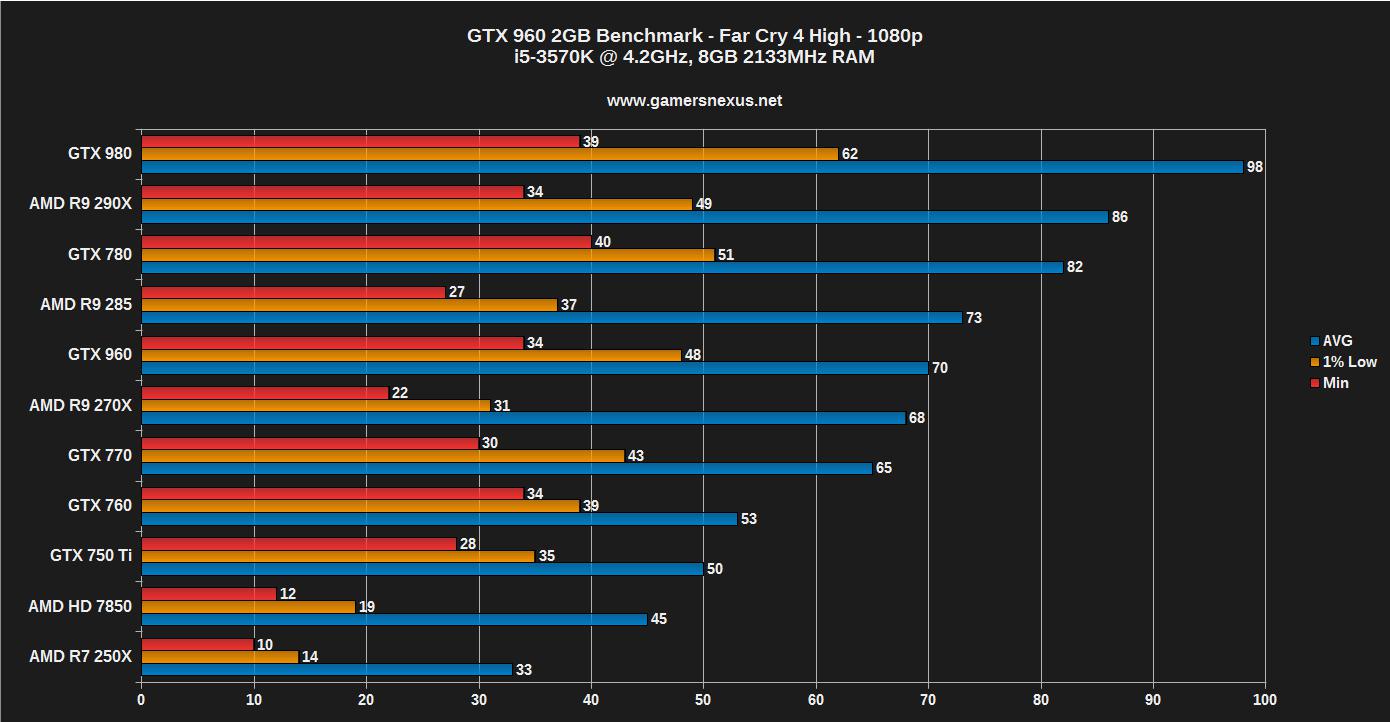 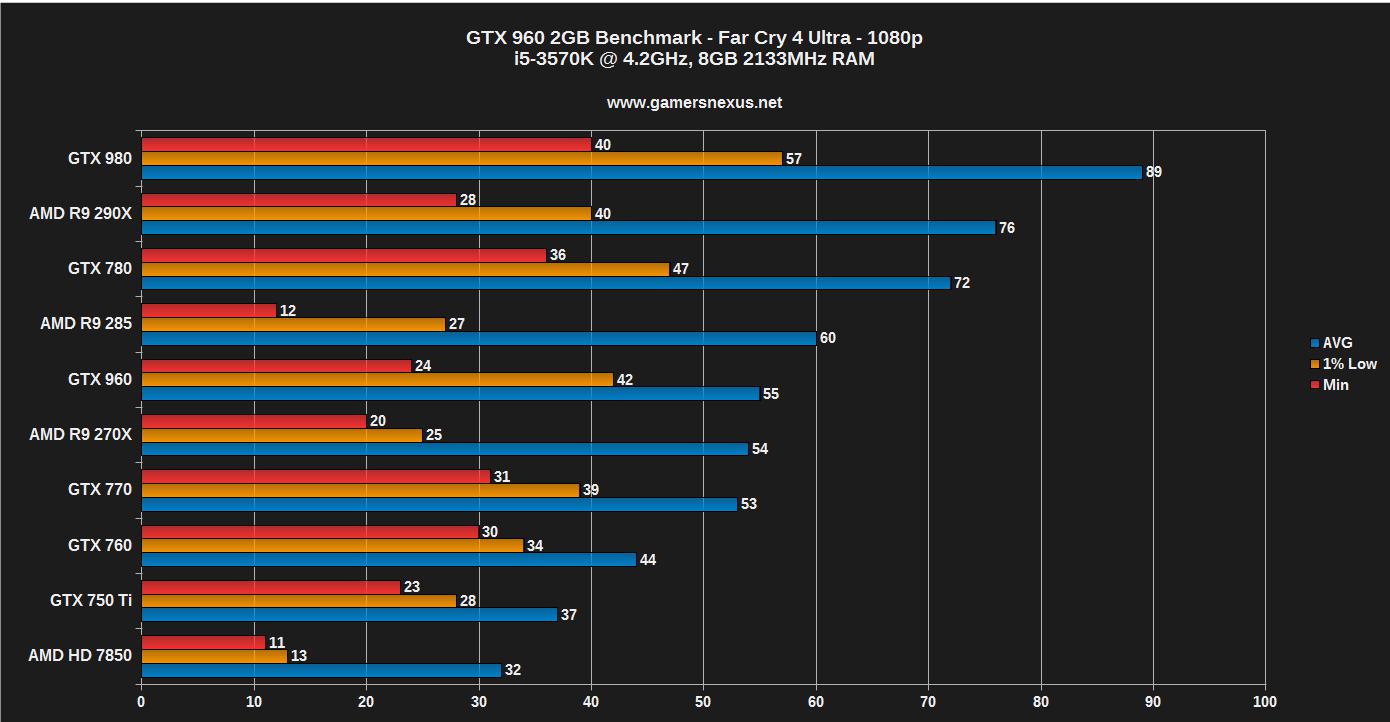 First, note that Far Cry 4 (PC) has improved substantially since our initial benchmark, which unrooted severe stuttering issues on some devices.

The GTX 960 is capable of playing Far Cry 4 on near-max (Ultra) settings with some tweaks, resulting in a 55FPS average output on ultra. The card sits around 70FPS on “high” settings, ensuring a more stable gameplay experience with fewer visible dips. 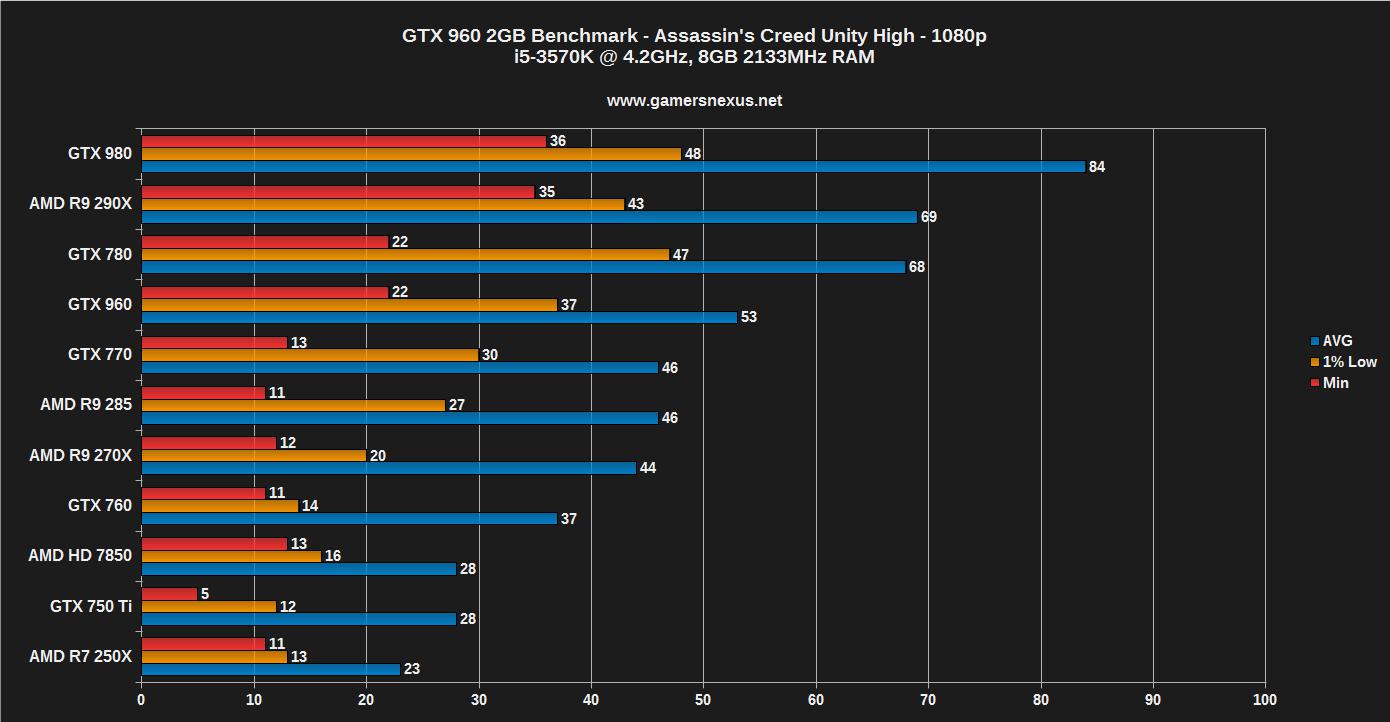 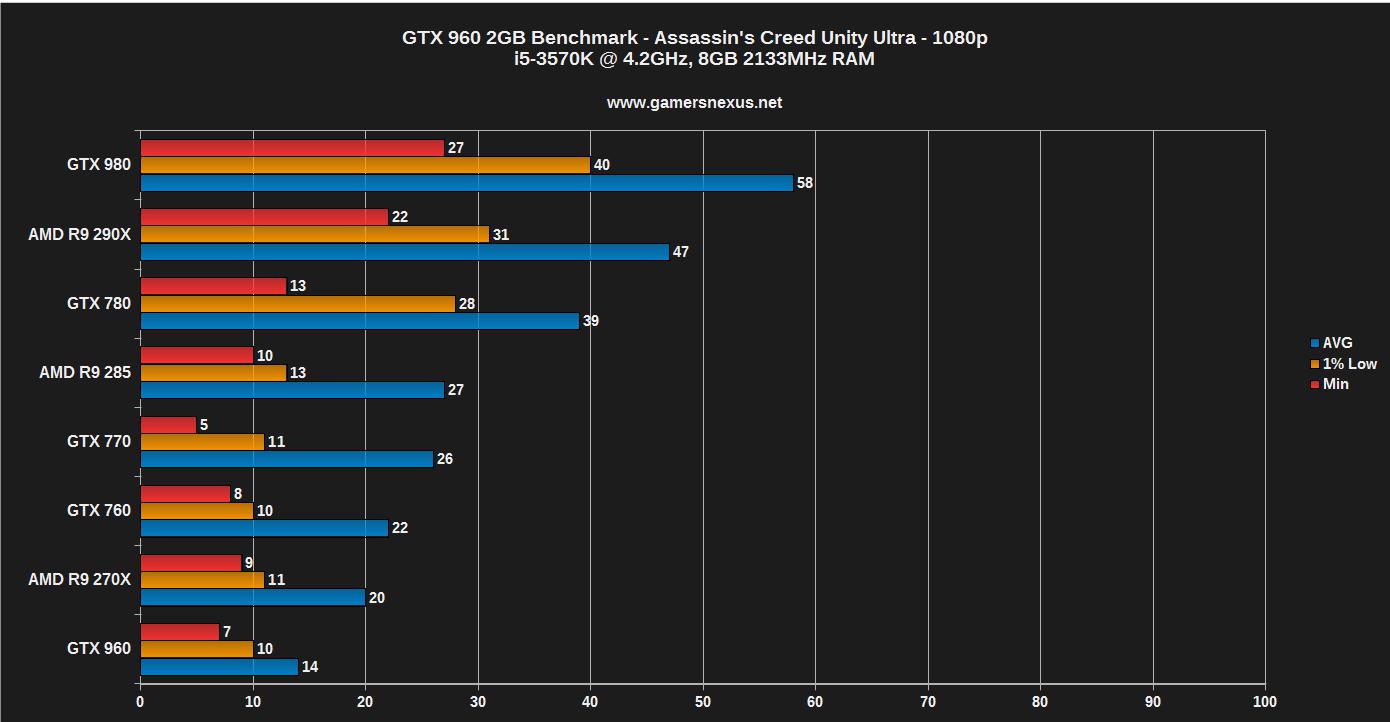 Assassin's Creed Unity nets a lead for the GTX 960 over its competing R9 285, with the GM206-powered card operating at 14.14% more frames per second. ACU was unplayable on Ultra settings, largely for VRAM reasons disclosed in our ACU benchmark.

Despite memory efficiency gains, nVidia's fault can be seen in the ACU tests; a GTX 760 outperforms the new 960 due to its wider memory bus and increased bandwidth. This is a real-world example of where a memory bus gets hammered -- especially given ACU's heavy use of VRAM (frequently exceeds 2GB if available). 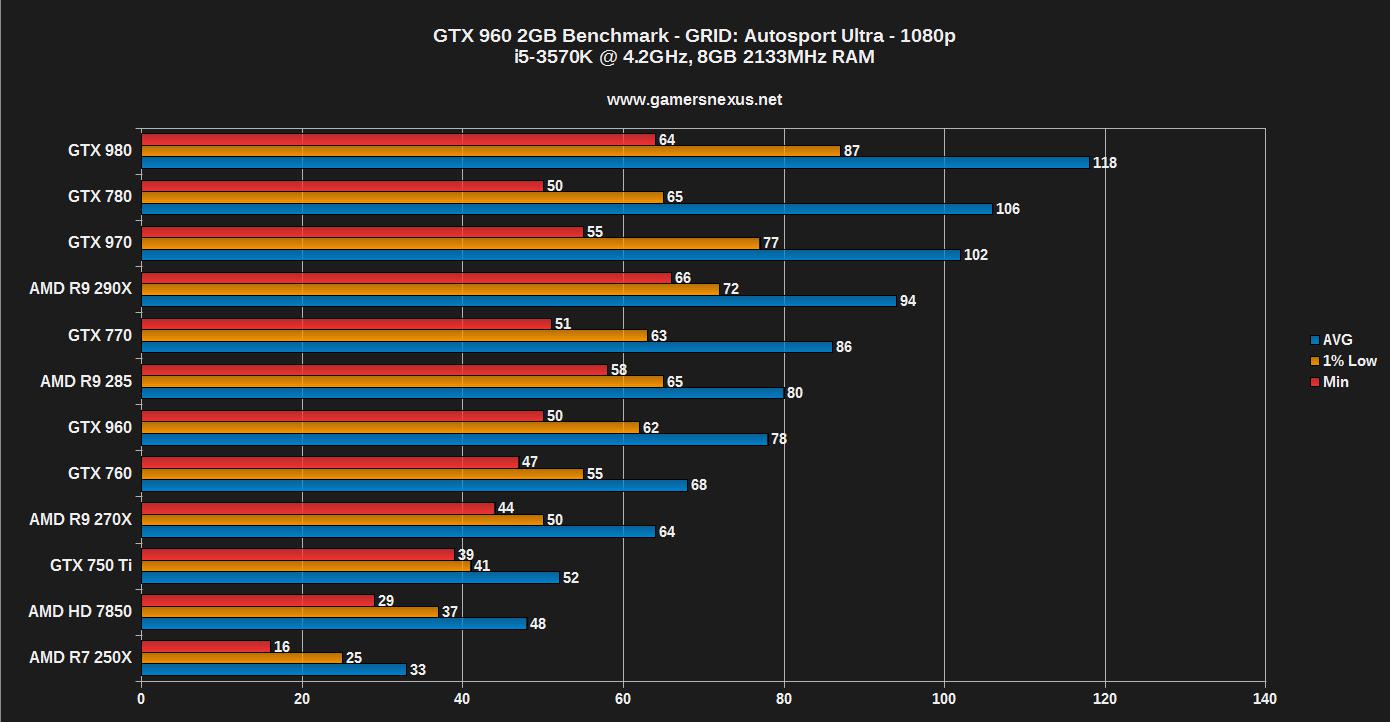 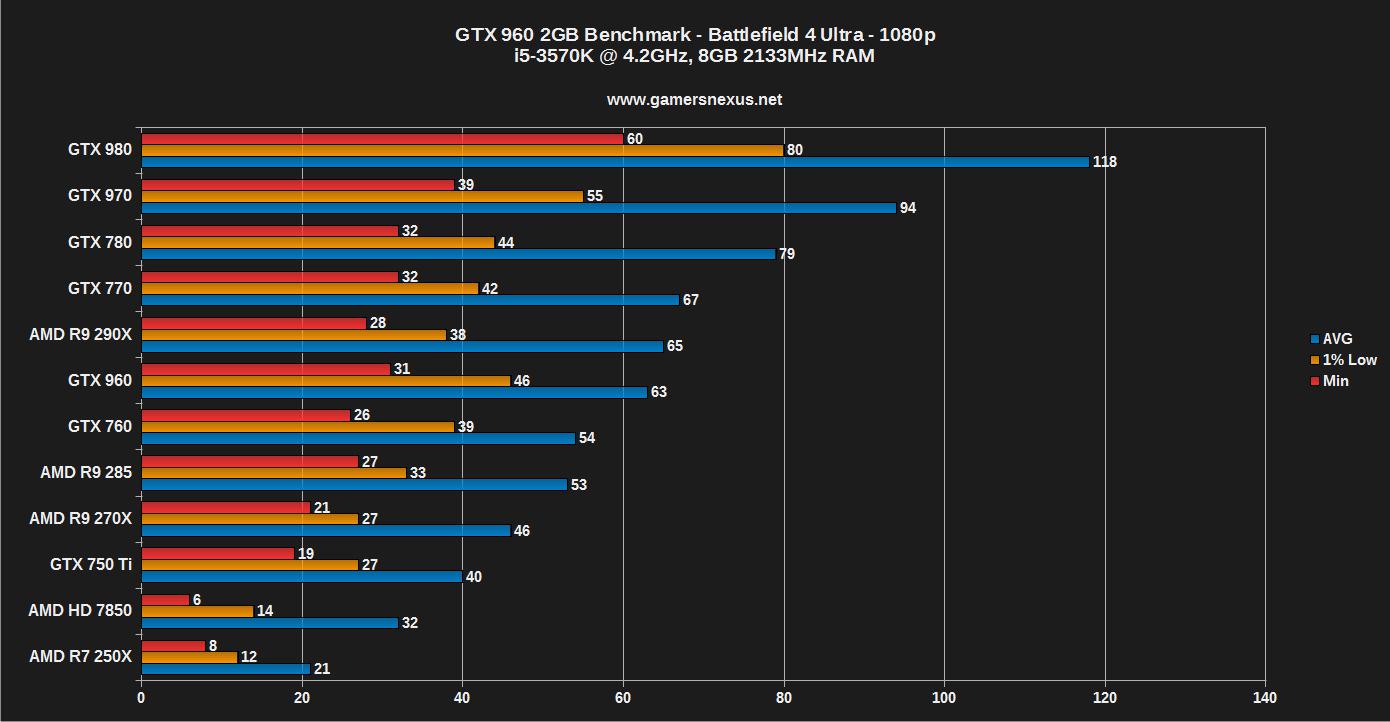 We recently benchmarked the EVOLVE beta, throwing in the GTX 960 for good measure. Note that Evolve is not a complete title and has not received driver (or much software) optimization. This test is strictly representative of beta performance. 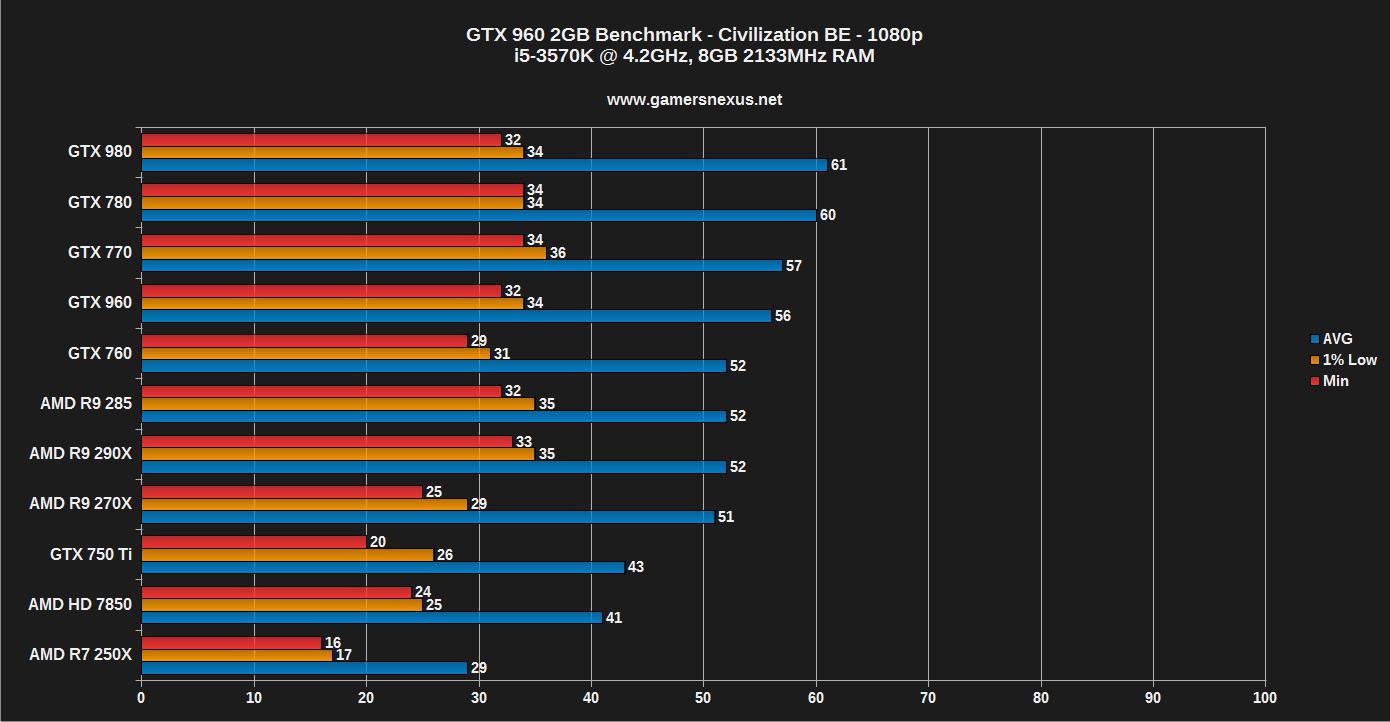 We'll be eliminating Civilization: BE from the test bed going forward, given the generally flat results. The differences showcased are insubstantial and generally not worth taking into consideration. Still, it's worth noting that the GTX 960 bested AMD in one of its optimized titles. 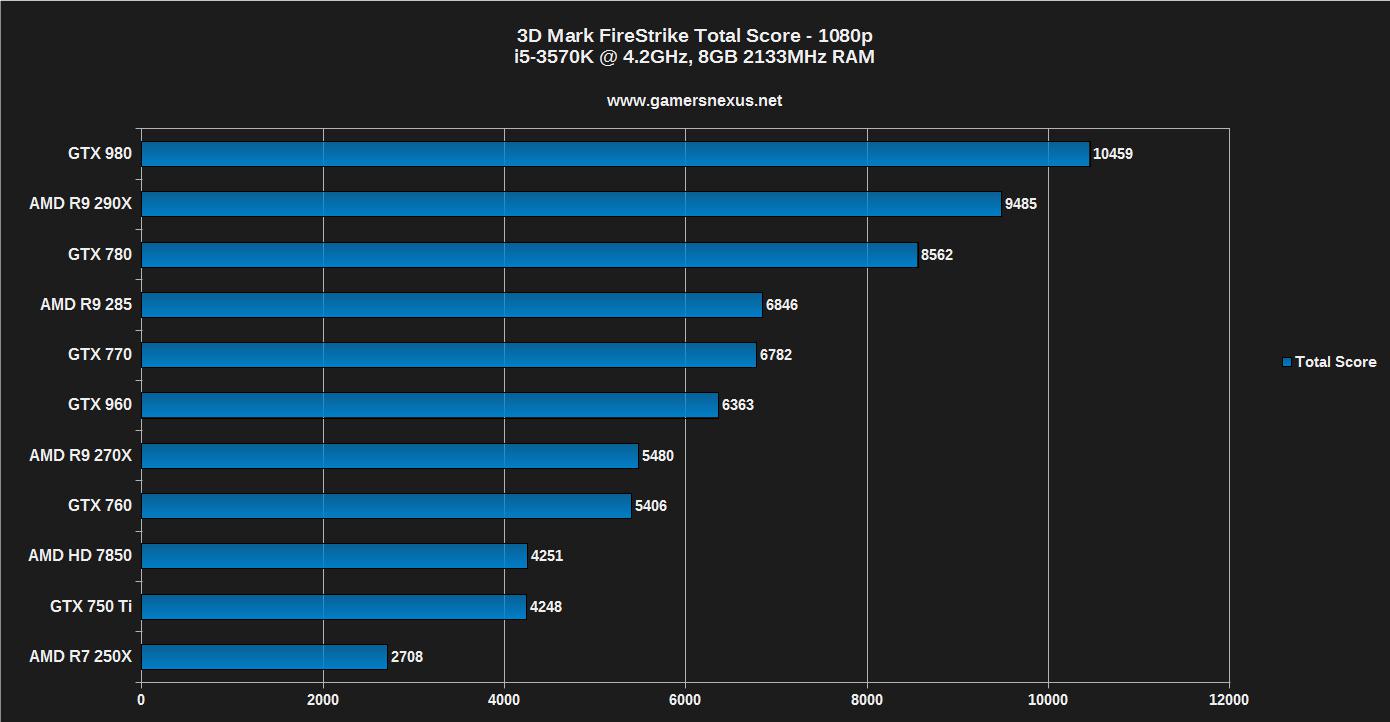 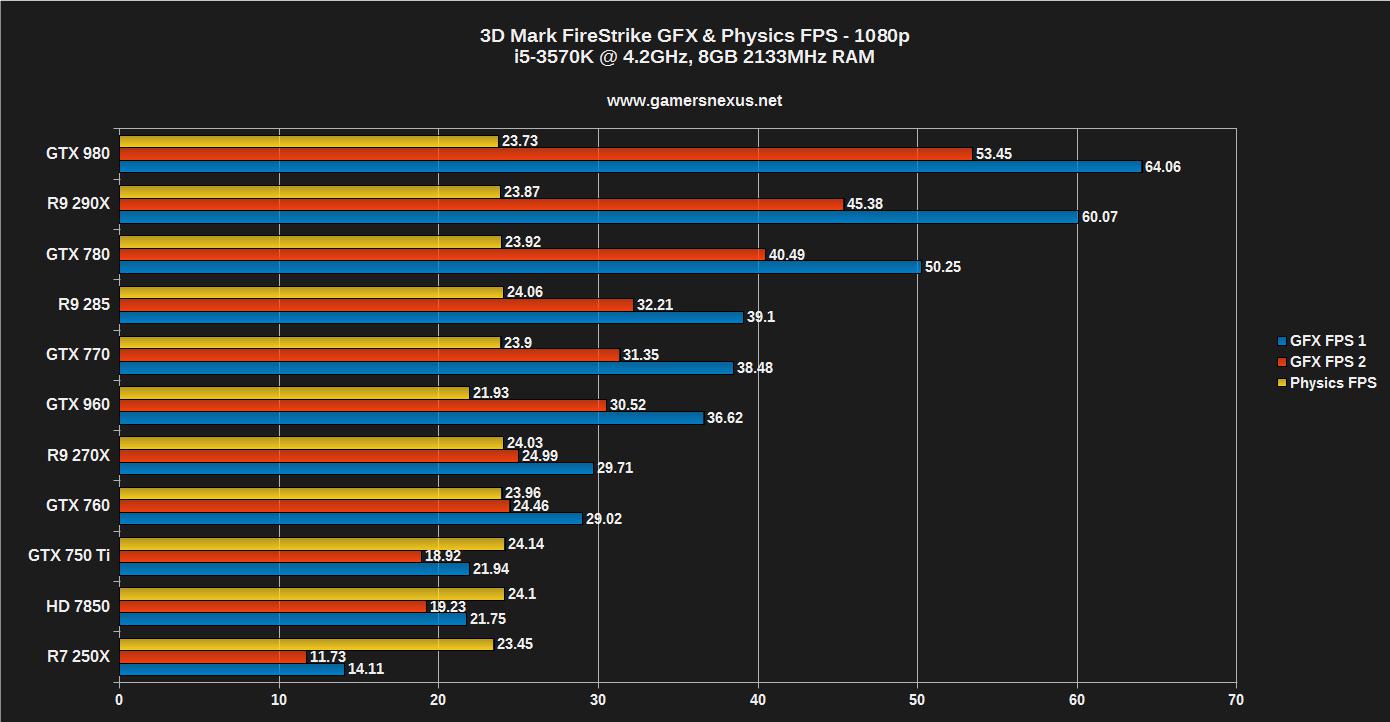 3D Mark scores are somewhat useless if you don't understand what goes into them. Below is a chart showing the calculated score (an amalgamation of FPS results across various graphics and physics benchmarks), followed by a chart showing individual framerates for different test segments.

Note that AMD's devices tend to excel in the synthetic physics arena due to greater COMPUTE power. 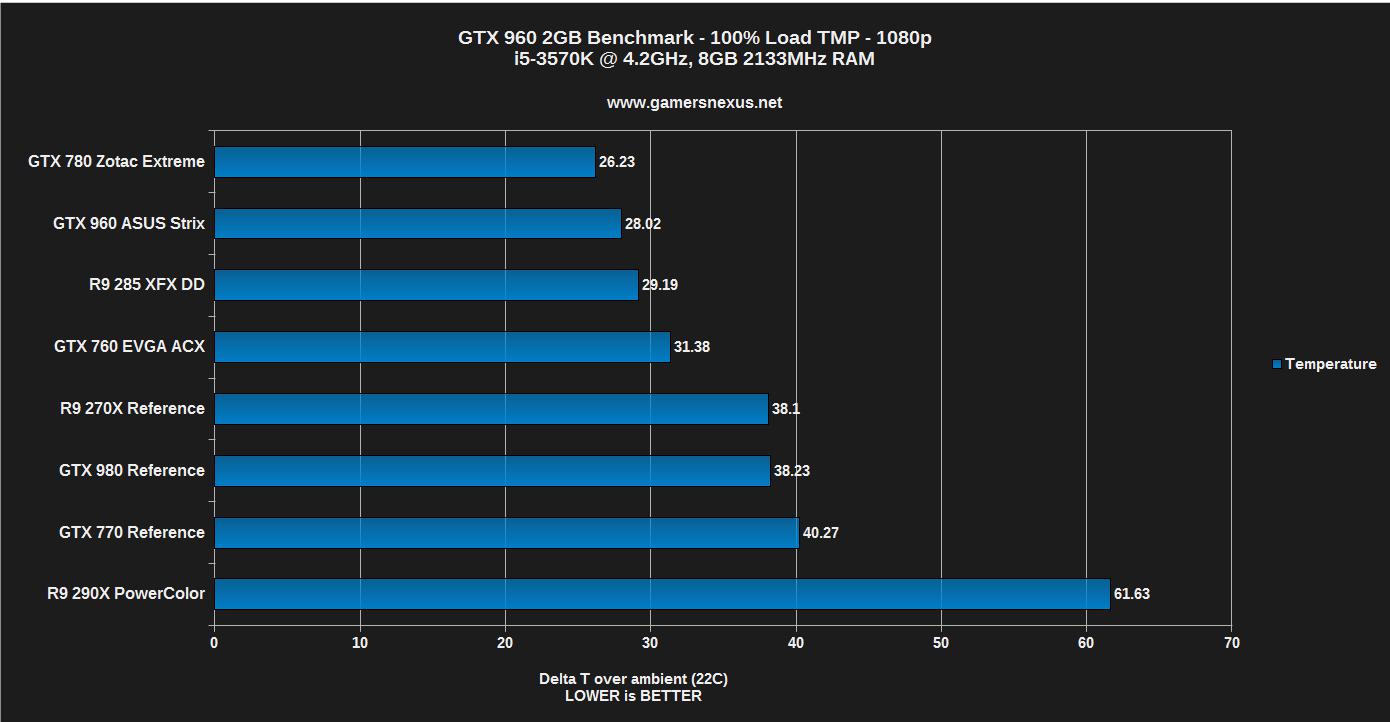 Under 100% real-world load (FireStrike Extreme), ASUS' Strix cooler on the GTX 960 results in one of the coolest temperatures on our bench, only behind a 3-fan GTX 780 from ZOTAC. These results hinge heavily upon the cooler, so reference devices will almost always be hotter than aftermarket units. You can't extrapolate all GTX 960 cards' temperature metrics from this chart – it is representative only of the Strix variant.

The R9 285 is effectively tied with the GTX 960 when rounding-up all the results. It's a slightly more capable card in terms of raw performance, but at 190W TDP against nVidia's 120W TDP, the same price, and with worse software support, it's becoming a difficult recommendation.

If AMD were reading this, they'd tell us what they always do: “The difference between the GTX 980 and the R9 290X is about $5 a year [on your energy bill].” True – the power bill isn't that big – but in a time when small form factor boxes and home-theater PCs are growing in popularity, and as gamers realize that rigs no longer need to double as space-heaters, the TDP argument becomes more relevant. It's not just energy cost – it's the endurance and thermals of the entire system. The GPU can heat up all surrounding components, and unarguably will when in a small enclosure like the RVZ02, so it's important to pay attention to wattage demands.

Still, a great many gamers still prefer performance output over a few more watts saved. In these instances, we must divert our attention to FPS and then driver / software support. In the case of FPS, the R9 285 wins-out in a few titles, but not all; it's a blow-for-blow trade, but if you're just after every single frame you can get, it's an overall safer bet for some games. In the case of software, GFE and ShadowPlay are extremely easy to use and update with greater regularity than Catalyst and Gaming Evolved (which offers GVR, a ShadowPlay competitor we benchmarked).

And that's the other thing – GPUs can often make tremendous gains with driver updates, so ultimately, these two could trade places as AMD and nVidia continue to iterate drivers.

AMD reached out to us earlier this week with a somewhat aggressive approach to marketing – something that the two goliaths aren't foreign to – stating directly that “newer isn't always better.” In the email, the company goes on to encourage consideration of the R9 280 (sadly, we were unable to secure a sample in time) when reviewing the GTX 960. AMD specifically pointed-out the 128-bit memory interface against the R9 280's (and 285's) 256-bit interface, then emphasized the importance of a wider memory interface when playing games at 4K resolutions.

This accuracy granted, an R9 280 and GTX 960 are both incapable of playing anything high-end at 4K. AMD understands this, though, and uses DOTA2, LoL, and CSGO as examples of games that would benefit from 4K resolutions on an R9 280. Each of these games is more competitive in nature and experiences the phenomenon of players running intentionally dropped settings for the best competitive ability, so perhaps they're not the best choices – but we get the idea.

Note one important item we don't demonstrate in our charts: Although the GTX 960 and R9 285 are neck-and-neck in many cases, the R9 285 will outperform the GTX 960 in higher resolution use cases, like 1440p displays. We generally wouldn't recommend either card in such a scenario, but the 285 would perform better in general than the 960 in this instance. The 960 is definitely built for 1080p gaming and would struggle outside of that territory; we would not recommend the 960 at higher than native display resolutions of 1080p.

Although the 280X wasn't on our bench, it makes for an easy choice for gamers who care less about the power argument and favor raw framerate outputs (and have a few bucks extra to spend). Low TDP only goes so far -- there's still something to be said for a device that can drive graphics at an affordable price.

At the end of the day, it's as simple as this: AMD and nVidia are both incredibly strong contenders and have a highly competitive, somewhat entertaining tit-for-tat nature about them. It has gotten to a point that the bickering from either side is more directed in press events, something that's been exaggerated as nVidia has continued to threaten AMD's long-standing budget-class dominance. Up until today, you either bought a GTX 750 Ti or an R9 270 at the low-end, a 280 or 285 for the ~$180 range, or a GTX 970 after that. There haven't been worthwhile nVidia cards in the $150 to $300 price-range, given the generational gap, and that left an entire suite of relatively high-performing AMD devices as the only viable options. AMD still has a greater spread over the $100 to $250 market, largely due to its potentially overwhelming amount of options, but that grip is being threatened by the GTX 960.

As for the new gap that has developed – the $200 to ~$330 range – well, that looks wide enough for a Ti of some sort. Presently, AMD's R9 290 can be had for just around $260 and handily outperforms the GTX 960; we don't expect that to last forever, knowing how the two battle one another.

Strictly looking at the GTX 960 and ignoring the meta game: nVidia's new venture exhibits impressively low power consumption, is compact, affordable, and highly competitive in performance. The 960 is an easy choice for higher-end HTPCs with a thermal or power draw concern, and even outperforms the GTX 770 in some games. For desktops, the GTX 960 ($200) should be strongly considered when building a new mid-range gaming PC, right alongside AMD's embattled R9 285 ($210) and 280 ($170); the power, thermal, and software argument presently favors nVidia, though AMD still loosely holds onto higher framerates in many cases. NVidia's GTX 960 shows its memory bus limits in the ACU tests, where the GTX 760 is able to edge-out nVidia's new GPU thanks to its wider memory bus and increased bandwidth. Despite the efficiency gains, a wider bus would certainly have benefitted the GTX 960. The R9 280X makes for a solid high-performer compared to the rest of the lot, though it costs a bit more at ~$220-$250.

It's ultimately the user's experience that matters most, so take special build requirements into account (are thermals or power draw relevant for your build?) and then choose accordingly.