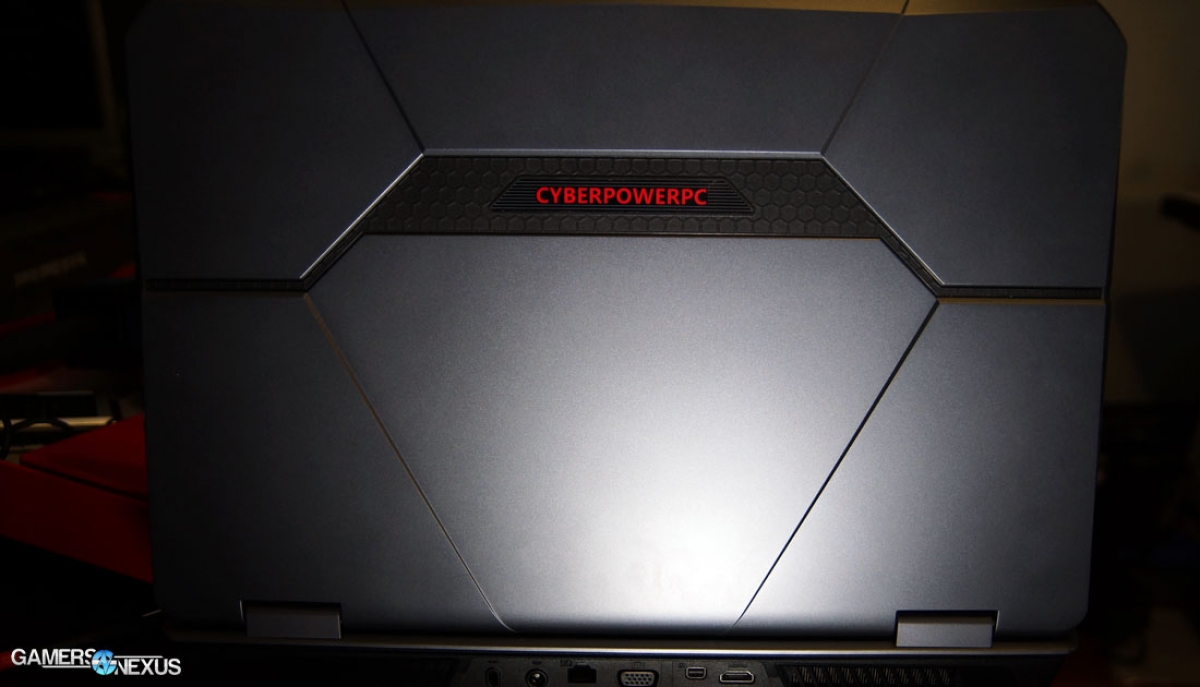 We looked at CyberPower's Fangbook III HX7-300, an exceedingly powerful gaming laptop equipped with a GTX 980M, i7 CPU, and 16GB of RAM. To this end, the Fangbook III HX7-300 is equal parts production rig as it is gaming machine, capable of hammering-out rendered videos faster than most desktops.

This review of the CyberPower Fangbook III HX7-300 benchmarks its gaming performance, battery life when gaming, the GTX 980M, and build quality.

CyberPower sells numerous variations of the “Fang” portable lineup, spanning impressive ultra-thin models to the 2.17” thick beast we're reviewing here. As with most competing laptops, use case scenarios vary based upon the model. The thicker, heavier models (like the HX7-300) aren't really meant to be moved around, a statement verified by the fact that they're generally regarded as “desktop replacements.”

The Fangbook III is equipped with a 17.3” 1080p display, making it immediately usable as a production or gaming rig with its quality screen. Of course, this also means it's not going anywhere quickly.

An i7-4710HQ and GTX 980M all but guarantee that most big-name titles will operate at max settings, or thereabouts. Shipping stock with a 128GB SSD and 1TB 7200RPM HDD (and the GTX 980M), the Fangbook III is significantly higher-powered than MSI's nearby GT70 (which is effectively the same laptop) and is priced about $200 more. 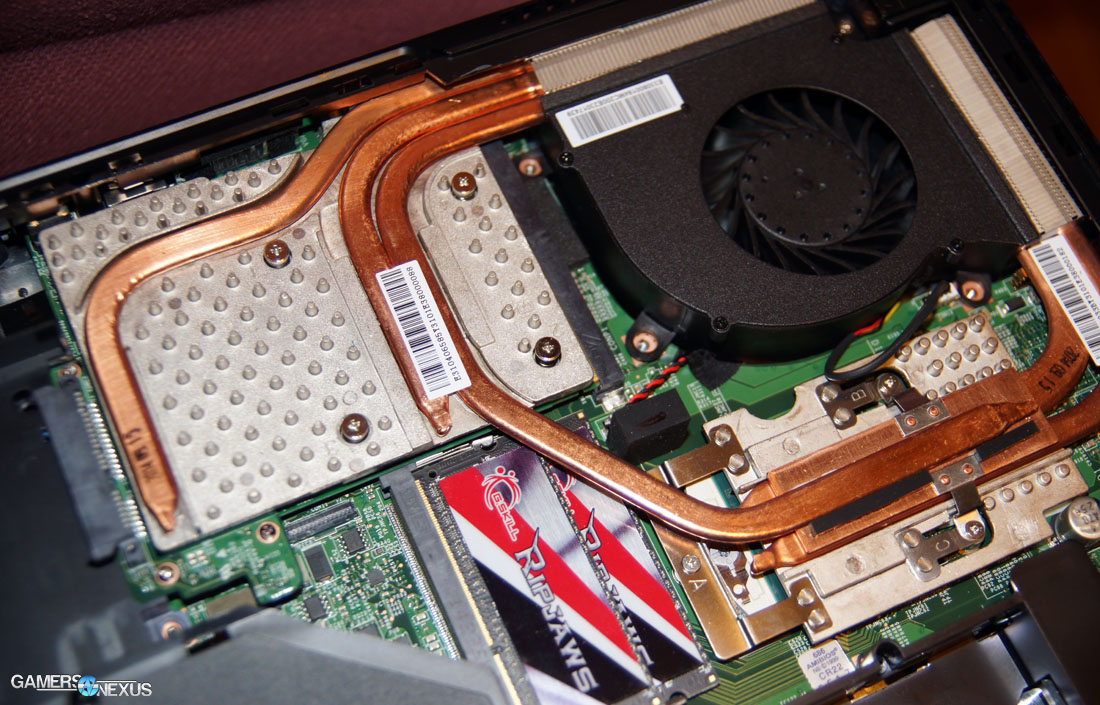 The tested Fangbook isn't light. It's nearly 8 pounds and uses a chassis that's about 17” wide. Most users will struggle to fit the laptop into a backpack, stifling some of the portability argument made by laptops. Ultimately, the Fangbook III is intended to be used as a “desktop replacement,” meaning that it's effectively stationary at home, but if need arose, it could be dragged-in to work or travel.

The chassis is overall high-quality, using thick, heavy-duty plastics that are generously ventilated. And the ventilation truly is generous – the GPU never exceeded 75C in our thermal testing, as you'll see in more detail below. A significant portion of the ventilation is on the bottom of the unit, where – upon removing the bottom panel – we reveal a massive aluminum and copper heatsink. This should immediately raise eyebrows among notebook maintenance veterans.

Unlike most laptops, the Fangbook III makes it easy for users to access the GPU & CPU cooling. It is extremely common for laptops to exhibit inhibiting overheating issues as they age, almost guaranteeing that users will eventually need to open up the unit and refresh the thermalpaste and fan bearings. In the case of most laptops I've worked with – hundreds, at this point – it is often necessary to remove the bottom panel, then the keyboard, the chassis, and a protection plate on the top-side of the laptop in order to access core components. To have access to RAM, the GPU, CPU, cooling fan, and SSD all under one panel (totaling eight screws) is a massive upside for ongoing maintenance. More laptops should do what the Fangbook III does.

The fan intakes from the side of the unit, funneling air over the copper heatpipes and heatsinks. Hot air escapes the unit from the bottom, which means this laptop should always be used on a flat, solid surface. CyberPower's fan does get somewhat annoyingly loud when under heavier gaming loads, but this would be less of a concern if using a headset when gaming. 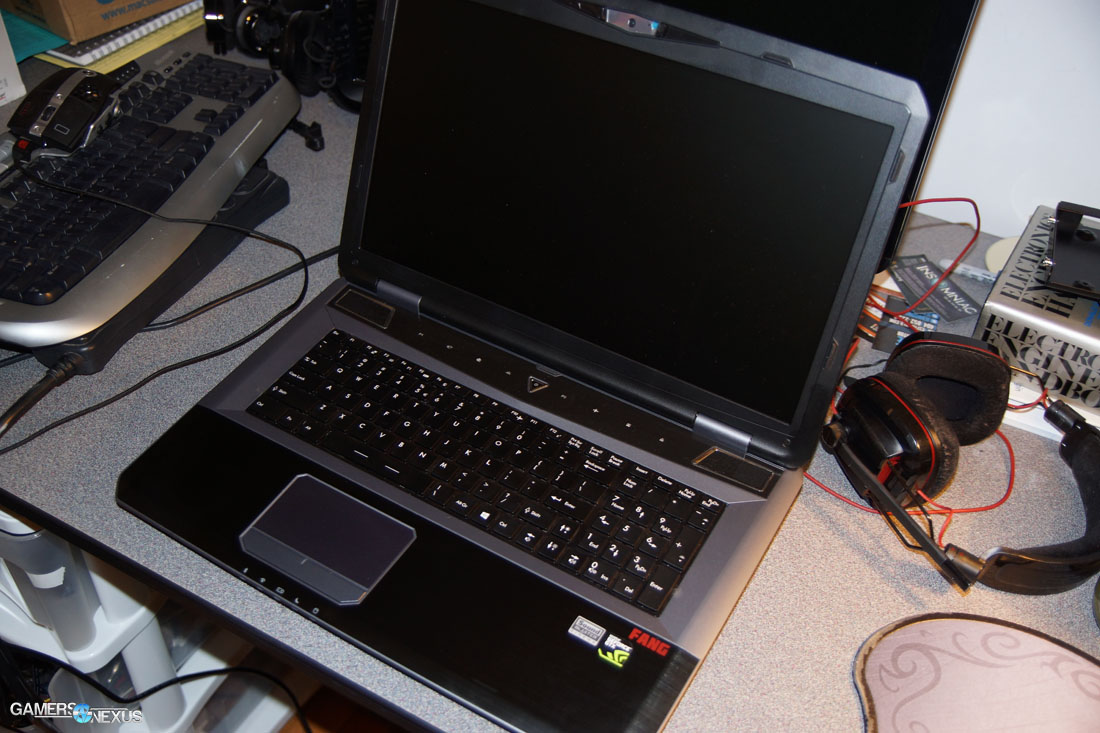 The Fangbook uses a 17.3” FHD LED-backlit display, operating at a native 1920x1080 resolution. The display is non-glossy and doesn't exhibit some of the glare issues we've seen in other consumer-grade laptops. The display is large enough that it allows for work productivity, but this is also the bane of the Fangbook's portability. Whether that tradeoff is worthwhile is subject to your needs.

As expected with a GTX 980M, graphics output in-game is almost always toward the “max settings” end of the spectrum. We had frame tearing issues with Far Cry 4, but everything else played fluidly. The Far Cry 4 tearing isn't too much of a surprise, unfortunately, and is more a fault of Ubisoft than anyone else.

Audio quality on laptops is generally hit-or-miss, with many of the units I've used (like the ASUS BAL line) delivering painfully underpowered speaker output that borders inaudible. The Fangbook III produces impressively loud audio with high-quality output, using two large Dynaudio speakers top-side and a subwoofer on the bottom of the laptop. Because of this, the Fangbook offers one of the best stock audio experiences I've observed in a laptop.

For testing battery life, we set GRID: Autosport's benchmark to run on loop and disconnected the AC adapter. The time at which the system entered sleep (from low battery) was logged, then we used simple math to extract the battery life.

All FPS tests were performed three times for parity. FRAPS was used to log FPS data in 30-second increments, then that data was dissected with FRAFS. These tests were conducted with AC connected and disconnected, split into separate charts below.

The 980M blows away other mobile competitors, given the performance to TDP ratio. CyberPower's laptop is able to push GRID at 94FPS on Ultra with 4xMSAA, BF4 on Ultra at 96FPS, Evolve at 64FPS, FC4 at 66FPS, and Metro: Last Light at 59FPS (Very High). All of these settings are not just playable, they're nearly perfectly fluid.

Removing the AC adapter from the scenario, the GTX 980M is configured to only push enough frames per second to create a reasonable gaming experience (and nothing more). For this reason, FPS drops to a maximum of 30 in all titles when running on battery. 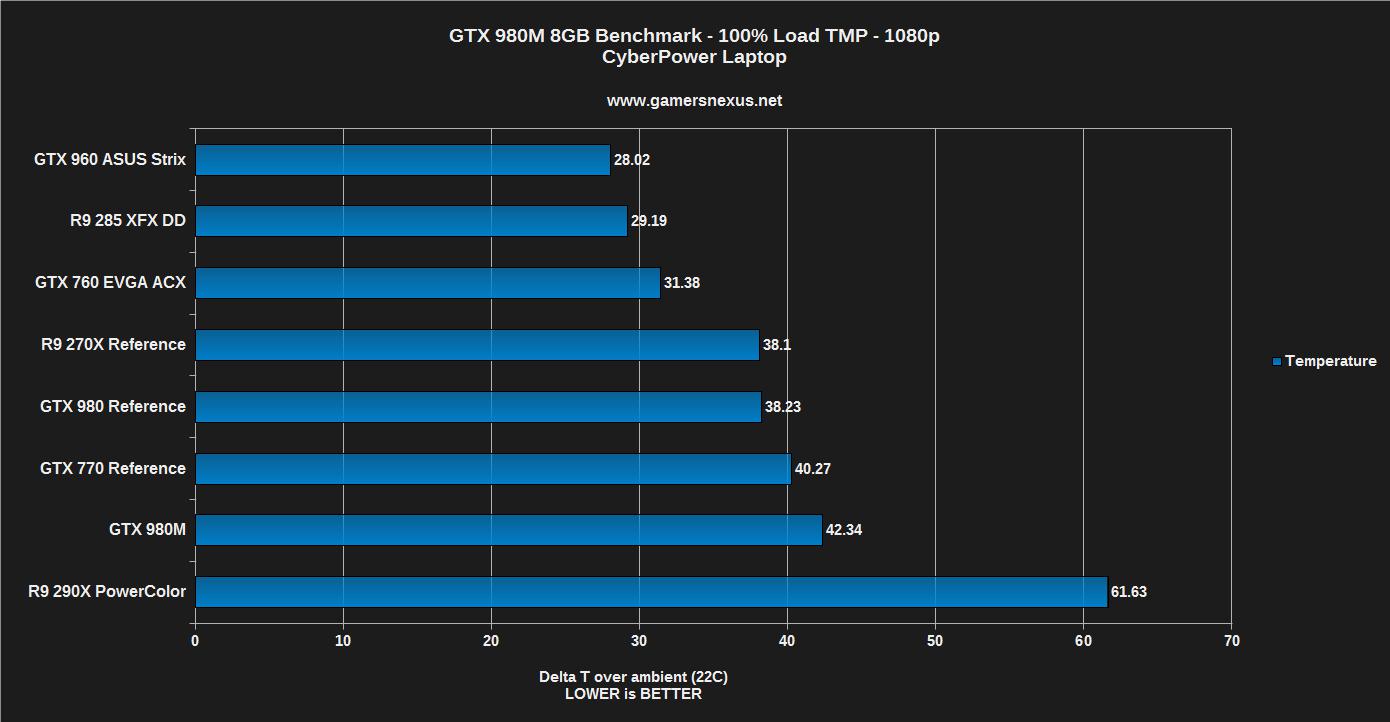 In extended game testing, we're able to get about 84 minutes (1 hour, 24 minutes) of battery life out of the Fangbook III. When testing battery performance, we started the GRID: Autosport benchmark and set it to loop, then logged the laptop's uptime with no charger attached. Note that gaming performance throttles heavily when operating on battery, as above.

Although not mentioned explicitly in this review, the Fangbook III HX7-300 is also a capable video rendering platform. Videos were rendered in record time on the laptop, but we'll produce fuller benchmarks on this in future reviews.

As for its gaming prowess, the Fangbook III HX7-300 is more than capable – it dominates gaming tasks. There's no question that the Fangbook is a desktop replacement, primarily because it is only slightly more portable than a desktop, but it does run games about as handily.

Users of the Fangbook are not people who will be moving around frequently. The only significance of its status as a laptop is that it can be moved between the workplace and home or to LAN events with friends. This isn't something you're going to want to lug around more frequently than that, and you're always going to need a flat, solid surface to establish as a base camp. If that sounds like it fits your use case scenario, the Fangbook III is a pretty easy buy for media production professionals (it made our lives extremely efficient for video rendering at conventions) and high-demand gamers. If you need something more portable, this definitely is not for you. Perhaps consider units like MSI's GS30 Stealth or CyberPower's Fangbook Edge series.

A Disclaimer on laptop reviews: Laptops age. Fast. We only test these over a period of a few weeks, so we won't be exposed to potential flaws in thermal or display cable routing design that may arise, as often is the case in many gaming laptops.

You can read more about the Fangbook III we reviewed here: https://www.cyberpowerpc.com/system/Fangbook_III_HX7-300_Gaming_Laptop