The HyperX PCI-e Predator SSD is fairly simple in its execution: Kingston packaged its M.2-2280 Predator SSD with a PCI-e adapter card (about $10 more), which runs traces from the M.2 disk to the PCI-e interface on a matte black PCB. The adapter hosts little logic, with the modular and user-serviceable M.2 SSD standing solely responsible for all the solid-state technology, including the NAND Flash and SSD controller. To this end, Kingston's adapter solution is an interesting one, bolstered by the allowance of user service to the M.2 disk; if a user later upgraded to an M.2 motherboard, it'd be easy to ditch the card and move to an M.2 host interface. Kingston isn't the only company that's caught on to this, either – ADATA, Plextor, and PNY could all be working on similar devices, based on past discussion.

Then there are native PCI-e SSDs more akin to the old RevoDrive, like Intel's new 750 NVMe SSD ($470) that hosts the NAND and controller on the actual expansion card. We hope to review similar competing devices in the near future.

This review benchmarks Kingston's new HyperX PCI-e Predator SSD against existing SATA solutions like the 850 Pro. We look at Photoshop workloads, gaming performance, file copy workloads, and more. Until we've received review samples of competing PCI-e SSDs, we can't make a direct comparative analysis of same-interface devices. In the meantime, you'll get an idea for performance and speed offered by M.2 via PCI-e.

The street price of the Predator PCI-e SSD is expected to stand below $1/GB, likely listing close to the following numbers:

Some devices are already listed on Amazon by Kingston's official account, though retailers are expected to sell the cards at lower prices in short order.

The new SSD deviates from a previous SandForce allegiance – though does not preclude concurrent SandForce utilization – and opts for Marvell's 88SS9293 controller. Plextor is using the same controller in its M7e M.2 SSD, showcased at CES simultaneously with the HyperX Predator.

Marvell's Altaplus 88SS9293 (“*9293”) controller is a four-lane, eight-channel flash processor built for the M.2 market. The controller supports capacities not exceeding 512GB in M.2, ensuring a capacity ceiling that the Predator will not immediately exceed (though increases in capacity are expected). The X4 controller is compatible with 1ynm MLC NAND (see: NAND Types definition).

Unlike the SandForce FSPs, Marvell does not show favor toward certain data types – like compressible or incompressible data – and has less focus on data entropy.

The HyperX SSD's initial sample hosts Toshiba A19 (19nm) Toggle NAND, a 64-gigabit die with four Flash modules on the PCB. Here's an image from our SSD architecture post that helps explain how a generic eight-channel controller communicates with the Flash modules:

Note that the above is using a sample architecture, so it is not the same as this SSD. The anatomy is the same, though.

The demand for an alternative to SATA comes at a time when SATA III SSDs are meeting the after-overhead limitations of the interface, resting approximately around 550MB/s. At this point, even mid-range SSDs perform effectively identically to high-end units like the 850 Pro when strictly considering speed; to this end, speed is no longer a differentiating factor in SATA SSD selection, giving way to endurance and security features.

As X4 controllers have rolled-out to M.2 SSDs, we again see the interface allow headroom for improvement in speed, reviving a critical differentiating performance metric for comparison. NVMe SSDs, like Intel's impending 750, boast similarly increased interface throughput that forces the device to be the chokepoint for performance, not the interface itself.

High-end devices – again, like the 850 Pro – offer encryption methods and business-class data protection features to justify a higher price point. Endurance is among the most important metrics to consider when selecting an SSD, but the nature of endurance testing effectively ensures it is impossible for longevity analysis in time for an initial review. We would recommend Tech Report's now-concluded SSD Endurance Test for further information on this front. We can base endurance projections and speculation on controller and NAND selection, but other aspects – like firmware and electrical components – also impact lifetime of the device.

What does the PCI-e Adapter Do For Me that M.2 Doesn't? 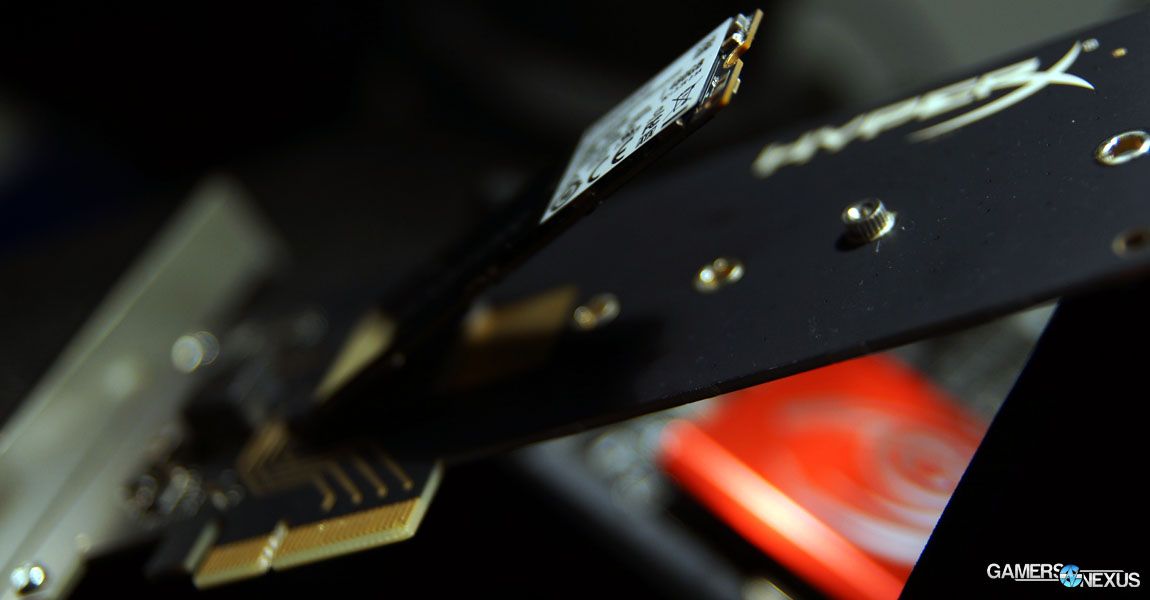 Users with a capable M.2 motherboard may instead find themselves considering an M.2 unit without an adapter. In these instances, it has been shown through testing that some Z97 configurations yield lower M.2 performance than PCI-e performance, showing that X99 systems with greater lane availability to M.2 devices yield the most comparable performance to the PCI Express-adapted SSD.

Those without M.2 ports on the board see immediate and obvious gains: The PCI-e adapter brings M.2 speed SSDs to a system which could otherwise not natively support them, consuming a PCI-e port in the process. This eliminates usability in most micro-ATX or mini-ITX motherboards that need the slot for a video card, but given the relatively high count of PCI-e slots on ATX boards, makes for an easy, high-speed storage solution without eating into components too deeply. The ability to expand into lane-intensive SLI/CrossFire is diminished when assigning four of the 24 available Z97 lanes to an SSD, though multiplexed boards would make more allowances for such configurations.

Please continue to page 2 for test methodology and benchmark results.