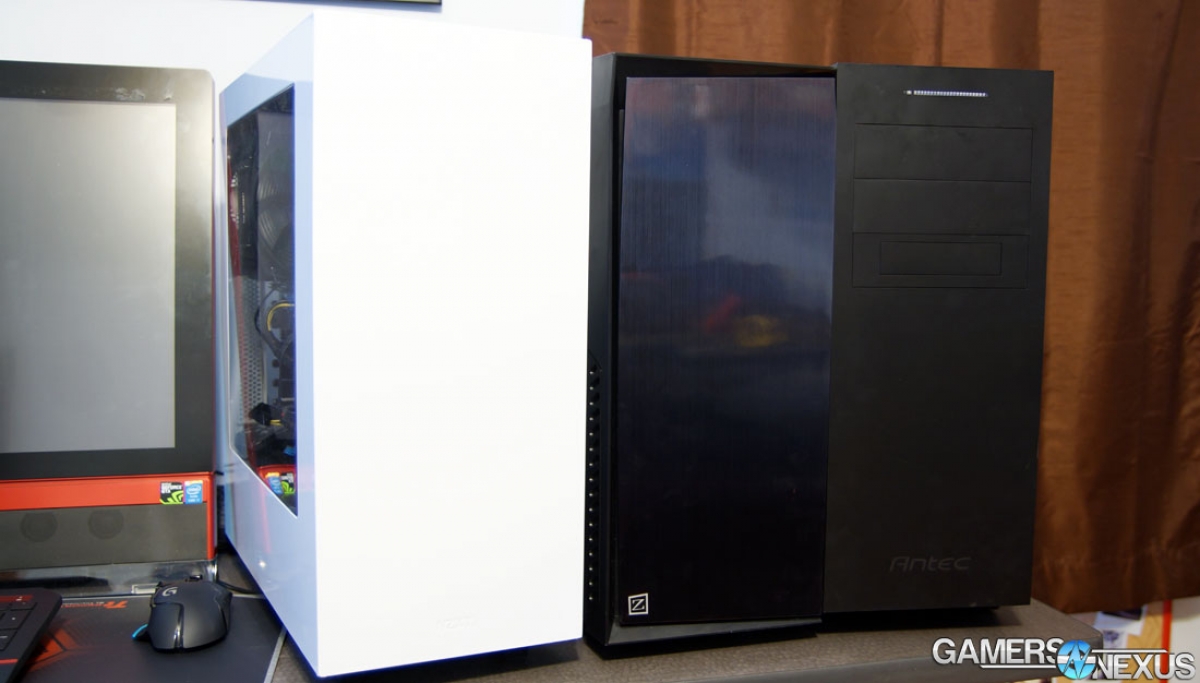 We tested using our updated 2015 case test bench, detailed in the table below. Our thanks to supporting hardware vendors for supplying some of the test components.

Conducting thermal tests requires careful measurement of temperatures in the surrounding environment. We control for ambient – which is set to a constant 21C – and then produce charts using a Delta T(emperature) over Ambient value. This value subtracts 21C from the measured output, producing a delta report of thermals. AIDA64 is used for logging thermals of semiconductor components.

All case fans are manually configured to their maximum throughput using BIOS. This forces testing of case fan performance in addition to the case's air channeling and airstream design. This also ensures minimal variance when testing, as automatically controlled fan speeds can reduce reliability of benchmarking. The CPU fan is set to use a custom fan curve that was devised in-house after a series of testing; setting the CPU fan to its maximum speed can limit the disparity shown from case-to-case as the CPU cooler is extremely efficient, and will create a ceiling for thermal performance if bottlenecked.

The video card is configured to run at 55% fan speed at all times. Stock clocks are used. We employ an ASUS Strix GTX 960 (~$200) for the case test bench when using more budget-class cases. Additional SLI and high-end, high-heat cards are used when conducting testing on more expensive (higher-end) cases.

Prior to load testing, we collect idle temperature results for two minutes to determine the unloaded cooling performance of a case's fans and air channels. Thermal benchmarking is conducted for twenty minutes, a period we've determined sufficient for achieving equilibrium. The over-time data is aggregated and will occasionally be compiled into charts, if interesting or relevant. The equilibrium performance is averaged to create the below charts.

Note that we removed the top panel cover for the Zalman R1 case during testing, as it obstructs airflow and drastically impacts performance.

None of these three cases had stellar cooling performance, which wasn’t unexpected given the price range; however, the results did back up some of our conclusions—firstly, that the S340 is the best case of these three (and still would be, even if it didn’t have the best cooling performance), and secondly, that the Zalman R1 and the Antec P70 are for all intents and purposes the same case, except for some unfortunate features of the R1. There are many reasons why the R1 might run hotter than the P70, but it seems likely that it’s because of the decision to obstruct the airflow of the front fan with a door and the strange design of the top vent.

These tests were done with the GPU and CPU under 100% load and none of the cases got dangerously hot, but it’s clear that the S340 is marginally better for keeping your components at a safer operating temperature.

The P70 and R1 are nearly within margin of error in some tests, a result expected due to the identical chassis (though the R1 suffers in some aspects thanks to its front door and other obstructions).

Conclusion: Either Get an S340 or One Of These Other Cases 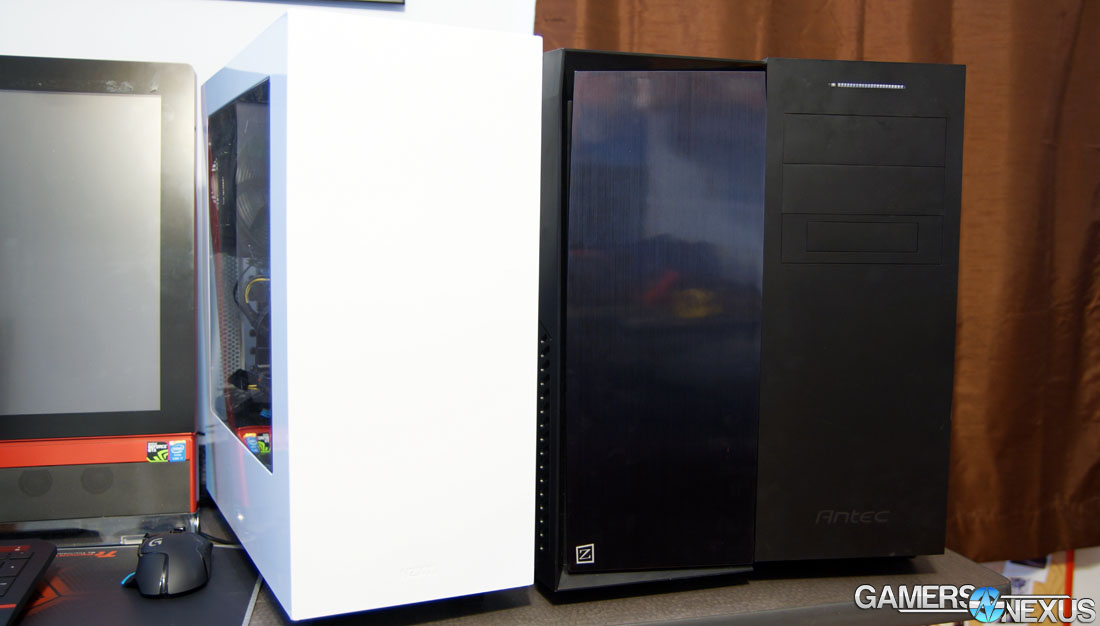 There's no doubt that NZXT's S340 ($60 to $70) is the clear victor between these cases, but recent changes in price – namely the P70 and R1 offering MIRs that bring them down to ~$40 – mean that it's no longer a fair price range comparison. Even at $40, it's impossible to recommend the Zalman R1. Within $5-$10, Corsair's Spec 01 can be had and offers superior design quality, using an identical chassis to the 100R unveiled at CES. NZXT's Source 210 is priced identically to the post-rebate R1 and, although not a particularly accommodating or powerfully-cooled case, is superior in build quality.

Regarding the R1, for most users, we'd strongly suggest considering a slightly boosted case investment – an extra $5 to $10 will go a long way. If the case is available without a discount of some kind, it's almost offensively expensive for the level of quality present.

Antec's P70 is a different story. The interior still has some oddities (floppy bay, for instance), but presents a much cleaner and more functional exterior. The lack of a pointless front and top door are encouraging, and the less obstructed fan intake / exhaust makes for marginally improved cooling over the R1. The Antec P70 isn't a terrible case; it's fine. After rebates, the $40 price is mostly agreeable, though we'd still prefer some other options on the market (like the Spec 01), but it's not offensively bad. At $60, the case loses instantly to nearby competition – like Corsair's 200R ($50 - $60) or NZXT's S340 at $10 more.