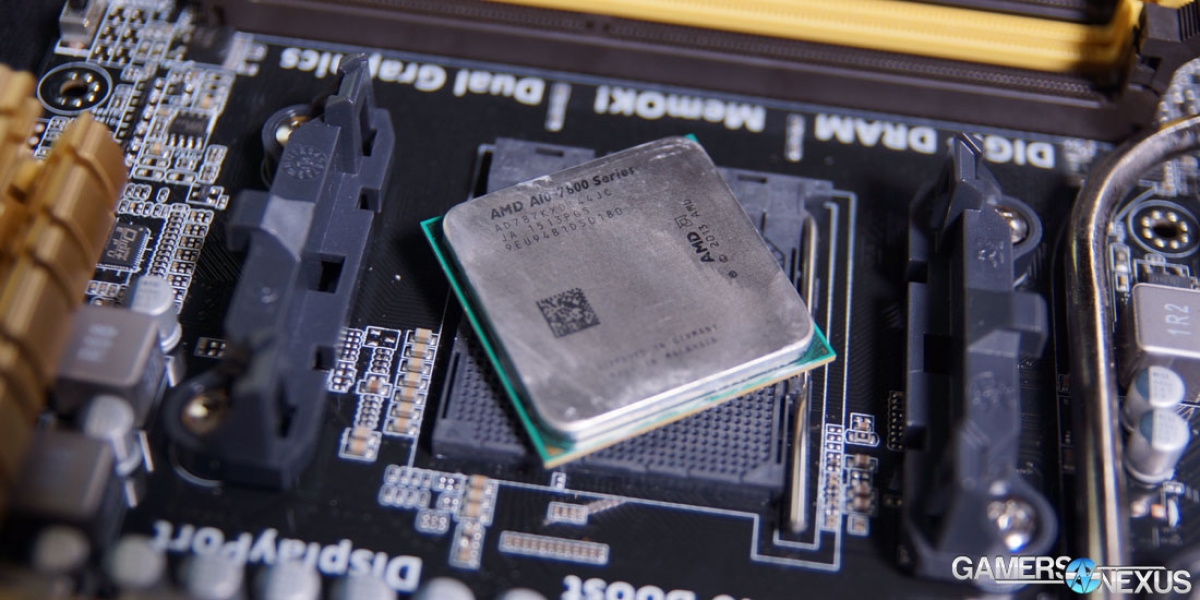 AMD's APUs have seen a retargeting of late toward eSports titles, which famously front lower-fidelity graphics in favor of highly performant gameplay. To this end, the 7870K is marketed most heavily as an affordable solution for the likes of CSGO and DOTA2, two wildly popular Valve eSports titles. 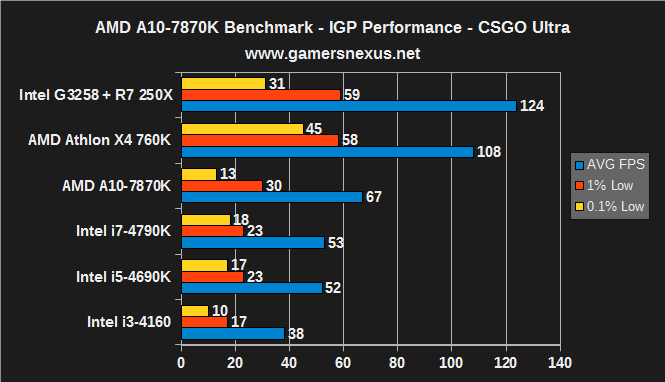 For these tests, we had CSGO's settings maxed-out (anti-aliasing disabled) to high / very high settings. The resolution was 1920x1080, as in all tests conducted on the 7870K.

It is clear that the lone A10-7870K is capable of maintaining a playable average FPS >60, though we see hits to performance in the 1% lows (30FPS) and 0.1% lows (13FPS). Coupling a lower-end CPU (G3258, 760K, 860K – not listed) with a low-end GPU still outputs superior performance, though requires a greater power envelope. There are some games where a lower-end CPU combination proves sub-optimal, as we'll find momentarily, but CSGO benefits greatly from a dGPU. The game is not particularly processor-intensive.

Intel's HD4600 IGP outputs impressive performance, having generally straggled behind AMD's integrated graphics solutions. The IGP is just shy of the desired 60FPS range. AMD designates a significantly larger portion of its die to the GPU components of its APUs, though, and is something that should be reflected in our CPU-targeted charts.

We tested DOTA2 with the sliders set to “medium” and other qualities as defined above. 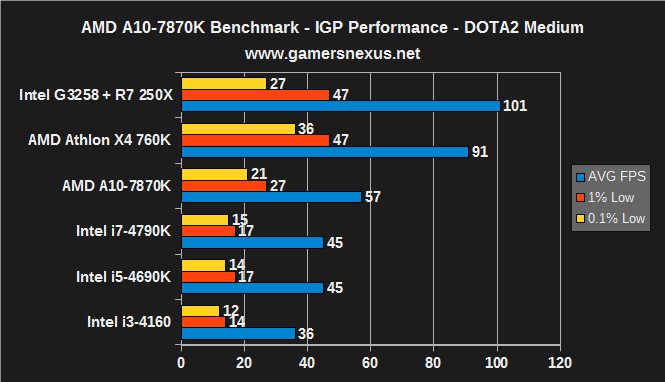 The 7870K runs just shy of 60FPS in this ESL tournament match. The scene tested represents a worst-case scenario, with several heroes and mobs on screen simultaneously. There is a substantial performance improvement from the CPU + cheap dGPU solutions.

As in other tests, the 760K exhibits performance gains over the G3258 strictly in the territory of the low metrics, where the limited threading capabilities of Intel's dual-core solution show themselves.

Set to “normal” across the board and with AA disabled, GTA V does what we've seen it do in the past – it kills the G3258. This chart reinforces our dedication to measurement of frame variance over the period of testing.

Despite a chart-topping average FPS performance, the G3258 ($65) + R7 250X ($96) get destroyed in the 0.1% lows, something we've seen consistently when testing modern, heavily threaded titles. The dips are shown through semi-frequent (a minimum of twice per 30-second period) and hard “drops” in framerate. This is a good example of where a 760K or modern 860K, despite lower average performance, would actually be the better processor.

But we're not reviewing either of those CPUs today.

The A10-7870K is, plainly put, entirely unplayable when faced with GTA V even at its lowest settings. At 1080p, it is simply not realistic to expect a fluid framerate in GTA V on AMD's best APU.

GRID: Autosport was set to “medium” for IGP tests, but changed for CPU testing. 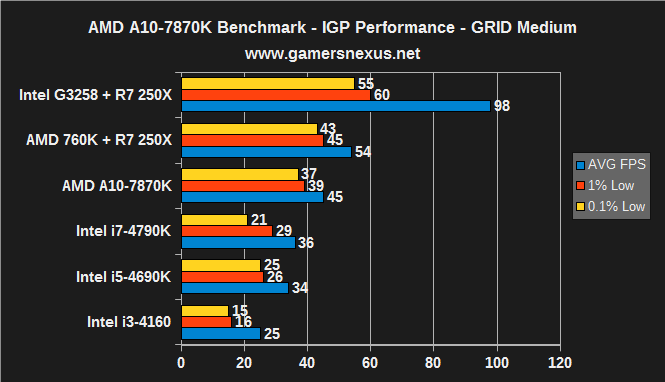 The 7870K is just shy of a preferred 60FPS, but is playable at 45FPS with its impressively consistent 1% and 0.1% lows. Dipping to “low” settings would allow playable gaming with GRID: Autosport. GRID is a title that was heavily supported by Intel at launch, featuring items like self-shading smoke and other Intel-only features, and expresses significantly bolstered performance on the G3258 over the 760K.

The FireStrike Physics test is almost entirely loaded on the CPU, making for a solid baseline analysis tool of CPU rankings from raw gaming-related processing. The combined test merges physics and graphics processing elements to hammer both the CPU and GPU. 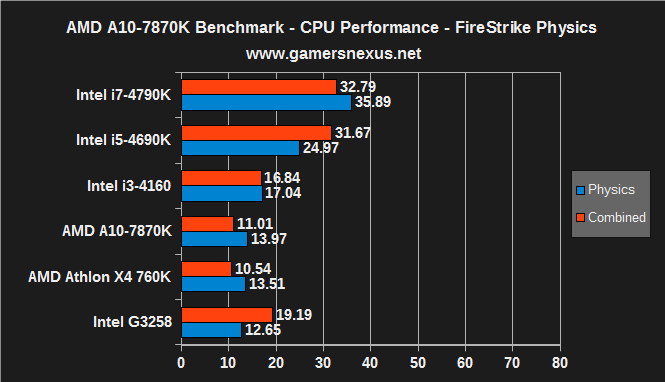 The numbers are represented as FPS output of the physics processing passes. Note that all tests used a GTX 980 Ti as the AIB.

The 7870K performs well for an APU, but is only marginally better than AMD's significantly cheaper CPU-only 760K / 860K solutions. This is because the 860K processors are effectively the same part as the 7870K, but ship with the IGP disabled.

There's some CPU-bottlenecking going on in Shadow of Mordor, as shown below: 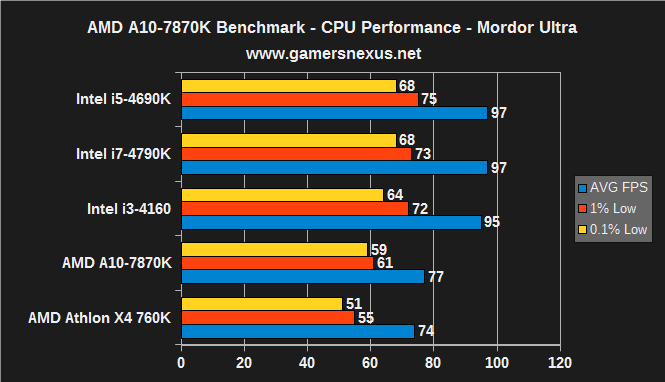 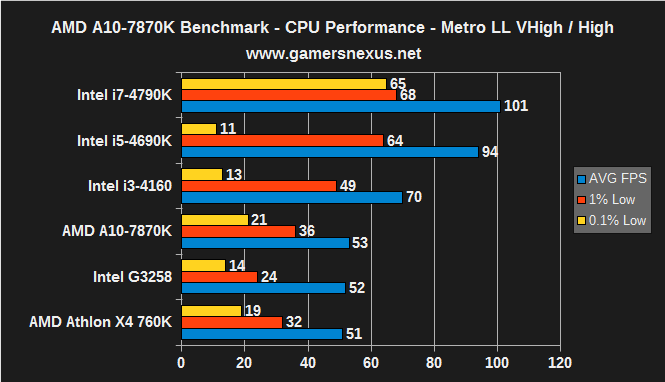 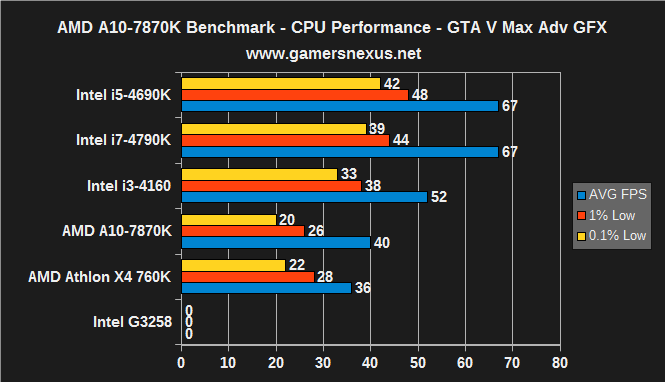 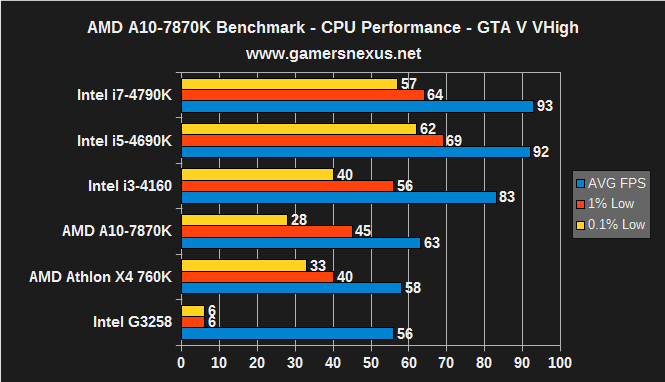 The G3258 fails miserably with higher settings for GTA V, producing unplayable lows at “Very High” and crashing with advanced graphics. The 7870K bottlenecks hard compared to the i7 and i5 CPUs (which seem to hit a GPU bottleneck at ~67FPS).

The game is playable using a dGPU and 7870K with no advanced graphics enabled. The CPU is still a large bottleneck to the GPU when compared against Intel's Core-series offerings, including the i3.

GRID, again, shows a heavier Intel bias than some other test titles. 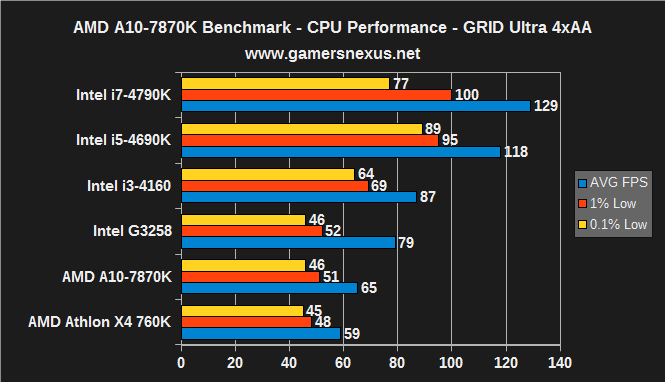 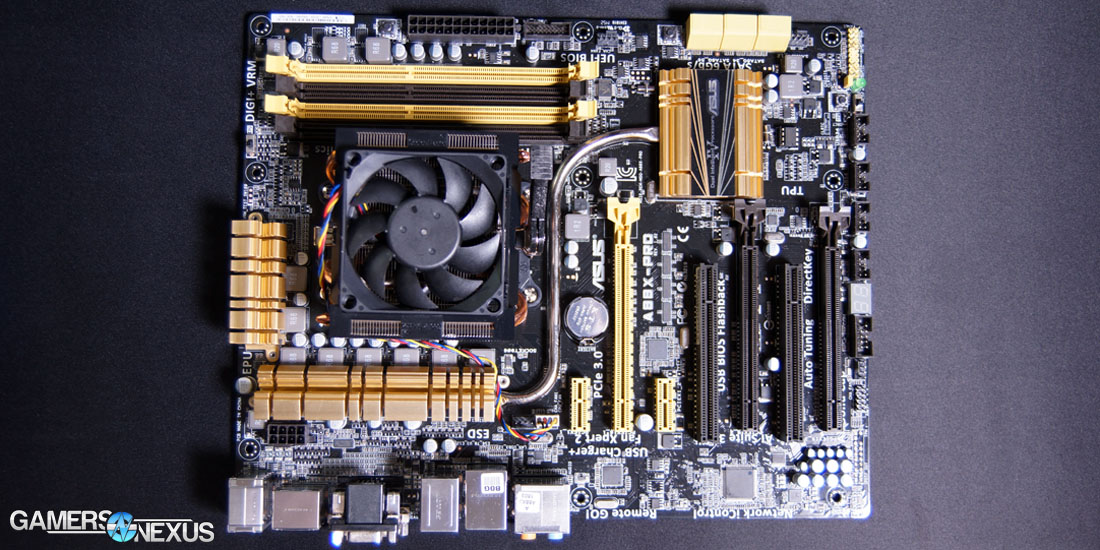 First: Note that we are analyzing the A10-7870K strictly from a gaming perspective. Results in professional applications and video media consumption were not recorded or tested.

We can come to a few very clear, hard conclusions with the A10-7870K APU; those conclusions are split between “will buy a dGPU” and “will not buy a dGPU.”

It isn't until we eliminate video card purchases that the A10-7870K becomes appealing, and that's somewhat expected. The current $150 price-point of the A10-7870K means that it's dangerously close to CPU + GPU pricing at the low-end. For users building ultra-portable boxes in impossibly small enclosures – I can think of very few that exist without AIB support – an APU makes more sense as it removes the requirement of an expansion card. If the pricing of the A10-7870K falls and stays at the current one-day sale price of $120, we can make a much stronger case for the purchase of a single-unit APU over the dGPU + CPU combo; that price drop would create a ~$30 to $50 gap in build cost, which becomes substantial to budget builders.

We're impressed with the performance of the 7870K's IGP, but struggle to recommend the device to most gamers at its current pricing given the CPU + GPU price similarity. It is advisable to avoid the G3258 in scenarios involving heavily threaded games (like GTA V), so we'd then suggest an 860K + low-end GPU instead; if that ~$20 to $30 price climb is too big, the 7870K makes sense. If the 7870K were to fall and stay at the ~$120 mark, we would confidently recommend the unit for ultra-budget builds. This also helps (albeit marginally) lower the power envelope.

DOTA2 and CSGO performance is strong enough that only a 7870K will suffice in unmodded scenarios, if you really want to avoid a dGPU.