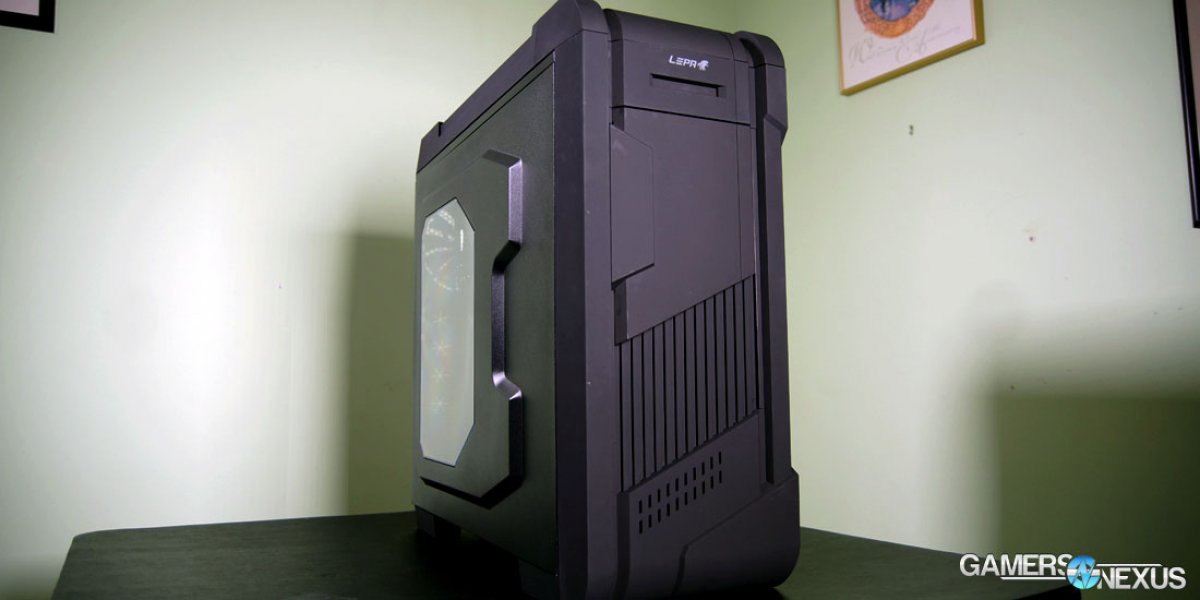 Enermax, LEPA, and Ecomaster are all confusingly tied together in a web of brands and companies, but they can be effectively thought of as a single entity. We were recently offered the new LEPA “Lenyx” case for review, a $160 E-ATX full-tower unit that uses a rubberized paint aesthetic.

In response to the offer, I warned the company that I may dislike the case based on an initial product overview. From my quick preview, I advised, it looked as if the case made heavy use of plastics, something I've grown to dislike over the years. The Enermax representative assured me that the photos didn't do the enclosure justice, emphasizing the high-quality application of rubberized paint and again offering the unit for review. I accepted.

This review of the LEPA Lenyx full-tower looks at ease-of-installation, build quality, aesthetics, extras, and thermal performance in benchmarking. We'll also go over cable management and design strategy. The LEPA 801 Lenyx case has an MSRP of $160 and is presently sold at $171 via Amazon.

Starting with the specs:

The plain specs are pretty simple, but LEPA adds a couple of extras that are more worthy of note. Covering the basics, the fan ships with three pre-installed fans: 1x 140mm rear, 1x 200mm front, 1x 200mm top, and space for expansion in the bottom (1x 120mm realistically, though 2x 120mm advertised). 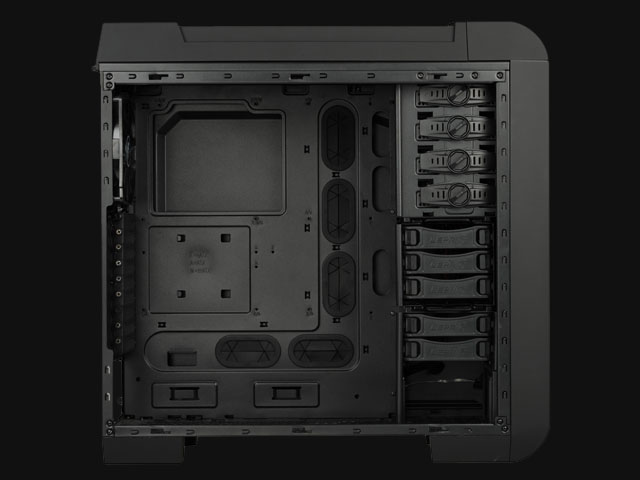 The super-charger USB port increases delivered amperage to mobile devices considerably, pushing 2.4A. For reference, my phone's charger – a Moto X – pushes 1.2A. Doubling the amperage diminishes charging time, but it does so with downsides. Pushing higher amperage through a Li-ion battery will result in a weaker charge with less staying power (consumption is faster). This also impacts the long-term viability of the battery and is aggressive on the Li-ion cells. We recommend only using “super-charger” ports when desperate for juice and on short notice. The super-charger port is marked with an orange header.

A magnetic headset holder is a welcomed inclusion with the LEPA case and clings to the side of the enclosure.

The hot-swap SATA port protrudes from the front of the chassis – potentially a hazard to less-than-careful individuals – and allows for immediate connection of internal SSDs for storage. It's not necessarily a common use case, but one that we step through regularly in the lab where storage is passed around.

The fan controller steps power assignment in three levels (low, medium, high) to the fans, impacting speed and brightness of the LEDs. 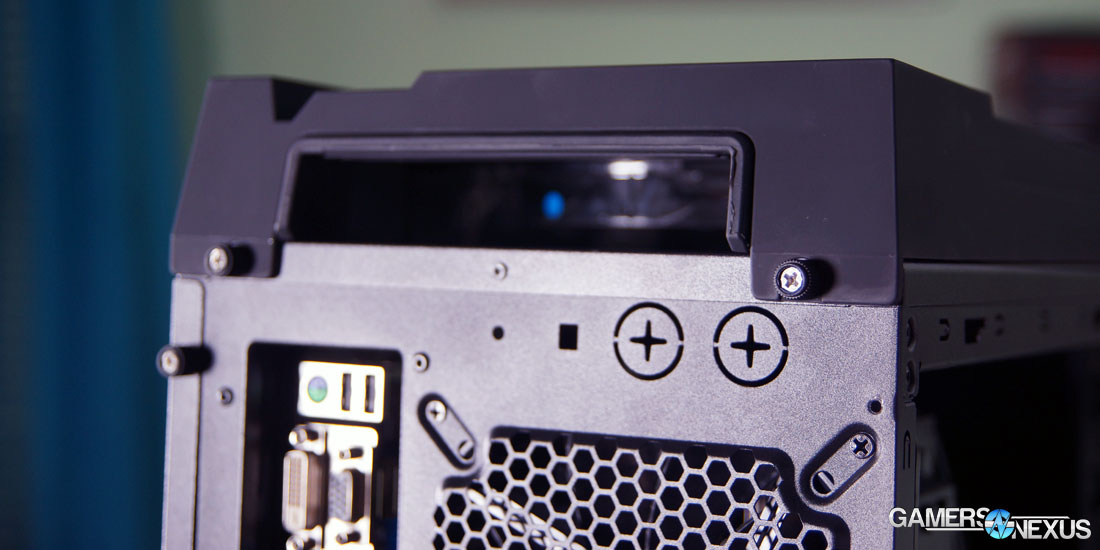 LEPA's Lenyx case is embellished with soft-grip rubber plastic paneling front-and-top, but uses more standard steel side panels. The case ships only in black, though the side panels and rubber-coated top and front panels differ in color depth. This is a common issue we've seen with cases that deploy differing materials for the side panels; because the soft-grip rubber generates a uniquely matte and gray-black appearance, the black-coated metal is darker and more light-reflective. It's not a big deal and is hardly noticeable to any but the most neurotic users, once built, but is something worth highlight. The only real way to avoid this is to ditch the soft-grip coating, something that we actually ended up liking.

The top panel is slotted for air exhaust, offering enough clearance above the frame to support most radiators. Radiator fans can be installed below the frame without interfering too heavily with cable routing.

Enermax took some steps to improve the portability of their large case by adding a steel handle to the rear, strategically located under the top panel and encased in a rubber grip. This makes for comfortable, easy movement of the case without risking damage to the paneling. With most cases, carrying the entire system by its plastic top or front panels can inflict damage (ripping the alligator clips out, mostly). Enermax's clever inclusion of a handle bypasses this. The company's decision to encase the handle in a rubberized grip further demonstrates attention to detail.

Split into a three-quarters and a one-quarter section, the top panel breaks free from the chassis in two chunks: Top-rear and top-IO. The top-rear panel is locked-in by two thumb-screws and mounted to rails, a non-standard assemblage that makes for trivial removal of the panel. This eases radiator and top-fan installation or changes, and is something I sincerely hope more cases will adopt. The front section is mounted by alligator clips and plastic and, sadly, is easily broken (as we found out). Most users will never have to remove this section of the enclosure, so it's primarily a non-issue; for those who do remove it, exercise extreme caution and apply a minimal amount of downward force to prevent destroying the plastic clips. The top-front panel is used strictly to house the fan controller PCB, I/O PCB, and cabling.

The rubberized finish is an expensive one and is a big contributor to the premium $160 MSRP. The coating eliminates the cheap plastic feel that plagues cases with similar paneling designs – so that's a plus – and feels smooth to the touch. As a bonus, the material is fairly resilient to both fingerprints and scratches, something we found untrue of the Noctis 450. 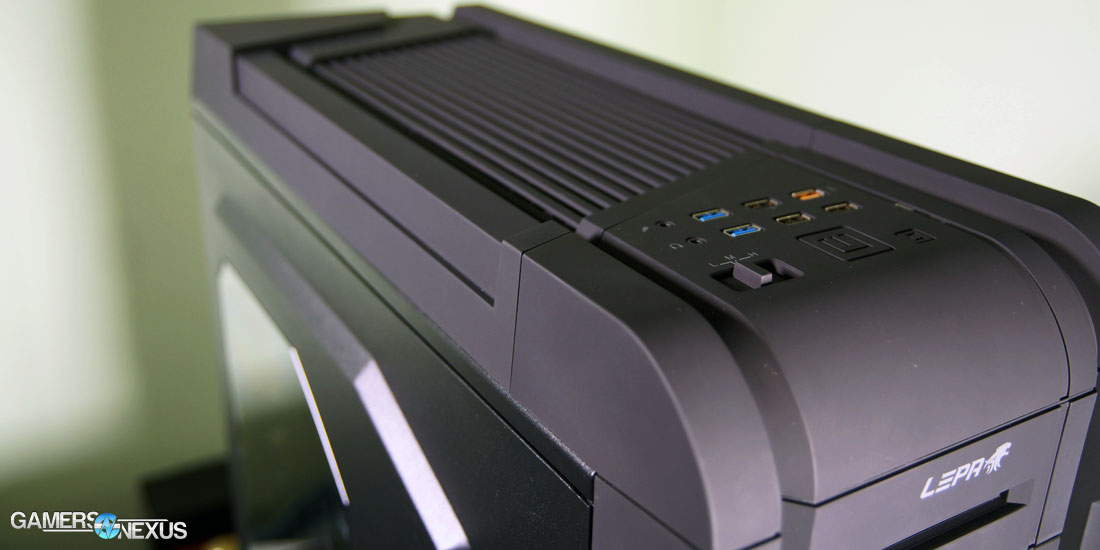 Cable management in the LEPA 801 Lenyx case is easy – but the art of cable routing has become ubiquitous since the days of the Antec 900. Nothing quite comes close to NZXT's S340 when it comes to cable management.

Enermax gets a few things right where it counts: Cable management pass-throughs exist on the far perimeter of the board tray, ensuring larger ATX boards (ASUS Rampage IV, for example) and E-ATX boards can be cabled; cut-outs in the board tray allow for vertical pass-through of CPU power cables; behind-the-tray routing is deep (aided by the bezeled side panel), ensuring no destruction of SATA connectors when the doors are sealed.

I do wish that Enermax had an additional (fourth) cable pass-through for CPU power, though. This is something that a lot of companies miss, the exceptions generally being NZXT and Corsair. Enermax has a cut-out on the far left and far right, but none in between. Some motherboards – again, the ASUS Rampage IV as an example – have 8 to 12 pins of juice located due north of the CPU socket. The current layout forces awkward routing at sub-optimal angles to cable such a configuration.

Enermax has a few other small, but important features to aid installation. A cut-out on the left support beam of the chassis allows for head-on contact of the screwdriver to the expansion slot screws, an oversight on numerous cases. This ensures the user is not at risk of cross-threading an expansion slot.