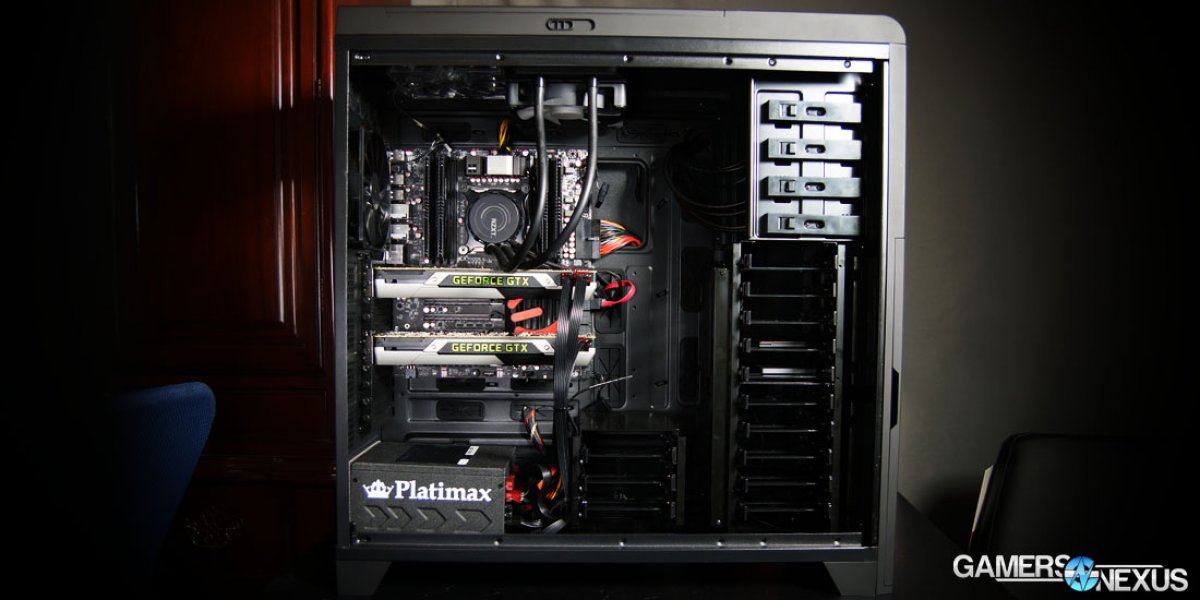 Rosewill's self-dubbed flagship enclosure is outfitted for ATX through HPTX form factor motherboards. The enclosure includes 2x 140mm front fans (no LED) on hinged doors, 2x 140mm top fans (blue LEDs), and 1x 140mm rear fan (no LED). Because the tremendous width of the case, there's a gap between expansion slot screw mounts and the side panel of the case; Rosewill has utilized this space for large grills, positioned above the video cards to provide a negative draw-point for the positive pressure intake.

The case can fit an additional 1x 140mm top fan, 2x 120mm bottom fans (but would require a small PSU and removal of a drive cage), or 1x 140mm bottom fan. The top fans could be swapped for 2x 200mm fans instead. A mid-case radiator mount is also present, just behind the drive cages.

Rosewill B2 Spirit Use Cases 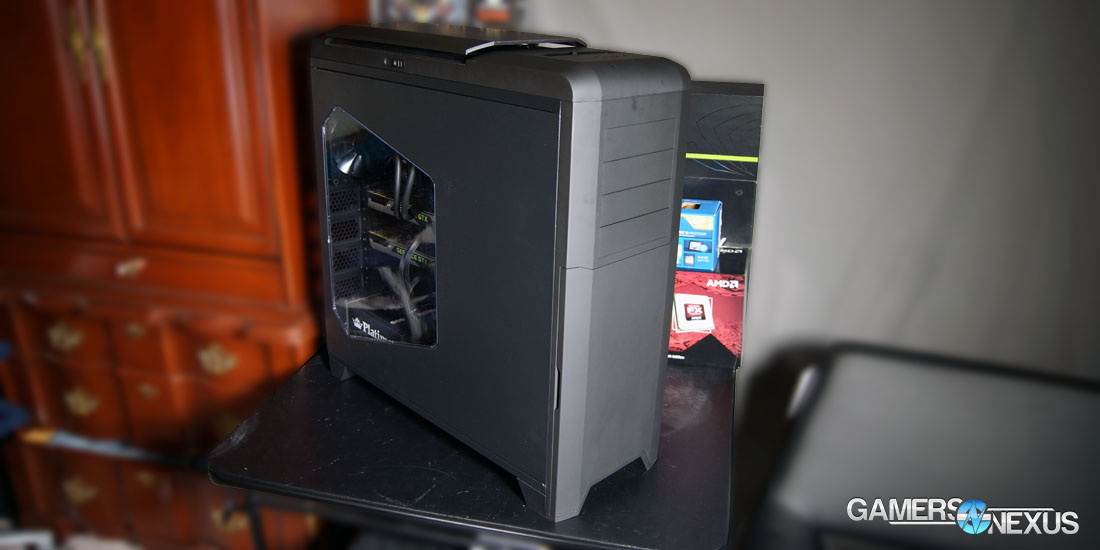 The B2 Spirit uses a lot of aggressive phrases in its marketing: “Battle cruiser,” “incinerate your opponents,” “stealth.” It's clear that the vision for the case was one meant to match the B2 stealth bomber, though the case is anything but undetected at 24” deep and nearly 40 pounds in weight.

Tooling for the B2 Spirit allows installation of form factors scaling past ATX and into E-ATX, XL-ATX, and HPTX sizes. HPTX had a brief stint around the era of Skulltrail dual-CPU boards, and measures in at 13.6” x 15” (a fair bit larger than the ~12” x 12” ATX standard). The gargantuan size of the case means that it's easily capable of quad-SLI installation (with the right board) and that it's got a lot of room for storage devices.

In a sense, this almost makes the B2 Spirit feel like it's part of the “old guard” of cases – there's been a recent decrease in physical size, removal of drive bays (optical and 3.5”), and a shift toward minimalism. NZXT and Fractal are among the best examples of this shift. That doesn't invalidate the existence of more traditional, massive cases, though, and there's still a market for users who need HDD bays. The official render rig for this very website hosts five drives, and it will soon expand.

The B2 Spirit acts sort of like a server case. In that regard, the best use case scenarios would be those in which a system builder requires drive slots (of which there are 13), those who use large boards, and anyone who wants space and cooling for multi-GPU configurations.

That said, the B2 Spirit isn't for anyone – not nearly: The case is big enough that it is effectively relegated to floor positioning; it's immobile for LAN gamers; it's unnecessarily large for the vast majority of dual-drive, single-GPU gaming PC builds. In these instances, a $70 to $100 enclosure – the S340, the Fractal Define cases – would be better than the B2 Spirit. 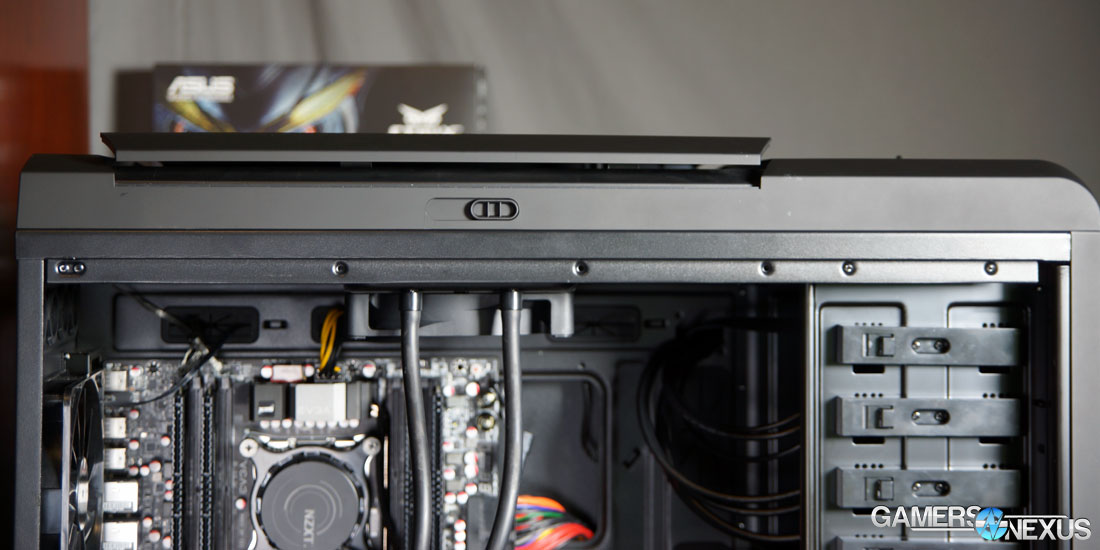 Similar to the LEPA Lenyx we just reviewed, Rosewill's B2 Spirit uses a soft-grip rubberized coating for the case exterior. This material adds to the production cost of the product – rubber is a lot more expensive than paint – but it adds a more premium quality to the feel. The case is fingerprint- and reflection-resistant resultant of the soft-grip coating. It feels nice to the touch and blends into the background a little more readily, despite the large size. The side panels are steel and painted with a normal black paint, not the soft-grip rubber. This means the front, top, and side panels aren't perfectly matched in tone, reflectivity, and color depth – but they're close enough that it's basically irrelevant, unless you're sitting the thing under studio lights.

The panels are all flush against the frame and flush with one another, something we (depressingly) haven't found true for every case. A few unique, mechanical features provide a bit of showmanship to the case, but without going too heavy on the “1337 gamer” aesthetic that we often see. One of those features is the “convertible” top panel, which extrudes from the case with the press of a button. This provides more airflow (we tested with the panel closed and opened) at the cost of additional noise escaping from the case. It's a mechanical switch, something Rosewill's been fond of since the Thor V2 and the Throne cases. 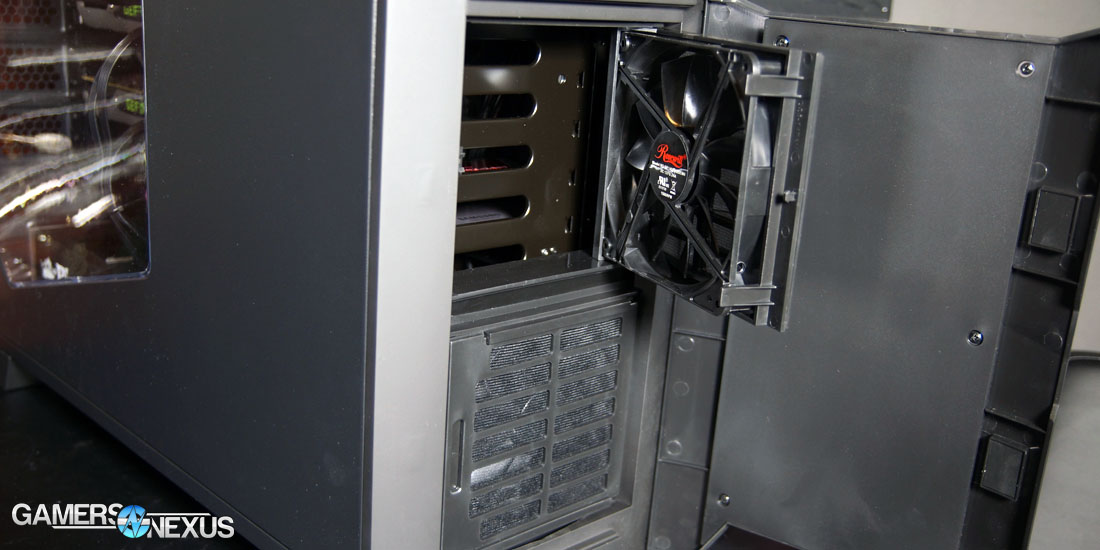 The second mechanical feature is pretty simple, but a nice touch. The front 2x 140mm fans pop-out with an eject button, using a hinge to swing outward. The added function is easier access for cleaning (filters are installed) or fan replacement. These fans are covered by a discrete, flush, hinged front panel shield.

System installation is trivial. The Spirit doesn't necessarily do anything revolutionary to ease the build process, but it's big – and that means maneuverability. The case fits everything well and with almost too much extra room on the sides of our ATX EVGA X99 motherboard, but that's the biggest board we've got.

A few things struck me as oversights with the B2 Spirit.

For as many fans as it has (and is capable of), it's strange that Rosewill elected not to include a fan hub on the rear-side of the motherboard – especially since there's so much room back there. This would make installation easier and significantly cleaner on the cabling. There are cheaper cases that include this now-basic demand. It just seems like something no one thought to include.

Another strange oversight pertains to SSDs. The B2 Spirit can fit 13 drives. For these drives, it uses standard, plastic drive sleds with holes drilled for bottom-screw mount SSD installation. The sides of the sleds use the semi-ubiquitous steel bolts with rubber housing. If installing an SSD, it is impossible to line-up the holes to the drive without removing these steel bolts – an oversight, considering an SSD is just 2.5” and an HDD is 3.5”, so there should be room for both without modification of the existing mounting hardware. It doesn't impact function, but is an extra step that would have been mitigated by centering the SSD mount holes rather than right-aligning them. Just weird.

Cable length is also an issue, something that's true of nearly any massive, E-ATX ready case. This is more a matter of adequate PSU or cable selection than the case design, though we've seen some good solutions in the past. At a minimum, as NZXT did with the Phantom 820, it'd be good practice to include an 8-pin extender for the CPU power. It's nearly guaranteed that stock 8-pin cables won't reach that far, and the inclusion of an extension is just good user service.

Unfortunately, a 140mm radiator will not fit in the rear slot due to a curved bezel protruding from the expansion slot area (though it is also not advertised to fit), so we had to go with a top-mount. The front radiator position is far enough away from the fans (and covered by drives) that we'd recommend using a top-mount instead, as the direct fan contact will drastically improve dissipation performance of the radiator.